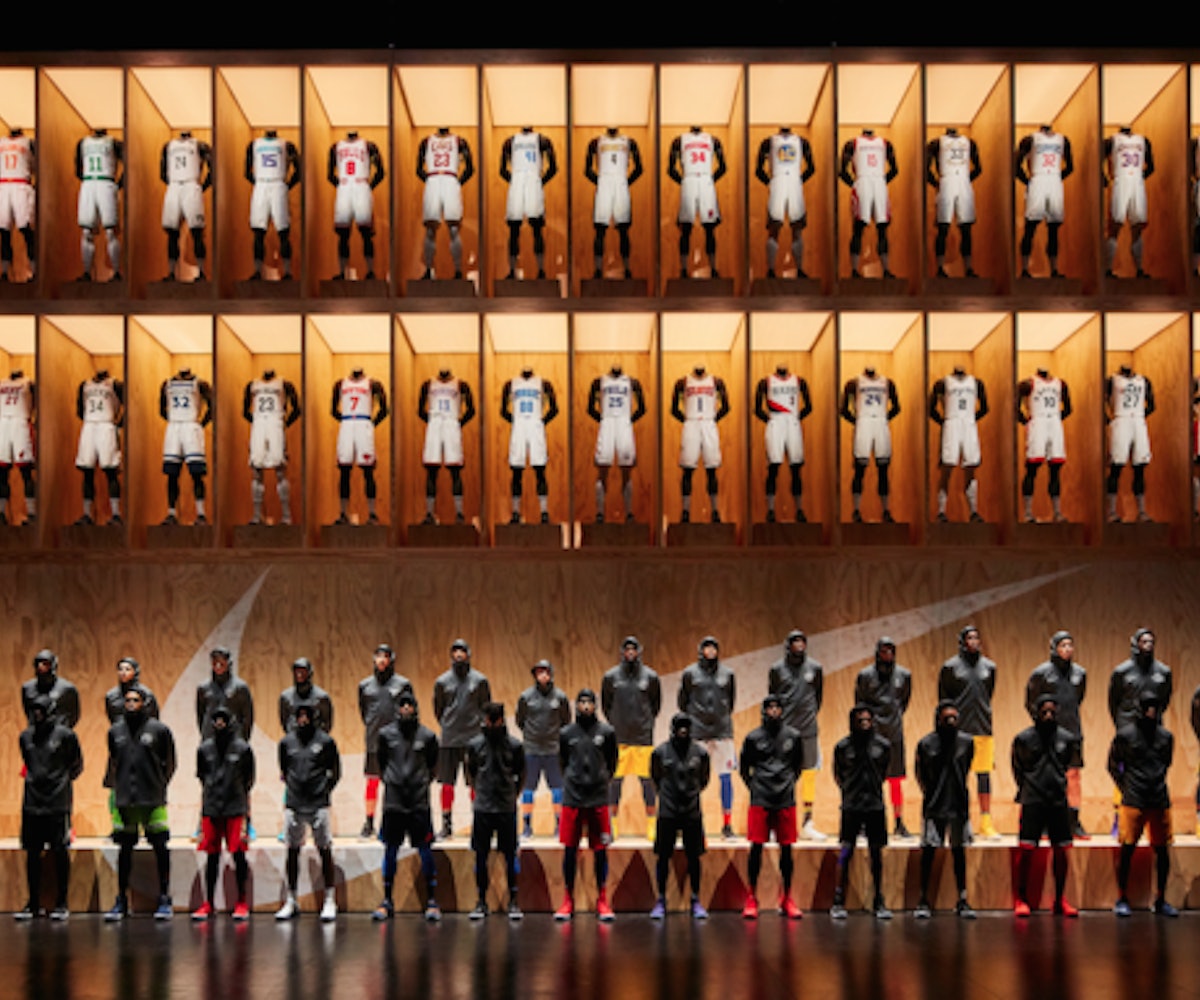 As Jerry Seinfeld once noted, jerseys are essentially what gives a sports team its identity. “You know, I love the Giants, but who are the Giants?” Seinfeld famously told David Letterman. “I mean, it’s different guys every year. Teams will move from city to city. You’re rooting for clothes, when you get right down to it. I want my team’s clothes to beat the clothes from another city.”

To most casual observers, the NBA uniform is a mousetrap product—you might be able to build a better one, but why bother? It’s a just uniform. But to Nike, the jerseys were another area in which the NBA could be dramatically improved. The sneaker and apparel giant won an eight-year contract to design the league’s uniforms in 2015, but this is the first season in which its jerseys will first be worn.

On September 15 in Los Angeles, Nike unveiled these modern uniforms at a blowout event. Their Statement Edition uniforms are essentially alternate jerseys, typically the most stylish (or at least outré) of the team’s designs. The event itself, which took place at Sony Studios, featured a performance from Travis Scott, who performed wearing a Chris Paul jersey and self-designed sneakers. Reporters dodged monolithic video boards, playing reels composed from highlights and famous Nike commercials, as the boards moved through the space.

Those are nice details, but what about the uniforms? Well, they’re different—and much better. “I like them,” Lakers forward Julius Randle told me. “They’re lighter.”

Parker also said that the Nike team drew inspiration from its experience designing USA Basketball jerseys—though these are more heavy-duty to withstand the rigors of the NBA season—and college jerseys, to arrive at the current construction. That includes details like moving the shoulder seams off the top of the shoulder and onto the back, all in the name of creating a friction-free playing experience.

Also making their debut are the Nike Therma Flex Showtime Warm-up Jackets, which will be the first hooded product worn on the court. The hood enables players to keep their heads warm—eliminating the towels you see people hang on their head for temperature regulation—while also allowing players to hear and see their coaches and teammates. That’s because there’s a mesh patch in the hood, which is both unobtrusive and utilitarian. The jackets themselves, like the jerseys, are sleek on the inside and optimized for shooting jumpers during warm-ups.

The uniforms are also much more technologically advanced. There’s a NikeConnect chip in the jock tag which connects to Androids or iPhones using near-field communication (NFC) and enables a fan experience that goes beyond just wearing a jersey to the game. I had wondered aloud why I, a grown adult man, would buy a new jersey to wear to a basketball game. This is the best argument yet.

Using the NikeConnect app, you hold your phone near the jock tag, and it curates an experience customized to both the team and specific player. (Yes, it even works for Under Armor pitchman Steph Curry.) The content delivered includes shareable GIF and video highlights featuring mostly the player whose jersey you’re wearing, news from around the league, and exclusive game day experiences. Eventually, the app will also offer Spotify or Apple Music playlists based on what athletes are listening to on game day.

“The same thing that KD [Kevin Durant] is listening to on game night, you’ll be able to download those and get in the same mindset as your athlete,” said senior director of product and experience Brandon Burroughs.

They’ll also connect to your NBA 2k console game. If you buy a Kevin Durant jersey, he’ll be unlocked for you in the game. Each time you check in on game day, you’ll unlock skill boosts and upgrades within the game.

All of this is nice, but the proof is in the look. This was a chance for every team to redesign the look and feel of their uniforms. Some delivered, others more or less fell on their face.

The Golden State Warriors had by far the best alternate jerseys of any I saw. The new logo said “The Town,” a reference to Oakland, which was accompanied by the oak tree glyph that residents will recognize from every street sign. The tree is a fantastic touch, both in terms of the local connection and visual appeal.

Another standout were the Denver Nuggets’ new threads. Though the rainbow alternates have been ditched in favor of a simpler silhouette, they’re still connected indelibly to the city and its surrounding mountains. The yellow is also a nice hue, calling to mind the gold rush.

The Indiana Pacers’ uniforms evoke a basketball and are suitably utilitarian for the Hoosier state. You could picture Hickory High donning these as Gene Hackman coaches them from the sideline. They're simple but effective, like the ideal of Indiana basketball.

The only truly bad ones were the Timberwolves neon monstrosities. Not only are they vomit green, but they turn the forest of Minnesota into a weirdly garish experience that I wouldn’t wish on my worst enemy. That being said, maybe we’re all victims, as the team seems poised for their first playoff run in years.

But despite that misstep, Nike, who has for years been the dominant brand on the feet of NBA players, has now positioned themselves to become as the future of uniforms in the NBA.