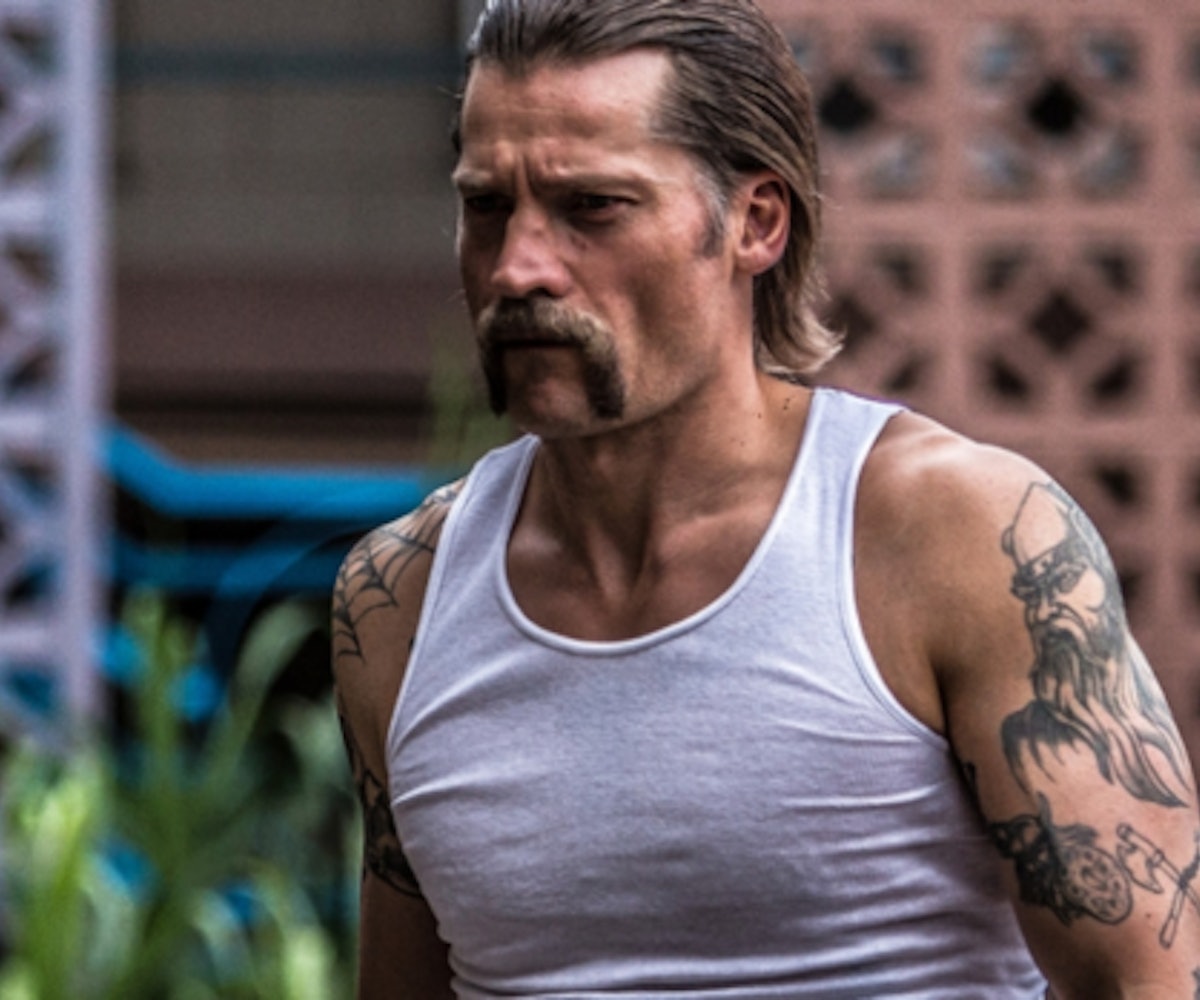 Just one week after his character Jaime Lannister was seen drifting to the bottom of Blackwater Rush, I found myself sitting across from Nikolaj Coster-Waldau talking about a project unrelated to Game of Thrones. That's because the busy actor can currently be seen in select theaters or On Demand in Shot Caller, a pitch black prison thriller in which he plays a family man, Jacob, who gets sent to a maximum security prison after killing his best friend in a drunken car accident and transforms himself into a ruthless killer in order to survive. With this role and with his already iconic portrayal of Jaime Lannister on HBO's mega hit, Coster-Waldau is proving himself to be an actor of chameleonic abilities. In person, he's nothing like the brooding knight he plays on Game of Thrones or the tortured gangster he plays in Shot Caller. His voice is pitched higher, and that difficult-to-place accent reveals itself as a product of his Danish upbringing. He also speaks very, very quickly. Here, we chat about the social implications of his new film, those HBO hacks, and his dream Game of Thrones scene partner.

Is this movie pushing a social message about the American prison system, or is it just a thriller about a family man trying to survive in prison?

We wanted to tell a great story that engages you, and then hopefully, you'll go, "Wow, that was a cool movie, that was some dark shit." Obviously, it’s fiction, but it is very much based on facts. We lock up nonviolent offenders with very violent people, and that's not a good recipe. This country locks up more people than any other country in the Western world, and it's an enormous waste of money, resources, and human lives. Personally, I hope people will think about that when watching this movie.

Did you speak to any real-life prisoners who have undergone similar transformations to the one your character went through?

I spoke to a kid who had been a shot caller [gang leader]. He got in when he was like 19 or 20. He'd done really stupid stuff like carjacking and stealing, but they were all nonviolent [crimes]. He goes in, and his journey was very much like Jacob’s. He wasn't going to be a victim, so he learned to be violent very quickly. And I believe if you commit a crime, you have to serve the time. There's no question about that, but we shouldn't be so stupid as a society. These guys have to come back. It doesn't make sense that we just drop them on the floor. They’re young men.

Speaking of violence, when Jacob commits his first murder, there’s a look in your eyes that looks like terror and excitement and adrenaline all wrapped into one. Is that what you were going for?

When I met that guy, I actually asked if he ever stabbed anyone. He said, “I did many times.” I said, “Shit, well if you don't mind me asking, what was the first time like?” He said, “I didn't want to do it, I was afraid. It was this big guy, and he could kill me, but the fear of not doing it was worse.” So he did it, and said the second the blood started flowing, he felt empowered and in control. He said he wanted to come back to that feeling and did come back to it many times. That's what happened to Jacob. At that moment, he is beyond petrified, but he does it, and it changes him forever.

Jaime is one of the most morally ambiguous characters on Game of Thrones, and Jacob is the same way. Are these your favorite kinds of roles to play?

I find these parts interesting, but I find human beings interesting in general. When I watch something that I love, it's because it has those elements. We all fuck up, we all make mistakes, we all try to do our best most of the time. One of my favorite comedies in the last few years was Louie with Louis C.K. He's such a fuck-up, he tries his best, and it's painful to watch him, but it's human. My point is not that it's dramatic—it's just what I gravitate toward. I don't believe in that whole idea of, "Well, he's a good guy, or he's a bad guy." And I think that is one of the things that makes Game of Thrones so successful, Daenerys Targaryen is the Breaker of Chains. Yeah, fantastic, she's going to do all these great things, but we just saw her burn 10,000 men alive. I mean, that's not nice. Or Tyrion, he’s the hero, but he kills the love of his life. She may have slept with his father, but was that enough to kill her? And he kills his father, who was a real scumbag, but he was already out the door—he didn't have to. And, of course, there’s Jaime Lannister. Yes, he saved a million people—isn't that wonderful—but he also tried to kill an innocent boy, and that's not cool.

It’s like that in life, too. I had a guy who was talking to a friend of mine, and he was talking about Trump, and he was like, “Trump, that guy is so horrible, ignoring climate change and all that, but by the way, I really hope he gets those tax cuts in there, I'm going to fucking make a fortune.” My point is, if someone is a good guy, I always look at that bad stuff, too. No one is all good, and I know myself, I know I'm not a perfect angel.

Game of Thrones is popular all year round, but does it feel different now, while the show is currently on air?

When you walk around on the street, people have just seen you on TV, so it’s a lot more of, “Hey, there's that guy!” So that is different. The last few years have been crazy, the waves are getting smaller if you will. The dips are smaller than they used to be between seasons, but we'll be done in a couple years.

Have the HBO hacks and subsequent leaks been a bummer for you?

No, it's just like, what can you do? What’s funny is I'm from Denmark, and HBO Nordic [which accidentally aired episode six early, causing it to leak online], I know those guys. They fucked up twice—they did last year, as well, and I'm like, "Come on guys, really?" It's almost like I take it personally, like, "Couldn't it have been HBO South America? It had to be you guys?" Because it's not about the hack, it's just stupidity, I think. But no, I don't know exactly what happened, but the hacks are just a distraction. It's more the fact that you know these are the biggest corporations in the world, like the Sony hack, but other companies are hacked all the time, but you don't hear about them because they pay up. We are so dependent on being digital. We might need a turn back to the old days, where you have money in your pocket. The whole idea is that we went through so many email chains and validation and all that with our scripts, and I'm thinking, Why not just give us the script like they used to?

Who's an actor on the show that you would love to record a scene with but haven't?

Well, there are a lot. Me and Kit Harington had one tiny little moment in Season 1, but I would love to meet up with Jon Snow, and I would like them to fight together. [Actually,] I don't want to fight him because I know that would be the end of Jaime Lannister, and that would be really disappointing.