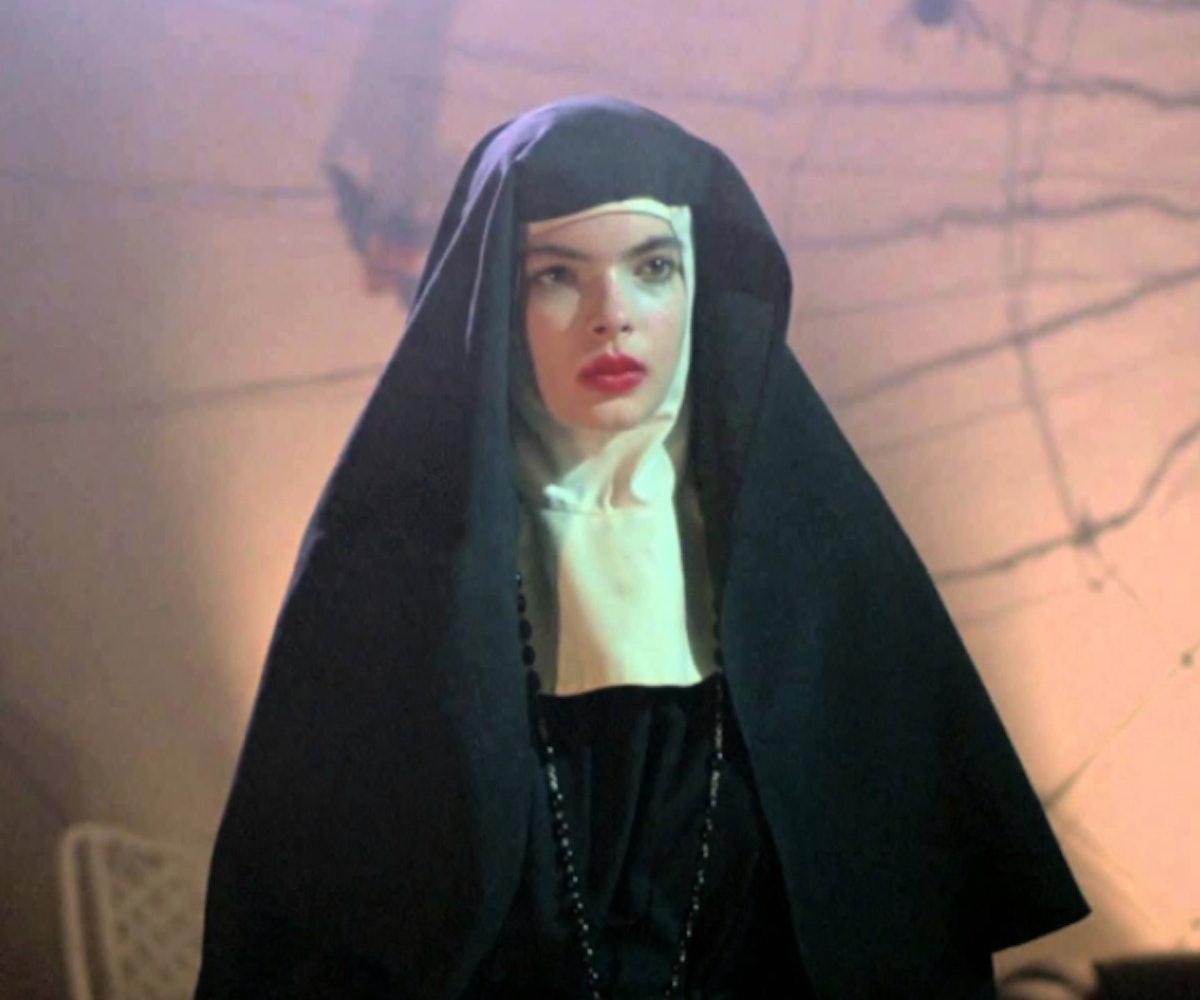 What is this sin, my children? —The Sound of Music

She's a broad. Y'got it? Just a broad! —Sister Act

My earliest memories of nuns involve singing; sitting cross-legged on the floor, one part of a circle of children, in front of a nun playing the guitar and singing folk songs. While this might sound like a scene from The Sound of Music, it was just another day at my school, in which several habited nuns taught—leading preschool classes, directing the annual Christmas theatrical, and teaching us about everything from Greek mythology to the works of Shirley Jackson and the songs of Woody Guthrie and Joan Baez. Although I was Roman Catholic (and not just nominally, but actually, if not permanently), my parents sent me to an Episcopalian school that had been founded in 1950 by a biracial nun, the Reverend Mother Ruth, whose own experience with discrimination led her to prioritize inclusivity within her school community, meaning that it was filled with students from a variety of religious, ethnic, and racial backgrounds and a staff comprising people from all walks of life, including nuns.

While I eventually came to understand that most people's experience with nuns-as-teachers was not as positive as my own, the appeal of the nuns at my school was such that I contemplated (as seriously as one could contemplate anything at age five) becoming a nun when I grew up. The role didn't hold quite as much appeal as my other professional dreams (ballerina and/or pediatrician), but it did contain elements that I found wildly compelling, including the fact that all the nuns at my school lived in a cozy townhouse together on Manhattan's Upper West Side, which seemed—to my incredibly sleepover-obsessed self (because, like, was there anything cooler than sleeping in a bed not your own?)—to be the ultimate, life-long slumber party, in which the nuns probably did the same thing that I did with all my friends during our sleepovers, i.e. dress up in our mothers' clothes and watch Grease over and over again.

In religion, power exists primarily in iconography; the ability to be moved by an image of Jesus, wounds weeping as he dies on the cross, is accessible to all, easily emotionally translatable when compared to any Biblical text. And the iconography of the nun is instantly recognizable for its purity, its image of a woman erased of all but her face, floating in a sea of soft black-and-white shadow, as if she is one of those bodiless babies, destined to float in limbo for all eternity. A nun's very name evokes erasure. And yet, the nun serves as a reminder of the power a woman can wield when she is stripped of her corporeal form, reduced to a face and two hands; everything else remaining a mystery. The nun is, depending on how the light falls, a monster, a masochist, repressed, virginal, a lesbian, a bride, a mentor, an imposter, an enigma; she contains multitudes.

Hollywood is its own religion, and there, too, power exists in the ability to show instead of tell, to embrace the innate mystery of a person and illuminate who they really are—and so it's no surprise that one of the most potent roles for women in film is that of a nun. The history of the nun in cinema is a long and varied one, ranging from those nuns who play the roles of saviors, of outlaws, of confidantes, of oppressors, of victims, and of avenging angels. There are the Nazi-hating, angelically voiced nuns of The Sound of Music; the confused, mysteriously impregnated novice Agnes in Agnes of God; the rambunctious, rowdy sisters of Saint Katherine's Parish in Sister Act; the unwilling novitiate, Suzanne in La Religieuse, who will—and does—give anything to escape her cloistered fate.

What is notable about the cinematic nun is that, compared to the reductive ways in which women are usually portrayed in film, she could, underneath her habit, be anyone, and is, perhaps ironically, singularly removed from the reductive Madonna-whore dichotomy. It's not that she doesn't contain traces of both those traits; it's that she contains traces of both those traits, rather than merely being one thing or the other. And undoubtedly this is because she exists in a world not dominated by men.

It feels almost like a science fiction construct, the idea that women can exist alone, unbothered by the whims of men. But in many cinematic renderings of convents, that's exactly what happens. Men are sometimes present within the walls of the nunnery, but usually in the form of benign church figures, who add little to the narrative at hand. These are men of little consequence, it is clear. It's the women who are in charge. Of course, these fictional women-dominated environments are not automatic havens for liberation—on the contrary, usually, they still suffer from the patriarchal oppression which informs all of Christianity, and certainly dictates the behavior of the nuns serving, indeed married to, an "almighty father." And yet, whereas in the outside world, men would have the multifaceted roles of oppressor or savior, within the nunnery, these positions are filled with women, some of whom work tirelessly to uphold these patriarchal structures, and others who work to tear them down from the inside out.

But perhaps most compelling is the nun who lives outside the nunnery. In Abel Ferrara's Ms .45, a rape-revenge film set in New York City in 1981, Zoë Tamerlis plays Thana, a mute young woman who goes on a rampage against all men, murdering and dismembering them, finally costuming herself in a nun's habit for the blood-filled finale. Thana—the embodiment of the feminized death drive—is not a real nun, of course, and yet in her wide-eyed naivety, which transforms soon enough into a steely detachment and a lustful, pure vengeance, she is evocative of any religious convert; but rather than give her life in dedication to the Holy Father, she is devoting herself toward the disassembly of the putrid patriarchy, and comes into her own in a uniquely divine feminine manner.

Thana as a nun is about as far from what my childhood conception of a nun could be; she is not a member of the preschool-teaching, guitar-strumming sisterhood of my youth. And yet, she is a part of the tradition of cinematic nuns, whose myriad personality traits work to subvert the idea that nuns, that women, are destined to be any one thing. These nuns on films represent female possibility, are icons because of the ways in which they seek to separate themselves from the many things and people who would hold them down. While it is true that, in the real world and on film, many nuns and convents have long served as tools for the Catholic Church's oppressive theology and are thus complicit, if not active, in many of the horrors wrought by the church (think of all the grim on-screen nuns who resentfully fostered unmarried girls through clandestine pregnancies), on film, nuns have the potential to be symbols of revolution, of the dismantling of male power, of women's ability to find strength within themselves.

The appropriation of this particular type of religious iconography by Hollywood, then, is all the more powerful because of how it has been used by the church to oppress women for centuries. It is on film that these women, that all women, can liberate themselves, can choose sisterhood or choose self over living in a woman-hating society. It doesn't always end perfectly, or even well. Freedom—revolution—is a messy thing, but it's worth striving for, whether it takes the form of a collective of women who work to support each other creatively or an avenging angel whose destruction of men leads to her own demise, but not before she gasps out one final word: "Sister!"

NEXT UP
Culture
Jeremy Allen White Has At Least Four A24 Scripts on His Desk
Culture
Aubrey Plaza Directorial Plans Involve Filling The “Female Tim Burton Spot”
Entertainment
Caroline Polachek Announces Album ‘Desire, I Want To Turn Into You’
Entertainment
RM's "Yun" & 9 Other New Songs Out This Week