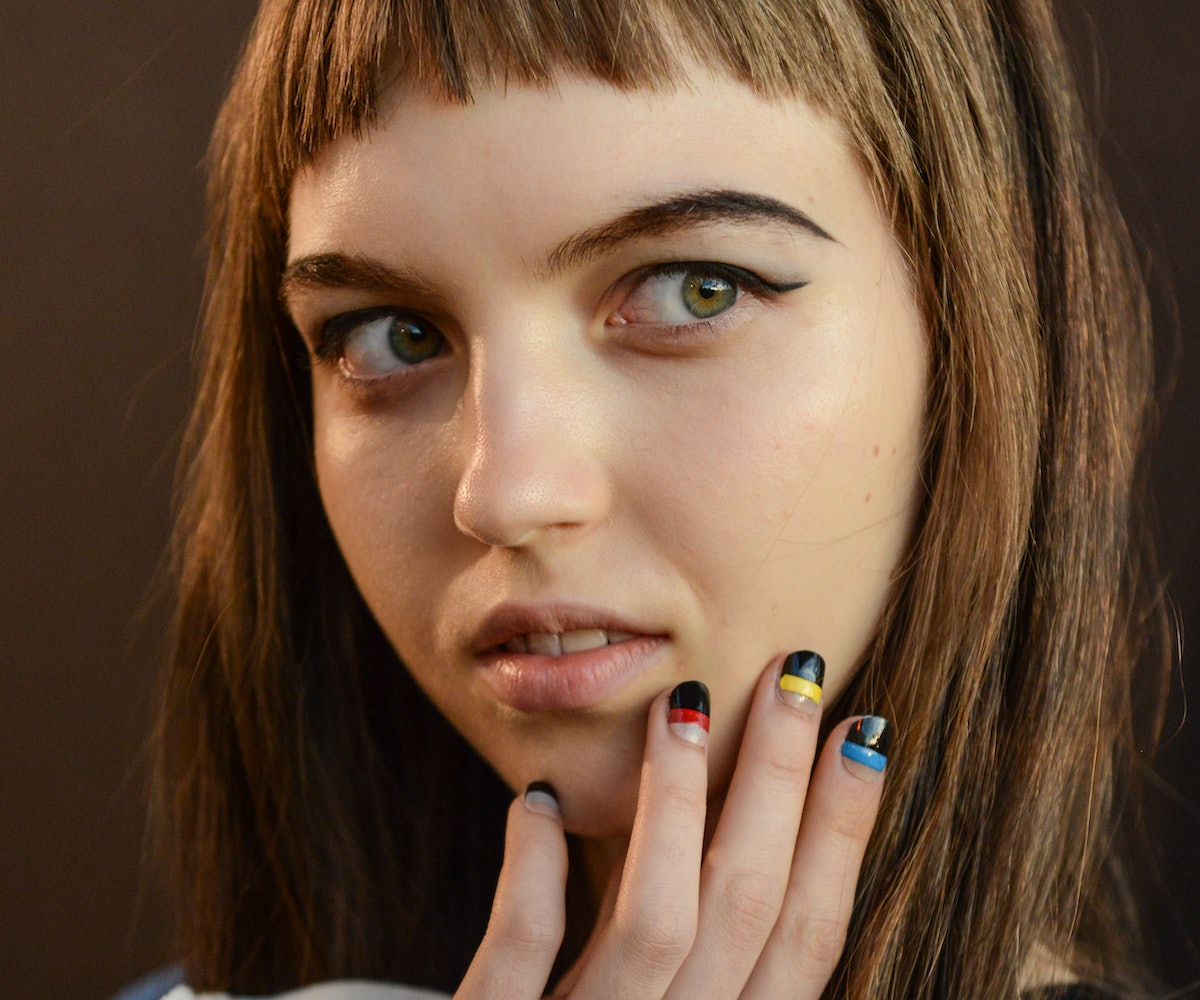 What’s more thrilling than attending a fashion show? Going backstage beforehand to watch the it all come together. From the clothes, hair, and makeup, all the way down to the nails, it's incredible to see a full look come together. Especially because it's the greatest beauty experts who lead the beauty direction for some of the biggest fashion designers out there.

After hearing each artist, stylist, and specialist go in-depth about the work that went into the final looks, I realized I was collecting nugget after nugget of vaulable beauty knowledge. Whether it was a simple hack like using scotch tape to make nail art easier (more on that below) or treating lipstick as an all-over multistick for a flawless, monochromatic look, I now have an arsenal of beauty ideas to try out come spring. Or, let’s be real, like, right now.

Click through below to find out what I learned from some of the industry’s top experts.

Backstage at Creatures of the Wind, lead makeup artist Mark Carrasquillo for NARS Cosmetics gave seven of the models a bold red lip that was super matte, inspired by PJ Harvey. Applying NARS Velvet Matte Lipstick Pencil in Dragon Girl first, he then layered a hot pink blush over the lip, giving the classic color a bit of a twist and a super-matte finish. He also ensures that this technique will make the matte lip last: “It won’t move.”

Another tip Carrasquillo has for long a long lasting lip? “Don’t kiss!”

Backstage at Jason Wu, lead artist Yadim for Maybelline used the Brow Drama Pomade Crayon around the eyes to create contour and definition with just a little bit of color, adding gloss over it (using Baby Lips Lip Balm) to make it a little sexier. “The look ends up being kind of like a summer version of a smoky eye,” he said. “It’s super light, very wearable—even for daytime—but there’s still a sultriness to it, a sexiness to it.”

Backstage at Opening Ceremony, nail artist Naomi Yusada for China Glaze created graphic nails inspired by the collection’s various prints. However, we all know how hard it can be to draw a straight line (especially on our opposite hand), so Yusada suggests bringing scotch tape into the picture.

“It’s so much easier this way!” she said. “First, you paint the scotch tape the color you want to use and let it dry. Once it’s dry, you can cut it into small lines and press it onto the nail—then, of course, finish with topcoat.

Backstage at Zac Posen, nail artist Keri Blair for M.A.C. decided to create a nail look that had some serious dimension to it. Using two subtly iridescent shades (Liquid Pigment Top Coat in Pink Pearl and Green Pearl), she layered coats of each to create a high definition, holographic look.

“The Green Pearl is sort of trapped in between the two sandwiches of the Pink Pearl, so it gives a really beautiful dimensional, layered look to the nails,” says Blair. “It's almost like a dragonfly wing.”

Backstage at Eckhaus Latta, the early sweltering Saturday morning was a force to b reckoned with. However, rather than fight the heat, lead artist Deanna Melluso, supported by the Make Up For Ever team, decided to embrace it. She aimed to achieve a “just woke up” look with extra dewy skin.

Her trick of the trade? Castor oil. She mixed Lip Blush with the oil to dilute the pigment and create a reddish tint around the eyes for a morning after look, and used the oil again by dabbing it all over the face to give the skin an extra dewy sheen.

If you’re a fan of the long-lasting effects of lip stains, get ready for eye staining.

Backstage at Andrea Jiapei Li, lead artist Louise Zizzo and the M.A.C. Pro team created looks that were subtle and minimal, but still offered a bit of contour. While chatting with Zizzo, she told me how she created a stain for the eyes by dusting on shadow over the eye, and then wiping away with a moisturizer dipped brush. “The stain is long-lasting and has great wear, especially in the New York heat,” she says. “And you won’t feel heavily made up.”

For Andrea Jiapei Li, they used subtle beige tones such as Saddle, but we’re so down to try this with more vibrant colors.

You can (and should) wear your lipstick on your eyes

Leave it to legendary Pat McGrath to come up with interesting ways to wear your makeup—such as, wearing your lip color on your eyes like she did at Anna Sui. Inspired by all things Americana—with an added touch of rebelliousness—McGrath used CoverGirl Outlast Color And Gloss in Deep Burgundy (launching this January) to give her models a wine-stained lid, and then used the same shade on the lips and even slightly blended into the cheeks.

We’re always down for a monochromatic makeup look and making a product multi-purpose, so we know what we’ll be stocking up on come January.

Thickening spray is the secret to the “wet look”

So, we can’t deny that the wet, slicked back look was definitely a major runway trend this season, seen at Eckhaus Latta, Altuzarra, Thakoon, Jason Wu, and more. However, when it’s a million degrees outside, like it was the day of the Eckhaus Latta show, pulling off a wet look that doesn’t dry up or feel gross is pretty hard to achieve.

Michael Forrey, Sassoon Salon creative director, lead the hair look for the show that morning working with everyone’s natural texture to give them an effortless, “just woke up” look. Using Sebastian Professional Texture Maker and Sebastian Professional Liquid Gloss, he created an oily and damp look that still felt natural.

When asked how to achieve this IRL without the hair feeling, well, gross and oily, he says, “When the hair is wet, just towel dry it and let it dry more naturally. If you want to get more texture out of it, use a thickening spray, let it air dry and just scrunch it in your fingers. You can add a cream or some kind of pomade at the ends to make them look wet.”