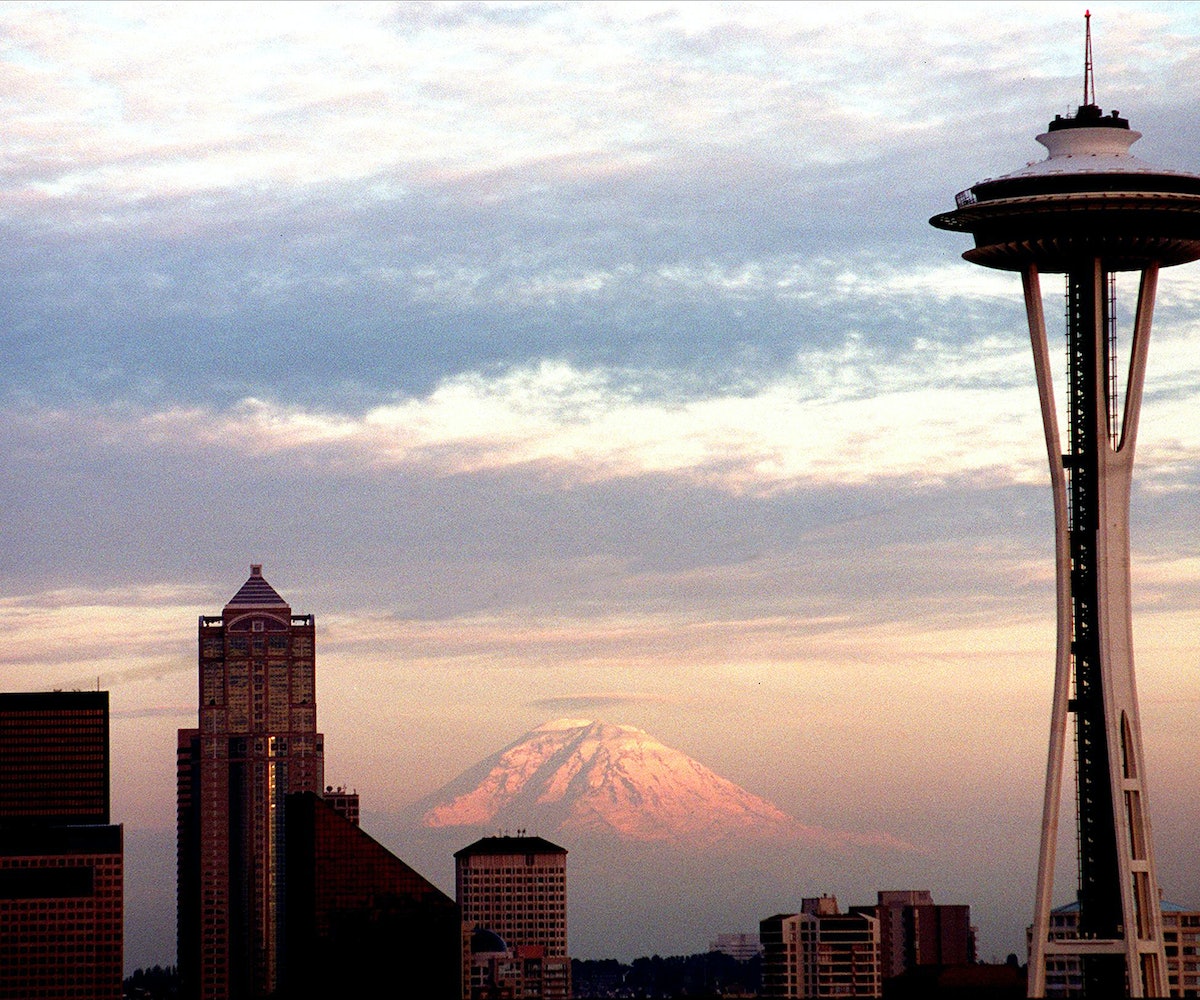 Seattle is one of the most beautiful cities on the planet, thanks to its privileged position of being surrounded by lakes, sounds, bays, rivers, and every other body of water imaginable. And on a clear day, when the sun is out, the views of Mount Rainier are staggering. But that’s the thing: On a recent visit to Seattle, the sun barely shone, and mighty Rainier was nowhere to be found, hidden behind clouds. In fact, it rained a lot, as it tends to do in Seattle, especially in the fall. But believe it or not, the weather is part of this booming city’s many charms (that’s another thing you’ll notice about Seattle's expansion and increasing popularity—the construction). Thankfully, there are many indoor activities that Seattle has on offer, namely lively restaurant and bar scenes, as well as some awfully rad stores. The following is just a sliver of where to go should you find yourself in the Emerald City.

Where to Stay: Kimpton Palladian Hotel

Balancing old-world elegance with modern pizzazz, this conveniently located hotel is just steps away from Seattle’s Pike Place Market and many of the city’s other must-visit landmarks. Housed in a historic building that was formerly the Calhoun hotel, the Palladian feels luxurious without feeling stuffy. Whimsical paintings of Seattle icons (like Kelsey Grammer and Dave Matthews) dressed in military garb point towards a playfulness that carries over into the rooms (your pillow might just have Ricky Gervais’ smirking face on it). The dimly-lit Pennyroyal bar is classic and cozy, perfect for grabbing a drink before taking in a show at the neighboring Moore Theater (also a historic landmark), and the downstairs restaurant Shaker + Spear (low-key one of Seattle’s better seafood restaurants).

Where to Eat: Un Bien

This purveyor of hulking Caribbean sandwiches is the brainchild of brothers Julian and Lucas Lorenzo who took their father’s recipes after he was forced to close down his very popular sandwich shop Paseo in 2014 (it has since reopened). Those sandwiches include ingredients like marinated pork shoulder “slow-roasted until it falls into succulent morsels,” generous caramelized onions, pickled jalapenos, and a slightly crisped baguette. If gluten isn’t your thing, rice bowls and salads are also available. In the warmer months, tackle the sandwich on one of the communal outdoor picnic tables and pretend you’re in the islands.

Where to Eat: The Walrus & The Carpenter

Just about everyone in Seattle will recommend the neighborhood of Ballard, and for good reason. Tucked away in the nautical enclave, The Walrus & The Carpenter is a highly attractive space that made its name as an oyster bar, shucking locally-sourced gems for a hungry clientele. But chef Renee Erickson goes beyond the bivalve with inventive, yet familiar fare like grilled sardines, steak tartare, and scallop crudo with Korean chili. Wash it all down with a tall boy, some crisp chardonnay, or an expertly crafted cocktail if that’s your thing. Oh, and unless you arrive right when the doors open, be prepared to wait. It’s that kinda place.

Where to Eat: Westward

Westward is Seattle in restaurant form. This beautiful space on the north shore of Lake Union takes full advantage of its environs with an outdoor area on the waterfront that includes Adirondack chairs, a fire pit, boat dock, and dazzling views of the Seattle skyline in the distance, Space Needle included. The interior is just as special, airy, and sleek with an open kitchen and is Northwest to the max. Original chef Zoi Antonitsas left the restaurant last year, but her Mediterranean influences still dot the seafood-focused menu.

Where to Drink: Unicorn

The owners of this Capitol Hill drinking establishment took the carnival theme and ran with it. The result is a sensory overload of pinball and skee ball machines with supremely kitschy decor that features blazing colors, taxidermied animal heads, and clowns galore. It’s awesome. Even the food menu holds true to the theme, with six kinds of corn dogs available to soak up all that booze. You’ve never been to a bar quite like this one.

Where to Drink: Linda's Tavern

There is only one thing you need to know about this grunge-driven neighborhood favorite: It is the last place Kurt Cobain was ever seen alive. You should go.

Where to Drink: Havana Social Club

One of the best parts about drinking is that it can often lead to dancing, which is why this beautiful Cuban-themed venue is a must if you’re looking to lose it to some quality bangers. Tuesdays is their Real Love ‘90s party, which is exactly as fun as it sounds, and ladies get in for free until 11pm. But the real showstopper is their Wednesday night party, with DJs Stasia Mehschel of THEESatisfaction and KEXP’s Larry Mizell Jr. curating a mix of dancehall, reggae, house, and hip-hop.

Where to Shop: Fremont Vintage Mall

The neighborhood of Fremont is the center of Seattle’s vintage universe, so it only stands to reason that this subterranean mecca to all things thrifty exists here. A collection of vendors selling clothes, furniture, jewelry, records, art, and much more. Then, once you’re done here (in a minimum of two hours), head across the street to their sister store Atlas for more of that good good.

Where to Shop: Rare Medium

Thanks to our smartphones, we’re used to having our pictures as soon as we take them. But this Capitol Hill gem specializes in a different kind of instant photography. Selling all kinds of restored Polaroid cameras, Rare Medium is an ode to a simpler time, when we valued taking a photo, waiting for it to develop, and actually holding it in our hands. Owner Cory Verellen definitely has a passion for Polaroid, and his nostalgia-filled store is stacked with all sorts of refurbished models, giving it the feel of a museum. They’ll also customize your camera through laser etching, a process they’ve done for Jack White, Pearl Jam, and The Lumineers.

Where to Shop: Pretty Parlor

What kind of place is Pretty Parlor? It’s the kind of place that, until last year, had a beloved shop cat named Vincent that everyone who visited this charming boutique knew and loved (sadly, Vincent passed away). Owner Anna Banana (yes, that’s her actual name) once described her store’s aesthetic as “Audrey Hepburn meets Judy Jetson,” which is pretty spot-on (Hepburn’s image even adorns the walls). Banana has stocked her shop with vintage clothes that span the entirety of the 20th century, and also includes some new items from local designers. They've recently expanded to include a bridal boutique and men's section, dubbed Man Land.