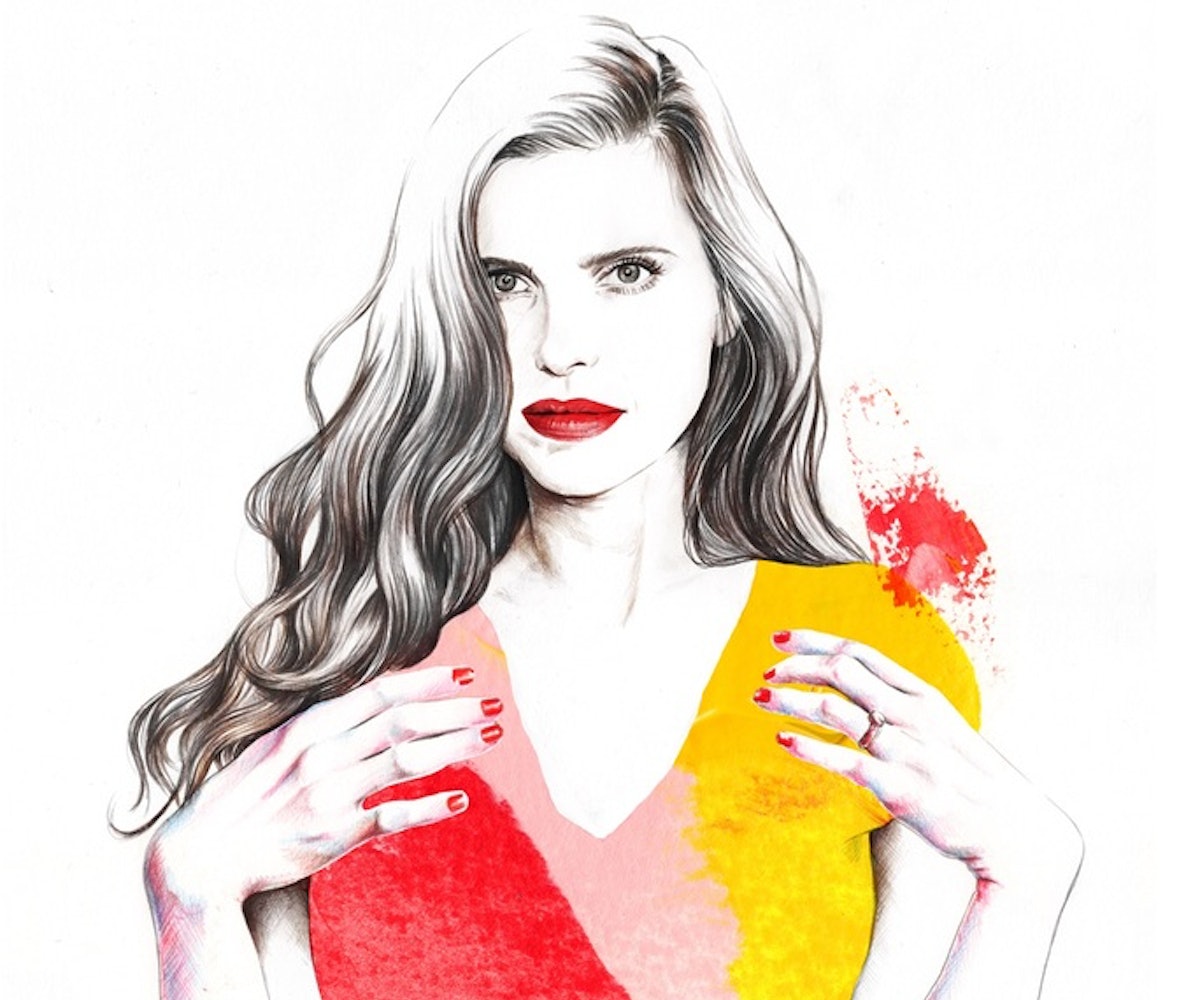 Lake Bell is on a hot streak. In June, the writer, director, and actress gave birth to her second child, and this month, another labor of love, I Do...Until I Don’t, hits theaters. Bell, who’s been married to tattoo artist Scott Campbell for four years, has clearly spent a lot of time deconstructing the meaning behind that particular vow, and with the follow-up to In a World..., her 2013 directorial debut, she’s crafted her own personal treatise on monogamy and fidelity. In it, she plays Alice, a tender but shy woman who’s become disillusioned with her marriage to Noah (Ed Helms). That relationship is one of several that Bell uses to figure out the ins and outs of I dos and I don’ts. Here, she shares with us what she’s learned.

Does having a second child at all resemble the act of making and writing and directing a second movie?

A thousand percent. I think of In a World… as my first-born child, and then I had Nova, my daughter. Then I made I Do...Until I Don’t, which is my third-born child. Then I had my son, who is my fourth. So I have four children, basically.

It seems, at least with children, the more you have the more enjoyable the experience becomes.

I can see how that would be, because eventually you give in to the chaos. When you have children and when you are cohabiting with someone, that’s an all-encompassing thing that changes. That’s a lifestyle choice. People who are perpetually single don’t have the endurance or the capacity to allow themselves to evolve.

It’s not. I have some family members who have chosen to be single and they evolve in different ways. If you choose to be in a relationship then you can’t get away with your bullshit. I think if you get married later in life, as a more mature person who has gone through dating and gotten it all out of your system, then you’re actually just a wiser being and you understand what you like and don’t like. You have a better chance of making it to the finish line with another person. That evolution is not about staying the same and just pushing things out of the way if they don’t make sense to you. Evolving is seeing things down the road and figuring out a way to continue down that path.

You just made the case for marriage and monogamy.

Yeah, I know, because I was on the other side of it where I was like, “This is some bullshit. I don’t think anyone should get married. Nobody’s making a good case for it.” And then I realized upon meeting my husband that when you meet someone you’re going to be scared, but you want to be scared with someone, and you’re old enough to make a wise decision about who is going to be your teammate through all the fucking mud and shit that life can dish out to you. Evolution, at the end of the day, is our privilege as humans. Otherwise we’re monkeys.

Was this film easier or harder to make than In a World…?

They were both hard in different ways. The second one was particularly challenging because I was a mom. So I had that in the back of my head, but also I wrote something that was a lot more complicated in terms of having several main characters. I wanted something that would challenge me. Also, the character that I play in the movie is very low status, and as a director you have to be very high status in order to manage and run the machine that is a set and have command. On camera I was very meek, and then off camera I had to shake it off and keep the ship running efficiently.

In the film you’re exploring the possibility of a polyamorous relationship. Do you think that works?

I think that for some people and certain temperaments that makes a lot of sense, but people have to be super honest with themselves. I have no judgment for people who have open relationships. It’s one of those things where it’s like, if that suits you and doesn’t provide conflict in your life and your heart and your body and soul, so be it. There are people in my family who partake in that, and I always have a lot of questions because it doesn’t suit my temperament, but it’s just a rare breed of people who can feel totally comfortable with that.

Your parents remarried. How did you think about the idea of marriage after that?

I was really cynical about it. I just felt it was archaic. I think we live too long. I think a lot in our society and in what we’re exposed to as we walk down the street, as we drive to work, all these things—social media and advertising, movies, everything—make it really hard to just be committed to one person. Even our parents have been victims of this massively distracting society. Now it’s even worse, right? It seems so bizarre that anyone would just commit to one person for life. Like, what the fuck, you know? But I will say this: I do think marriage is absolutely nuts for anyone under 30. It’s just not appropriate. Like, it should be illegal.