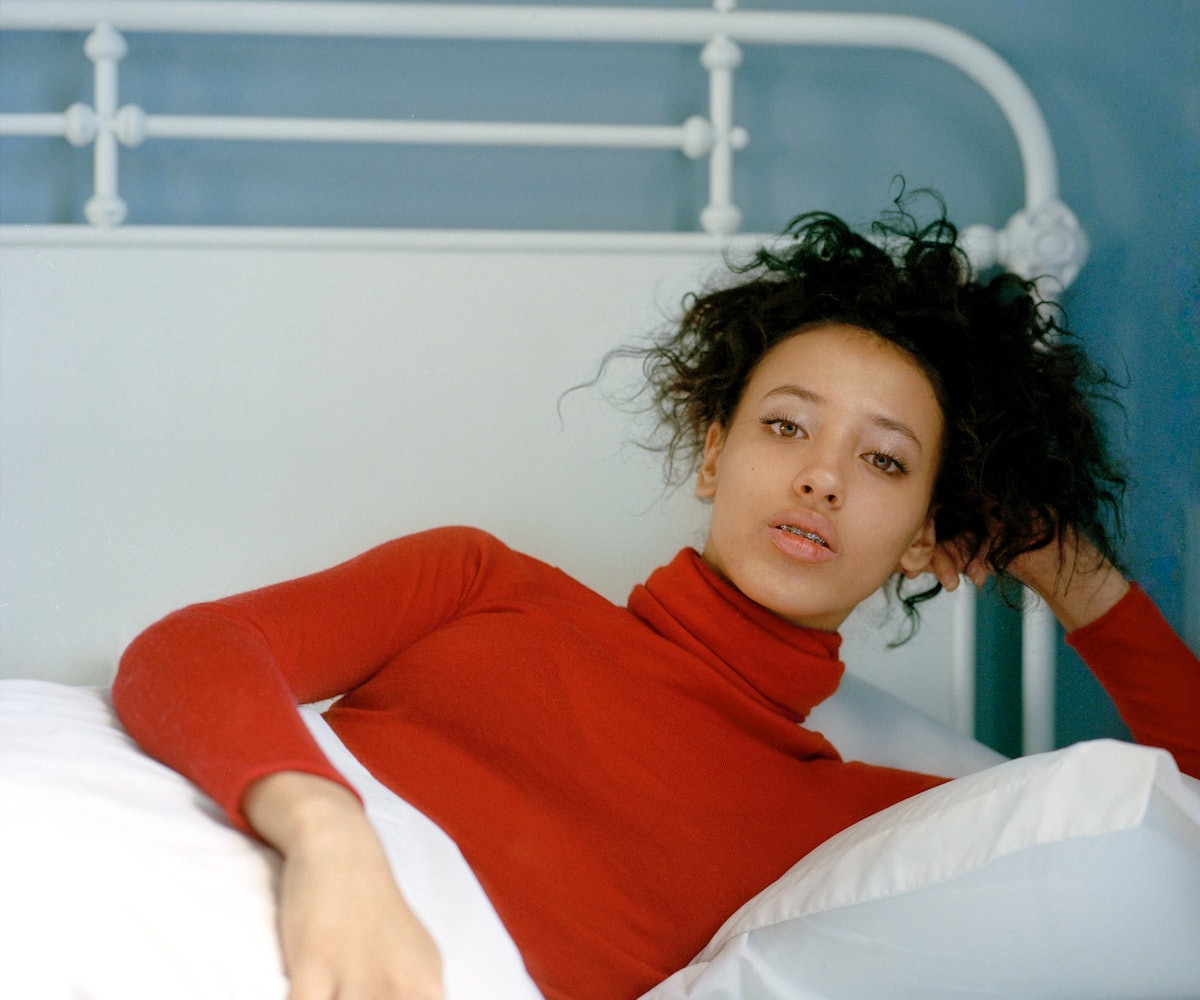 A proper English accent and a salty, don’t-give-a-shit manner of speech might seem like Sahara Lin’s most incongruous traits. However, the 19-year-old Chinese/Welsh/Dominican/Puerto Rican model who was raised in Wales and Brooklyn is the product of many seemingly disparate ideas and influences that manifest themselves in an overall lifestyle defined by fearless opposition—beginning with her signature braces.

“When I was 16, I didn’t want to get braces because I loved my fucked-up teeth,” Lin says, sitting in the third-floor Williamsburg walk-up where she has just wrapped her NYLON photo shoot. “But then when I got them I was like, ‘Fuck, I love my braces.’ It was only once I got my braces that I felt confident in myself, which is strange because it’s not supposed to happen that way. Suddenly, the braces were like a cool accessory—they look like grills!”

Dental hardware that most teenagers rue as the bane of their existence has become, on Lin, a fashion statement. And it’s this kind of latent quirkiness that makes her so eminently likable. The model is soft-spoken but bold—a rare mix of rough-around-the-edges attitude and sweetness—with a multiethnic beauty that has landed her modeling gigs with everyone from Calvin Klein to Kenzo (and a deal from Elite Model Management NYC). “Whenever they put me in a dress I feel strong as fuck,” she says of her approach to her work. “I don’t try to look dainty—I try to look tough. When I put on a dress I feel like I could fight someone in it.”

Lin’s perspective on her own style is similarly idiosyncratic: “I buy all my clothes at thrift stores, and I don’t really post my outfits on Instagram at all, either, so when I show up to shoots people seem surprised. They’re like, ‘I love your outfit, where did you get it?’ and I’m like, ‘A person died in these clothes—and it was two dollars!’”

Lin proceeds to show off her pair of wide-legged snakeskin trousers, a furry zebra-print half-zip, and a bright yellow crop top from a pile of what looks like old-school J.Lo velour that is gathered up on the floor. “I always get 99-cent-store jewelry, too,” she adds, holding up a fringed rhinestone choker with hearts at the end of each string. On a nearby table, her purse has been dumped to display diamond-tipped fake nails from the dollar store, ’90s butterfly clips, and a tiny plastic baby whose position amid the accessories makes it unclear whether or not it is part of an outfit.

Lin, a self-professed tomboy, also “doesn’t really like the internet.” Unlike most models, she doesn’t have Twitter, recently deleted her Snapchat, and only rarely posts on Instagram as @palefoxsahara—but that hasn’t stopped her from quickly accruing an enviable online following. Everyone has a friend that’s too cool for Facebook, and Sahara Lin is that person.

“I was always the kid in the corner just drawing with my hood up,” she reflects. “When friends in high school ostracized me, I sat at the table with the so-called ‘nerds’ and that’s where I had the best conversations, because they weren’t so involved in the internet and all this other bullshit.”

Lin’s mother, multimedia artist Choichun Leung, influenced both her sense of self and her tendency to follow her impulses—even dabbling in other forms of expression. “When I draw, I’m trying to get out an emotion, but if I can’t get it right, I’ll change it up—I’ll do sculpture, or I’ll make a beat instead,” Lin explains. The benefits of switching it up are true in modeling, too. “When they put me in outfits, it’s like I’m playing a character or a different version of myself—I get to try out different personalities,” she says. “Sometimes I’ll put on something unexpected like a suit and be like, ‘Shit, this looks good.’ So modeling has definitely made me more comfortable with me.”

Accordingly, when Lin brings up the fact that some internet trolls have said that her career will tank once she gets her braces off, she seems unperturbed, shrugging her shoulders with the same breezy confidence with which she mentioned being flown to Morocco for a photo shoot. “When I was younger, I couldn’t really find myself, but now I am so totally fine with who I am,” she says. “I’m going to do this shit because I want to do it—and that’s all there is to it.”