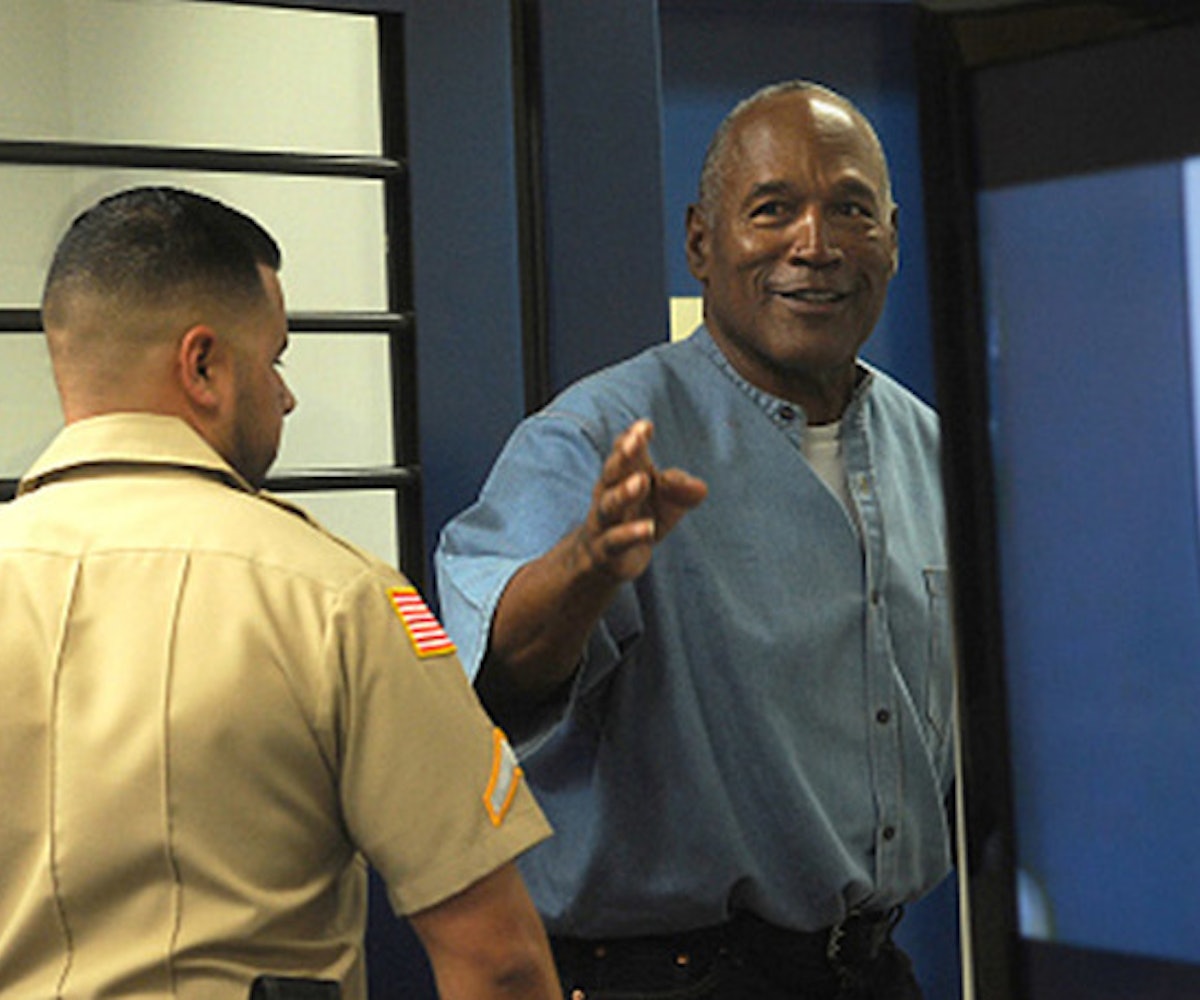 O.J. Simpson was released from prison Sunday morning after spending nine years behind bars for kidnapping and armed robbery, which he committed in Las Vegas in 2007. These seem like pretty heinous crimes to walk free after, especially considering he was on trial for, and most likely committed, a double homicide in 1994. And yet, Simpson was granted parole in July 2017 for his disciplinary-free record while in prison.

A spokeswoman for the Nevada Department of Corrections, Brooke Keast, told CNN that Simpson was picked up by an unidentified friend shortly after he was released around midnight. “I told him, ‘don’t ‘come back,’ and he responded, ‘I don’t intend to,’” she said. “He was upbeat, personable, and seemed happy to get on with his life.”

She explained that they didn't release him during the day in order to avoid excessive media coverage. “Our biggest concern was our safety and the public’s safety and not wanting anybody, paparazzi, to follow him,” she said. “He left through a big blue door through the front gatehouse and exited quietly. He looked down because he didn’t want to be photographed.”

Simpson, who is now 70, has been taking anti-violence classes while in jail. The former NFL star will remain on parole until Sept. 29, 2022, and will have to adhere to conditions laid out by the Nevada parole board. He's banned from consuming alcohol in large quantities or spending time with criminals and ex-convicts.

It's difficult for a lot of people to accept that Simpson is now a free man, but it's hardest on the relatives of Nicole Brown Simpson and Ron Goldman, Simpson's ex-wife and friend who he was on trial for killing 20 years ago. While he was acquitted of the murders in 1995, he was later found liable for their wrongful deaths in a 1997 civil suit.

"While we respect the Nevada Parole Board's decision to release Simpson, it’s still difficult for us knowing he will be a free man again," Goldman's sister, Kim, previously told People. “We will continue pursuing the now $60 million judgment awarded to our family after the jury found that Simpson willfully and wrongfully caused the deaths of Ron and Nicole, as well as remain dedicated in our commitment to domestic violence awareness, victim advocacy and judicial reform."