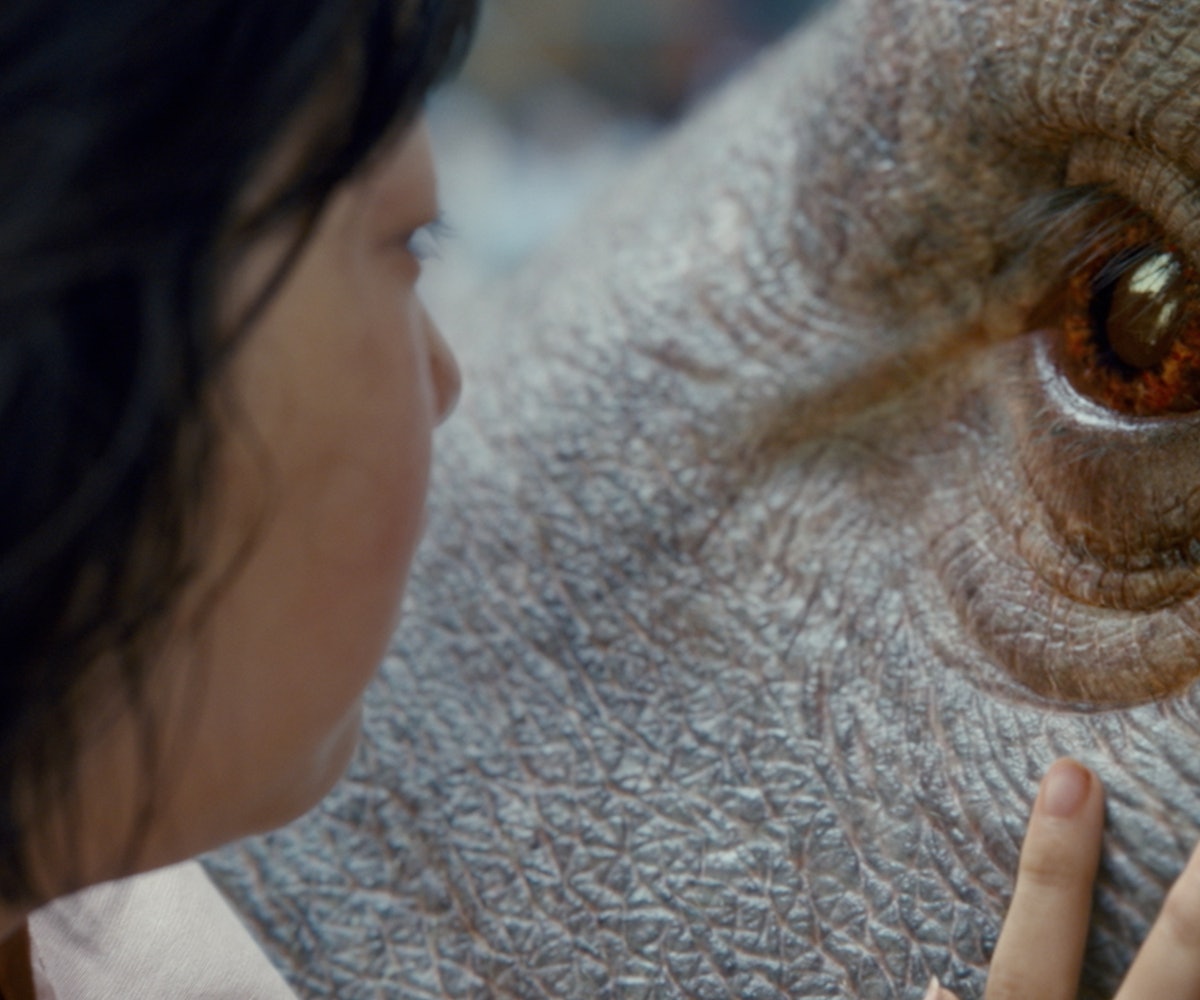 Okja is a strange creature. Not just the defiant, oversized pig that gives the movie its title, but the movie itself. On the surface, Okja has all the hallmarks of big-budget studio filmmaking: International locations—from Seoul to New York—a starry cast that includes the likes of Tilda Swinton and Jake Gyllenhaal, and a state-of-the-art, computer-generated character at its center so realistic that it must have cost millions of dollars to bring to life. And indeed, Okja’s budget hovers around the $65 million dollar mark, not exactly on the same level of Hollywood’s most expensive blockbusters, but a much higher price tag than most original stories of its ilk could ever raise. That’s because Okja, the latest fantasy from visionary South Korean director Bong Joon Ho, was funded entirely by Netflix, meaning that when it premieres this Friday, you’ll be able to watch it from the comfort of your own phone (or in a select few movie theaters, if that’s even a thing people still do).

Okja represents the ultimate paradox of the streaming revolution being spearheaded by Netflix. Because of the company’s business model, the stakes for a project’s success or failure become a lot lower than they would be for a traditional studio. Since Netflix doesn’t charge customers on a project-by-project basis, it doesn’t really matter how many people see Okja. Netflix makes money off monthly subscriptions, with prestige projects like Okja functioning as the bait. That means that Netflix can throw money at auteurs like Bong and just let them do their thing. If Okja turns out to be wonderful (it is), then that’s fantastic. If not, then chances are people will watch it anyway. So while studios often micromanage their big-budget films in the hopes that they appeal to enough people willing to go to a movie theater and pay for a ticket—a tactic that often backfires—Netflix is allowing creators like Bong to just go off and make what they want to make.

For Joon Ho, that meant making a poignant and thrilling adventure movie that has the outer shell of a Hollywood blockbuster but the DNA of a wild international production that a traditional studio wouldn’t dream of releasing. Like his last movie, 2014’s dystopian action thriller Snowpiercer, Okja exists at an intersection between a recognizable Hollywood product and something far more eccentric. That tone is established right off the bat, with the appearance of Swinton as Lucy Mirando, the cartoon-villain head of the Mirando Corporation. In the movie’s dizzying opening sequence, she is giving a speech to investors and the media about the company mission to sustainably raise “super pigs,” hippo-like animals that will solve a growing food crisis with their delicious and, supposedly, GMO-free meat. As a publicity stunt meant to mask the dark truth of these pigs’ fate, Mirando has selected 10 farmers from around the world to raise their own animals, with the kooky TV zoologist Dr. Johnny (Jake Gyllenhaal) assigned to judge the winning pig 10 years later. That pig will be whisked to New York City where it will receive a hero’s welcome at a parade. Then, it’s off to the slaughterhouse. Right from the get-go, Swinton’s deliriously madcap performance—simultaneously unhinged and tightly controlled—signals that Okja is a movie that’s willing play with expectations. Gyllenhaal’s performance, manic and often terrifying, sometimes feels like it belongs on a show on Adult Swim.

Fast-forward to the idyllic hills of South Korea, and suddenly Okja shifts from deranged corporate satire to a kid's movie. It’s there that we meet Mija, the 13-year-old girl who, along with her farmer uncle, has been raising one of those pigs since its birth. In one of the movie’s most magical sequences, Bong establishes the deep friendship between Mija and Okja by taking us through their daily routine, like Okja belly flopping into a pond and shooting out fish for Mija to collect, or her taking naps on her friend’s enormous belly. That existence is disrupted when Dr. Johnny visits the farm and crowns Okja the winner of the contest, dooming the pig to an uncertain future in America. But Mija, fiercely brought to life by South Korean newcomer Ahn Seo-hyun, won’t have it, and the rest of the movie sees her do whatever it takes to make sure Okja stays home with her. Soon, Mija is allying herself with the Animal Liberation Front, a group of hard-core activists that includes Paul Dano and Lily Collins. During a harrowing rescue sequence that includes a supremely well-done car chase, Okja transforms into breathtaking action spectacle, with Bong invigorating fresh bravado into something we’ve seen in movies one too many times. We won’t spoil the rest of the movie, but while Okja does feel like an E.T.-esque fantasy adventure about the friendship between a girl and her super pig, it does not shy away from imagery that will horrify.

In agreeing to make Okja for Netflix, Bong had to accept that most audiences would be watching his grand accomplishment on screens no bigger than a microwave. Sure, many homes have entertainment systems intended to maximize the viewing experience, but you’d be surprised to find how many people watch entire movies on their phones. Earlier this month, Collins told us that Bong was unfazed by this. She said the director told her that he knew that “if it would look amazing on the big screen, it would look even more amazing on a small screen.” It’s unclear what he meant by this statement, and there are many people—especially his fellow filmmakers—who would disagree. But Okja is far more than visual spectacle. It has a message it wants to spread, about the unstoppable march of capitalism, about animal rights, about the limits of activism, and about the unbreakable bonds of friendship. And sharing that message with the world seems far more vital than the size of the screen on which it is received.