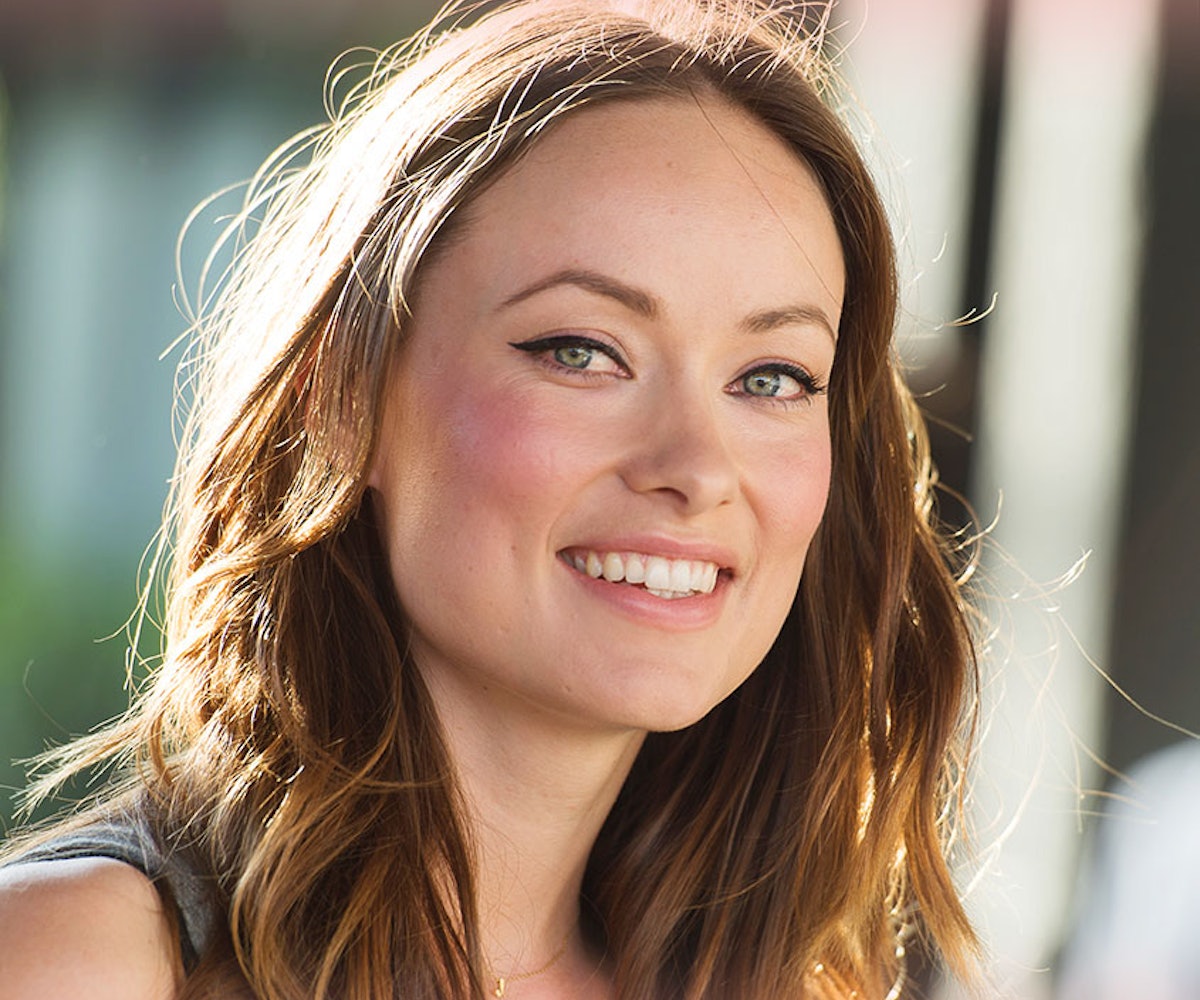 Since arriving on the scene with that black bob in TRON, Olivia Wilde has shown breadth by slamming back beers in Drinking Buddies and breaking our hearts in Her. With Meadowland, her latest, Wilde works as both producer and actor, delivering her most vulnerable performance yet. And while the film may be the directorial debut for Reed Morano, her experience is well marked with past credits including director of photography for indie successes The Skeleton Twins and Kill Your Darlings. At Tribeca Film Festival this past Friday Meadowland premiered to a packed house, which is only appropriate considering its truly stellar cast. We’re talking Luke Wilson, Elizabeth Moss, Juno Temple, Scott Mescudi and John Leguizamo. As if Wilde wasn’t enough already.

Wilde plays Sarah, a woman whose young son has been missing for over a year. Sarah and her husband Phil (Wilson) have been trying to piece together a life that resembles some sort of normalcy. She juggles her job as a public school teacher while Phil continues his work as a cop, but the couple goes about grieving in vastly different ways. The deeper Sarah falls into her pain, the more she loses hope for any way out. Watching Wilde unravel on screen is unlike anything audiences have experienced from her yet. She loses the makeup and the sanity. Nylon got to sit down with Wilde at the Smyth Hotel the morning after the Meadowland premiere. Open and passionate, Wilde described her motivations for doing such a brave film, her “ride-or-die” relationship with Reed Morano, and why this movie means so much to her.

You look so put together and especially the day after your premiere.

With any film festival, this is the case.

It wouldn’t be a festival if we weren’t dying!

I know. Congrats on the film. I really applaud you from the business side of things, producing this, but also it’s the most vulnerable performance I’ve seen from you. Was that what drew you to the project?

Yeah. It was such an unusual perspective on how a woman would grieve and how a mother would grieve. We’ve seen stories about parents losing their children, but I’ve never seen a story about a woman slowly cracking and losing her mind and attempting to kidnap another child and really taking on the more masculine side of the relationship in terms of grieving. Her husband, as so beautifully portrayed by Luke, is trying a more traditional route. He’s grieving with others. He’s reaching out, asking for advice. He wants closure, trying to maintain a connection to his partner and also investigating what happened to his son…or at least attempting to. And he’s a cop, the ultimate powerless position for someone who’s in a profession trying to help others. I just think he’s so brilliant.

The scene when he’s in the [support] group of people telling his story….

I was sobbing. In the editing room we were such a mess. It was always just so exciting that Luke was doing such great work, and it’s so painful to watch.

So before the film was cast, you see that there’s this script you’re really going to have to fight for, but your agent is like, “Don’t even try.”

Then you go and meet with Reed at the Bowery for two hours. What was your goal with that?

I knew in my bones that I was supposed to play this character, probably more than ever. I just sat down to tell her what my version of the character was. If she didn’t see it the same way then it was just not meant to be. She was going to make something different. So it was probably my confidence that had an effect on her. I sat down and said, “Listen, I know everybody else is hitting you up. Probably some actresses who have a reputation for appearing in these films much more than I do are hitting you up. And that’s probably feeling really good, and I congratulate you on that because I think you’re a badass. But let me tell you the way I see it…” We really connected on it not being purely sad, and that, I think, was our breakthrough. She said, “Yeah, I don’t see it that way either. Are we fucked up that we see light in this story?” I really thought Sarah was a badass character and really dynamic.

She’s funny in a way.

She’s funny. Reed and I made a decision in pre-production that she would be a really terrible teacher. It’s not Half Nelson or Dangerous Minds, where she’s a great public school teacher who’s going through her own troubles. She’s the worst. She makes them read poetry that’s way over their heads. It’s so depressing. She doesn’t really do much to motivate them and takes little interest in their lives. When Sarah has a student that’s clearly self-destructive, she doesn’t do much. She’s more envious of her than concerned.

She kind of feels selfish throughout the film but at the same time, is she selfish or is she becoming a child? Was that a conscious decision you all made?

We thought what are the things you wouldn’t bother caring about anymore? That’s why the character is attracted to the Burzum music. This is music that’s purely aggressive. She would love to just be able to live in that aggressive state, but no, when you’re a person in this world who’s gone through loss, you have to fucking get up, brush your teeth, and go to work. That’s just so maddening no one should have to do that. You should be able to go and scream in the middle of the road. Sarah’s attracted to the idea of not having to live up to any sort of social expectations. She’s unstable and she’s dangerous. That’s something Reed and I connected on.

At the same time that you are playing a character that is thirsty for  irresponsibility, you’re also producing this movie. Were you really walking that tightrope?

The producing role helped balance out what I was going through in the character. It would have been potentially harmful to exist solely within Sarah’s headspace. I think it helped keep me balanced that I had to snap out of it to have a production meeting at lunch.

That’s so hard, though.

Yeah, I would show up with like bloody scars on my arms and in this dirty yellow sweatshirt with just a red puffy face and be like, “OK, what’s the problem? Oh, catering can’t meet us at this location so we need to change this and call the teamsters and do this and do that…”

That’s so interesting. Some actors would say, “No, I need to purely be in this space.”

I think it’s to Reed’s credit that I was able to do it. I think I would have had to stay purely in that space if I didn’t have a partner who was so completely in it with me. I knew she would keep me on track. It really all depended on Reed. And she felt it all depended on me. We were so co-dependent.

I went to your Q&A at the Apple store this week and you talked about being ride-or-die partners.

It’s minutes before we get that tattooed, by the way! So ready.

I love that. Actually, I know a production company in L.A. that did that. Like 10 guys have “Coatwolf” tattooed on them.

I believe it [Laughing]. I would have an elephant tattooed on me if it wasn’t the symbol of the Republican Party.

So you signed on to do the script and then you got pregnant! You and Reed are both mothers. I have to think that was a big part of the communication and trust.

Big part. There were things that we would acknowledge were really, really painful that maybe other people on the set didn’t quite get. When you’re a mom you spend a lot of time folding little shirts; things like that. We would look at each other and just shake our head like, 'dude.' Some things that other people thought were completely insane we said, ‘Oh no, that’s what I would do.’ Like, sit in the room at his desk and read his stuff, smooth out the covers on his bed. Both of us being mothers really helped fight for possibly the more antagonistic parts of Sarah. Every day, Reed and I agreed we’d probably just kill ourselves if this were our life! Everyday, it was like, 'why is Sarah choosing to live this day'? That was an interesting way to approach a character because usually you approach a character thinking why is she making a choice to do whatever she’s doing in this role? I’ve never had to make the choice of why am I alive? That was something that was so dark that only Reed and I were really able to have that conversation because we thought we understood what that kind of loss would do to you.

So why is this film important to you?

I think it’s an acknowledgement of the people who have chosen to keep living. We see it everyday. There are too many great examples of this. I feel like, for me, the reason this film is for men, women, mothers and non-mothers is because it’s an acknowledgement of the pain people are living with. You’re not alone and you don’t have to pretend you’re not in pain. You should be acknowledged for your strength rather than be expected to hide your pain.

You should see Sufjan Stevens.

I saw him recently and that’s exactly what I thought in the middle of the concert. His album is about his mom passing away. But I thought it’s okay to acknowledge that. I think films and music have to go to that place.

People do! But if actors learned from singers it would be an interesting way to train.

You should produce a film and play a singer.

I’ll have to play Tom Waits or Bob Dylan.

You have to play Tom Waits. Cate Blanchett played Bob Dylan so you know it could happen…