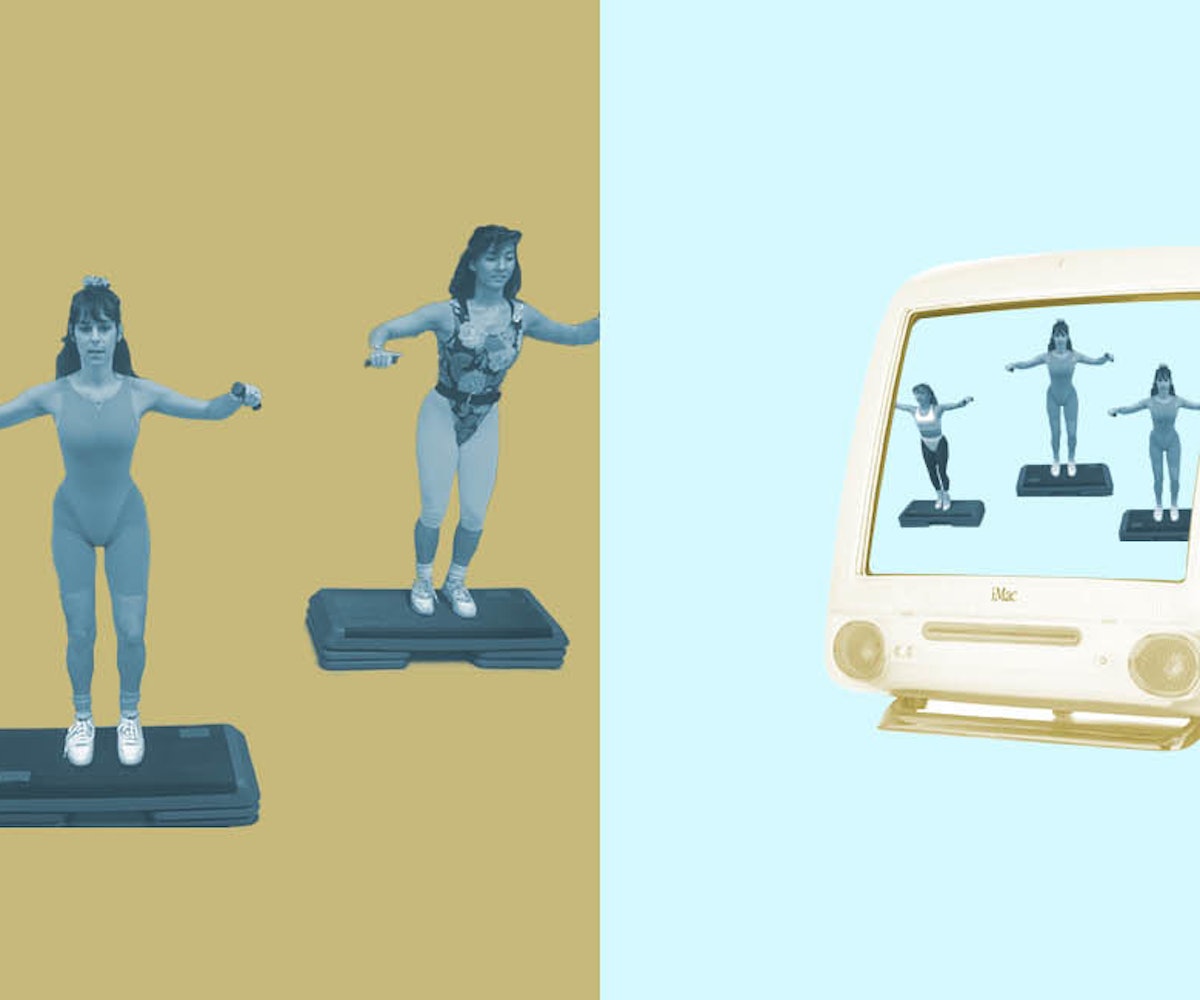 Tl;dr: I vowed to work out more this year.

And this was different than my usual vow, which is to promise I will go to the gym at least three times a week. This was a vow to commit to doing some form of exercise once a day, be it five minutes of ab work, a 30-minute walk home from work, or a 60-minute barre class. After several years of abandoning my fitness resolve by mid-January, I've realized that lack of time is to blame. I thought about this as I scrolled through Instagram—which is just what I do when I ponder all important life dilemmas—I came upon a friend's account featuring photo after photo of her post-workout selfies, as well as fragments of fitness videos all hashtagged with #tiuteam and #tiecheckin. A devout follower of the Tone It Up program since 2014, her dedication and consistency to working out practically daily—despite having one of the busiest work schedules I know!—was inspiring.

As someone who previously associated online workouts with Jane Fonda in a Spandex bodysuit and has always worked out better in a competitive group setting, I was skeptical. And yet, I had to admit, here was proof that it worked. I was left wondering, Could online workouts be the solution to my time restraints?

I wasn't alone in contemplating this. The end of last year saw a boom in online workouts and virtual trainers, and this rise is only expected to continue, most experts agree. It's not that surprising—with just about everybody I know in New York City being too busy to hit the gym regularly, it makes perfect sense that people are attracted to flexible workouts that can be streamed anywhere, anytime. And beloved physical studios are now beginning to catch on, too, supplementing their in-studio classes with virtual ones.

If it were up to me (and not my wallet/common sense), my entire workout routine would be made up of regular barre and low-impact sculpting and strength-building classes at boutique fitness studios, because those are the classes I actually don't mind frequenting. With that in mind, I decided to test modelFIT's and The Bar Method's online workouts. While I've taken Bar Method in-person classes before many times, I've only heard about the cult-levels of fandom that modelFit induces amongst NYC and L.A. residents.

After mentally preparing for all the equipment I would need to get, based on what I've done in the past, I was pleasantly surprised that for Bar Method all you really need is a mat and a chair. Sure, dumbells are a nice addition, but if you don't happen to have any laying around—because, I don't know, you got rid of them during your last apartment move when you couldn't even remember why you bought them in the first—just like in class, your own body's weight is enough. With 70-plus (yeah!) videos, Bar Method offers everything from full-body barre classes (equivalent to those you would take in a studio), to specialized 20-minute segments focusing on specific parts of the body. While my main concern with doing online barre was that the videos would not be able to maintain my focus for the entirety of the 45-to-60-minute session—especially during the grueling thigh portion that I struggle with even when surround by a dozen inspiringly fit women—the instructors leading the videos are just as high-energy and motivational as any of the ones I've had in-studio, a fact I confirmed when I took a class a few weeks into doing barre virtually. Also, with people participating in the videos, there is a sense that you're still competing against someone, even if you find yourself at home. Meaning, by the end of the session, you find yourself wiped out.

The routines are very similar to what you would do in a BM class. But, in addition to having the option of doing barre anytime, there's also the upside of being able to commit to short sessions focusing on things like abs, outer glutes, or obliques should you find yourself pressed for time, which is what I sometimes found myself doing at 10pm after a long day while maybe-maybe-not catching up on my television series. Beginners, take note: If barre is something you're looking to get into, go to a few physical classes first, just so you can note the adjustments that your instructor will encourage you to make. Even after years of taking barre and with the helpful tips the instructors make virtually, it didn't beat having a real-life hand slightly adjust my feet or back, if only to make me more comfortable.

Having never done modelFit, the low-intensity sculpting classes that employ isometric movements and bursts of cardio, in person, I didn't know what to expect. What I did know was that on the first day I resolved to do my first online class, I was feeling tired after come home late following a trek through a snowstorm. Having told myself that all I had to do was one of the shorter videos, of which there are several (there's even a specific section for when you have only 10 minutes), I put on the "Plank Series," a five-minute tutorial focused entirely on planking—which, spoiler alert, is the best video ever and now my go-to before any workout for my abdominals. Having completed it, I suddenly felt good about myself and powered through the entire beginner series, which included an arms, legs, and abs portion. What's more, I enjoyed it and didn't realize when it was 45 minutes later. The next day, I was looking forward to coming home and trying the other sequences.

When I finished all the routines that didn't require equipment a week later, I decided to take my smartphone and Bluetooth headphones to the gym and do the exercises there. That's when the most surprising thing happened: I started to enjoy the gym. Typically a person who sticks to the treadmill, StairMaster, and ellipticals (and hates every minute of it!) and shies away from anything that requires DIYing a gym routine in fear of making myself look dumb, I found myself feeling more confident and less self-conscious while doing a standing full-body workout and lifting weights in front of the communal mirror.

Suddenly I found myself craving trips to the gy, so I could stream the videos featuring the ankle weights or Pilates ring that I don't have at home, or even just to do the planks on the extra-cushiony mats. And after doing the five-minute planks, I wanted to do the abs workout, that then turned into another abs workout, arms workout, and a three-mile run on the treadmill, prompting my boyfriend to text me during one of the sessions asking me if I was okay because I had been at the gym for two hours. And while there aren't that many videos in this series, there is enough variety to mix and match routines for a completely different and tailored program each time, which is another perk I grew to love. And with videos ranging from five to 30 minutes, I've found plenty that checked off my daily quota.

The second surprise came when I got around to taking an in-person class. Having done several weeks of modelFIT online, I expected the same level of attention as I've been granted by head trainer Javi Perez and founder Vanessa Packer virtually. First thing I noticed was how full the class was. Spoiled by the space both my living room and gym provided, I was overwhelmed by the people fighting for a spot, like it was the Hunger Games reboot audition (seriously, I got major side eye when I got too close to one person and was also talked to very firmly after I allegedly took someone else's spot), and relegated to the farthest end of the room with a limited view of the instructor. Having done a lot of the moves online, sure, I was able to keep up most of the time, but there were a few instances where I played the Telephone Game, hoping that my neighbor knew what she was doing or copying someone up front who did. And while I enjoyed the class, I realized that I would rather take the classes online where I have a front-row view of what's going on. It helps that the online workouts are $19.99 a month versus $34 a class pop, too.

After working out virtually all month, I can say that doing it long-term requires discipline; I sometimes had to beg myself to do just five minutes of something, anything. But, I know that doing these workouts is what allowed me to keep up with my resolution to do some form of activity every day and go to the gym more often than I have ever in my life. Which is great for my new abs which, biggest surprise of all, are more visible than ever before.

NEXT UP
Beauty
Meet Erika “Babygirl” De Leon, The B-Girl Who’s Empowering A New Generation of Female Breakers
Beauty
The Most Viral TikTok Beauty Products of 2022
Beauty
Tumblr’s Coquette Aesthetic Is Taking Over Beauty — How To Get The Look
Beauty
Kristen Stewart Brought Back Her ‘The Runaways’-Era Mullet