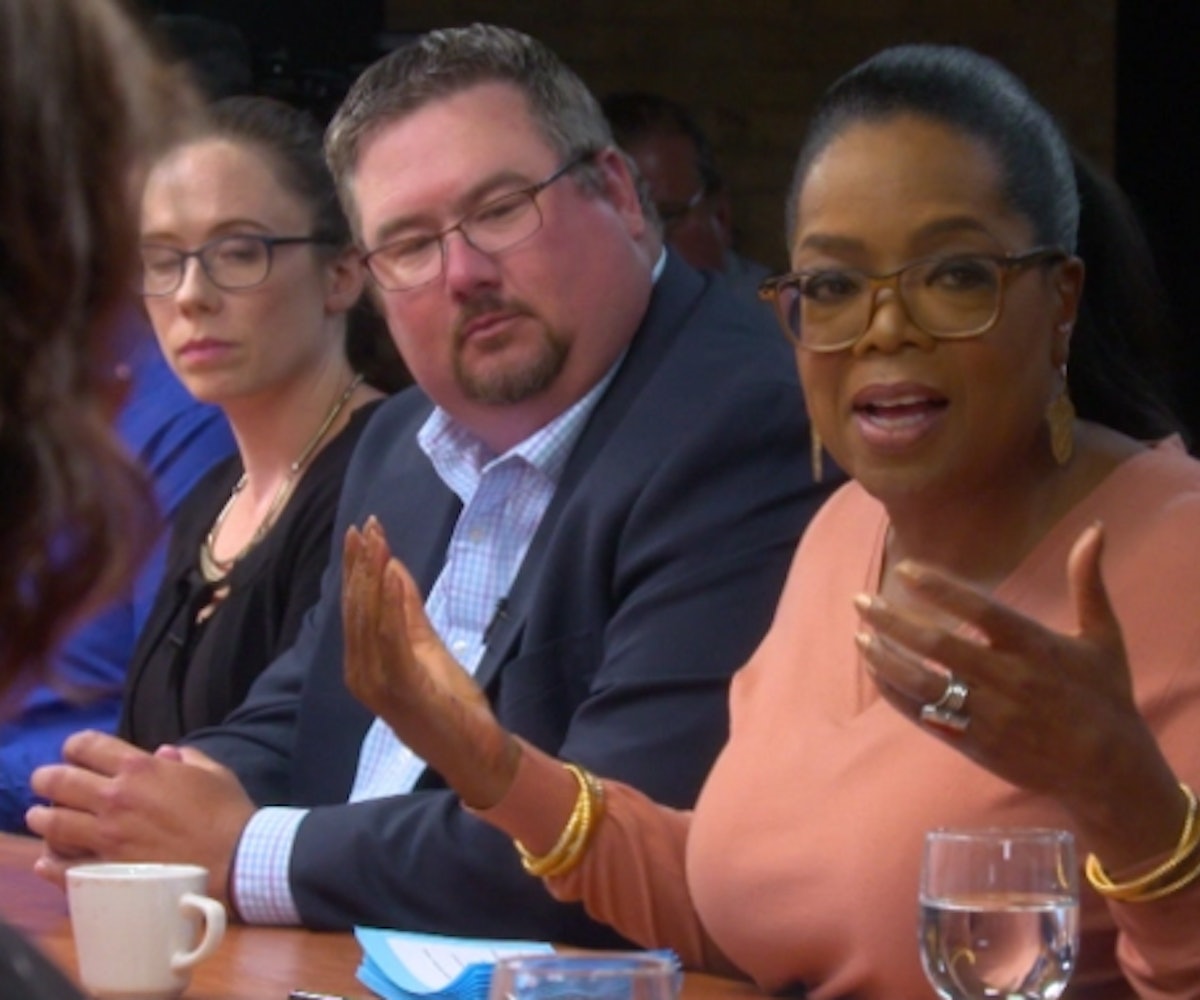 Last night, Oprah Winfrey made her debut as a correspondent on 60 Minutes and, to mark the occasion, moderated a discussion between those who voted for Donald Trump and those who did not. It was frustrating to watch, not simply because it felt like something we’ve all seen before, but also because of the conclusion it leads to: We’re totally fucked.

The segment, which arrived on a wave of hype, saw Winfrey travel to Michigan, one of the key states in the election, to sit down with seven Trump voters and their counterparts (Winfrey never discloses who each of those other people voted for). Essentially, Winfrey was attempting to actualize a common refrain we heard in the wake of the election—that the only way to unite the country was to listen to the other side and to try to understand where they were coming from. The hope is to find common ground, to come to the realization that, despite our political and ideological divides, we’re all the same. In that sense, Winfrey’s experiment failed.

She introduced the segment by explaining that “we wanted to know if the divide was as deep and bitter as before.” On the one hand, duh! But on the other, Winfrey recorded the segment before the entire NFL essentially stood up to (or knelt down to, rather) the Trump presidency in front of the whole country. However, the answer was a resounding yes before yesterday, and it’s definitely a yes after it.

Nevertheless, Winfrey began the discussion by asking its participants how they thought Trump was performing as president. One guy, Tom, was the first to answer. I’ll let you guess who he voted for. “Every day, I love him more and more,” Tom said. “Every single day. I still don't like his attacks, his Twitter attacks, if you will, on other politicians. I don't think that's appropriate. But, at the same time, his actions speak louder than words. And I love what he's doing to this country."

Another woman, Jennifer, said Trump is a “horrible” president. “He's divided our nation more than it has ever been,” she continued. “And then when he's on teleprompter, he's sane. I'm like, 'That's great. That's great. That's a good message.' But when he's off teleprompter, I feel uncomfortable. It makes me feel sick to my stomach. And I think that we look like we're a joke to other foreign leaders. It's an embarrassment." Jennifer is a Republican who did not support Trump and said that her stance caused major friction between her and the rest of her conservative family.

The conversation turned ugly when Winfrey brought up two of the more divisive hallmarks of the Trump presidency—the Russia probe, and his response to the violent protests in Charlottesville, Virginia. But again, we learned nothing new. Those who voted for Trump believe the Russia investigation is a witch hunt ("spare us the fake outrage," one Trump supporter yelled), and that Trump was right when he said there was “violence on many sides” in Charlottesville. “The KKK wasn't fighting with the KKK,” said Tom. “There were two groups."

If you follow certain people on Twitter, these are the arguments being fought every day between liberals, moderate Republicans, and Trump’s base. The segment’s most fascinating part came in the form of a woman who voted for George W. Bush twice, Barack Obama twice, and finally for Trump. “Part of the reason why is because I gave the Republican establishment a chance, I gave the Democratic establishment a chance,” she explained, echoing a common reason used by Trump voters. But then she said something many were saying immediately following the election, but not so much anymore. “And can we please come together and give the president a chance? Because in my opinion, we’re not. We already have preconceived ideas of what he’s like.” When Winfrey correctly pointed out that Trump shows us every day who he is through his actions and tweets, the woman simply nodded and said, “We need to give him a chance.”

The most poignant moment came toward the end, when one woman, a Democrat who suffers from migraines, worried aloud what would happen to her should the Republicans take away her health care. “If I wake up tomorrow without health care, my life is over,” she said through tears. “If you see somebody rolling around on a tile floor pulling their hair out, could you see that and take away my health care?”

“Why can’t we repair Obamacare?” one Trump supporter said. It was the only moment that felt like these people were living on the same planet. But the segment ended with a bleak premonition. “As wonderful as this has been,” one woman said, “I think we’re going to be just as divided, and I’m even fearing civil war.” A shocked Oprah looked around the room while everyone nodded their heads in agreement. “I agree,” another man said. “I don’t see a light at the end of the tunnel.”

In a brief epilogue, Winfrey tried to spin a positive light on the discussion, saying that some of the members of her panel have stayed in touch, and even visited a shooting range together to discuss the Second Amendment. But the overall message of the segment still hung over it like a dark cloud: If Oprah can't bring us together, then nobody can.

NEXT UP
Culture
The Cat Person Film Adaptation Heads To Sundance
Shopping
49 Cool Things Under $30 That You'll Get A Sh*t Ton Of Use Out Of
Life
NYLON Daily Newsletter: December 7, 2022
Fashion
Dickies & Gucci Vault Drop A Sparkling, Studded Holiday