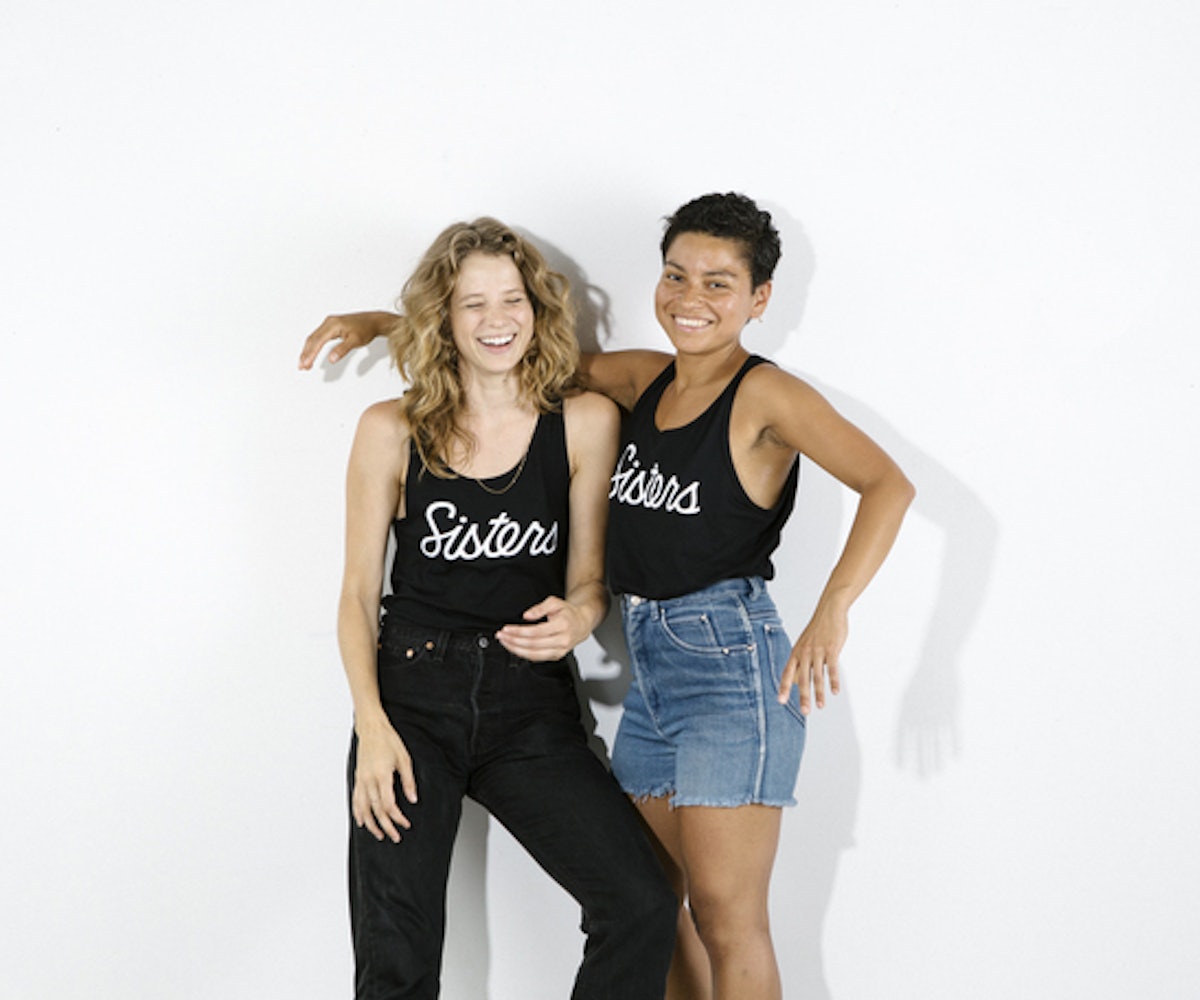 The bicoastal feminist-focused shop Otherwild is best known for its The Future is Female tees, sweatshirts, and tanks. Now queer fans thirsty for another way to wear their identity might find it available as part of the brand's continued collaboration with Herstory. Otherwild owner Rachel Berks and Kelly Rakowski, curator of the lesbian history-highlighting h_e_r_s_t_o_r_y Instagram account, have combined forces to launch their first summer-specific collection. Items include a “lesbian bathing suit” (a sports bra-and-bike shorts combo that reads “Lesbian Looks”) and a lavender-colored beach towel covered in slogans like “It’s in to be out” and “We’re more than just good friends.”

The new items (which also include a tank reading “Sisters” in cursive and a T-shirt emblazoned with the word “Dyke” in rainbow font) are just the latest in their successful line of gay- and queer-focused gear that is culled directly from LGBT history. Each wearable is inspired by a real photo, phrase, or item from the '70s, '80s, or '90s, as both Berks and Rakowski share an affinity for nostalgia and visibility. One item from their first collection, a sweatshirt reading “Lesbian Culture,” was taken directly from a photo of “graffiti on a rock in Central Park in the ‘70s.”

“It’s plucking these moments out of herstory, and figuring out how can we take this graphic that says ‘Gay Power’ on a balloon and translate that into something that we can wear in 2017,” Berks says. “That will both connect us to the past and give us a sense of visibility in the present. I think it’s the connection of those two things that feels the most exciting about the collaboration.”

“Dyke” has been especially contentious for lesbian and otherwise non-straight women, as it originated as an epithet hurled at gay women—especially those who appeared more masculine or visibly gay. While some of the older generation eschew the term, others see it as something to take as their own, to rightfully reappropriate into something powerful and self-professed. And as of late, the word “dyke” has even gotten Facebook users temporarily banned or blocked for their use of something the social media site sees as a slur.

“The consumers are connecting with those terms, so they’re excited to wear a shirt that says ‘Dyke,'” Berks says. “And interestingly enough, the 'Dyke' T-shirt we just made has been the most popular item in the collection and has been doing really, really well.”

Berks acknowledges that wearing a shirt or item that outs people is not for everyone, even if they claim the lesbian or dyke identity.

“Wearing these things on your chest can feel extremely vulnerable,” she says, “and so it’s not necessarily for everyone.” But for queer women who crave an opportunity to be seen and acknowledged, “the specificity is important.”

And yet, others will wear these items, too. For example, an unsuspecting character dons the “How Dare You Assume I’m Straight” tee from the collection on the upcoming season of Broad City. Like with her successful run of The Future is Female shirts—which, too, came straight out of lesbian herstory—Berks is ready for the onslaught of orders that inevitably comes with a public figure popularizing her work. (She says Gillian Anderson is responsible for one particular uptick in purchases.) With 25 percent of the proceeds from that tee benefitting Planned Parenthood, philanthropy is an intentional part of Otherwild’s want to provide the community with more than just clothing and housewares. Similarly, the Herstory collection benefits the Lesbian Herstory Archives, the nonprofit that is home to the largest collection of lesbian imagery and historical documents, photos, and other items in the world. It’s where Rakowski collects a lot of the images she uses for her Instagram account, and where she and Berks found inspiration for their collection.

“We owe such a debt to them for collecting and storing so many wonderful archives and ephemera,” Berks says, “and we’ve been there a bunch of times together just look for the next thing that catches our eye to work with.”

“When we start doing the work and gathering the inspiration, it turns into, ‘Oh my gosh, we have so much to work with here!’” Rakowski says. “So we are kind of overflowing a little. It just keeps going and evolving.”

Once summer’s over and it’s time to pack up the beachwear, Otherwild and Herstory will continue to offer more sweaters, T-shirts, buttons, sweatsuits, and other items to celebrate the collision of queer past and present. (Items from earlier parts of the collection are still available, too.)

“I think we’re gonna keep going because it just feels natural and organic,” Rakowski says. “As I research, it’s always in the back of [my] mind. So if we see something that’s interesting to us, we save it. It’s kind of a natural progression of finding things along the way… and when we’re ready to do the next collection, I’ve gathered a bunch of things we could possibly work with.”

“We find things from herstory, and then we try to take them somewhere deeper,” Berks says, “or take something from one thing, and make it into something else completely.”

At a time when feminism and queer identity is being co-opted by fast fashion, that kind of authenticity is strongly desired and supported, which is why they’ve enjoyed continued success and are running low on some of their earlier offerings, like their Sisters knit sweater. Soon, they'll become part of herstory themselves.

“We’ll be retiring them because we’ll keep going, and after a while, you just run out of room,” Berks says. “They’ll be collector’s items.”