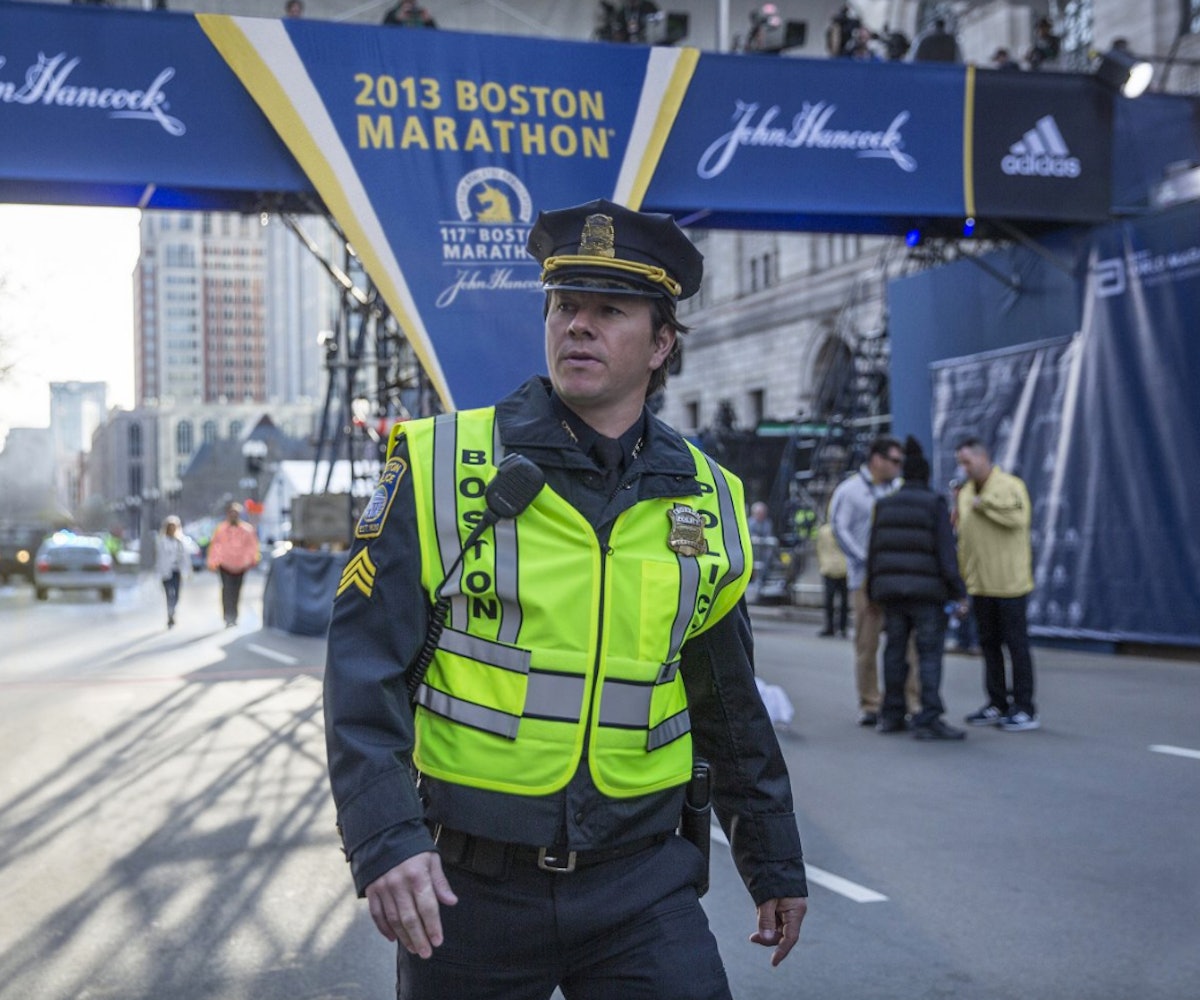 Next week, Patriots Day will be released in theaters nationwide, and as audiences across the country pay to relive the horror of the 2013 Boston Marathon bombing and the ensuing manhunt, they will also be told the story of the heroism and cooperation that emerged in its wake. And that’s what Lionsgate, the studio behind Patriots Day, wants you to focus on. Patriots Day is being marketed as a tribute to the scrappiness and resilience of Boston, and everyone involved is keenly aware that this movie arrives just three years after the attack that claimed the lives of three people and injured an estimated 264. The scars are still fresh, both literally and figuratively, and the last thing the filmmakers and the cast want is to be seen as cynically profiting off of someone else’s tragedy. But you don’t invest $45 million in a movie—Patriots Day’s reported budget—unless you’re looking to make bank.

The question of “Is it too soon?” has dogged Patriots Day since the project was first announced. It took just Hollywood five years to make a movie out of the rubble of September 11th, but Oliver Stone’s World Trade Center told the more obscure story of two police officers trapped underneath the wreckage of the Twin Towers for days. Patriots Day, however, is a faithful recreation of that horrendous day’s events—from the bombing to the Watertown shoot-out to the eventual capture of Dzhokhar Tsarnaev—events that are still very fresh in people’s minds, especially Bostonians. As Esquire’s Luke O’Neill points out, Patriots Day’s rigorous recreation of that day is also its downfall. “Watching the film I couldn't help but think it was actually too soon for a movie like this because we all still vividly remember every beat of the plot,” he writes. “There were no surprises in this film. I'm sure someone just hearing about the bombing for the first time will be fascinated. I don't know who else it was made for.” And while the movie does depict and honor many of that day’s heroes, it also, for the sake of turning it into a more traditional action movie, features a totally made-up character that looks and sounds exactly like Mark Wahlberg.

Patriots Day marks the third time Wahlberg has teamed up with director Peter Berg for a flag-waving, ripped-from-the-headlines thriller that mines an American tragedy for popcorn entertainment. They made Lone Survivor together, about the real-life ambush of a group of Marines in Afghanistan, and last fall released Deepwater Horizon, which graphically depicted the 2010 oil rig explosion in the Gulf of Mexico that claimed the lives of 11 workers and led to one of the worst environmental disasters in history. In those skillfully made films, Wahlberg played real people who had pivotal roles in those events. But in Patriots Day, he plays Boston police officer Tommy Saunders, a composite based on several real-life local law enforcement figures.

During a press conference last month, Berg said he did not want to assign any character “stolen valor,” meaning he didn’t want to ascribe heroic acts to characters who were not involved in them in real life. That’s a misdirect. Berg’s movie, like the two he made with Wahlberg before this, needed a face that was going to help sell tickets. Throughout Patriot’s Day, Wahlberg’s character connects the events by magically showing up in crucial scenes he has no business being in, just so he can drop one-liners, shoot guns, and help turn this tough movie into a more digestible product. Wahlberg is one of our most grizzled movie cops, which has the uncanny effect of making him feel out of place in what, for the most part, feels like a painstakingly accurate procedural. It’s his very Mark Wahlberg-ness that takes you out of the movie. When Paul Greengrass made United 93, recreating the harrowing events that brought down United Airlines Flight 93 over Shanksville, Pennsylvania, on 9/11, he did so using a cast of unknowns. It lent a documentary-like quality to the movie and scraped off any Hollywood glitz to what should have rightfully been some very grim and sobering proceedings.

But Wahlberg is here to do more than put butts in seats. As a loud and proud Bostonian, he is one of the few actors who could hit the junket circuit and acceptably sell this movie. He’s not just the movie’s star, but its ambassador. When Wahlberg first heard about the project, he was hesitant. “When they decided they were going to make this movie, they had come to me and asked if I wanted to be a part of it, and I was like, I don’t think it’s a good idea,” he told the New York Post. He says the script changed his mind. “But then when I read the script, then I realized, oh my God, this is so powerful and so inspiring and such a tribute to everybody: victims, the rescue workers, the police department, the FBI, everybody,” he said. Wahlberg also reminded the paper that, as a Boston native, this was his story to tell. “I also realized that if I wasn’t going to be a part of this, somebody else was going to be and I didn’t know if they would handle it and be as committed to getting it right as I would.”

Wahlberg has mentioned this commitment to “getting it right” several times, a vague goal he hasn’t elaborated on. Ultimately, Patriots Day does its best to honor the lives touched by this senseless tragedy, a mission that’s hammered home and even achieved by the film’s stirring coda, which introduces the real-life people who were affected that day. It’s also a reminder that maybe the most appropriate and compelling way to relive that day is through HBO’s documentary Marathon: The Patriots Day Bombing. When it comes out next week, there’s a chance the movie becomes a surprise hit, much like American Sniper, another action movie wrapped in an American flag, became one around this time in 2015. That’s certainly what Lionsgate is hoping for. But as for Wahlberg’s desire to get it right, marathon survivor Jessica Downes, who was at the film’s press conference last month, had this to say:

Hearing everyone today, the theme is did they get it right? I think that’s an impossible question for a survivor. I think that’s what I realized last night, that this movie is never going to feel right to them. It can feel okay, and it can feel respected, and you can feel proud and be happy that it was done, but right is so hard, because what happened to us was just anything but right.

I don’t think it was anyone’s error or mistake. I just think it’s the nature of this. This was really traumatic. This permanently changed lives. This permanently ended lives. And so ‘right’ isn’t something you can achieve with survivors, but ‘respect’ is. And I do think that the gentlemen sitting behind us ensured that that happened.

For some people, maybe that's enough.