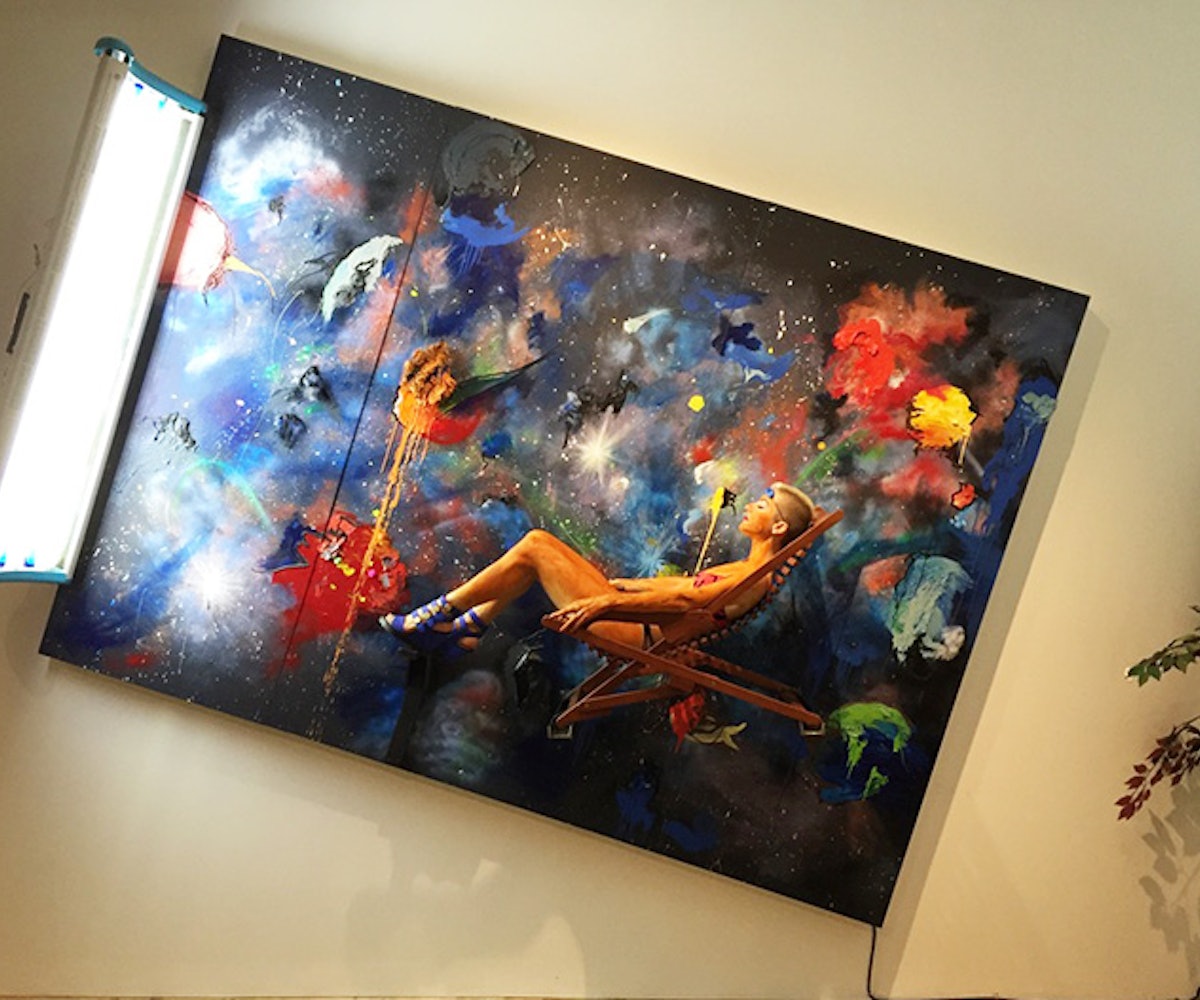 We’re taught to question everything from an early age. It’s how we grow. Some question through writing, others through number crunching; others question through art, and New York City’s Postmasters Gallery is currently housing a show that’s built on questioning the very beliefs we’ve come to accept as true.

Jen Catron and Paul Outlaw, two of the Big Apple’s most exciting artists today, debuted their first-ever solo exhibition at the gallery, Behold! I teach you the Overman!. It’s a full sensory experience, replete with lights, sounds, beauty, the grotesque, water, paint, food, and more. The high-energy of their previous performance pieces and other work is out in full force here and leaves the gallerygoer shellshocked with wonder, awe, and a little disgust.

Take the boat ride, for example: In the middle of the gallery space, surrounded by paintings that could pass for Hieronymus Bosch on LSD, is a mini river designed for a single rider. Once inside, the boat is tugged through a grove of trees. The chaos of the world around the ride is replaced with the chaos of another, more centralized experience that’s jarring but thrilling at the same time. (The very act of being in a boat, in the middle of Tribeca is pretty neat.) That juxtaposition between the “gross” and the “beautiful” is where the show shines because at its heart it's exploring our relationship to mass media, indulgence, exploitation, gossip, and “real beauty.” (Look no further than the tanning bed lamp shining on a very orange Tea Hacic, hovering on a wall before a cosmic painting.) Ascending into a levitating cube, a video of costumed individuals rapidly consuming food brings to mind irksome movie scenes of gluttony, but the humor in the way it’s presented makes it bearable. That thread of funny keeps the show from being too heavy; it’s a little nihilistic, but what can you do when the world is moving at an astronomic rate, descending further and further into these false beliefs? Behold! is a commentary on the comedy of errors we live in. How beautiful. How grotesque. How very New York.

How would you say the show is pushing the culture around us?

PO: Even though it’s more traditional for us compared to what we normally do.

JC: Right. We normally don’t have things in a gallery. We do a lot outside of the gallery scene—more guerrilla-style artwork. It’s a little bit different for us, but at the same time, it’s very experimental. It’s very participatory. It’s about bringing the moral ambiguity of our culture and putting it on a pedestal, but leaving the viewer to decide if they’re going to condemn or support what’s happening. It’s tying into our belief systems and what we’re worshipping and questioning.

PO: Which is also constantly changing. Our belief systems constantly change—individually and as a whole. This particular show is representative of the ideas of belief and what it means for humans, humanity to have these beliefs, and why there’s a need for those beliefs, and how those beliefs have changed, and how those beliefs have been wrong and are still wrong and will be wrong, and some of them are right. But in this show, we wanted to bring the audience into a venue, into a scenario where they are with us and reflecting. Artists have always been a reflection of the society that they’re in, and we want them to be a participant in this reflection, and these thoughts of where we’ve come from and where we’re going to be in the future.

JC: I think that everyone today has a feeling of uncertainty as to what’s going to happen next. We’re trying to tap into that, but tie it in with larger belief systems and the world at large and the culture at large. It’s a big topic to undertake, but we also don’t take ourselves incredibly seriously; so, you know, there’s some humor within the show that helps break up what could be a very serious show.

If you could describe the show, in an emoji, what would it be?

PO: What is the smiling stinky pile of shit? That’s my favorite one.

Two things you don’t want to step on.

JC: It all ties together.