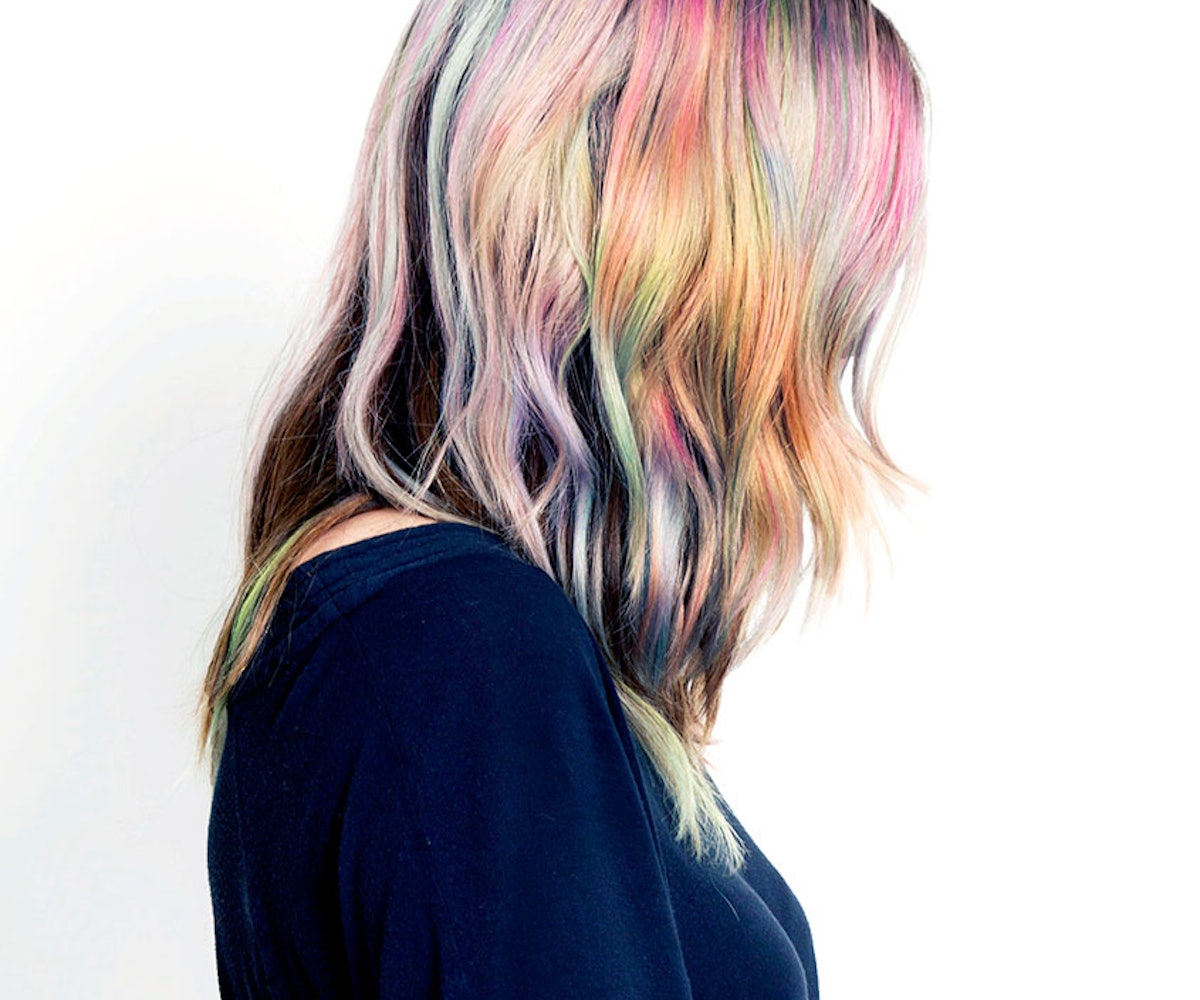 Summer's hottest hair-color trend—or at least the one we're most obsessed with—isn't a color at all: It's an effect. Inspired by the way pearls catch light and reflect multiple iridescent hues, pearlescent hair is the newest, coolest way to experiment with color.

We asked four of the raddest colorists we know to interpret the trend for different hair types, using our bravest editors as lab rats. What they created is nothing short of art—and isn't art you can wear every day the best kind?

Click through to see what they came up with.

In my teens and 20s, I experimented with hair color a lot—first, with bright reds à la Angela Chase in My So-Called Life, and later, inky blacks inspired by Shelley Duvall’s character in The Shining. For most of my 30s, though, I’ve opted for more of an au naturale look, embracing my mousy brown and only occasionally highlighting the lighter bits near my temples. But in my work for NYLON over the past three years, I’ve become increasingly obsessed with all of the root-y platinum blondes and silvery pastels on the musicians I cover, like Sky Ferreira, Alison Mosshart, St. Vincent, and Shura. So, when I was asked to give pearl hair a try, I figured, “Why not?” When I learned hair magician Aura Friedman (responsible for Ferreira’s blonde, not to mention Carolina Polachek’s genius sunbeam splashlights) would be my colorist, I decided to go all in, giving her free reign to do what she may to my head.

“Pearls come in a few different colors, and all of them have a kind of dustiness,” she says. “I think of this as a mother of pearl, iridescent, and multicolored.” First, she lightened the hair and toned it cool, to achieve a dusty, pearly tone. Then she mixed a bunch of Pravana pastels, including some silvery tones to evoke a dusty shimmer. She also included a few dry brush strokes of darker colors to break up the more subdued pastels. Once Friedman was done, stylist Travis Speck trimmed my new pearl hair and accentuated the multi-tonal hues with soft waves using a 1.5-inch curling iron. “I guess the whole idea is that there should be a lot of different colors,” says Friedman, “Almost like when light reflects off of a mother of pearl.”

My hair story is a colorful one to say the least. Ever since I started bleaching my thick, brown curls way back in 2010 (the whole straightening thing is another story in and of itself), I've had every color imaginable. I once explained to a college professor that I don't feel like my true and honest self unless my hair is far and away from its natural hue. So, when I was approached to try out this pearlescent treatment, I jumped at the opportunity.

I've never really experimented with colored hair. Bleaching yes, which totally fried my hair and led me to months of reconstruction. Chelsea at Pickthorn is a master at her craft of hair coloring. Not only did she bleach it and add color, but she made my hair feel better than it did upon walking in. She gradually bleached then added a gradient of pinks and blue to make the color you see now. If you have dark hair like me, you know that a process like this could completely ruin your hair, however I was very pleased with the result. I have a pink/violet/blue pearl hue that peeks out and adds a little more color to my look—and no split ends. My pearl look is subtle and definitely recommended for those looking to add some fun to their hair without a drastic change.

My tresses have always been colored. I've generally always been blonde, but thanks to Kool-Aid packets and a little bit of water, I was able to get sugary-green and sour-blue hair streaks in elementary school. Once I hit junior high, I went all Manic Panic red one evening with a few girlfriends. Not only was my blonde hair bright red, my neck was dyed that vibrant shade, as well. And both lasted for at least a month.