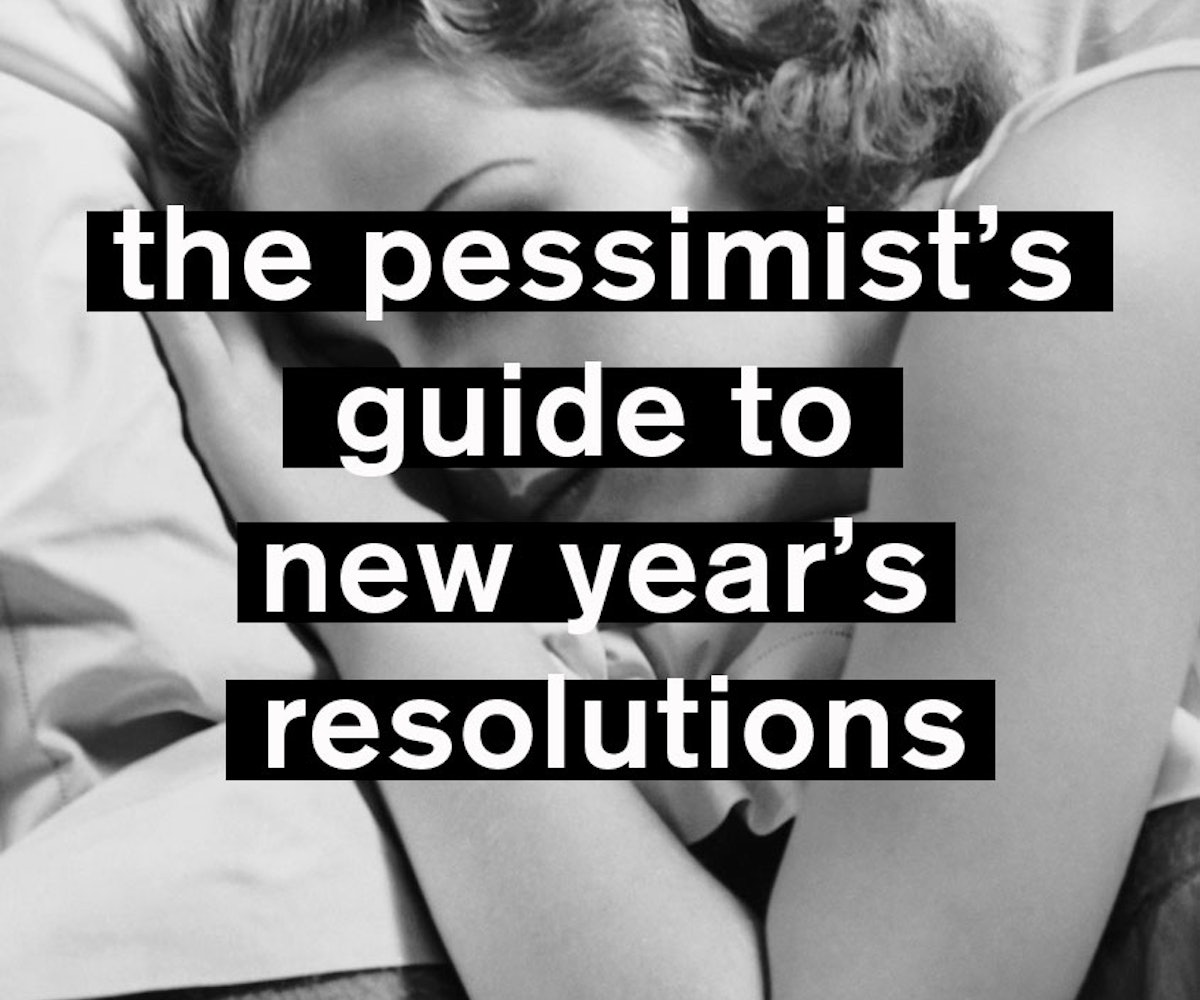 The clock struck January 1 and I tried. I really tried, guys. I bought a ClassPass and signed up for spinning ­twice,­ canceling on both occasions. I’ve declared a “Dry January” and already want to curl up into a ball and die. Do you know how much bars suck when you’re not drinking? Do you know how much all your friends suck when you’re not drinking?

So, I’m throwing all these stupid resolutions into the trash­ bin and starting fresh. I’m about to be 31, which means I’m officially too old to keep lying to myself about my glaring lack of willpower—let alone to you, dear reader.

Thus, I bring you: The Pessimist’s Guide to New Year’s Resolutions. It’s a bunch of resolutions I vow to really stick to, as I’ve set the stakes embarrassingly low.

Don’t, by any stretch of the imagination, think I’ve been actively working toward this goal. I haven’t. Sure, I’ve take a handful of silks classes. Sure, I’m surprisingly flexible. Sure, I was a kid gymnast super­star. But it’s too late for me to join the circus. It’s not that I’m too old (I am),­ it’s that I’ve taken absolutely zero steps toward making this fantasy come true. I don’t know why I believe that, at some point, I’m going to drop all my life’s plans, enroll in a year­long circus school, and dedicate my life to flying through the air. I’m not. I’m the same kid who had to quit gymnastics at 10 after realizing her deep sense of impending mortality. This ship has officially sailed.

It’s weird that my first impulse is to say “yes” to a person I deeply, deeply do not want to see. We dated for a few months in 2010 before you ghosted me? Sure, let’s catch up over some coffee! You’re my weird classmate from college who wants to share her idea for a totally­-never­-done­-before podcast. Yeah, let’s grab that drink! The truth? I really don’t want to see you. I don’t want to see most people. There’s like four people that I ever really wanna see. And even with them, I’m hoping “plans” involve us laying on my couch, eventually drifting off into nap­land. So if you’re down for that, let’s kick it!

7. In 2016, I vow to continue reading so many horoscopes that I devolve into a vortex of terror and self­-doubt, postponing life until Mercury is out of retrograde because I am not taking any chances.

This is a resolution that I 100 percent plan on keeping! No problems here. Let’s keep moving.

8. In 2016, I will stop plucking out my white hairs, pretending that somehow by removing them, they will stop growing and I will stop slowly descending into old age.

I like to invent science. It makes me feel safe and indulges my distaste for actually researching things. That’s why I dutifully pluck out my white hairs, because “science” tells me that if I don’t see them, they’re certainly not in the process of growing back. Okay, I lied. But what’s the alternative? I let them live atop my head, multiplying in number until they’ve completely taken over? Then what? I have to start dying my hair? Like my mom? What’s next? Non­-ironic fanny packs?? Dinner at 4 p.m.? Telling the same story over and over again with no discernable point? I’m not ready!!

Except when I’ve had too much to drink, reinstalled all my apps, and indulged in an epic right­-swiping binge, waking up the next morning only to discover I’ve drunkenly agreed to go bouldering in Staten Island with some dude who’s in an open relationship.

10. In 2016, I will accept that my lifelong cohabitation goals actually involve three of my wiliest lady friends living in a split­-level house in Miami, ​Golden Girls​ style.

Look, I’ll find a nice feminist guy who’s acceptable to my folks. We’ll get married in a ceremony that’s traditional, yet folksy in the way that’s fashionable these days. I’ll pop out a baby. Maybe two. We’ll talk about being the kind of modern parents that split chores à la Sheryl Sandberg’s advice for powerful women but despite his good intentions, I will bear the brunt of the child­rearing. We’ll age. Our kids will go to a solid college but hafta take out student loans because we weren’t financially savvy enough. Time will march onward. My husband will get sick. He’ll eventually pass, as I tenderly hold his hand in mine.

The party starts! Me and all my favorite bitches are buying a house in South Florida and getting wacky AF! There’ll be hijinks! There’ll be cheesecake! There’ll be “'90s Throwback Nights” at the local bingo hall! And I literally cannot wait.

Now, I invite you to create your own totally achievable New Year’s resolutions! Because let’s be real: You just want to continue sitting on your couch, binge­-watching Making a Murderer, anyway.

Please tell me I’m not alone here. You, too, wear the same ol’ brassiere day in and day out, right? I know it sounds gross, but hear me out: A good bra is extraordinarily expensive and hard to fit just right. When you find the perfect one, it’s your God­-given right to wear it every goddamn day. The bra will then start molding to your body like one of those foam­-core pillows, fusing to your chest until you and your undergarment become one and the same. Though (thankfully) all my partners have withheld judgment thus far,­ I’m wondering if 2016 might be the year when I at least alternate between two disgusting bras. It’s worth a shot.

Let’s be real, I probably have another few days of sobriety left in me and after that it’s anyone’s guess how it’ll all end. In preparation for my inevitable “Dry January” failure, I’m just going declare that in 2016, I will try to not cook drunk. This is not because I’m not an excellent inebriated chef. I am. In fact, I’ve successfully cooked drunk­-bacon, drunk-brownies, and drunk­-Brussels sprouts on many, many occasions. But I can’t count on my dumb luck forever. So, for the health and safety of my apartment (and myself): I will herein rely on Seamless and abstain from trying to prepare that cute “egg in an avocado” dish I saw on BuzzFeed ­when drunk.

Yes, I put it in the calendar. Yes, I reserved my spot. Yes, I made a protein shake. But this bitch still ain’t makin’ it to the gym. So, why do I insist on wearing sweatpants all day with only the merest hope of moving my body? In 2016, I’m getting right with God. I’m going to put on normal clothes like a normal person, accepting that I’m not going to “pop into a light Kundalini class” after work. It’s just not going to happen. Instead, I’m going to meet my friend for a Negroni and then try not to drunk­cook later that evening.

I will also stop talking about how I’m going to get a tattoo. I’m not going to get a tattoo. I know I seem like a person that should have a tattoo, at least one of those “starter­ tattoos” you sport on your wrist, but I’m not. I’m a neurotic Jew who has second­-guessed every appetizer she’s ever ordered. Should I have gotten the kale side salad? Will crostini really fill me up? I DON’T HAVE THE ANSWERS FOR EVERYTHING, GODDAMNIT! So yeah, needless to say, I probably won’t be committing needle to arm this year. Or any year.