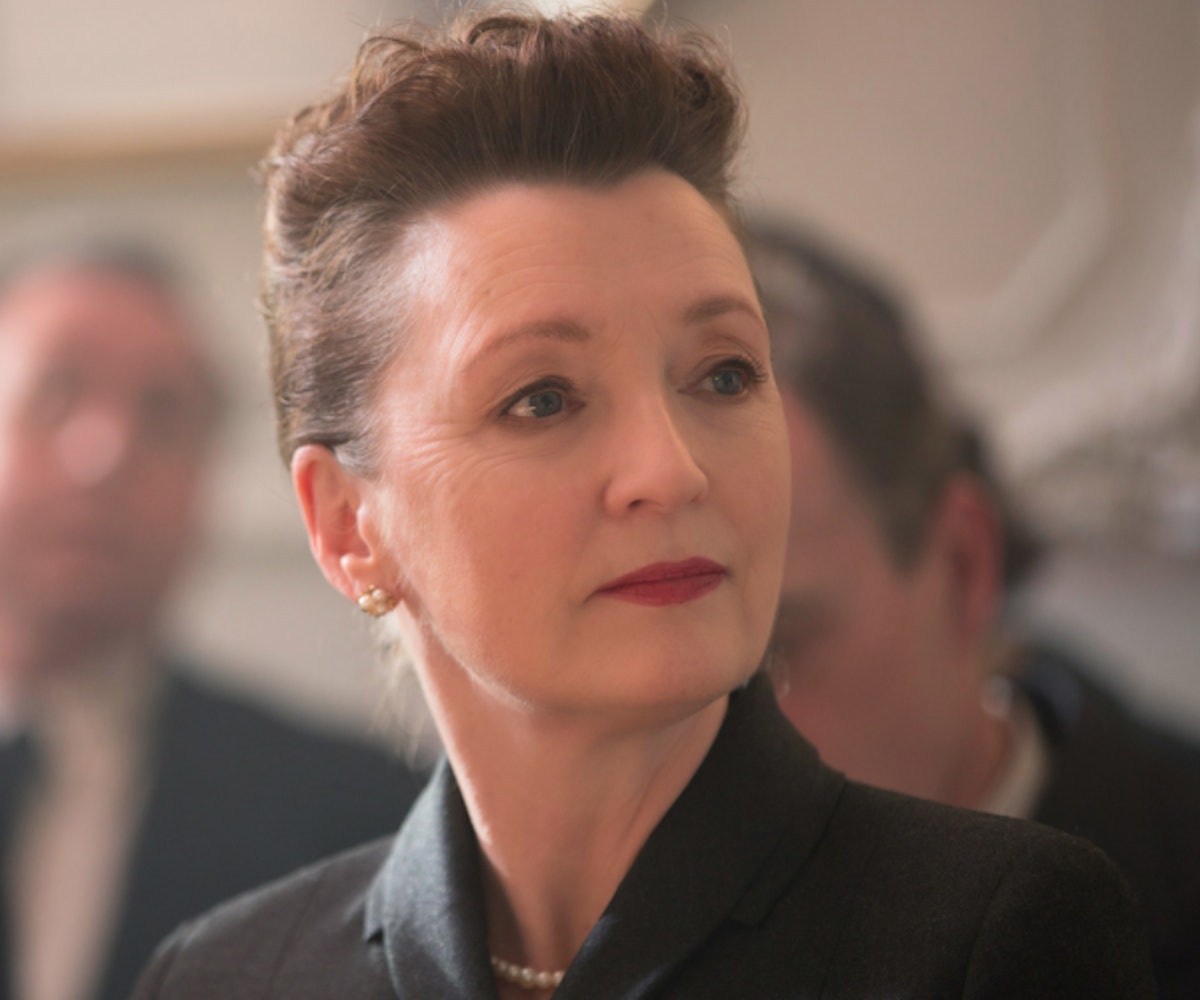 A little while ago, a friend asked me, semi-jokingly, if the "phantom thread" at the heart of Paul Thomas Anderson's latest film, Phantom Thread, was, in fact, love. It was funny because reducing such a complicated, beautiful, devastating film in that way felt so wrong, but it was also funny because, you know, maybe it's not untrue. Love binds together the film's two protagonists, Reynolds (Daniel Day-Lewis) and Alma (Vicky Krieps), but it also encompasses a third character—Reynolds' enigmatic, diligent powerhouse of a sister, Cyril.

Played exceptionally by Lesley Manville, Cyril is a character who would—as a knowledgeable older woman whose position in the eyes of a powerful man might be threatened by the introduction of a naive younger woman—typically serve as little more than an archetypal foil to the younger woman, a one-dimensional stern, punitive figure. But that's not what Cyril is at all. Rather, as embodied by Manville, Cyril is a woman of action and empathy—who is so secure in her own role and importance that she isn't afraid to tell the harsh truth when it needs to be said—who plays a pivotal role in our understanding of who the other characters are. Below, I talk with Manville about what makes Cyril tick, what it's like to work with Anderson, and how Cyril is like a 1950s Donatella Versace.

Ever since I saw Phantom Thread, it's kind of all I’ve been thinking about.

One thing I loved is how the film's artistry so beautifully parallels the artistry on display within it.

There’s a lot of sewing in it! You really get to see the work, the world of the work, rather than just it being glossed over. He makes clothes, and you really see that world. And I think that’s important. All of those women who are in it, who work in there sewing.

A bit. Well, Daniel and I filled in some gaps, and we created a kind of history scenario for them, and just things like parents and nannies and a kind of flavor of the lifestyle, but we both, intrinsically, knew what it was, and what seemed to be more crucial was that Daniel and I, as Daniel and Lesley, developed a friendship that we could then take and adapt it to how that friendship and familiarity would exist for Reynolds and Cyril. Daniel said, “We need to get to the point where we can just be in the room together having breakfast or whatever and not say a word and that it’s comfortable.” And we achieved that. These are people that have breakfast together every day, but they don’t have to talk, and it’s perfectly easy.

But, you know, [Reynolds] is a bit rudderless without her... He’s a bit like a kid without their mom when Cyril isn’t there. But she’s quite a forceful person with him, she’s had to deal with lots... she’s got rid of his girlfriends. You sort of think Cyril should tell him to deal with his own problems himself, and tell him that it’s his mess. If he thinks it’s a mess and he wants to get out of it, he’s got to get out of it himself. But that’s not what it is. They have this odd, strange relationship where she takes care of things for him.

And it’s clear that Cyril recognizes Reynolds as a genius and doesn't at first know what to do with Alma.

I felt like Cyril recognized that Alma was also going to be able to give Reynolds something that Cyril couldn’t. Cyril could do all of these other things for him and take care of his problems, but there’s only so far that kind of relationship can go. And what I liked also was the disruption of the type of narrative that features a triangle of a man and an older woman and a younger woman coming in and messing everything up, wherein the more established woman often wants to get rid of the younger one. I loved that this didn't happen here.

I mean, it’s a slow burn, she gets to like Alma slowly, but you know, all of these things kind of… I mean yes, some of it’s in the script, but it isn’t, as well. Paul didn’t write stage directions saying, “Cyril looks suspiciously at Alma” or “Cyril smiles at Alma,” which is a kind of turning point later on. I mean, all of that, we shot it roughly chronologically, it’s how it became. And it was very good that we had the freedom to do that, that Paul isn’t dogmatic, he’s not strict. He’s cast three very strong actors, he wanted our collaboration, he doesn’t want to be dictatorial about it, it’s up for grabs. And, of course, sometimes I might do things and he maybe thought they weren’t right or whatever, but I had an enormous amount of freedom to do what I wanted with it, and he likes that, he liked watching it and seeing it develop and see where it might go.

That’s a wonderful thing to hear. I think people might assume that someone with such a singular vision would perhaps be dictatorial on set.

He knows when things are right or if things are not going... that they’re not right. But yeah, he’s not prescriptive in that, which is great.

How much research did you do into the couture houses of London of the mid-'50s?

I read because I wanted to get to understand the world, so it’s there without consciously having to think about it. You want to do all that groundwork, all of that research, so it’s there and then can earn its keep in ways that are not always perceptible. But it was joyous to do it. I love clothes anyway—I really do love clothes. And I’ve done work that deals with that period before. So, historically, I knew quite a bit about the period. But I was just doing a lot of reading about fashion houses in that time, and it was interesting how many of the houses did have a family member working closely with the designer—it wasn’t an unusual situation. It keeps everything in the family, keeps it safe. And even Versace more recently, he worked with his sister, Donatella, but obviously, in Cyril’s case, she’s the backbone of it. She’s not a creative, but she’s keeping the house running and hiring and firing staff... and girlfriends [laughs].

Phantom Thread is out in wide release on January 19.