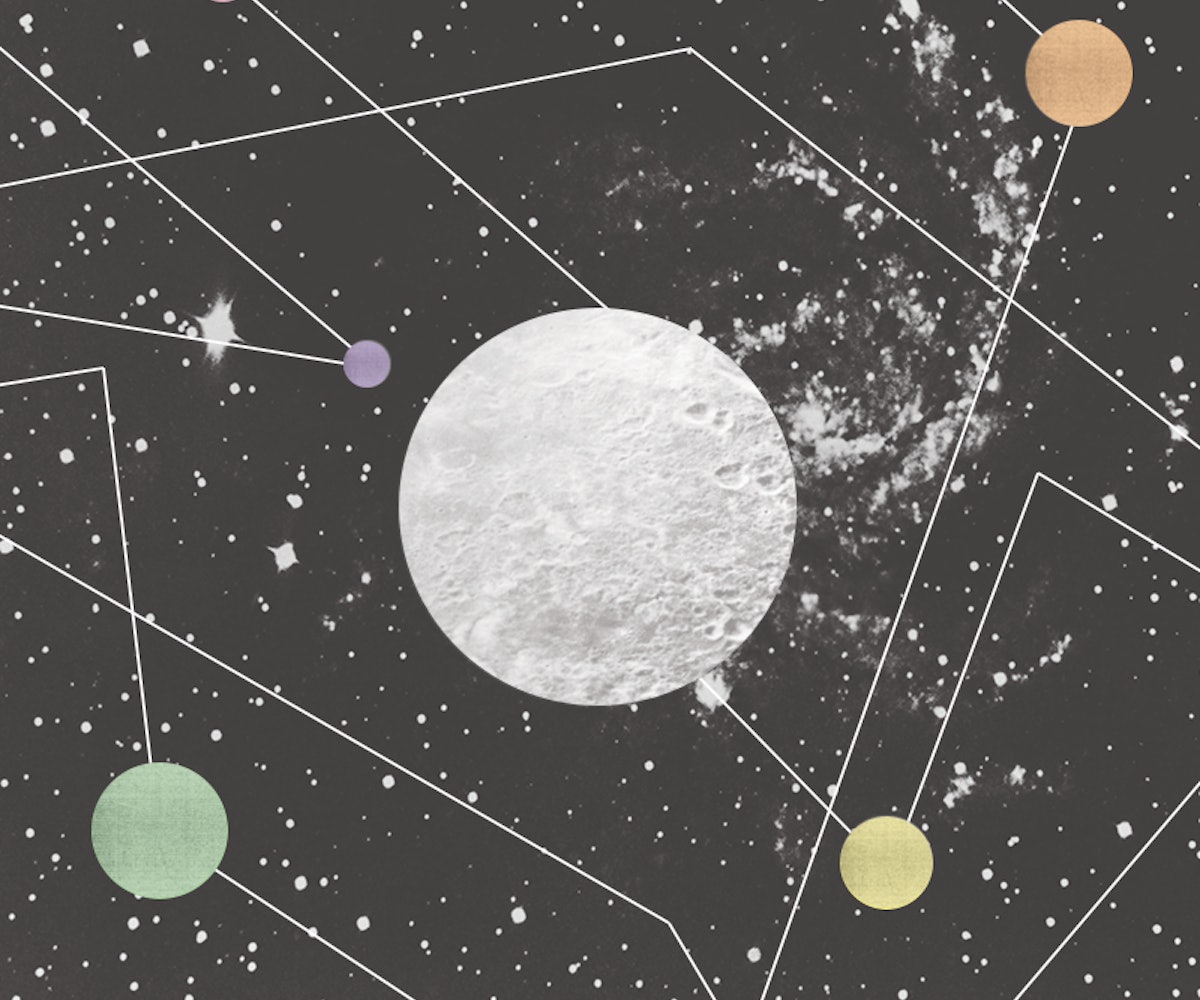 There’s a strange, paradoxical energy coursing through the air this week as glamour and opulent illusion spars with the unrelenting fight for recognition and the protection of our boundaries. Sounds like something out of Showgirls, right? Right. That’s all thanks to the Pisces full moon and lunar eclipse tonight, the catalyst for wild emotional hissy fits and a powerful generator of intense interpersonal drama. For those touched by this eclipse—specifically, Taurus, Cancer, Pisces, Virgo, Scorpio, Sagittarius, and Capricorn—life will quickly begin to mirror a soap opera, gradually tapering off as the moon wanes again. Escandalo!

Every sign will feel the sonic boom of the Pisces eclipse, in the form of unexplained moodiness either in themselves or those close to them. Relationships are bound to take a hit from this shift, and some signs (I’m looking at you, Aries, Aquarius, Libra, Leo, Gemini, and Sag) might become frustrated and completely throw in the towel on otherwise functional, pleasant pairings. Patience is always key with these signs, but with such downright bratty energy generated by this cavalier, intense lunation, some might find that ending associations and relationships are the best strategy for long-term happiness and success.

This blend of energy is the perfect ecosystem for personalities with tendencies toward self-absorption, narcissism, and pretense; to put it plainly, those that could be described as divas, rock stars, and jerks are in their element to come out of the shadows and take the stage—for better or worse. A kind way to describe the intensified self-importance might be an “artistic temperament” (think: Kanye, a classic Gemini), driving some to lash out for no apparent reason other than passion and feeling. These same people could find themselves becoming completely obsessed with others’ opinions and perceptions of them, feeding off the pure drama of being the center of gossip. Even negative attention is nourishing to the weak ego, and some might even make a point of playing the villain or bad gal or boy just for the sake of basking in the controversy or outrage they’ve sparked.

Keeping a firm grip on the wheel of your emotions isn’t going to be easy for any sign during this lunation, and those who struggle with a hot temper should be extra vigilant about keeping a cool head. Childish temper tantrums are easily set off, especially for people working through past childhood traumas. Relationships with parents may be especially strained during this time—the cracks in your bonds within your family will be easily highlighted by this moon. If domestic or family problems arise during this lunation, they’ll be a focal point for your development over the next three months.

The otherwise-cool Pisces full moon will be square to Mars, the red-hot fiery war god of straight winning, creating a highly volatile, explosive mix of emotion and intuitive passion. Our most intense moods, emotions, and desires are brought to a head, and in some cases, to crisis. The only strategy—especially for air and fire signs, as well as Scorpio—will be to channel the raw energy and emotion into a project, likely one that will satiate a great creative desire or be a big money-maker. Otherwise, this brutal energy might drive the most intense signs into a campaign of sexual conquest and self-sabotage. The flipside, of course, is the need to be free with sexual expression. Topics like slut-shaming and sexual freedom will be on the tip of every vixen’s tongue, and heated debates around thwarting liberation and erotic expression could inspire a firestorm of collective anger and outspokenness.

The golden thread tying the moon and Mars together is a competitive spirit, especially when it comes to families, groups, teams, and squads. Signs like Aries, Scorpio, and Sagittarius are bound to put up their dukes for the greater good of the group or family’s progress. However, these signs could ultimately injure themselves by going too hard and becoming too persistent in the face of patience. Courage and ambition will flood in for these signs, making them the fearless pioneers dedicated to pushing the boundaries of their dreams into new and exciting territory. Throwing your entire heart into a project seems pretty tempting right now, but keeping your stamina and interest high enough to see your endeavors through to a perfect finish is a major hurdle. If you do embark on such a journey, make sure to work quickly so that you aren’t tempted to jump ship on the project, ultimately blemishing your reputation and bruising your ego. Protect your energy levels, too: Those that charge in head first will come away with the battle scars to prove it.

Many who witness interpersonal injustice and unfairness will try to right wrongs, like breaking up fights or stepping in as an unsolicited ref. Though you might feel like you’re doing the right thing, those who unwittingly get involved in others’ drama could spark violent outbursts and scuffles. Be careful when going out to bars and crowded party environments during the next few days; the conditions are just right for bar fights and silly shows of violence. The less-literally violent aspect of Venus’ position to the Pisces moon is overt people-pleasing and passive aggression. Take care to not become a doormat in the process of keeping the peace. We may become so intensely aware of others’ sensitivities in social situations that the only way we can truly help is by taking a giant leap back into our personal spaces. For some, this means becoming introverted and even isolating to cope with the intense tidal waves of emotions rocking our sense of duty and self-awareness, especially for water and earth signs.

Signs like Virgo, Scorpio, Pisces, Capricorn, Taurus, Aquarius, and Cancer could become overly obsessed with balance, fairness, and the pursuit of perfection. At the same time, many of these signs may be hypersensitive to criticism, even helpful critique, making them prickly and cranky to deal with. These signs have the greatest hold on the manifestation magic associated with this moon phase and might notice how easy it is to simply wish things into existence or meld the energy to support conquesting for what they need and want. Though it won’t be all peaches and roses for these personalities; there’s bound to be haters (or simply reasonable people who disagree on ideals or strategy), but because the stakes seem so high for those affected by the eclipse, we may see some serious muckraking and shots fired quite publicly, even embarrassingly so. Stay off Twitter!

Having the courage to take a bully’s crown in the open with cutting wit and sheer intelligence seems to be a personal mission. Some will completely fall on their face, causing more harm to themselves and failing to balance the situation, but others will unlock a brand-new type of courage and heart that they have never experienced before. This awakening will likely be the key to unlocking the iron doors of the big challenges on the future’s horizon and fortifying us for the battles that truly matter.