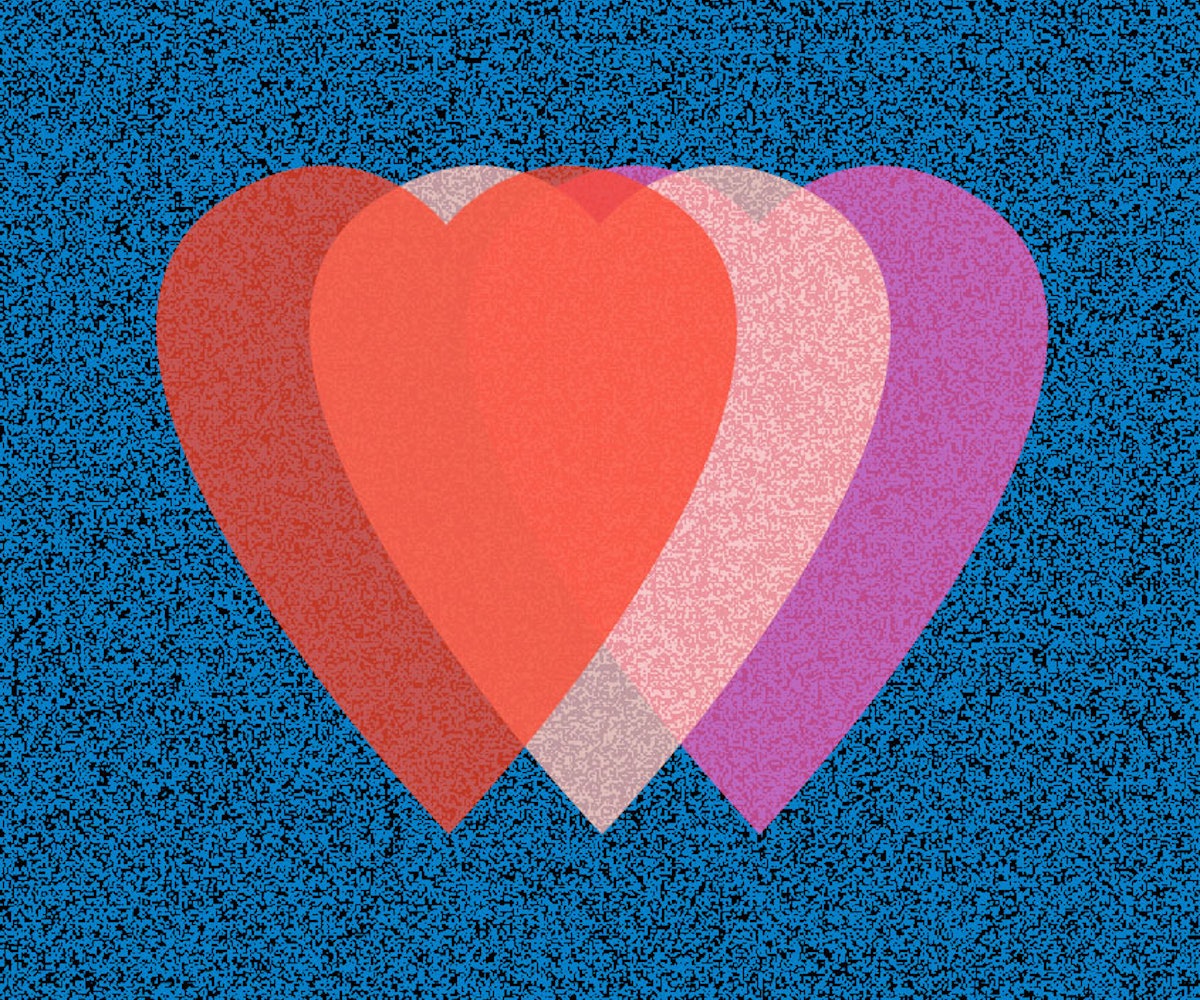 I’ve always felt bewildered by people who have strong opinions on relationships that don't involve them. After all, love and its many dimensions can only be truly understood by the parties involved. One sort of love that always seems to conjure judgement is polyamory—and with those opinions comes an inevitable bucket of misconceptions.

To keep that conversation going, click through the gallery to read some common polyamory misconceptions, and the accompanying truths from myself and others who have lived the polyamorous lifestyle and found deep physical, emotional, and spiritual satisfaction.

Truth: Polyamorous relationships, like all relationships, don’t look one way. Assuming they hinge on a group-sex dynamic would be like assuming that all heterosexual couples have missionary-style sex every single time (not that there's anything wrong with couples who do that).

The best practice is not to assume. This post on polyamorous relationships from The Huffington Post digs deeper into the discussion around common assumptions—which are almost always problematic. It reminds us that just because people think they get it doesn’t mean that they actually do.

Ginny Brown, star writer at Everyday Feminism, spoke of her enlightened opinion on misconceptions of polyamory. “One of the biggest misconceptions is that if you're poly, you must like to have a lot of sex, with a lot of different people. That's certainly true of some poly people, but many of us find it pretty rare to find a new person we actually want to get it on with. I know for me, the heart of polyamory is in the family I can create, with my partner and their other partners and our extended network. There's a certain kind of intimacy you can have with friends when there are no rules about who you can and can't be sexual with. There's no guessing or hinting, or feeling like you have to avoid getting too close to someone who is 'taken.' If attraction develops, you can deal with it, and it's not weird or difficult. And for me that makes all my friendships closer and more satisfying—even though, for me, attraction is pretty rare.”

2. Myth: You can’t truly love more than one person.

Sam Dylan Finch, founder of Let’s Queer Things Up!, cited similar sentiments. “One of the biggest misconceptions is that polyamory means that we are dividing up the love that we have, which is supposedly finite, amongst our partners so that we aren't capable of loving them as much as monogamous partner would. I want to ask those people if, as they have more kids, more pets, more family members, more friends, if they love each of them less as their social circle grows. Since when is love a concrete and finite thing that we divvy up like gum balls?"

Finch continues, “The love that I feel for the people in my life, platonic or romantic, does not become compromised each time a new person enters my life. When I was born, it's not like my parents suddenly loved my sibling any less. With this rationale, we'd apparently all be having one child, one pet, one hobby, one band that we listen to, one food that we eat, one outfit that we wear... because we can only love or like one singular thing at a time, right? It's silly.”

Human beings are emotional creatures, capable of feeling any number of things at a given moment. To believe we’re only able to love one person at a time is an insult to our abilities, and a closed mind to new possibilities.

Trust is something you build, and people within relationships of any size may struggle with this. Let’s not pretend that monogamous relationships are jealousy-free because there’s only one person to get paranoid about.

Truth: Contrary to popular belief, polyamory is not only for queer people. People of all sexualities can choose to be in non-monogamous relationships. The idea that it’s a gay thing undoubtedly stems from deeply rooted stereotypes that paint the gay community as somehow more sexually promiscuous than the straight community.

In Psychology Today, Deborah Anapol Ph.D. explains that while gay men are statistically more likely to practice polyamory than heterosexual couples or other members of the queer spectrum, the fears and experiences may be very similar—like that jealousy is the biggest deterrent to polyamory.

5. Myth: You can keep adding people to the relationship indefinitely.

Truth: This is a big no-no. Polyamorous relationships are not like buffets or Pokémon. Your goal is not to grab a little bit of everything or to catch 'em all. The conversations around adding someone new to the relationship are ones of deep and serious consideration. If and when someone new joins the relationship or becomes part of one or both partner’s lives, it’s because they (hopefully) fit in the lifestyle or dynamic that they’ve got going and enhance it.

Truth: Let's be real here. Saying that something is a phase dismisses what a person thinks and feels, and is nothing more than a put-down stemming from discomfort.

Denim on denim is a phase. Straightening your hair is a phase. But polyamory, if it works for someone, can find a permanent place in their life.

7. There’s no future in polyamory.

Sure, marriage laws may not be on the side of polyamory, but since when has the prospect of marriage ruled whether or not a relationship should be pursued? If we were to judge straight monogamous couples based on the shocking divorce statistics, we might say there’s no future in heterosexual monogamy.

Currently, polyamorous couples cannot pursue multiple marriages or a marriage which includes all partners. This is not to say all polyamorous people want to get married, but they should at least have the option. There are more ways to love than just monogamously.

However, it’s important to point out that there is no singular "right" romantic or sexual choice for people, because neither monogamy nor polyamory promise a happy, pain-free future. Ginny Brown says it best: “I'd never claim that poly people are more enlightened, more honest, or more evolved than monogamous people... We're capable of all the same horribleness, it just looks a little different.”