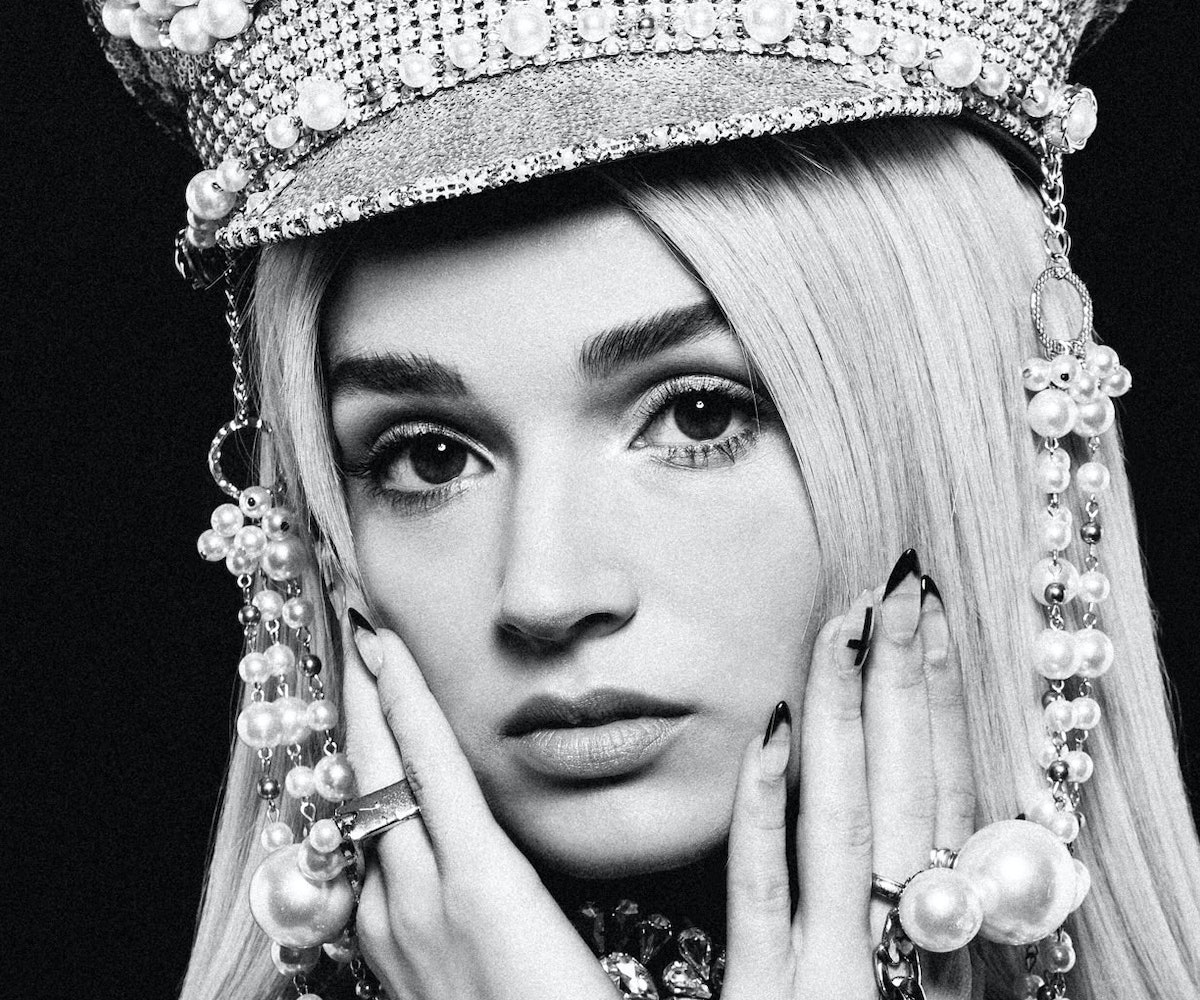 What’s the deal with Poppy? It’s been years since her infectious introductions and plant interviews first took off on YouTube, and it’s still pretty hard to nail down exactly who—or what—Poppy is. Today, Poppy herself continues that line of questioning as she drops her sophomore album, AMIAGIRL? She tells us the album title means exactly what it asks: “Some days I feel like a boy, some days I feel like a girl, so I haven't figured it out yet.”

The album doesn’t seek to answer that through its songs—AMIAGIRL? is 15 tracks of sugary sweet, robotic goth-pop, three-quarters of which explore “fashion and identity” before moving onto “uncharted territory,” an introduction to the pop-metal sound Poppy wishes to further develop.

As a Hollywood resident, Poppy has become mesmerized by the vanity that surrounds her every day, something she explores on the album. “I'm fascinated by people's obsession with how they look and how humans really do judge you within the first few seconds of meeting you,” Poppy said. What she also finds fascinating, she added, is “how people don't try to check facts first, and they just draw their own conclusion.”

Perhaps what's most intriguing about this stance, and Poppy's fascination with judgment and vanity, is that she leaves what we know of her up to speculation. Even when giving a relatively long answer to a question, Poppy reveals little to nothing that we can latch onto, dig further into. It’s all very surface-level, but Poppy is clearly so much more than that.

Perhaps Poppy’s interest in the immediacy with which people will make assumptions is what lets her reveal so little. When I asked Poppy about what she hopes fans, new and old, will learn about her from this album, I’ll admit, I asked the question twice—once, referring to Poppy, and a second time, referring to her as Moriah, the singer’s legal name. Without any hesitation, Poppy replied, “Well, there’s nothing to learn about [Moriah]. There are only things to learn about Poppy, because that’s me.” If Poppy’s obsessive fans haven’t already figured out “how much I like fashion” and her tendency to jump from genre to genre, they’ll learn about that, but not much more.

After speaking with Poppy, reading through all of her previous interviews with various publications, I kept thinking about “A Cyborg Manifesto,” an essay by Donna Haraway. If you didn’t pore over feminist theory in college (shout-out to my loans), don’t worry. I won’t overwhelm you with the intellectual jargon. Essentially, in the essay, Haraway uses the notion of a cyborg as a metaphorical way for women to escape the traditional limitations of gender and feminist language.

Now, I’m not trying to inscribe Poppy in the greater discourse of feminist theory by drawing these comparisons, but maybe Poppy chooses to function as a cyborg-esque figure, questioning gender, questioning identity, as a human below, thus forcing us to not discuss Poppy in the same way that female musicians have been discussed for as long as pop music has been a thing. In return, we’re forced to question Poppy’s motives, Poppy’s inspirations, in much more intricate way because she refuses a very fundamental descriptor.

For songs at a time, Poppy sings of shopping and putting on makeup, sticking with vanity-riddled themes. Of course, these aren’t things that I’d prefer to be read as inherently associated with women, nor would I consider ruminating on them as something anti-feminist, but as they coincide with a titular questioning of gender, they’re something to consider.

There’s no breaking away from Poppy’s refusal of human-hood. On “Interlude #1,” we’re taken back to the startling introduction many of us had with Poppy, 48 seconds of mechanical noises undercutting a garbling repetition of the singer saying, “I’m Poppy.” Poppy refers to it as “the I'm Poppy machine being assembled.”

There’s a second interlude, another moment where we’re reminded of Poppy’s mechanical aspects. This interlude, Poppy tells me, is “an intro to the new chapter.”  The singer plans to toy with a darker pop sound even more in the future, mentioning that she has artists ranging from Gary Numan to Nine Inch Nails and Skinny Puppy on heavy rotation as of late.

Though the change in soundscape is new for Poppy, the subject matter and imagery illustrated by the lyrics is intrinsic to the evolution of Poppy as a phenomenon of the internet.

Poppy’s first video to go truly viral no longer exists online in its original form, but was titled “How to Load a Gun.” The content is pretty self-explanatory, but Poppy pointed out, “I didn’t even fire it or do anything. I just loaded it.” Poppy isn’t quite sure why, exactly, this video caused her to rapidly gain followers and views, but suggests, “maybe they just really liked seeing a very sweet, innocent-looking girl with a very deadly weapon.”

Poppy mentions that the video will be re-uploaded again at some point—a decision which, in a year where 297 mass shootings have taken place in the United States, feels tone-deaf and shock-producing.

Poppy sings in the first verse, “I wanna love everyone/ Empty every bullet out of every gun/ Please take me back to where we began,” but then flips moods in the chorus: “Get me, get me bloody, please get me bloody/ You can get down on your knees if you're naughty.” Rather than blending the sonic inspirations across the album, Poppy directly flips from a sound suitable for a children’s album during the verses to the furthest extent of her dabbling with metal. There’s no in-between. She’s both calling out for peace and wishing for violence, not acknowledging that these two things must be mutually exclusive.

If you think too far into Poppy, it becomes difficult to enjoy Poppy. AMIAGIRL? provides no emotional relatability, nor does it convey any broader messages that are easy to latch onto. It’s catchy and palatable; a polished work. But it’s just that until Poppy decides to reveal more, or until listeners and observers of the Poppy machine go mad trying to gain a deeper understanding of who or what Poppy is. Is she even a girl? I still don’t know.