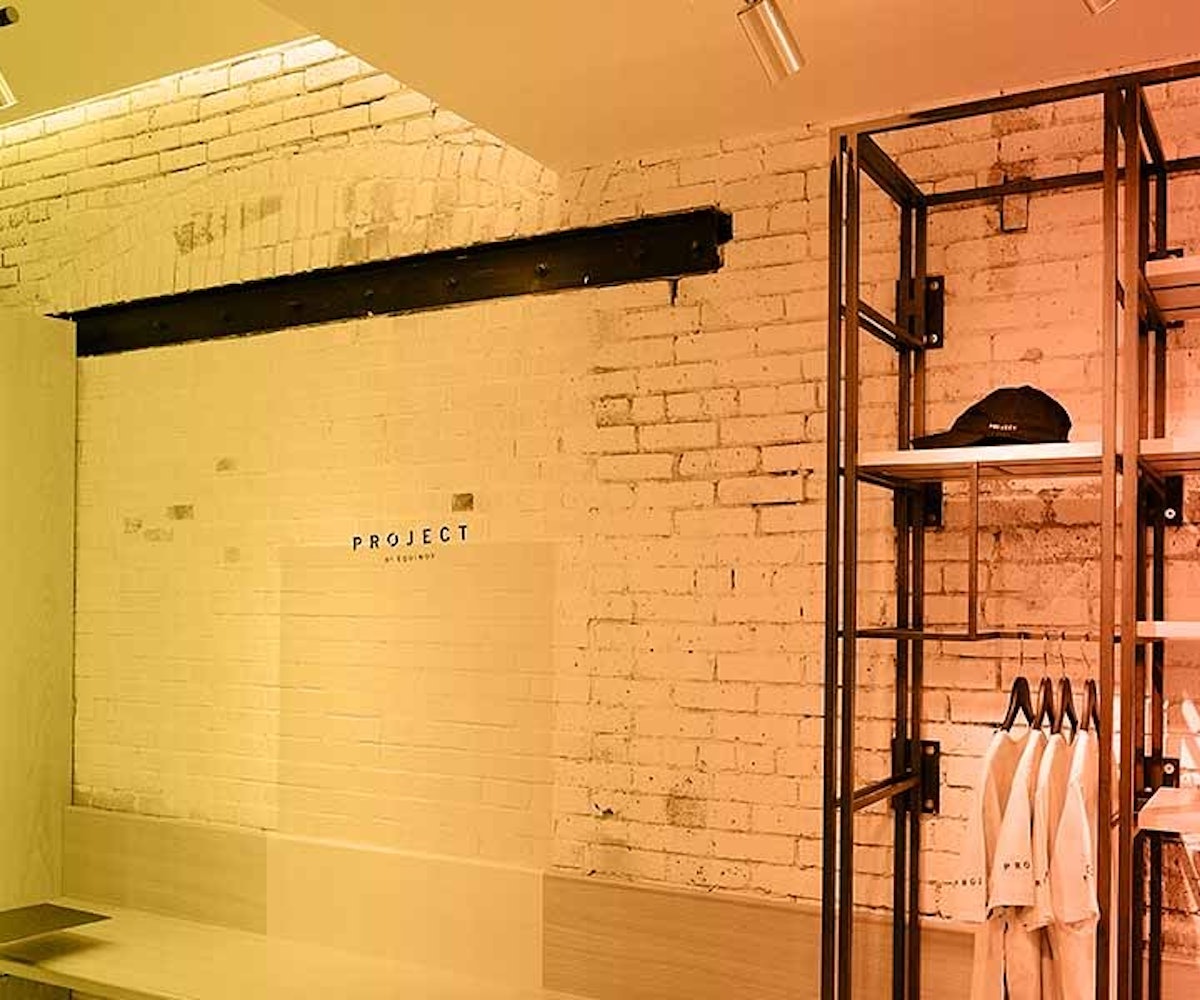 If this is what it feels like to work for a "bikini" body, I thought as I flung a set of battle ropes against the ground as fast as possible. I don't want one anymore. I was at a HIIT (high-intensity interval training) class at PROJECT by Equinox, the premier gym's newish class space in Manhattan's SoHo, and my arms felt like they were going to drop out of my shoulder sockets with exhaustion.

I should have known it was going to be a particularly intense and focused workout when, at the start of the class, the trainer, Nike's Kirsty Godso, said, "Eight people canceled today, so it's only you three." Yes, it was a Monday evening, but there would be no beginning of the week respite from doing 100 battle rope reps, 20 squats while lifting 16-pound balls, and uncountable burpees (done three times!!!) as only one (!!!) section of the 50-minute class. Yeah, it's not a workout for the faint of heart. The only other time my heart rate has skyrocketed so fast was when I saw Beyoncé in a surprise concert. But while I would happily see Beyoncé again, I felt like I never wanted to go back to this particular class.

However, to be fair, it was precisely that rumored intensity that made me sign for this class in the first place. (Plus, I liked the Instagrammable space that everyone on my feed seemed to frequent and the free Juice Press cold brew coffee—I am kind of easy to lure in that way.) Ranging from low-impact full-body toning classes to conditioning circuit-style trainings and strength-building yoga, PROJECT, as I learned over the course of a month (because, yes, I did go back), has something for all.

"When we first put the schedule together for the launch of PROJECT, we wanted a diverse offering amongst our trainers, tapping into different categories of training—HIIT, sculpt, strength, dance, etc. Finding a class that does not feel 'gimmicky,' but rather executes a beautiful and cohesive flow/transition for an exceptional experience, is what we were always looking for," says Vanessa Martin, PROJECT's studio director. "Also, the 'incubator' nature of our space is to test-drive all types of workouts and gain insight on guest feedback, to better understand what the population is interested in and would like to see more of in the future."

After establishing the categories of classes they thought their audience would want to see, Martin says, the core trainers were hand-selected. Some trainers are recognizable from social media (Godso, occasionally The Bachelorette's Peter Kraus), others through workout classes you might have taken in the past at studios like Bandier or SLT (Bec Donlan, Patrick McGrath)—all come with a distinct personality and teaching style.

"As studios tried to keep up with the demand [of boutique fitness classes], the quality of instruction, to align with growth, became very structured and methodical. The energy from trainers was muted as their personality while teaching became taught rather than created by the individual instructor," says Martin of the importance of vetting their instructors. "A primary trait that is shared by all of our team is an entrepreneurial drive. A PROJECT trainer must not only be willing but must also crave the element of creation and ownership. Instructors that come through our doors vary in many different talent metrics, and that is the beauty of PROJECT."

So while Donlan's Babes and Bands (a booty-focused sculpting and toning class), encourages attendees to capture their sassy twerking for Instagram stories, McGrath's Sculpt + Strength (a pilates-strength training fusion), is 50 minutes of focused don't-stop-until-you-drop buildup that resulted in me getting a sneak peek of my first abs.

Another trait that they all share: none will let you phone it in. With classes smaller than what you normally see in a studio setting, there is no way to fake it from the back row during push-ups. Martin says, more importantly, it helps to build a community. "Smaller class sizes give our trainers a true opportunity to connect with guests before, during, and after class. It has been remarkable witnessing the fit fam we have created at PROJECT in a small amount of time in our studio," she says. "They also lead to more personalized attention, form correction and ques, and all-around experience! I’ve done kick-backs in a crowded room before… it is not fun!"

With more eyes and pressure on me to make it through classes, I worked out harder than I have ever in my life. Whereas in other cardio classes, I may have previously held back on jumping jacks and plyometric bench exercises shielded by other students, during Megan Roup's The Sculpt Society + Bench (a nonstop calorie-burning workout involving dance), I not only kept up, but pushed myself to go faster. In Traci Copeland's Namaste Strong, my favorite yoga class that I have taken to date, I found myself stretching further than I thought my body could. And if there was any doubt that it was some sort of placebo effect, when, in-between PROJECT classes, I went to my regular classes, I found myself going faster and lifting more weights than previously.

It was after seeing the change in me in other classes that I realized that PROJECT truly offers all that one needs to get a body that's the perfect combination of strong, toned, and flexible—a fact that Martin later confirmed. "One of the unique factors behind PROJECT is that a guest can essentially plan their whole week’s workout all under one roof," she says. After a month, with three classes a week, I was in the best shape of my life. I had definitive abs, stronger arms, and, best of all, a better fitness endurance that has made it significantly easier to get through classes I'd previously thought to be unbearable. And while $35 (20 percent off, for Equinox members) a pop is not cheap, these classes were the closest thing I'd experienced to pricy personal trainer sessions.

Was it hell in the beginning? Yes! I've never said, "I am not going back" more times following a workout. But was it worth it? Just ask my new abs.