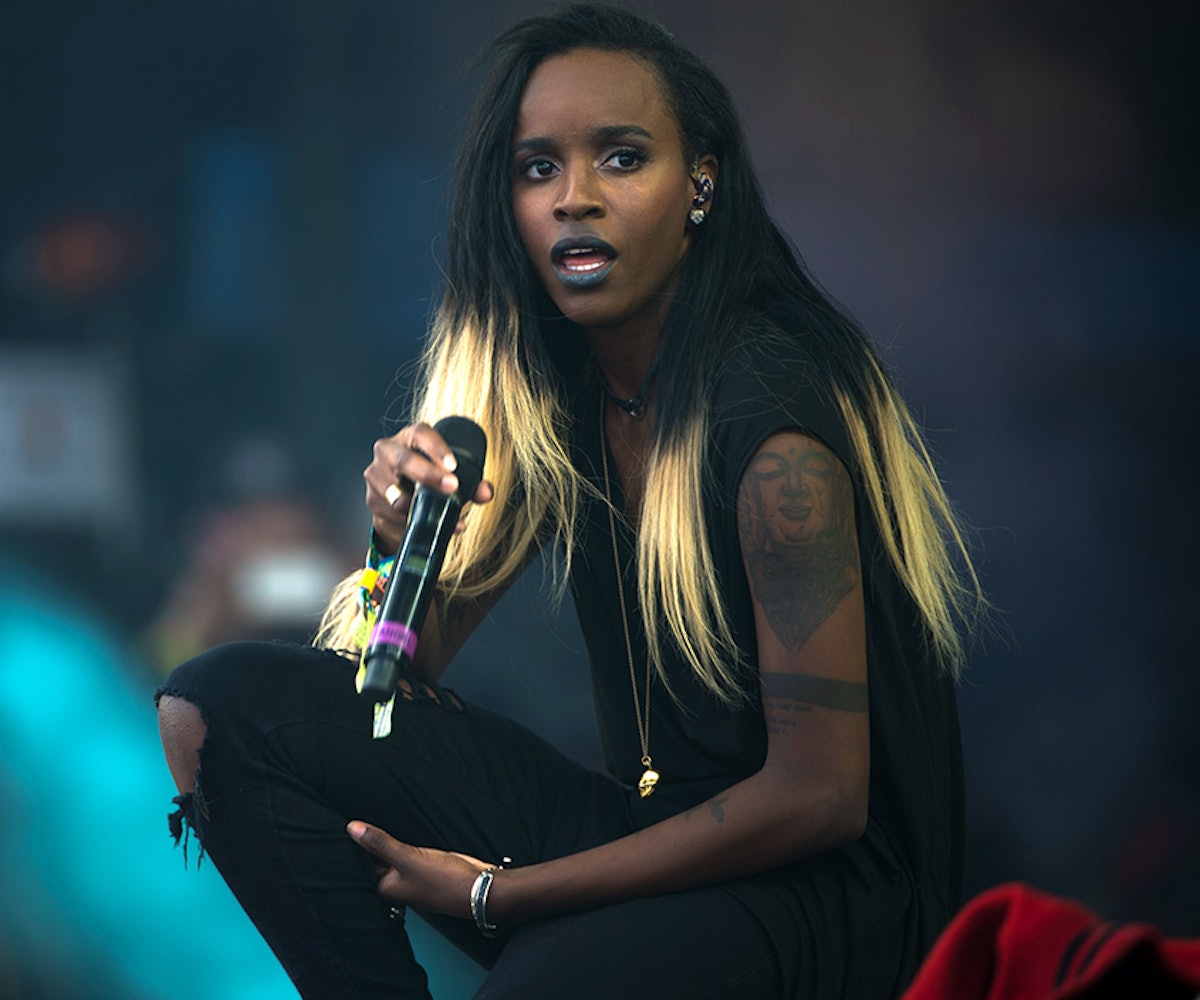 It's a huge day for LGBTQ people: Marriage is now legal in all 50 states, and it's Pride month. Which translates to one thing for us: parties. Lots and lots of parties. No party is complete without some amazing music, so to get the party started, so to speak, we rounded up our 10 favorite queer women who are currently rocking our worlds (and our playlists). Click through to the openly queer musical babes who we're listening to and obsessing over.

This band of sisters from Atlanta, Georgia, makes haunting, moodie indie rock. One of the von Grey sisters is a lesbian, and the themes of their music often touches on the complexity of queer relationships. If you like emotionally wrought lyrics sung by dark-haired babes with cool piercings, definitely check von Grey out.

Forthright, abrupt, and intelligent, Raee'n Roes Wilson—better known as Angel Haze—blasted onto the scene in 2012 with

. It was a loud and abrasive EP filled with power anthems about self-love and going out and getting what you want. Since then, they've become more vocal about their sexual identity (pansexual) and the politics surrounding it. Their freestyle over Macklemore's "Same Love" did the song's message more justice than the original—probably because it came from a queer artist rather than a cisgendered heterosexual man. Anyway, Haze has continued to be a positive force in the queer musician oeuvre and will continue to when that next album drops.

Hurray For the Riff Raff

Alynda Lee, the singing/songwriting/banjo-playing angel who fronts indie-folk band Hurray For The Riff Raff, is definitely an artist to watch. There's a radical feminist twist on every attention-grabbing tune she sings, and her deep, bluesy voice is the kind we could listen to all day.

Elizabeth Lowell Boland's approaches pop music with a no-frills kind of honesty. A former stripper, Lowell's debut album We Loved Her Dearly was riddled with songs empowering sex work and human sexuality. Speaking with T Magazine last year, Lowell said, "I like to think my music tastefully blends politics and pop." Indeed, songs like "LGBT" don't shy away from the bold statements. "L-G-B-T / L-O-V-E / Don't hate our love." Political messages we can twirl to? Sign us up.

The force that is Azealia Banks is something to be reckoned with. Right off the bat with "212," Banks shook the mediascape with her filthy tongue, political awareness, and penchant to speak her mind—even if it wasn't the most P.C. Her openness about her bisexuality ushered in the new wave of queer rap and hip-hop that flooded 2012. Thanks to her, downtown greats like Le1f and Cakes Da Killa got the recognition they deserved. Banks' sonic history is riddled with management troubles, Twitter beefs, and broken promises, but when she Beyoncé'd her debut album Broke With Expensive Taste in 2014, she reminded her fans why they fell in love with her in the first place.

Canadian band Austra is pretty much made up of queer individuals, but don't call it a "gay band." Katie Stelmanis told After Ellen in 2011, "There are a lot of stereotypes of what a gay band—particularly lesbian-identified band—should sound like, and we don’t really fit in with those stereotypes, which is confusing." Indeed, Austra's highly emotive, often operatic sounds do not fall under the stereotype. It's this very fact that makes it one of the more interesting queer groups to date. Call it a new normal, call it whatever, Austra is challenging what it means to be a queer artist and we are so here for that.

Miley Cyrus is an inspiration through and through. Her antics are out there, but she has proven herself to be more than a wild child, ex-Disney star. These revelations are only a year or so old, but her activism for LGBTQ issues has become one of her most redeeming qualities. Just this year, Cyrus has come out as genderqueer and become one of the bigger names raising awareness for the often misunderstood but forever-growing, marginalized groups of individuals. From letting a homeless youth make a speech in her stead at the 2014 MTV VMAs to creating the non-profit Happy Hippie Foundation that seeks to tackle "injustice facing homeless youth, LGBTQ youth, and other vulnerable populations," Cyrus has grown to become both an advocate and valuable role model.

Ryn Weaver made our hearts explode with joy last year with her viral sensation of a hit, "Octa-Hate," and captured our love forever a few weeks ago when she came out with a tear-jerkingly beautiful rendition of "Pierre." Now, on the heels of her first album release, the 22-year-old is letting us into her world: "Everyone’s on the spectrum on one level or another," Weaver told The Cut. "I’m definitely queer—I’m not a purely straight woman and I don’t believe in limiting myself when I don’t want to. It’s up to us to embrace our freedom or be stifled by constructs that were created centuries ago." Read our latest interview with her, and just try not to fall head over heels.

Brooklyn-based musician Mia Wilson fronts The Bright Smoke, a moodily ambient indie band that makes music to dance to with the lights turned down way, way low. Her sultry vocals are timeless, and juxtaposed over the electronic vibes of the band's new album, Terrible Towns, listening to The Bright Smoke is a totally unique experience.

If you're looking for just a really solid band fronted by an adorable queer, Mount Sharp—and Sarah Wood—is for you. This is catchy guitar indie-pop rock that's danceable and super-fun to see live, and as such, is a permanent part of our soundtrack for the summer. Play it on the way to the beach with all your friends or alone in your room while you get dressed. Either way, it'll make you feel happy to be alive.

NEXT UP
Entertainment
SZA May Finally Be Returning With New Music
Fashion
Take Halloween Inspiration From 2022's Top Music Videos
Entertainment
Relive ‘00s New York With Yeah Yeah Yeahs, The Strokes In ‘Meet Me In The Bathroom’ Trailer
Entertainment
They Didn’t Act. They Didn’t Sing. Then TikTok Changed Everything.