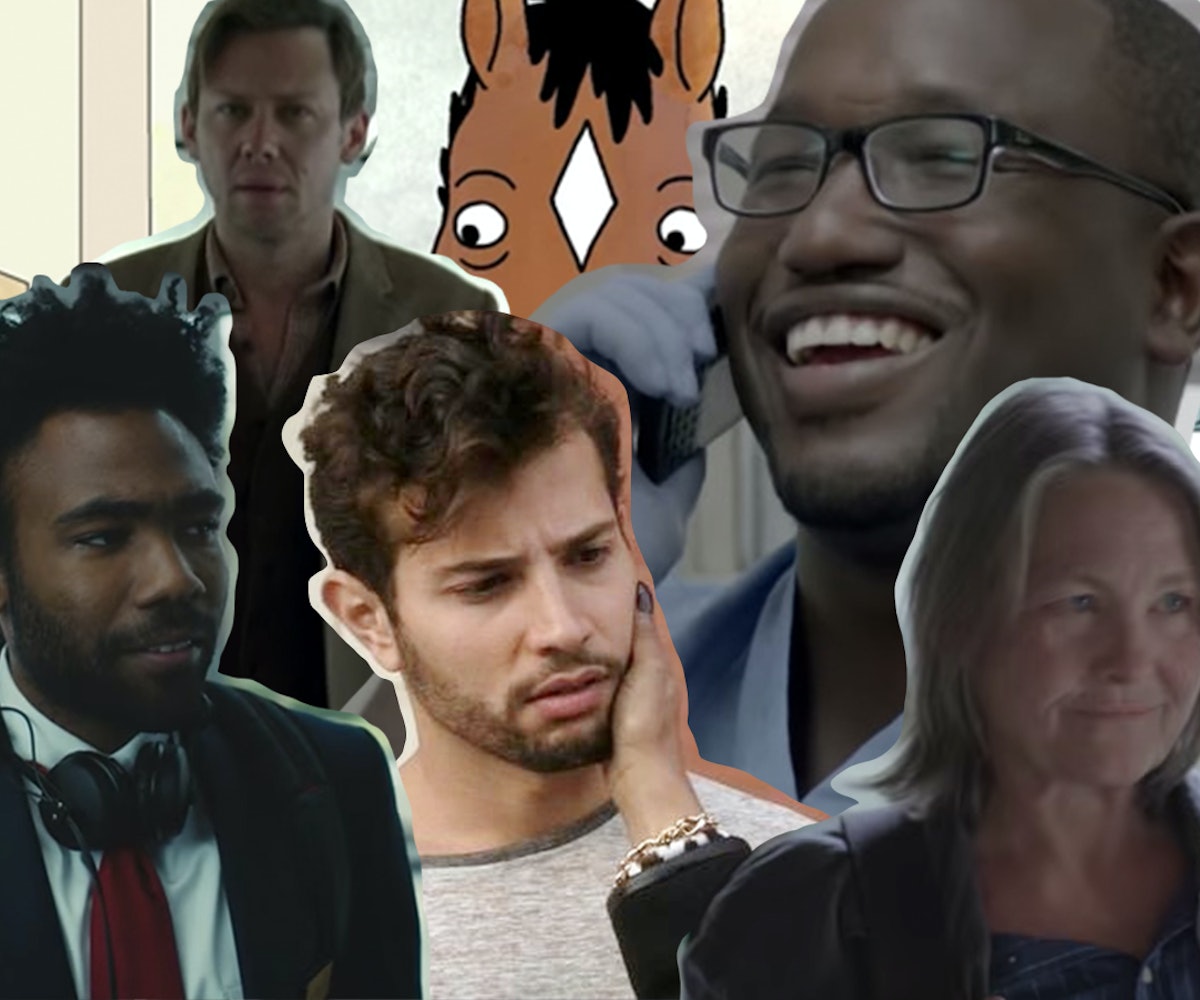 There's definitely a case for using culture as an escape, binge-watching hours of television in the hopes of leaving the seemingly never-ending nightmares of reality behind. And that's all well and good because we could all use a little fantasy in our lives, but sometimes reality intrudes while we're mainlining Netflix, and it does so in the form of fictional SOs who are all too real. Rude.

Well, okay, not that rude. In fact, it can sometimes be heartening to find relatable relationships on our favorite TV shows, so that we know that our own love story highs and lows aren't anomalies and specific to the weird exigencies of our own love lives. And it's always refreshing to actually find recognizable people on our TVs, rather than just boring archetypes that have no bearing on reality.

And while realistic doesn't mean perfect—the following television SOs aren't ideal partners, necessarily—that's actually okay; it just means they're human, after all. (Or, in one case, human-esque.) Here, then, are the TV boyfriends and girlfriends (and everything in between) with whom we identify as being the most realistic versions of our loved ones, flaws and all. (Oh, and in the interest of not just making this list another place for me to wax endlessly upon the relative merits of My So-Called Life's Jordan Catalano, every character here is from a TV show that's still airing.

What is not recognizable about Earn? From the moment in the pilot when it becomes clear that he can't say "I love you" to Van, the mother of his child (admittedly, theirs is a complicated relationship, but still) to the phone call he makes asking her to bail him out of jail (and admitting he doesn't have his share of the rent money), Earn reveals himself to be a very specific kind of SO; you know, the kind who is always fucking up and won't fully let you in because he's scared of what that will mean. Why do women stay with guys like this? Well, because, as in Earn's case, they're charming and smart and they're so close to being a good relationship fit that women can't help but refuse to give up on them. "Maybe," we tell ourselves. "Maybe if he just did this one thing, it would all be different." The problem is, guys like Earn rarely do "that one thing," and so your relationship stays in a perpetual limbo, but, damn, frustrating as it is, that limbo can sometimes be a lot of fun too.

Okay, so, sure, BoJack is a horse, but for anyone who's ever dated someone suffering from chronic depression (and too much time and money on their hands), BoJack is a very realistic SO. He also falls under the category of "guy you wish would just be a little different because then he'd be almost perfect," which is a super well-trod category among people I know. Ultimately, if you find yourself with a boyfriend who seems perpetually trapped in his memories of the good ol' days (particularly when those memories revolve around a '90s-era sitcom), run, don't walk away. Yeah, he's got a nice house, but, no, that's not worth it. Because these types of guys also tend to frequently have some freeloading friend staying indefinitely on their couch. Nobody needs that.

I think just about everyone's dated a Dill. He's that guy who's older and more successful and introduces you to all his friends almost immediately and the sex is great and everything seems just right until one day it's not, and all of a sudden, the fire in his eyes is out and he tells you that he really wants to find someone special with whom to spend his life. And since he's already met you, and he's not talking about you, that person is clearly... not you. Ouch.

I think just about everyone's dated one of their college professors. No, I kid! That's not why Leslie, who is in a relationship with Ali Pfefferman is so real. Rather, Leslie—who is decades older than Ali and starts off as more of a mentor—is recognizable because of the way she takes pleasure in doing real-time analysis of all of Ali's behaviors in this totally condescending, "I'm older and wise than you, so I know what you're doing and why you're doing it before you do" manner that is super annoying and super common, particularly in May-December romances. Leslie's also politically principled to a commendable but super-fatiguing degree. Ugh. Let's just say it didn't make me sad when she fell into a hole that one episode. It maybe even made me laugh.

Relatable in that super-sad way of "oh, yeah, here's how insecure dudes behave when threatened by their partner's career success," Michael has a tumultuous relationship with Jamal that ends when Michael cheats by sleeping with a sleazy photographer. Unfortunately, this kind of thing happens all the time because lots of men just can't handle being in a relationship with someone who is more successful than they are. It's a shame, really.

Hmmm... this is maybe the most realistic and the most horrific SO on this list because he is the type of guy who absolutely idolizes a partner, even without knowing them that well, rather choosing to project love upon someone instead of actually engaging with them on a meaningful level. The fact that William's object of affection is a cyborg—a beautiful blonde one, at that—is not at all surprising. Guys like William are all about the surface anyway. Terrible as this all is, though, the really dark part is what happens when the Williams of the world are rejected by their loves; namely, they spend a lifetime seeking revenge upon these women, punishing them for the crime of not loving them the way in which these men demand.

Are you a millennial who has sex, ever? Then you know (or are!) a Lincoln. Up for just about anything (especially if it involves smoking weed), Lincoln is a successful guy (he has a thriving dental practice!), who isn't hyper-ambitious. Instead, he just likes to take things easy, not putting too many demands on those around him, even his partners. Just be careful, though: If you're in a casual relationship with a guy like this, make sure you're on the same page about how open you want it to be, or there might come a day when he's not there for you anymore, having sought something more exclusive and committed

Eve, How to Get Away with Murder

There might not actually be that many people in the world who are like HtGAwM's Annalise Keating (she's a little too manipulative and murderous to be more than just a trope), but Annalise's ex-girlfriend Eve is common enough. She's just the typical, run-of-the-mill scorned ex who spends the rest of her life pining after her grad school flame until that one magical day when they can finally reconnect. Okay, put that way, it doesn't exactly sound realistic, but actually, there are too many people to count who are super hung up on past loves, willing to drop everything just to have another chance.

Although set in a world I don't know too much about (namely, London), Chewing Gum gives all audiences a real gift in the way it portrays love and, more importantly, lust. Tracey is a young woman who was raised in an ultra-religious household and is still a virgin in her early 20s. While that may not be ultra-relatable to everyone, here's what is: Tracey is, like, super horny all the time. Which, finally! Finally, there is a young woman on TV who just wants sex. All kinds of sex. And Tracey says things like, "I throb so hard it’s like my vagina’s got epilepsy." Preach.

Jimmy and Gretchen, You're the Worst

Even though these antiheroes are two different people, they are also one in the sense that they are both the same kind of vaguely sociopathic narcissist that so many of us have encountered after swiping right. Jimmy and Gretchen are ultimately intolerable because of how anxiety-prone, self-motivated, and emotionally oblivious they are to most people, but sometimes—as in this show—these two people find each other and terrorize nobody but themselves with their atrocious, commitment-phobic behavior. It's poetic relationship justice at its finest.

"Homeless Heidi" is one of the many too real characters on High Maintenance, but she stands out for just how uncomfortable her realness manifests on-screen. Stop me if this sounds familiar: Heidi is that person who never has cash when it's time to pay for, like, anything, always loses her keys so she has to crash at your place, wears the same three outfits over and over again, is THE MOST FUN ever at first, so that she sucks you in, and then just kind of... sucks. You've probably already stopped me because you know this person. Everyone does. She's Heidi, and she's everywhere.

While not one of the quartet of main characters on this show, Luisa is ultimately the most real in that her intentions and behaviors are always internally consistent and she deals with the crappy hand she's been dealt in a way that is recognizably moral and sympathetic, without allowing herself to become a martyr. That Luisa is married to a man who will never love her as much as he loves his ex-wife is a tragic reality, but the character's determination to make the best out of her life is a testament to her strength and willpower.

Ah, Issa is so relatable because she makes you think that she's just an awesome person to date and not inherently threatening because she seems so, well, awesome. But what Issa makes clear (and what we should honestly already know because we're humans who live in the world) is that even the most awesome among us fuck up sometimes, as Issa does when she cheats on her boyfriend during a moment of crisis. What makes Issa so relatable is that this action doesn't make her any less of an awesome person, but rather demonstrates her—and all of our—capacity to make mistakes and then have to figure out how to carry on, imperfect though we may be.