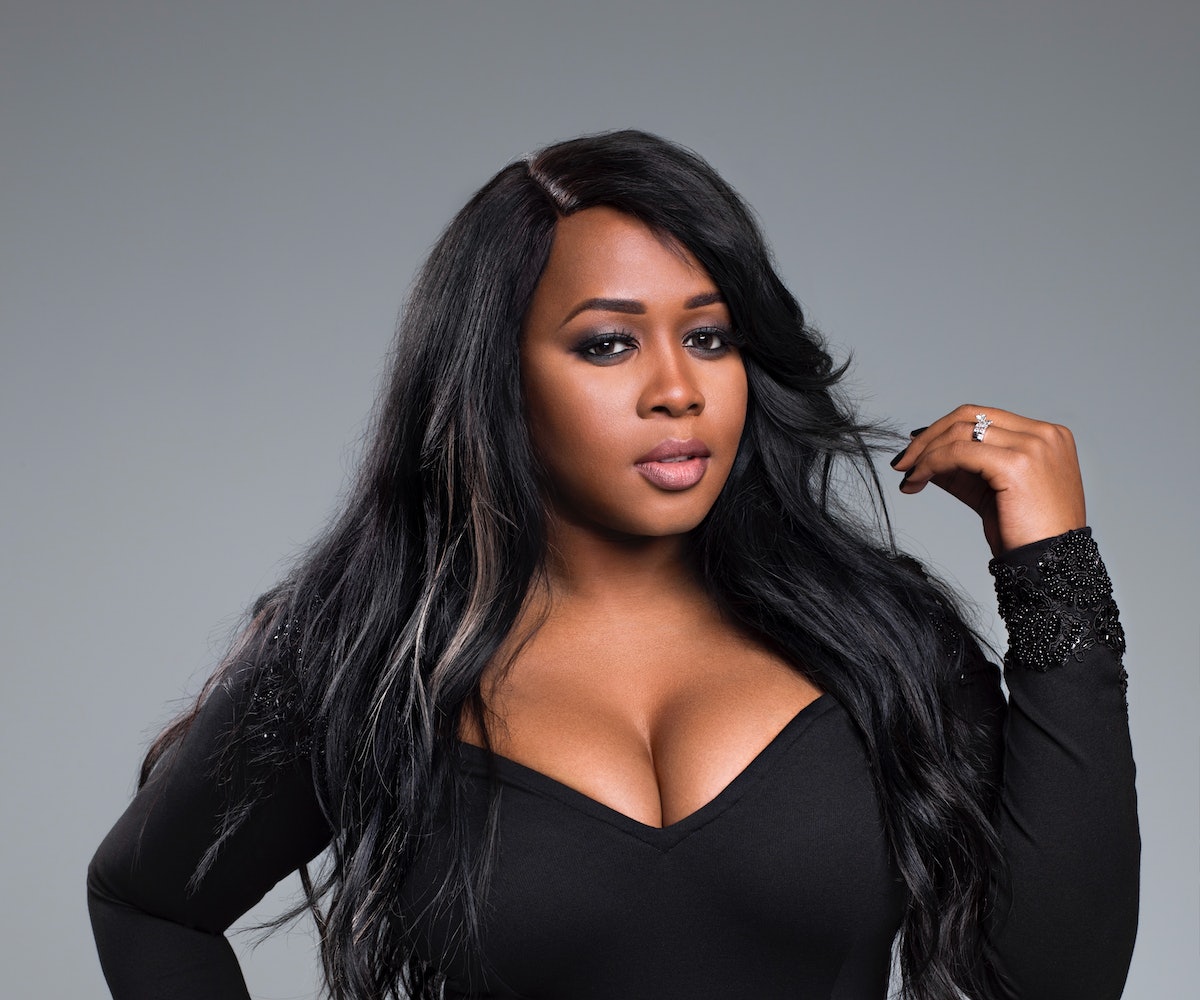 Ten years after her hit track off of her debut album became a verifiable club anthem, Remy Ma is as conceited as ever. Well, confident might be a better descriptor. When we meet up with the rapper, she’s wearing thigh-high lace-up boots over a pair of generously ripped jeans that match her loosely curled, long, blue hair. To steal a line from the rapper: her swag, her flow, she stole it back.

The 36-year-old came back strong in 2016 when “All The Way Up”—a track she recorded the day after her wedding and in lieu of her Hawaii honeymoon—hit the radios, the clubs, and the house parties this summer. And now, she has an album coming out with Fat Joe (Plata O Plomo, which translates loosely to money or bullets), with whom she made up after a falling out; a role on Love and Hip-Hop New York with her husband, rapper Papoose; and a fresh start. She has a lot to boast about now that she’s making headlines again—this time, for things of which she’s proud.

Six years of Ma's decade-long hiatus were eaten up in prison—not jail, an important distinction. “Prison and jail are very different. I was in jail for two months, I was in prison for years. Prison's far away. Every piece of your identity is taken away. You have to wear your hair a certain way. Everyone's dressed the same. It's just so much different from jail.”

Ma was found guilty of two charges of assault after shooting a friend who allegedly stole $3,000 from her. She was released in 2014. One of the biggest misconceptions people have about prison and the artists that land there is that they have plenty of free time to write new music. That’s not the case, says Ma. She lists studying for her college courses, writing papers, and working two jobs (one morning, one night) as things that kept her busy. She wrote some music while she was locked up, but they’re not club tracks by any means. She plans on putting some of them on her upcoming solo album… maybe. “I don’t know if people are ready for that part of me yet,” she reflects. "You're just not in a good space. You're not happy, you're not partying, so a lot of your music and a lot of the things I was writing [about] were reflective of my environment… I was missing my husband. I was missing my son, my family, my life. I was stressed out, depressed… your inspiration and your drive are just killed, you don't have it in you."

Six years is a long time to be locked up in an institution meant to break you down, but Ma tells us that she remains unaltered. “Me, personally, I don’t think it changed me at all,” she says. “If it did, it’s in the same way that you would have changed with time.” What has changed, though, is the music scene. “It’s weird because before rappers only worked with rappers, now any genre is game,” she says. “I’m not mad about it, I think the way hip-hop has evolved into so many different things and has incorporated different genres into their music is really dope.”

She’s adjusting pretty seamlessly, too. She teamed up with JoJo for the pop banger “FAB” (fake ass bitches) and says she has a handful of other collabs up her sleeve. She also hopes to team up with other women rappers—the few that are out there. When asked why she thinks there are so few women MCs compared to men, she’s pretty blunt about it:

Bitches is haters. I should have said females. I'm not talking about females, I'm talking about bitches right now. A lot of time, women don't like to see other women succeed. They don't like to feel like they're in competition… I was watching the debate the other day, and it seemed like most people who were hating on Hillary were women. Women be like: We get paid less, we have children, but whenever there's an opportunity for a woman to succeed, it's other women that help bring her down. That bothers me.

Ma stresses that it’s important to remember that someone else’s achievements don’t take away from your own:

The guys in this industry, they get on these songs—four, five of them all together—and they make these great records. But with the women, they try to pit us against each other. We, women, allow it to happen. They're too busy worrying about their spot being taken as opposed to not realizing that there's more than one spot to have.

She says that she tries to give young up-and-comers advice (she lists Young M.A. as one) as much as she can since she never had anybody doling it out for her. Oh, also, don’t refer to her or anyone else as a female rapper. She hates the term.

Loud and clear. As for when we can expect that joint album, Ma says it’s coming out sometime this month. “I say November, Joe might tell you something else.” We’re betting on November. What Ma says, ultimately goes.