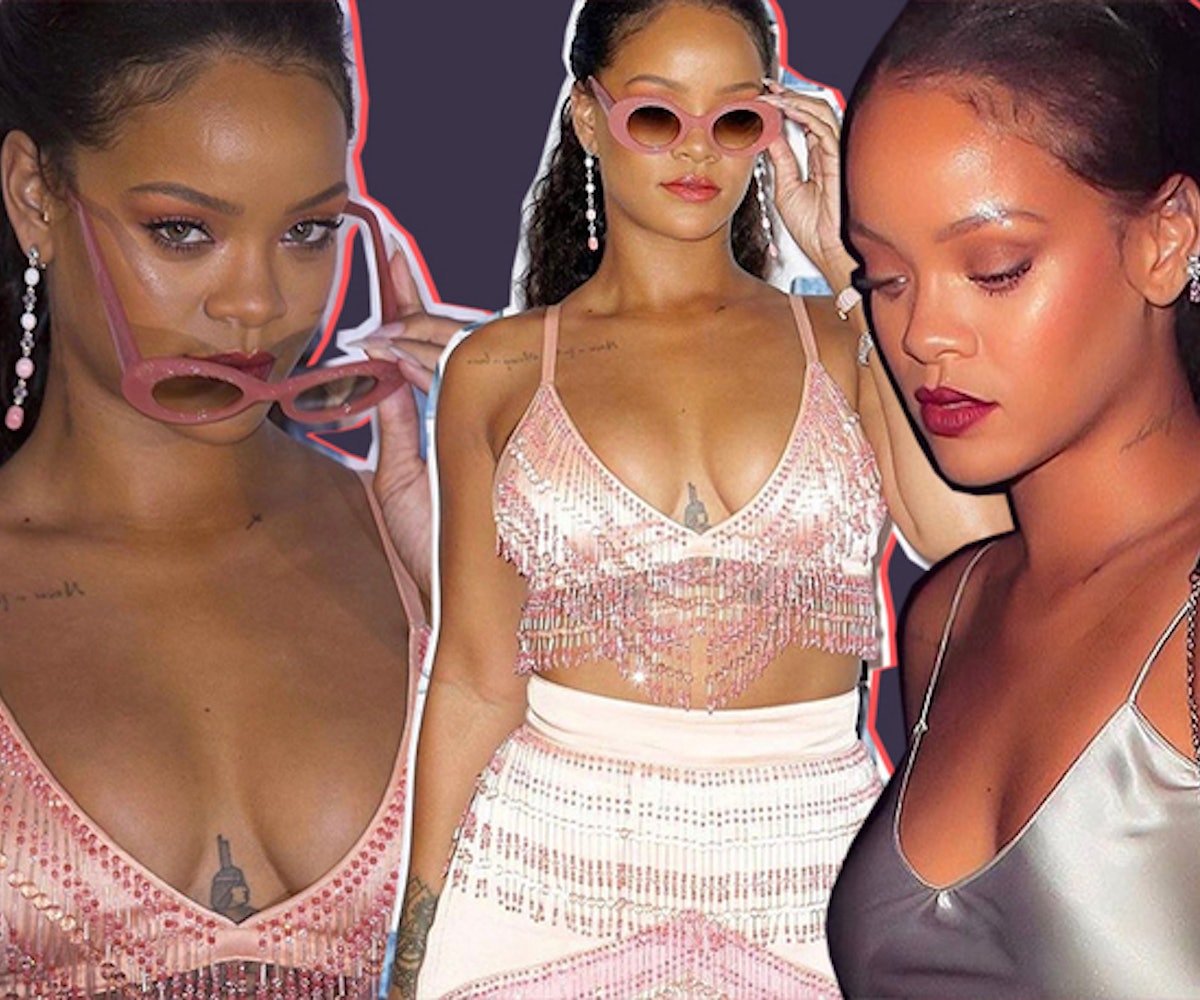 It pains us to say, but Rihanna’s character Bubble isn’t the best part of Valerian and the City of a Thousand Planets. That accolade goes to the Pearl people and Luc Besson’s wild imagination. She’s good, and we wouldn’t mind if her dancing scene were 15 to 20 minutes longer, but what you really should be paying attention to is what the singer’s been doing and wearing on the press tour for the film, because she’s been owning each and every red carpet she walks down.

First, last week, she showed up in a bubblegum pink, off-the-shoulder Giambattista Valli Couture baby doll gown which required a gaggle of helpers to aid with its train. Monday, she casually rolled up to the London premiere in a ravishing red empire-waisted gown also by Giambattista Valli. She accessorized with a deep red lip, matching red earrings, and a whole lot of cleavage.

But with all things involving the bad gal, she also wins us over in ways that don’t involve what she’s wearing. Like when she Instagram-storied herself wearing 3-D glasses… with the flash on. Because fuck a no cell phone theater policy. Or, the other time this week, when she posted her beauty look from London and simply tagged her cheek as Fenty Beauty with no other details. This leads us to assume a blush or a highlighter or a bronzer or maybe a foundation will be part of her first beauty collection, but we're just going to have to wait until fall to find out.

Tuesday, she shimmied her way to another premiere in Paris while wearing an island-inspired, tassled pink Prada number that just begged to be Boomeranged. And, oh, did she ever. Later, she posted a detailed shot of her accessories with the caption “tap 4 deetz af” without actually tagging any deets! A troll that probably wasn’t even meant to be a troll!

Yesterday, the artist capped off an already iconic week by meeting with French First Lady Brigitte Macron and President Emmanuel Macron in Paris to discuss her global initiative for education. In her humble brag-y way, she posted a red carpet shot of herself peeking over her sunglasses with the caption “when you see the future of education getting bright.” All while looking like a vision with a mission who isn’t even going to bother with your pregnancy rumors.

This week hasn’t been the best in a general sense. But let Rihanna not giving a damn be an inspiration to anyone who’s been giving way too many lately. Let’s all go into the weekend acting as carefree as Rih.

NEXT UP
Entertainment
Who Will Rihanna Bring To The Super Bowl?
Entertainment
Soccer Mommy, Wet Leg, & 48 More Artists Made An Album For Abortion Rights
Entertainment
Tove Lo Announces 2023 Dirt Femme Tour
Entertainment
Florence Pugh Is A Gothic Nurse In Eerie 'The Wonder' Trailer