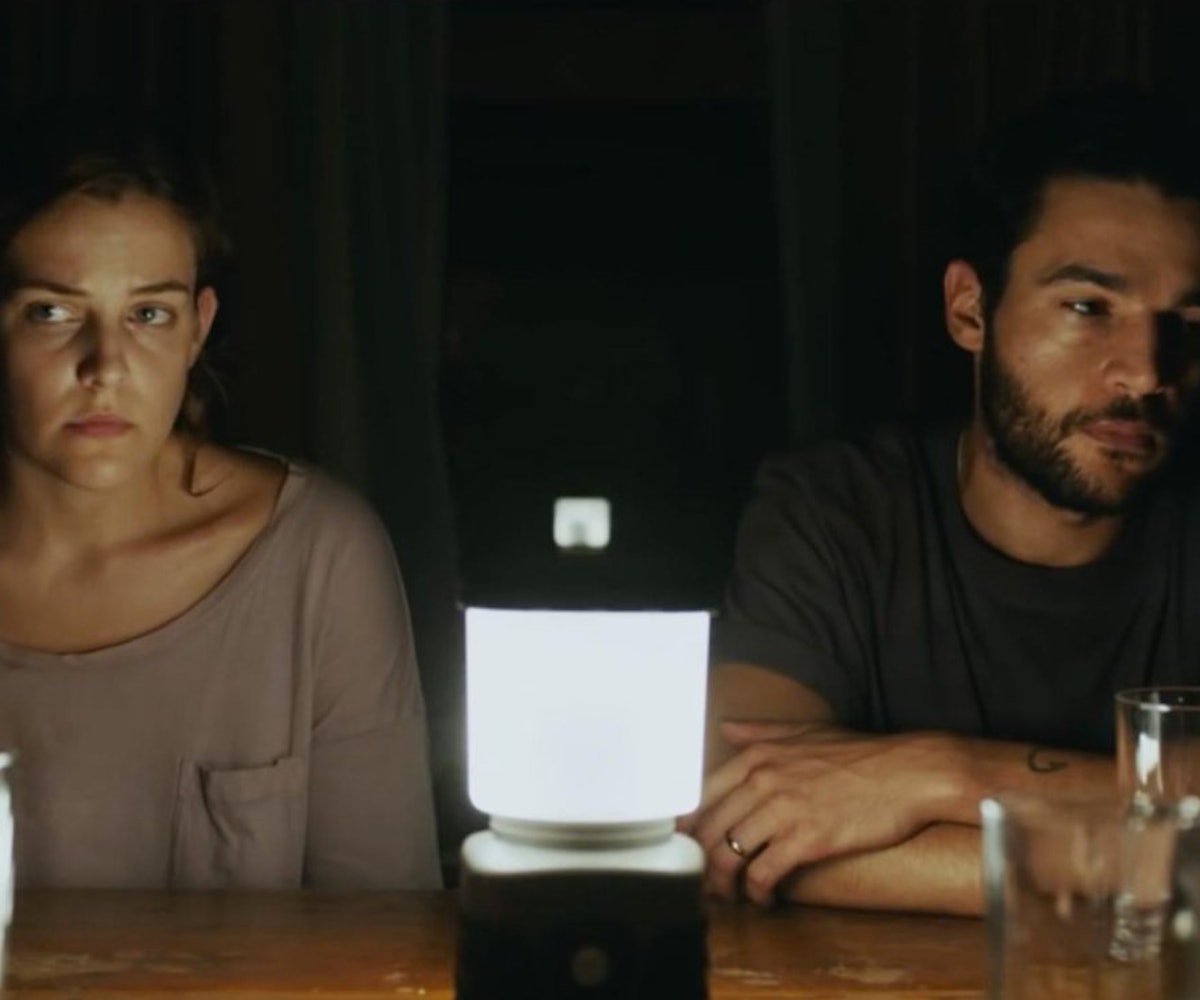 It Comes at Night, the new film from white-hot production company A24 (the people behind Moonlight), is being marketed as a horror movie. But director Trey Edward Shults, following up his critically acclaimed debut Krisha, is interested in far more than scaring the hell out of his audience (although he does that, too). The movie centers on a man named Will (Joel Edgerton), his wife, (Carmen Ejogo) and their teenage son (Kelvin Harrison Jr.) who have isolated themselves in a fortified house in the woods, in the hopes of surviving a mysterious plague that seems to have wiped out much of civilization. The front door must always stay locked, and the characters spend much of their time outdoors wearing gas masks.

But instead of a horde of infected people storming the cabin in search of blood and brains, another couple, played Christopher Abbott and Riley Keough, arrive with their young son in search of food and water. Against his better judgment, a skeptical Will lets them stay, and it’s that dynamic, where mistrust and paranoia overtake normal human interactions, that Shults uses to create an unbearable sense dread. We spoke to Keough and Abbott earlier this week about their characters' origins, what makes A24 so special, and the streaming era.

Did this script have elements to it that you haven’t seen in scripts before?

Christopher Abbott: Yeah, I read the script having already seen Krisha, so my instincts were to put Trey’s style into it while reading it. Trey has a nice way of having the right amount of sparseness in the script so that there’s a purposeful amount of room that you, as the actor, go, "Oh, I can play here." There’s no unnecessary exposition, or if there is, it’s only because you need it to know it, and then you probably get rid of it when you actually shoot it. It’s very elegant in that way.

Riley Keough: Definitely. The authenticity in the relationships was really real and developed to me. There was real emotion in all of these people. Also, I didn’t really know what was going to happen. I guess you never really know, but I didn’t know where it was going and if it was going to be a scary movie, or if everything’s going to be fine, and I really like when that happens. Also, it made me cry.

Is it rare for you to tear up when reading a script?

Riley, I saw you on Jimmy Fallon yesterday, and you called the film topical before Jimmy cut you off. Can you elaborate?

RK: Basically, it’s a movie about what happens when people make decisions based off of fear.

Does shooting in one location change the dynamics of the shoot?

CA: I think it’s nicer. It’s more relaxing. There’s just less stress of moving around and you kind of just get to know a place. You get familiar with the house. Everything moves faster.  The whole crew gets accustomed to it, so it becomes the place we shoot in and the place we hang out in.

Did you have to fill in your characters’ backgrounds? One critic imagined you guys were a hip Brooklyn, New York, couple before the plague hits.

RK: I think that’s what Trey did kind of allude to. I don’t know if we’re necessarily meant to be hipsters, but more of a hip, young city couple.

CA: Where someone comes from, I think, is really important, where they were born, where they grew up. Once you kind of know that, you can suss the rest out.

This is being called a horror film. Do you guys see it as that? I saw it more as a psychological thriller.

RK: Yeah, that’s kind of what we’ve been calling it.

Do you think audiences might be misled going into it?

CA: In a nice way, I think, it’ll subvert expectations. If one is looking for a horror film going into it, I would think that they wouldn’t be disappointed with the outcome because there’s still scary elements to it. But, in my opinion, it’s much scarier than what a traditional horror film would bring. The scariness of one’s own brain and one’s own psyche and the world that you can create for yourself is probably much scarier than the world that’s actually on the outside.

A24 is getting a lot of attention for how they’re disrupting the movie industry. What’s it like working with them?

RK: I love them so much. I’ve done three movies with them now, and they’re so supportive of their directors and so cool.

CA: When I was a kid, I used to get excited about title cards before a movie. And I remember how excited I would get for New Line Cinema and Touchstone. You get that feeling. I didn’t have that feeling for a while, and then, all of a sudden, A24 started making movies, and I get excited when I see the title card now because I know something interesting is going to be coming. I’m not saying that because we’re in an A24 movie, I mean that sincerely.

RK: I don’t have that with anyone really except A24.

It Comes at Night felt like is a festival film. Do you think it would have benefitted the film to premiere at a big festival?

RK: That’s interesting, and I don’t know who makes that decision. I have been in very few films that didn’t do festivals. It’s kind of cool.

CA: The other thing is that A24 produced this film, so they were on board from the beginning, and a lot of times movies are at festivals to get bought, but we didn’t need that.

RK: That’s right. I forgot about that.

What are your thoughts on the streaming boom?

CA: I’m somewhat of a traditionalist. I like going to see movies in the theater. I feel like online, sometimes they can get kind of washed away into the abyss, and I like to watch movies on a big screen. I can’t deny that some of the streaming services have helped certain movies get made that maybe wouldn’t have gotten made. There are things I like about it, and there are definitely things I don’t.

Riley, you made a small movie called Lovesong, which most people are discovering on Netflix. That’s gotta be a good thing.

RK: Yeah, that’s a great example, because that did nothing in the theaters and everyone’s watching it on Netflix, so that’s cool. At the same time, I think people sort of always want things to be a tradition. But it is great for that kind of film and also for people who don’t necessarily have access to go to certain theaters. I’m sort of in the same situation, where the concept of it makes me want to be like, "No," but, in reality, it’s probably really helpful for filmmakers.