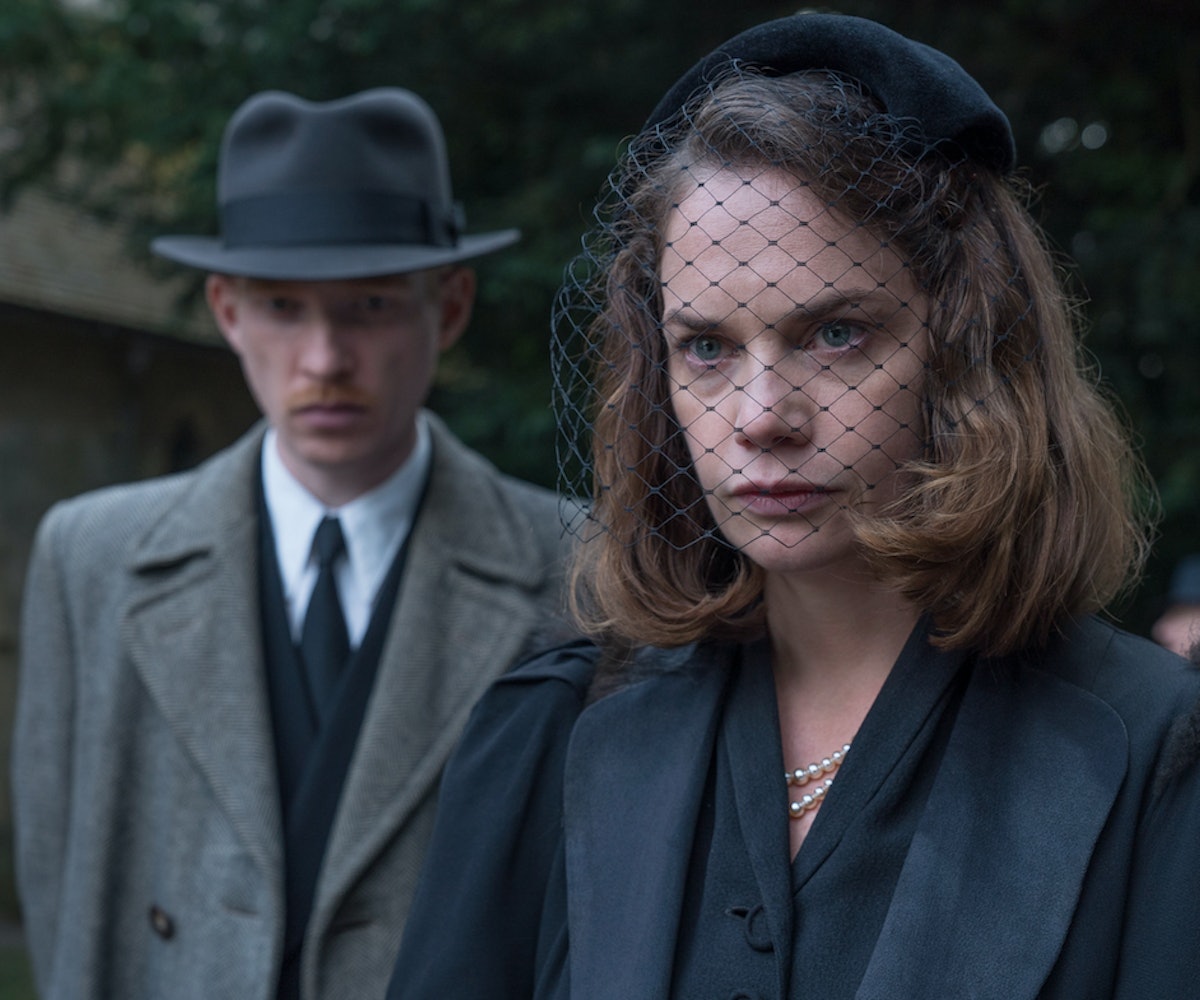 RUTH WILSON IN 'THE LITTLE STRANGER'

"I'm drawn to stuff I don't understand," Ruth Wilson tells me, explaining the initial appeal of her new film The Little Stranger. And if intrigue is what compels Wilson to a project, then it's no surprise that The Little Stranger was a perfect match. Based on Sarah Waters' novel of the same name, The Little Stranger is one of the more deliciously unsettling films I've seen in some time; its final scenes leaving an unshakeable impression, having upended my previously held assumptions, shrouding an already mysterious narrative in even more doubt and heartache.

Perhaps this is to be expected from a horror film, particularly one filled with supernatural elements—including the troubling possible presence of a long-dead child—and set in the kind of decadent, dilapidated British manor house that vibrates with the energy of generations of prior inhabitants. But the mystery of The Little Stranger is deeper than that of an ordinary ghost story, and speaks to larger social and cultural changes happening in the film, which is set in post-World War II England, a time of austerity and upheaval, when the country's strictly maintained social order was under threat, and people struggled to maintain the power they had and fought for, the power they felt like they deserved to have, no matter the costs.

Wilson plays Caroline Ayres, the unmarried daughter of an aristocratic family who has fallen on hard times. Where once the Ayres family had hosted elaborate parties at their estate, Hundreds Hall, now their home is falling apart, their land sold off, parcel by parcel, to developers who plan to use it for low-income housing. Caroline is nothing if not dutiful though; she has returned home following a time of independence during the war, a period when she was able to work and live on her own, and not have to think about things like family and duty. But post-war, she must not only care for the estate, but also for her aging mother (Charlotte Rampling) and grievously war-injured brother, Roderick (Will Poulter).

A possible escape for Caroline appears to come in the form of Faraday (Domnhall Gleason), a country doctor from whose perspective the story is told, and whose mother was once a servant at Hundreds, and who now inserts himself into the lives of the Ayres family, out of a mixture of awe, respect, envy, contempt, and lust. But as Caroline steadfastly navigates through events that grow more and more peculiar, harder and harder to explain—a fire starts, bells start ringing, mysterious writing appears on the walls—it becomes clear that escape might not be possible, and that, indeed, there is never any escape from under the heavy wheels of a blighted history, one which has never shown much sympathy for women of any class.

Below, Wilson speaks about the ways in which the film is a commentary on a patriarchal society, why even privileged women are often doomed, and whether or not she believes in ghosts.

This is a narrative filled with ambiguities and untrustworthy perspectives, and I feel like that can be difficult to bring to the screen. It's hard always to know what Caroline is really thinking, whether or not she actually pursues things she wants or does them out of duty; like if she truly loves Faraday. What were some of the specific challenges you faced playing Caroline?

There weren't really answers to her intentions or to her reasons for being. I had to come up with those, and it's sort of complicated because I think, in a way, she didn't know, herself, quite what she wanted. It's through the journey of the film that she becomes stronger and clearer and knows what she doesn't want basically, by the end... But throughout it, she's just dealing with the practicalities of what's going on in the house and what's going on around her, and she's not really sure, because she's not in control. [In terms of] the relationship between [Faraday and Caroline]... you sort of want them to be together, but then you don't, so you're unnerved by it. We decided to play it lots of different ways. There were so many different sorts of versions that we played with because, essentially, she's all these things. And you can pick out elements, and then it was down to Lenny [Abrahamson, the director] to shape that. It was quite an intriguing process because she's lots of different things, and it's never quite clear what her intention is, really.

And, really, Caroline is such a tragic figure, because she's a woman who has, in so many ways, every privilege that can be afforded to a woman of that time, but then also she's nothing; she has no real power on her own, separate from her house or from a man.

She has no options and no choices. To me, I think what's really interesting about it, and I spoke to Sarah Waters about women's choices during the war, because, like lots of women during the war, Caroline had lots more economic opportunities and lots more freedom; she was doing jobs men usually would have done, and she was part of a community that was not about class or status but only had one purpose, which was to fight this war. And I think Caroline really thrived in that environment, and then she was placed back post-war into this crumbling way of life, into these social stratas that she didn't really fit into and didn't want to fit into. And so she was sort of stuck... I feel like she's a woman trapped. And the house kind of chips away at her, at her confidence, at her energy and what she had to offer. She sees in Faraday a potential escape. It's not necessarily that she has to fall in love with this man, it's just that she sees a practical way of getting out of her situation.

Her relationship with Faraday is so interesting, because he feels, in many ways, inferior to her, because he's a striver and not to the manor born, as she literally is. But also, he feels superior to her because she's a woman. It's grotesque. And while his feelings are reflective of his time, it's not so far off from the way so many men feel today about women, that propriety...

[They feel] threatened by female independence, threatened by women who are not the norm. And that's how he felt about Caroline—threatened by her. And like he couldn't own her entirely.

And though the film documents a very specific, interesting time in British history, post-war, just as the empire completely crumbles apart, it feels also very predictive of what's going on in Britain and America now, as we experience these big shifts of our status in the world and figuring out how to take care of our citizens. As can be seen in the film, sometimes it's people who do have power and privilege who want to disrupt the status quo, like Caroline.

Our country is very defined by class, and always has been. And it's very particular. When you're inside it, it's hard to totally understand it, but the idea that the privileged, wealthy, those that are aristocrats—this is so general, but—in a way, they kind of can be more open to change. If you're from complete real privilege. If you're any step below, and you're climbing up the ladder, often there's more conflict among these people that want more, that want to establish themselves at the top of that ladder.

Of course, that's not always the case, but I think in this film, it's portrayed that way. Someone like Caroline is willing to progress. She's open to people of different classes, and she's opening the doors to that. Whereas Faraday is much more strict. He's a social climber, he wants to reach the top. And so people who get in the way of that, he's kind of going to kick them to the side. So it's interesting, people on those different stages of the ladder, how they interact with others.

In our country, the aristocracy is majorly in decline, since land isn't what's valued anymore; we have a lot of these crumbling houses, and that old empire that's fallen to its knees—it doesn't really exist anymore. But people are trying to hold onto it, gripping it with dear might. What I loved about this film, and the characters in this film, is that unlike other shows which we put out—those period dramas which America loves and which the world loves—they're about nostalgia, they're selling something that existed years ago, a kind of romanticized version of it. This is really about the decline of that. They're really eccentric, interesting, specific characters that feel very real to me, and sort of come across as what we actually have in the country, not the glamorized version of that aristocracy. You don't often see the aristocracy in real decline, and that's what this film does.

The decay is quite literally visualized, and it is really fascinating to see it depicted in such a comprehensive way. It is literal and then also figurative in the form of the supernatural elements. Which, do you believe in ghosts? Did that inform your portrayal of Caroline?

I do believe in ghosts. I believe in energy, and I think you can feel an energy in a room when people have lived there for years and years. A lot of why this film is interesting is how it straddles so many different genres—it's not just a ghost film, it's not just a supernatural film, it's really a drama about people. So, for me, it wasn't about the ghost story element, I wasn't having to play that. It was really just a normal, personal drama, how you'd feel about any other character.

Caroline is very practical, she's the last one thinking it's anything like a ghost, she thinks there's a practical scientific reason or that her family is just losing their minds, and she's watching it happen in front of her. So I don't think she believes in ghosts until quite late on into the film. She knows it's around, but I think she's in denial, just like, Get on, this is ridiculous. It's a very British way of dealing with things. But by the end, she thinks, No, it's something else. She's a believer by the end. [laughs] A Belieber by the end. She Beliebs.

[Laughs] Caroline, too, would have Beliebed.

The Little Stranger is in theatres now.