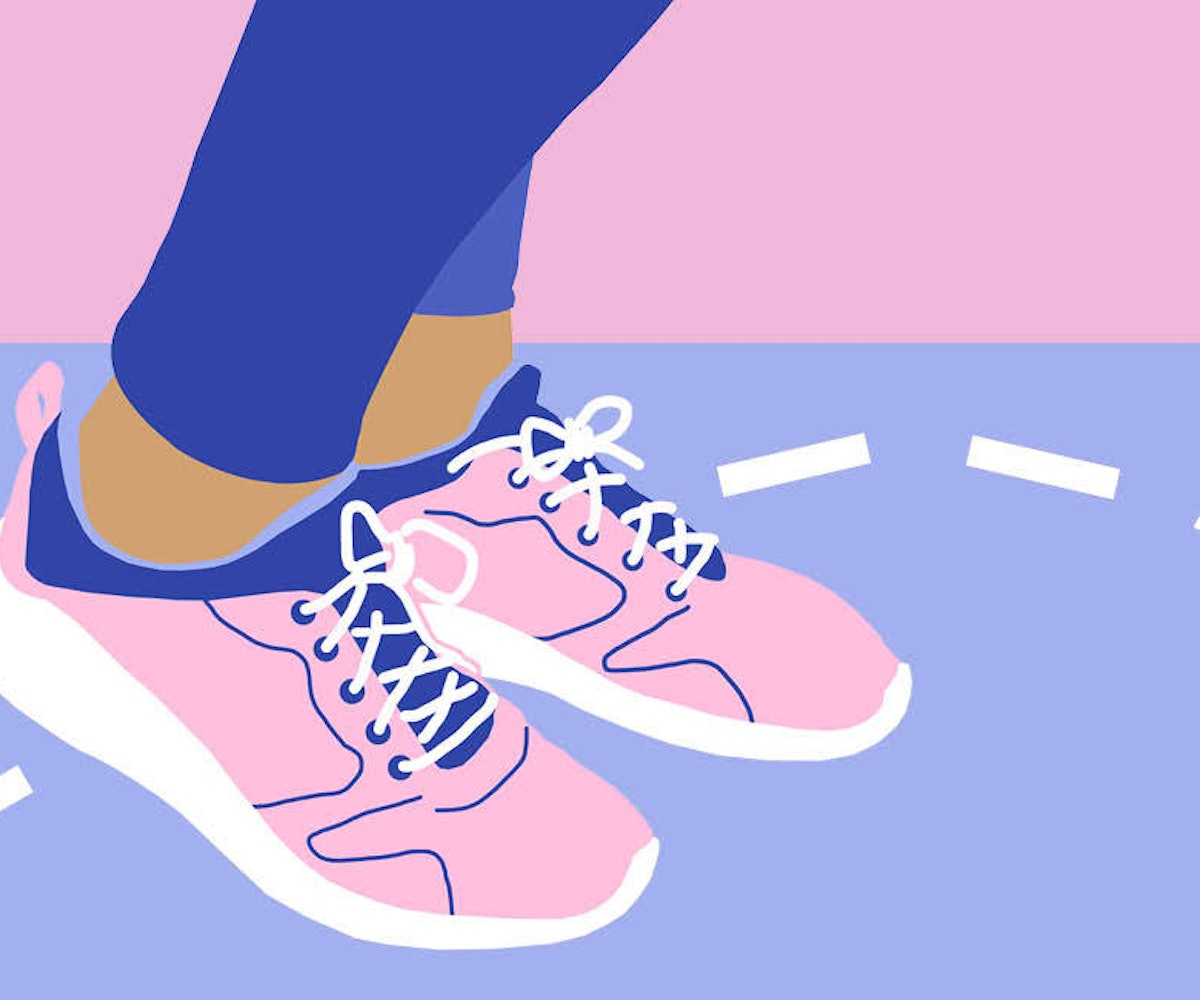 Running, riding, walking, or hiking solo shouldn’t be scary for women. But almost all of us who’ve spent time solo on the trail know that sometimes, it can feel a little creepy. But those fears shouldn’t keep you stuck on the treadmill. We deserve to be comfortable when we’re outside getting our sweat on. Tel Aviv-based Krav Maga expert and teacher Dan Gador has some amazing tips for women to help us stay safe—and empowered to work out anytime, anywhere.

Skip headphones. That’s Gador’s biggest tip, and the one he sees ignored most often. “People aren’t aware of their surroundings anymore,” he says. If you must run with tunes, he says, keep the volume low and run with only one earbud in. It’s not ideal, but it’s better than nothing! Pay attention to who and what is around you. If you feel like that sketchy-looking dude is following you, stop for a few seconds to “check your phone” and see if he runs past. If he does, head in another direction and carry on, says Gador. You could also pop into a coffee shop, library, McDonald's, whatever, and change your course. Don’t be afraid to be afraid!

Stay in the Light

Aim for areas that you know well, are well-lit at night, or that have plenty of open places you can duck into. If you’re solo on a trail, make sure you have a map of the area, and rather than exploring new trail systems solo, bring a friend or two the first time you go adventuring and learn a couple of routes. Running at night? Find a kid’s practice, like soccer or softball, where you can run with tons of people around.

Let people know where you’re going to be. There are apps like MapMyRun that allow live-tracking or share your location, via Find My Friends, with your partner, parent, or best friend so someone is always keeping an eye on you.

Always bring a (fully charged) phone, says Gador. Even if you think you're not going to use it or are afraid of being distracted by it, a method of communication is important to have on hand. And if you’re running early, at dusk, or in the dark, be bright and reflective with a headlamp, reflective stripes on your gear, and even a handheld flashlight. (Safety also involves not getting hit by cars.)

No one wants to think about it, but some forethought into what you would do if attacked can save your life, says Gador. The biggest mistake he sees women make is that they head out on a run carrying pepper spray, but have never practiced using it. “You need to know how to grab it from wherever you have it stashed,” he said, “And be able to quickly open it, point it in the right direction, turn off the safety, and use it.” Too often people think it’ll be simple… and end up spraying themselves instead of an attacker. (He also advises people not use a spray when the wind is coming toward them or when they're in a small, confined space, lest it's them who ends up with a faceful of pepper spray.)

Remember in Miss Congeniality when Sandra Bullock teaches everyone the S.I.N.G. acronym (solar plexus, instep, nose, and groin)? Well, turns out, that might not be the most efficient way to free yourself from an attacker, says Gador. The solar plexus is a tough spot to aim for and needs to be hit pretty freaking hard to do any damage. Stomping an instep only works well in spike heels. “Think about your foam running shoes. Stomp on a foot, and you’ll likely just make someone mad,” Gador says. Rather, he advocates for aiming for the groin (any type of hit), or the nose. If you go for the nose, use the heel of your hand and strike upward to do the most damage.

A hard slap done right can do more than just annoy someone. Slap as hard as you can, aiming for the ear. If you hit your attacker right in the ear, you can use your hand and create a suction effect that can puncture eardrums. At the least, it will throw off your attacker’s balance, says Gador, giving you time to sprint away to safety.