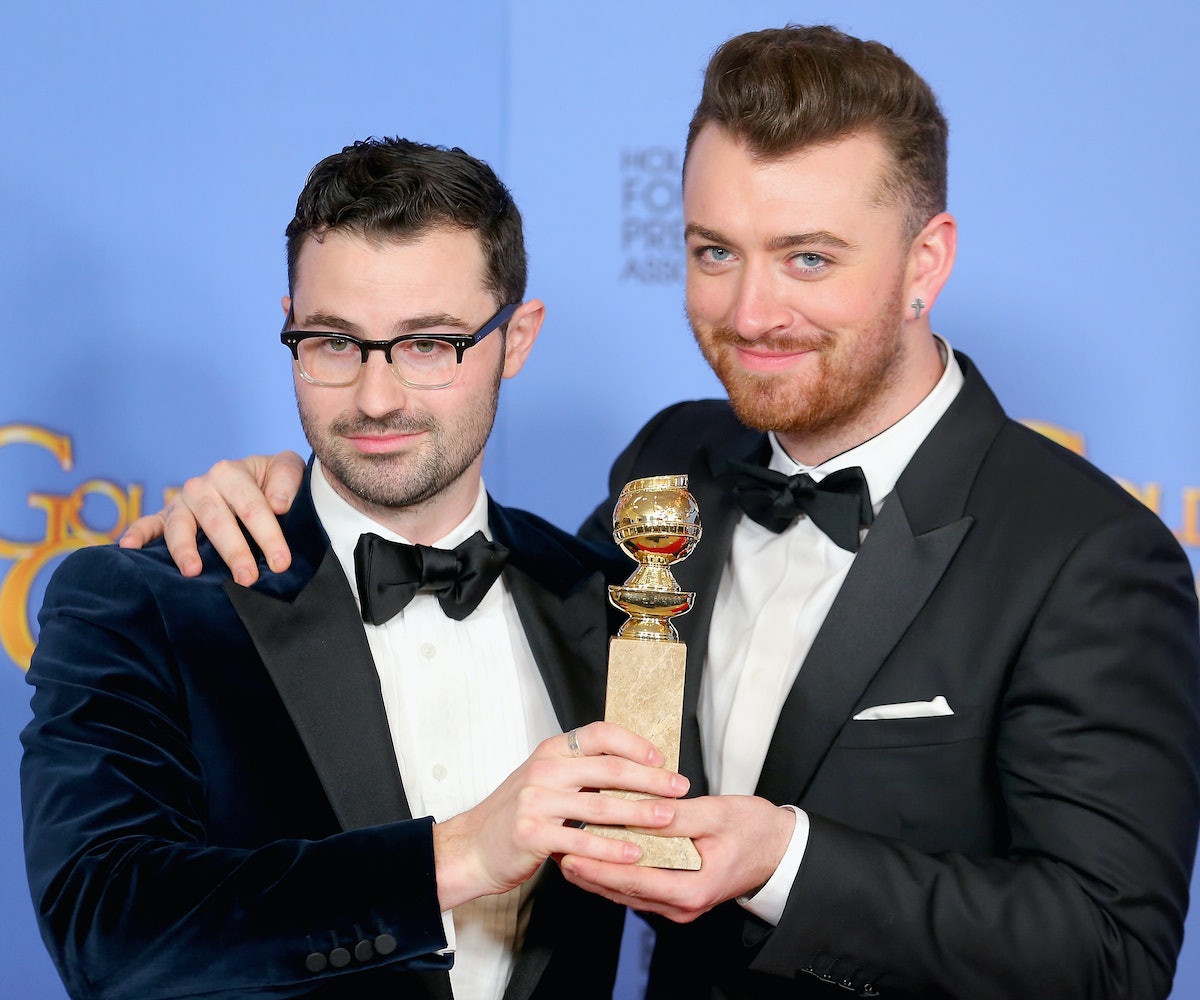 "Honestly, on a real level, I genuinely didn't think we were gonna get this," Sam Smith told the crowd last night as he accepted his Golden Globe for Best Original Song. The singer, who won for "Writing's On the Wall"—his haunting theme for this year's Bond movie,

accepted the award with co-writer and long-time collaborator Jimmy Napes, and went on to call this "the most interesting night of my life." Backstage, after his win had still barely sunk in, we caught up with Smith and Napes to talk about their unexpected victory, the possibility of an Oscar nomination, and what it means to be an openly gay artist in 2016.

Did you ever imagine yourself standing on a Golden Globe stage, winning one of these?

I promise you from my heart, I am in shock. I did not think this was going to happen

How does it cap off the last couple of years for you?

Getting to do a Bond thing was a childhood dream for as long as I can remember. Being able to do that, I feel like I won just when I got the chance. Getting an award for it is amazing because I love this song so much and I am so proud of it. I am just so glad other people do as well.

You're working on your follow-up to In the Lonely Hour. Do you feel the pressure to top that album's amazing success?

No pressure. I feel like each album is my baby. It is not going to be repeated. I need to find something else to talk about. Me and Jimmy have been in the studio the last few weeks actually, and I am spending this year at home in London just writing, and it is feeling good.

What are your thoughts on the possibility you might get an Oscar nomination Thursday morning?

What does it mean to you to be an openly gay person who has had such overwhelming success?

I don’t know. I am so proud of who I am. So I am overwhelmed every day that people have accepted me for being myself. I feel normal and the same as everyone else. You look back in history, even 10, 20 years ago, and it is amazing how far we have come. We have a lot more to do—there’s so many things that are wrong in terms of being gay and stuff like that, but we are getting there slowly but surely.

Were you shocked when a Spectre theme song was released on Christmas day by Radiohead?

Yeah, I was a little bit surprised. I actually haven’t listened to it personally because I did the

What was the last thing you Googled?

Myself. I’m joking. I actually don’t know. I think I Googled where to get a green juice and detox.

What do you feel about streaming?

NAPES: I think streaming is amazing and a really good way to listen to music, but I think the way it pays songwriters needs to be worked on. At the moment it is not quite fair, but it is definitely the future and an amazing way to consume music.