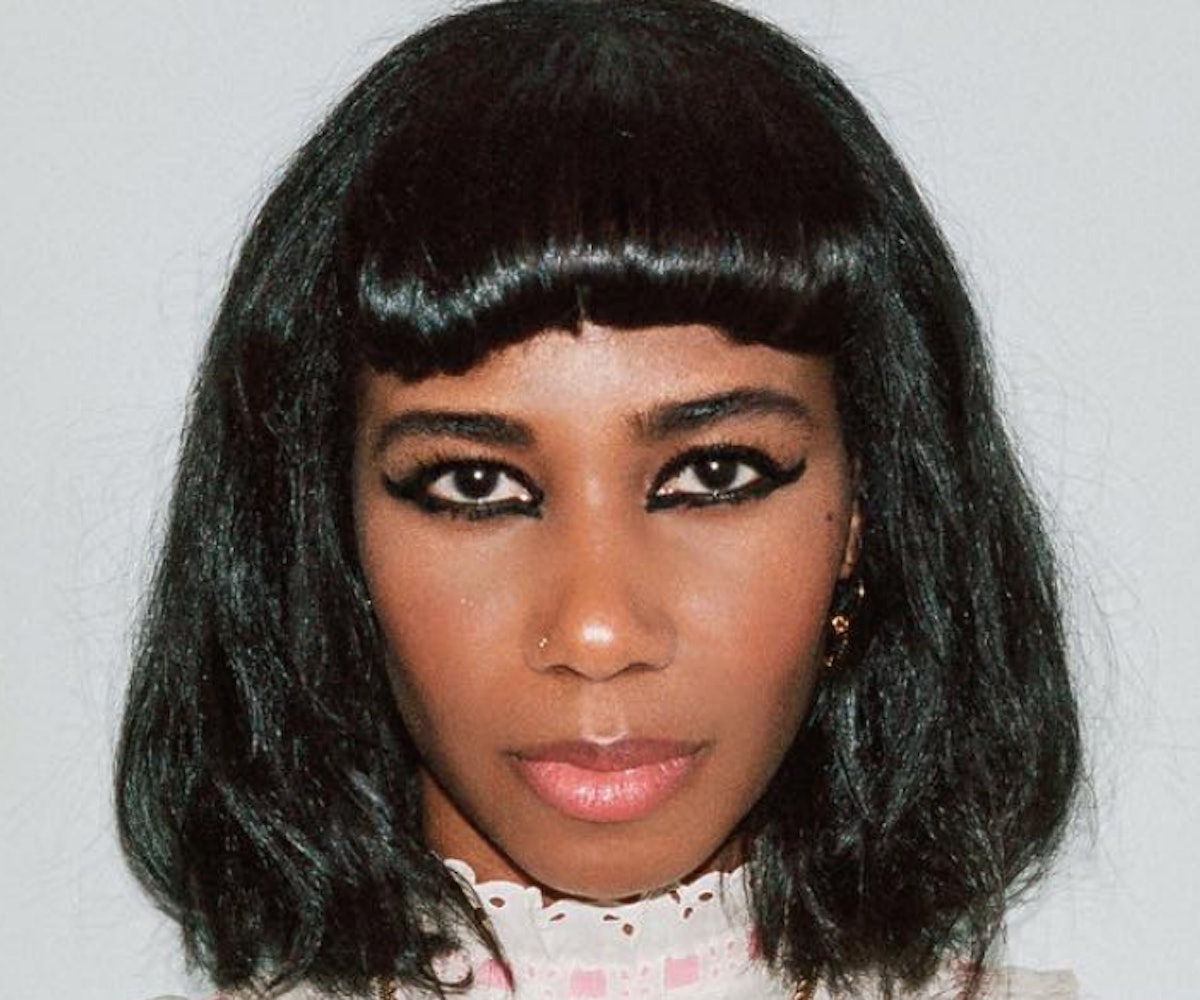 Santigold has always been one to defy categorization—and her recent album, I Don’t Want: The Gold Fire Sessions, is no exception.

Released last month, I Don’t Want: The Gold Fire Sessions was the result of a series of sessions with Mixpak Records boss Dre Skull. Connecting over a shared love of Afro-Caribbean music, the two began working on a series of tracks inspired by these sounds. And it was such a natural fit, that Santigold soon found her mixtape project becoming a 10-track love letter to the dance cultures that have become a formative part of her artistic identity.

However, Santigold is quick to note that I Don’t Want: The Gold Fire Sessions still capitalizes on the loose, spontaneous spirit of a mixtape, and that there's no easy way to define her sound. And alongside a newfound, unbridled energy that has continued to push her creatively, there's no telling where she'll go from here. Read our Q&A with her, below, to learn more about the recording process, her thoughts on mainstream music's appropriation of Afro-Caribbean sounds, and what she really thinks about that media-given "dancehall" label.

Tell me a little bit about the recording process. How did this effort differ from previous releases you’ve done?

It was totally spontaneous. It was light. That’s not usually what it’s like for me. I definitely like to sit with things for a while… But I didn't sit with this.

My instinct was to just spit it out. So just being able to throw it out there was kind of a challenge. But that was the plan, and that's what we did. It ended up being really fun, and it ended up being [this project where I could finish a couple of songs I had]... I had a song that I started with Diplo and that found its place on this record, you know?

As someone who is pretty careful about what you put out, what was it like just throwing it out all there? I can imagine that’s a little nerve-racking.

At the end—which was always the point where I was like, "It's not done!"—I literally just went, "Fuck it." I had just had twins, and they had just turned four months old. And I was like, "Look, this is supposed to be light and fun… like, where you're at." But I didn't have the time, focus, or energy to be upset or stressed about something that's supposed to be feeding my creative.

The opportunity to create is like... I feel like I'm on borrowed time every time I walk out of the house. You know? Not [in terms of] death, but from being a mom. So I've been finding myself working really quickly and more efficiently than I have in the past. I've been in the studio for the last couple weeks just so I can be out. I literally walk in, and we have four-hour sessions—which is unheard of. My sessions are usually like the whole day.

But [we’ve gotten to a point where] we're like, "Let's not push it.” And then we leave. And it's been so much fun, you know? I’m not saying that that's the end of the process, because sometimes the writing or the production afterward will take a long time. But still, it's not always so fast, and it's not always so light and so easy. [But I think right now, creation is] my meditative moment—what helps me get through right now. As a new mother, it's amazing to have the opportunity to get right back in there.

I'm just amazed at how you managed to have enough energy to (a) look after your kids and (b) literally produce a 10-track release.

I mean, I recorded [a bunch of stuff for this record] in 10 minutes—it's crazy. I think I'm learning that that's my personality, too, because I moved to L.A. a year ago. But I moved because New York is too fast. I love New York and how fast it is, but it's just hard to deal with the grind, and I was like I want to grind, but life is moving too fast. I want to be able to slow my life down and savor things that are not getting savored.

Then I got here, and it's just like... I don't know how to slow down. I'm trying to figure it out because I keep doing more and more.

Even though this album is a bunch of different pieces put together, did you find yourself gravitating toward any particular thematic threads over the course of the recording process?

Well, the other reason that I called it a mixtape versus an album, initially, was because the most consistent thread through it was that it was all going to be reggae, dancehall, and Afro-Caribbean inspired music. Whereas in the past, I think the scope was a little more broad throughout my albums.

Of course, within that, I pushed, and so it's still hodgepodge and still is collage-esque in its musical power, but the consistency here is that Caribbean feel. That is specific to this record. That's a genre I love. It's part of my musical spirit.

There was a lot of external debate surrounding this release. Like, the fact that it was being called a “dancehall album.” What did you think of that discussion and this particular labeling of your work?

It's funny, because the main person I talked to about that was Dre, and at first, we were like, "Uh, did you see all those things?" And he's like, “What? We never called it a dancehall mixtape."

But we were just laughing about how the press does its own thing. The press is its own machine. It's like, you say one thing and people just kind of quickly slap something on it, and don't realize that it's a big deal… Nowadays, with the internet, you just pick up a couple things, and that becomes what it is. You're like, “Oh, so we made a dancehall mixtape."

We, of course, have so much respect for any kind of Jamaican-style, Caribbean, and African music. But we're so [in tune with] the differences in all the stuff, that we're like, "We know that we did not just make a dancehall mixtape." It is dancehall-inspired, so there are a couple dancehall songs on the record... But, honestly, both of us have been around for a long time. We can't really give a shit about what people are saying.

Like, we agree with some of what people are saying. Because some of it's right, but I understand how people can be frustrated. People who know the music and love the music… it is kind of annoying when it gets into mainstream culture, and everyone's like [miscategorizing stuff].

[To that] point, sometimes I need to look online for my lyrics, because I don't remember them. But sometimes, at rehearsal, I'll have to try and find them on the internet… but it's such a joke. They’re so wrong, and it’s so frustrating.

I've contacted them so many times and try to get them the right lyrics! Like, all the right lyrics have always been in my actual record releases, so it's not like they aren't available. It’s just that no one fact-checks anymore. No one, ever.

[That whole culture] is scary. Like, recently, someone got angry online at me and said there was no way I could be Mexican-American—I was too dark and all this stuff. But I was like, “I'm not Mexican-American.” It was crazy on so many different levels. But apparently somebody wrote into my Wikipedia that I was Mexican-American, and it lived there for a long time—without anybody noticing it… But the fact is that people look to Wikipedia to find the truth. But the truth—or what people accept as true—can be so wrong. And so that's what happened. You know, people have gotten my lyrics tattooed on their bodies, and they're wrong.

But that's the culture that we're living in. So when somebody calls it a dancehall mixtape, are we surprised? Not at all, because most people don't know the difference between dancehall and reggae or Afro-Caribbean and Caribbean. To them, it really is all the same stuff, and dancehall is just a great sounding word—and it taps into a little bit of the culture. But, to use it as the blanket [term], it's wrong. It may be close, but it's not right. I think the [thing that bothers people though is that term] being thrown around a lot—because pop music has a lot of [uncredited] reggae influence right now.

On that note, I was curious to hear your thoughts on the mainstream, American appropriation of Afro-Caribbean dance culture, and where you see your record fitting into this particular conversation.

I always have loved the music, so much. And as a kid, some of the music that I loved the most is music that had reggae, Caribbean, and Afro-Caribbean influences in it. Like Blondie, The Clash, Toto, The Police. There's always been amazing music that's had a little bit of reggae in it. So, I love it. I'm not mad at it. I'm happy it's having another run. What always sucks and what becomes appropriation is when the people that don't traditionally make the music get the opportunity to have more shine and success and credit for it. More than the people that originated the music.

I would like for the playing field to be more level, you know? If you look at the award shows and stuff like that, you'll see that they still are not level. And that's where the appropriation starts or ends.

Santigold’s I Don’t Want: The Gold Fire Sessions is out now.