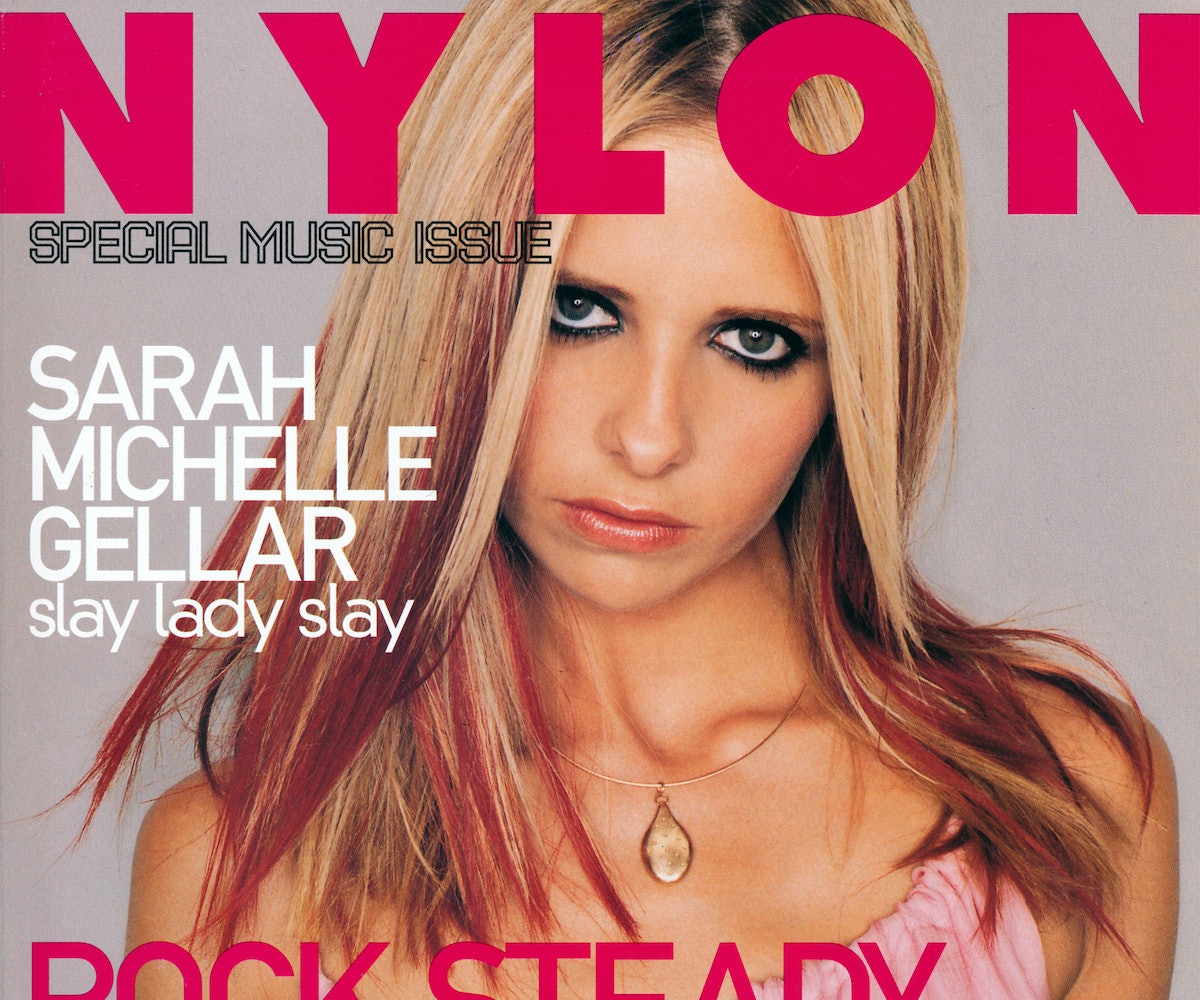 Our weekly Flashback Friday just got a whole lot cooler. We're still posting some of our favorite covers from past issues of NYLON, but now you can go even more in-depth with our faves by reading the cover stories in their entirety! Yep--consider this your really rad trip down memory lane. This week takes us to January/February '00, when our cover star, Sarah Michelle Gellar dished on being the coolest vampire slayer on TV. Check out the full article below and the photos in the gallery.

This is a story about blood and sex. About nubile teenage flesh and terrifying demons. The American media, among others, suffers from an unshakeable fear of young women. The media demonization of Amy Fisher exacerbated the porno-cliche of teenage girl as unbridled lust-monster, plotting to bring down families. The demonization of Monica Lewinsky went even further--young female lust can bring down the President. These demons, of course, translate to television characters as well.

Though television means nothing, it also means everything.

is about a character who challenges every weary, dangerous notion of adolescent female sexuality. Forget the neurotica of Felicity  and the facile bullshit of Dawson's Creek. Here, on the highest-rated show on the fastest-growing network, is a wide-eyed blonde who has somehow harnessed the chaos that lies between Barbie and feminism.

When Sarah Michelle Gellar first appears in the lobby of her Manhattan hotel, she is so slim, and her jeweled sandals so flimsy, that I fear I may have to carry her through the cobbled streets of SoHo. "I'm Sarah," she says, in a voice as West Coast thin as her body. We both ignore the other two-thirds of her name, as though they were unsightly accessories she had been talked into wearing by a stylist.

As she walks, the spaghetti straps of her top slip down her tiny shoulders, and the curls created for her previous evening's appearance on Saturday Night Live collapse around her neck in the SoHo boutique Tocca, she runs a tanned hand across a rail of gamine clothes. She stops at a gray wool coat with a sailor collar. "Oh, that's so pretty. I love that one," she coos, trying it on. Gazing at herself in the mirror, a look of confusion clouds her face. "I have this one already." She corrects herself: "Buffy has this coat."

For most of her life, she was not Buffy. She was a New York theater kid trying to make it in L.A., "barely able to pay rent." Next she was an Emmy award-winning soap starlet on

As The World Turns.

"At 15, my role required me to make out with Michael Nader, who was 50. I was playing older than I was. But I wasn't older and the best thing I can say about those days is that it taught me to memorize 60-page script in two hours and to hit my technical mark without blocking the other actors' light."

. From the ashes of the dreadful 1991 movie of the same name came a perverse, funny, romantic, highly intelligent, and immaculately structured series. Like Stephen King's

,  it used the supernatural as an allegory for the turmoil of adolescence. In

, every main character is an outsider. She's the most tragic in that she wants so desperately to lead a normal life. But the more she achieves, the more withdrawn she becomes. Falling in love with a centuries-old vampire who cannot allow himself to love her back does not help.

Sarah has starred in three films,

I Know What You Did Last Summer

(which she doesn't care for), and the steamy

(which she loves). But it is

that has lent Gellar's life a new set of rules, "ones that I am still trying to acclimate to."

Drifting through Tocca is the only time I see her anything less than together. Even in girlie shoes and deflating curls, Sarah Michelle Gellar is the person you'd most want around in a crisis, whether dealing with a house fire or red wine on the sofa.

She talks rat-a-tat, aided by an expansive vocabulary. She knows where she wants to get her juice, whee she wants me to get my coffee, where she wants us to sit. Rather than seeming diva-ish, it is a tremendous relief. "Yes, tiny blonde girl," one wants to weep, "show me how to manage my life for the next hour at least."

She's been managing her own since she was 12 years old. "I did an off-Broadway show with Matthew Broderick and Eric Stoltz when I was a kid, and they would go out to a bar afterwards and I would go home to do school work." The second her grades dropped below an A-, her mom, a school teacher, would stop her from going to auditions. No slacker girl, she -- so driven was the young Gellar that her anxious mother had to force her to ease up.

"Every single day, I was skating, doing tae kwon do, school, then karate, then auditions. Finally my mother said 'two things have to go and one of them isn't school.'" Sarah picked well. It is the melding go martial arts and melodrama that make

so compelling. To the end,

The 5-foot-1-inch incarnation of Whedon's vision shows me a tattoo on her ankle: a dagger hanging over a heart. "I got that after the demise of a relationship. I just wanted to mark it." This is where the blood and sex come in and the Sarah/Buffy crossover begins. There is a feminine belief -- one voiced in

-- that physical pain makes romantic pain real, since romantic pain is too abstract to touch or contain. Buffy's only respite from her love to Angel is that she gets to go out every night and beat everyone up, coming home with cuts and bruises, physical marks of the trauma she is suffering inside.

"Last year, with Angel and the heartbreak, I would go home and cry. My body couldn't work properly. I don't take the demons home with me, but I do take Buffy's pain. The vampires I'm immune to, but not the emotion. When we filmed the episode where Angel breaks up with her, I cried for 25 minutes. I thought I was having a breakdown.They had to shut down the set. When they say rip your heart out, that's really what unfulfilled love does."

"I have felt a love as strong as Angel. On

I felt almost everything she's experienced before. If you haven't loved someone like that I don't know how you could portray it."

The relationship is as profoundly sexual as it is viscerally violent. A recent episode, postponed post-Columbine because of scenes with guns, comes to mind. A more significant scene than the one involving guns showed Buffy begging a dying Angel to drink her blood.

For an eight o'clock show, Buffy gets away with a lot. Vampirism in itself has quasi-sexual connotations -- teeth penetrating flesh, the traditional camera-down-cleavage view as the vampire feeds on his prey. But this is a show where a pivotal plot has the star-crossed couple coming so hard that they literally turn the town upside down (experiencing the "euphemistic perfect happiness," Angel turns evil again and sets out to destroy Sunnydale).

Another episode depicts a parallel universe where geeky Xander gets off watching a leather-clad Willow burn the flesh of the chained Angel. This is highly, highly pornographic, the kind of stuff on which the Marquis de Sade built his considerable reputation. Gellar rolls her eyes.

"Television is not supposed to be a public service announcement. When Buffy and Angel slept together, there was an uproar because we didn't show condoms on the night table. Oh come on!" she hollers, "This is a 16-year-old girl having sex with a 244-year-old vampire! He shoots blanks! Okay, people? Lessons are to be learned from parents and teachers. Not television."

generally concludes with a moral lesson, except

. Gellar's favorite episode is "The Invisible Girl," where a student feels so neglected and invisible at school that she actually becomes it. Gellar recalls experiencing loneliness that severe, when she was 13 years old and returned to school from a four-month out-of-town run in a Neil Simon play. "The attitude was 'Think you can go away for four months and come back and we'll still be your friends?' I thought the answer was yes. I came close to having a nervous breakdown. I could not function on a normal level at that point."

Ever since then, Gellar has developed intolerance for any comment that takes her back to high school. "People can be really cruel. At the Emmys, Bill Maher made a joke about Calista Flockhart and I wanted to cry and I wanted to scream."

Her response is interesting in light of the persistent tabloid rumors about Gellar's own diminishing weight. "I'm sorry, Sarah," I say, "but to me Calista Flockhart looks very, very ill." She draws a spaghetti strap back onto her bird-bone shoulder.

"But does it help to have people make fun of you on TV?" she softly asks.

I nervously eye Gellar's half-drunk vegetable juice. "But does it help other women to see her on TV? The people who allow her to keep working should be intervening, just as you would with an alcoholic. Don't you think?"

"Never knock a person if they're down. Why do people always pick on the defenseless?"

"Okay," Gellar concedes, apparently missing the point of just how sick Calista Flockhart looks, "it's not fair for women watching us. How can anyone be as thin as we can? We have trainers to work us out. We have specially prepared meals."

She will only address allegations of her own problems with eating and body image in the past tense, referring to her time as a skater: "Skating was even more competitive than show business. You know what it's like in those locker rooms. Ruthless."

Like the show that has made her a pop-culture icon, Gellar is a dichotomy. She is a kick-ass heroine in a highly physical action role, yet the tabloids claim she is wasting away. She is a tae kwon do expert whose acting easily matches the far more fussed over Claire Danes. She despairs of "all these young actors posing half naked on magazine covers," just as she regrets the leather corset cover she shot for

. "I was so excited to be offered the cover. But I was a little too young to do that; I wasn't comfortable. I cried through the whole shoot because I wasn't ready to be in leather in a public arena." And yet, "Nobody talked me into it…except me."

Buffy is part Joan Jett, part Tori Amos. She is part leather rock-bitch and part fairy at the bottom of the garden, exploding with passion. Sarah can do anything she sets her mind to, and yet she has to check very carefully before leaving a hotel in case she is being followed. Before she hops a limo to

, I ask her to tell me more about the heart and knife tattoo on her ankle. She hugs a fluffy white sweater to her rib cage.

"I was feeling pretty low. It's to remind myself how precarious love is. The knife dangling over the heart," she pauses, "about to strike." -- EMMA FORREST