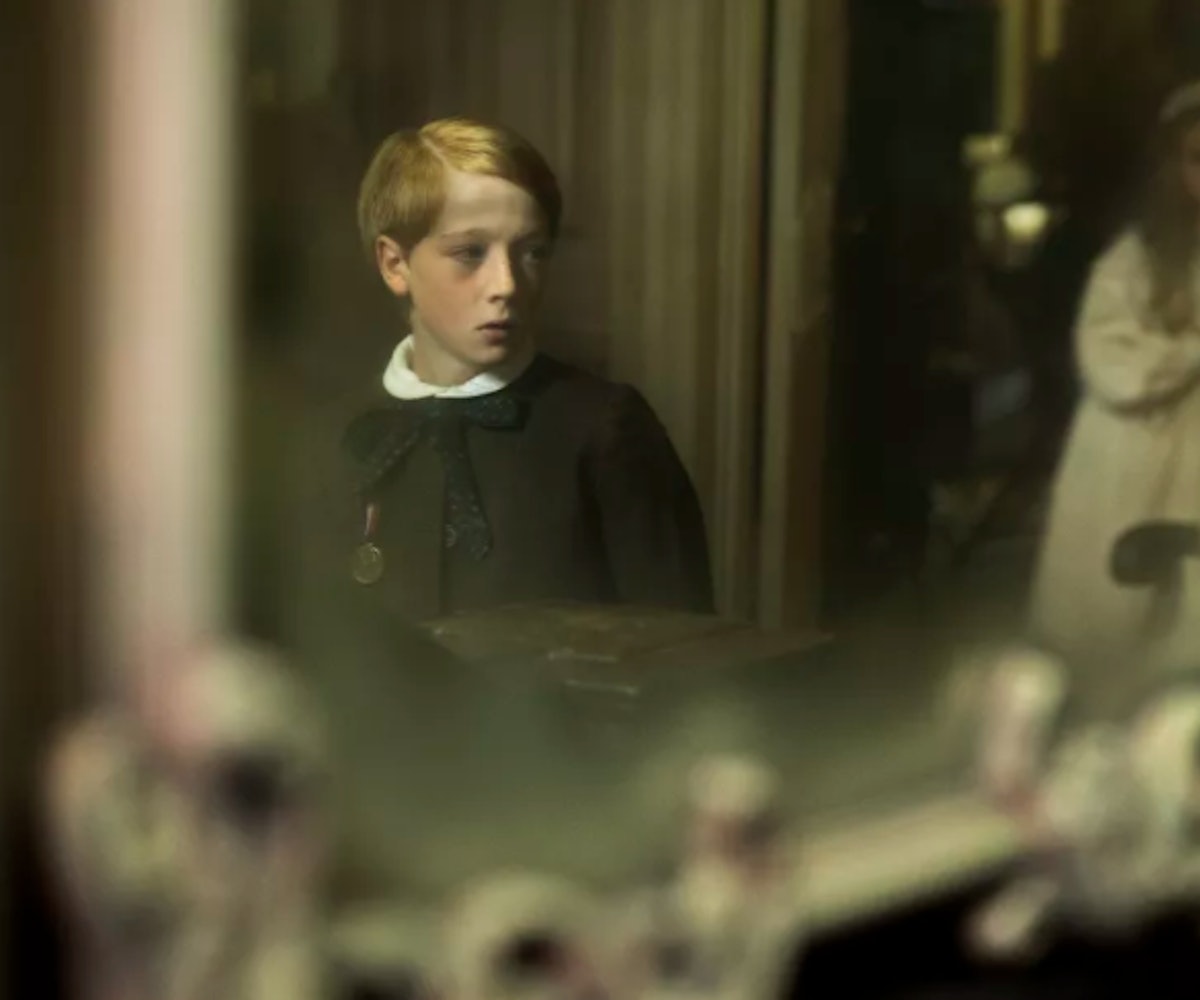 Few authors working today are as capable of writing novels as profoundly unsettling as Sarah Waters. Her characters and their lives stick in you, like burrs, and then pull you along into their darkness. Though I've long been a fan of Waters' work, I had not yet read her 2009 novel, The Little Stranger, prior to seeing its new film adaptation, directed by Lenny Abrahamson, and starring Domhnall Gleason, Ruth Wilson, and Charlotte Rampling. The plot opens in post-World War II England, and centers around a dilapidated country estate, Hundreds Hall, and the upper-class Ayres family who has long inhabited Hundreds, though is no longer able to take care of it. Told through the perspective of Faraday (Gleason), an unassuming local doctor who insinuates his way into the family's home and life as both those things start unraveling, The Little Stranger has elements of the supernatural and mysterious, but is ultimately a tale of power and patriarchy, and, as Waters told me over the phone recently, "the futility that can come with clinging on to the past."

I spoke with Waters after tearing through her novel, which I bought shortly after watching the film. The two work together as companion pieces almost, each offering new texture to the experience of the consuming the other. I was interested in hearing about her experience seeing her novels translated to the screen, why this period of British history was so fascinating to her, and what it was like to tell a story through the eyes of a toxic male narrator. You can read her answers to those questions and more, below.

The Little Stranger centers around a once-wealthy family that's fallen into disarray; what was your attraction to this story? And to this time and place?

The book really grew out of thinking about sexuality and gender and the strange freedoms of the time right after [World War II]. I was also very aware of class being a big issue right after the war; it was such an interesting time in British history. The working class people had just been through this dreadful ordeal and wanted a better country to live in and wanted better housing and better healthcare—which they found really, with the socialist government they'd voted in. So they were on the rise, and partly as a result of that, more upper class people were kind of in decline.

Where the Ayreses and Hundreds Hall came from, was from me seeing that that was something that was really happening for the landed gentry, people who had grown up generation after generation having inherited these huge great houses and having inherited a way of life that went with it. Suddenly, they couldn't get servants anymore, because working class people didn't want that, they wanted better jobs and better positions. And so can you imagine those houses, they needed an army of servants to be maintained, like you'd see in Downton Abbey. So you take those people away and the houses literally began to fall apart. It was a time of turmoil really for that kind of class. That was my starting point. I hadn't originally planned for it to be a supernatural novel, but I came to think about haunted houses and poltergeists and unruly energies, and it seemed to fit so well, it seemed to work so well as a way of capturing all the tensions of a period, that once I thought, I could do this as a haunted house novel, it really took off in my head, and I could see it all so clearly.

I feel like people either go one of two ways with a supernatural narrative: They're automatically skeptical or they believe in it wholeheartedly. But The Little Stranger, because it is told from the very specific perspective of a questionably reliable narrator, actually precludes that, and allows for more nuance, since everything is being filtered through Faraday's voice. It's like we assume his sensibility. What was it like inhabiting him? Was he always going to be so central to the story?

Early on, the doctor figure was just at a bit of a distance, he was kind of a friend of the family, and he wasn't really very emotionally involved with them. You know, in classic ghost stories they're usually told by someone at something of a remove—it's quite a nice device. And then I got more interested in him as a character and as a potential narrator, and exploring the class background. He seems to be living the professional middle-class existence, but he's not quite accepted by the gentry folk around him. He's moved away from his roots, so he's not really welcome there either, and he's uneasy in the world. As soon as I introduced him into the mix, it all came together.

I found myself identifying with him quite closely—almost sort of worryingly closely. I found that there was lots of me in him, or lots of him in me, I'm not quite sure. And I enjoyed writing him. I've had male characters, but this was the first male narrator, and there were things I had to think about. There were thing I had to rein in, that I kind of felt wouldn't be his concern. The biggest technical challenge for me writing from the perspective of Dr. Faraday was having to keep him on the surface, very calm and very rational and a bit boring really, and just hinting what's going on underneath. Which Domhnall does with his performance, a very still performance. And what Domhnall had was a similar issue for me: how to keep the doctor interesting and compelling and sympathetic while making him such a stuffed shirt. He's almost literally a stuffed shirt, in the sense that he's just inhabiting his professional role. He doesn't have a Christian name, he's kind of missing really. He doesn't have an emotional element, or at least it's pushed so far down that it becomes something else, it becomes a bit warped. I did enjoy writing him, I did like that challenge of making him unreliable, or at least allowing the reader to only understand his unreliability quite gradually. I think some people don't really see him as unreliable at all, but I think by the end we see him as a far more sinister figure than he'd been all along.

The plot certainly builds to a major climax that's one of the more unsettling ones I've seen or read in some time. Did you always have that ending in mind? Do you always have all the plots figured out when starting a new novel?

It's different with each book, but with The Little Stranger, once I decided on the haunted house element and once I'd decided on the doctor having this complex relationship with the house and family, I had pretty much a vision of the whole book, and I definitely had the image of him as a caretaker, kind of gloating over his ownership over this house. One thing changed actually, and it became even more significant in the film adaptation, and that was the relationship between him and Caroline, because I really didn't see that coming. I kind of saw them as unlikely friends. But then I wrote that scene where they go to the dance, the doctors' dance, and I thought, oh, there's kind of something going on here. And that took me by surprise, but I liked it, and I saw immediately then how fruitful and how useful it would be. Because his relationship with Caroline kind of sums up his whole relationship with the family and the house. Because he desires her but also resents her, and it's really an ugly mix of feelings, and very controlling. She's his way into the house, and she sees him as maybe a way out. It's kind of a doomed relationship.

It's so fascinating, the paradox that is their foundation, that she's his way in, and he's her way out, since it ultimately leads to the destruction of both their dreams. That mixture though of resentment and desire was so palpable in the novel, and really carried through to how it was portrayed onscreen. In fact, this was one of the more faithful adaptations of a novel's spirit that I've seen. How does it feel to have your work translated onscreen?

Well, it's strange, because if you go into it and feel too precious, it won't work, because things have to change a bit, even in incredibly faithful adaptations, things have to go in that translation. And also, [a film] gives the characters a look, a voice, a manner. It's so concrete. On the page, there's room [for readers] to visualize their own characters. But what happens is it becomes this other work that's intimately related to the book, but it has its own agenda. And I found that fascinating really, just from a creative point of view. I've enjoyed seeing [adaptations]. It's exciting, it's flattering really, to think these very talented people [like Lenny Abrahamson and Park Chan-Wook, who directed The Handmaiden, based off Waters' novel Fingersmith] want to take your book and do something with it. It's exciting to see how faithful the film can be and still be very much its own thing. The Little Stranger to me feels incredibly faithful to the novel; it totally gets the characters, the relationships, the atmosphere and spirit of the book, so it's a little bit unnerving sometimes to see a book brought so closely to life like that, but it's still so different. I enjoy the fact that a book of mine can give birth to another thing.

The Little Stranger can be seen in theaters now, and the novel can be purchased here.