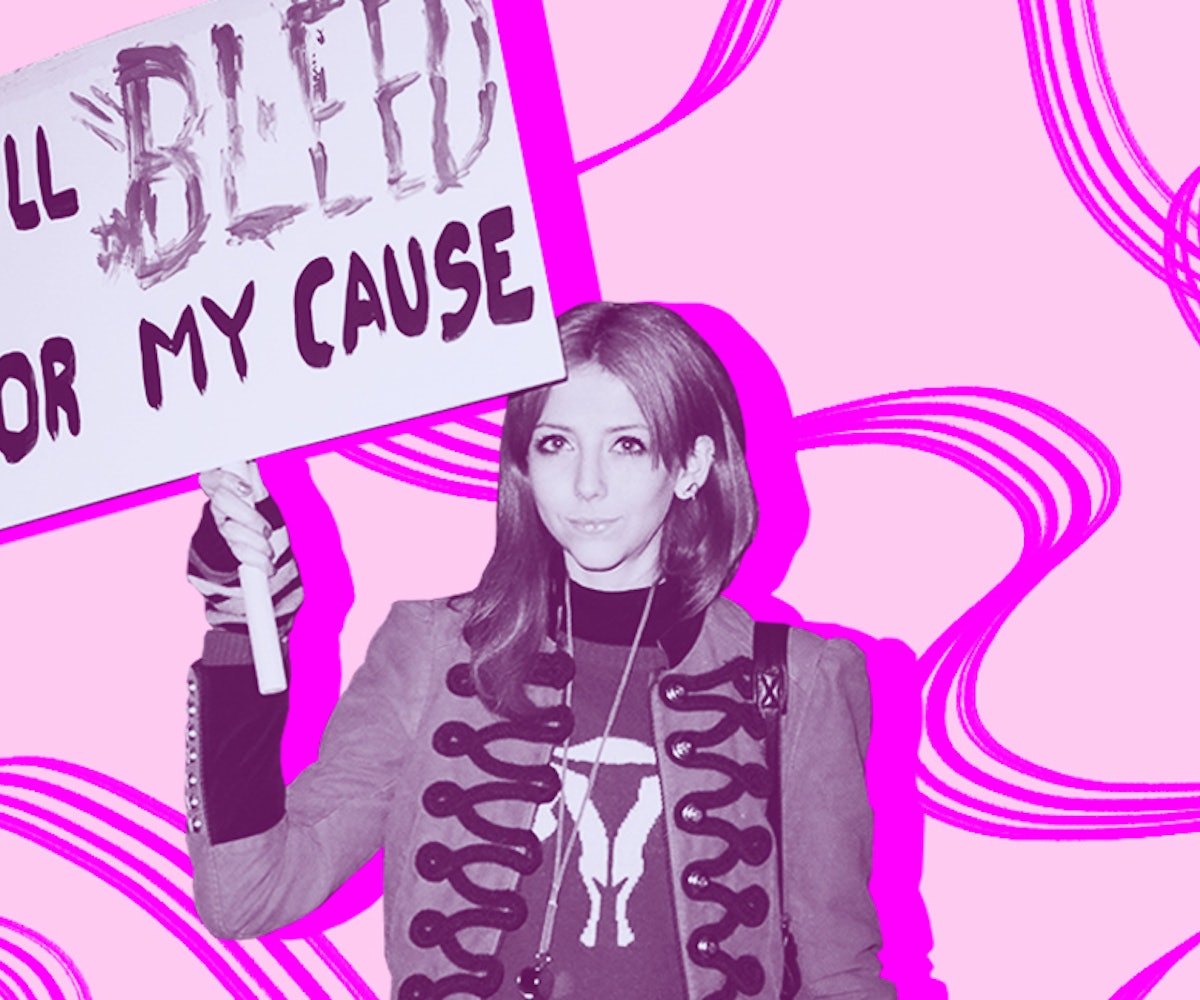 Scarlett Curtis got the idea to start The Pink Protest, a community of activists working on issues like "period poverty," after the 2016 U.S. presidential election. Though she’s from the U.K., Curtis currently lives in New York and was inspired by all the women who were organizing initiatives and protests following the catastrophic results. She’d also already been working for big NGOs (non-governmental organizations) at the time and wanted to get more involved with grassroots activism. “Me and a friend, Grace Campbell, started Pink Protest with the goal to really support younger activists and support young women and young teenage activists that we knew in creating campaigns and building out campaigns and building video content,” Curtis says. “We just wanted to help.”

Their first collaboration was with Amika George, who started an online petition called “Free Period.” Its aim is to tackle period poverty in the U.K. “When we met her, we were so blown away by everything she was doing,” Curtis says. She and Campbell ended up helping George build her website, handle her social media, organize protests, and connect her to politicians. In December, hundreds of supporters in the U.K. came out to call upon Theresa May to end period poverty in the U.K. In March, the government allocated 1.5 million pounds to address the issue. Curtis is hoping to increase the amount next year.

Ahead, we chat with Curtis about where her interest in activism stems from, the stigma surrounding the activist label, and what’s coming down the pipeline for The Pink Protest.

The Pink Protest's bio includes the words: "The revolution will be posted on Instagram." What role do you think social media has played in activism?

I think we have this stigma against the word "clicktivism," and I think we fill up this idea that all Gen Z and millennials are good for is clicking on links, but not showing up. And I think the truth is that online petitioning is the first step in a lifetime of activism. What we really saw with Free Periods is that the petition had thousands of signature and loads of people posted on Instagram about it and, I think, if you were cynical, you would have looked at that and said, "Yeah, but none of them are gonna show up to the protest, it's so easy to post on Instagram and not do anything." In the end, though, we had 2,000 young girls and men show up in the freezing cold outside Downing Street, and every single one of them was there because of Instagram.

They were there because they saw it online, and it sparked something in them, and they decided to show up. I think that's the trajectory we're seeing a lot more now. Instagram is this amazing place to find like-minded people, to connect with people in a way that you would never have had the opportunity to. Some of these girls lived in rural England, and Instagram was the way they found this protest and they came down to show up. I think, if we're to look at it like that, we can suddenly start seeing how useful it can be as a tool of activism.

How did you first get involved with activism?

My parents have always worked in charity, so that's always been my whole life. They organized this charity in the U.K. called "Red Nose Day,” which has just started coming to the U.S. in the last few years. I grew up in that, but it always felt quite far away.

I was very ill when I was a teenager—I was in a wheelchair from ages 14 to 17—and, during that time, started to read a lot more about charities, feminism, and activism type issues. I think, what I'm really trying to do now, is bring the mentality that [my parents] had in all their charity work to a more personal activism; more to do with politics, fighting for your own rights and the rights of others.

I feel like people are hesitant to label themselves as activists. Why do you think that is?

I think there definitely is a stigma. I think that, in the same way as with the word “feminist," [negativity around the word "activist" deters] people from doing that work. I think people may be sticklers about these words to get less people involved. I think the truth is, activism can be anything from volunteering for a few months to being someone who dedicates their whole life to a cause. We need to strip away the stigma associated with the word because it's an amazing word. My friend says we think an activist is someone who's, like, throwing blood over a fur coat and, like, pissing outside Parliament, and it's really someone who wants to make change and is going about doing that instead of just talking about it.

What does being an activist mean to you?

Just doing anything you can to change the world. And I know that's such a big statement, but that really could be something as simple as picking up a piece of trash off the street or recycling or it could be something much bigger. I think there aren't guidelines for being an activist, it’s just doing whatever you can.

What are some of the other campaigns you’re working on?

We've always been working on the Repeal the 8th campaign which is happening in Ireland at the moment, where Irish people are finally having the opportunity to legalize abortion. So, we'll be doing some events about that coming up. We've been working a lot with Sad Girls Club, which is run by my amazing friend Elyse, and it's all about mental health support, especially for women of color who have been excluded from that conversation in the past. We organized their first event in the U.K., which was really amazing.

I think it's just our goal to make activism something that's ongoing and doesn't necessarily take the biggest amount of time, but it's something everyone can do.