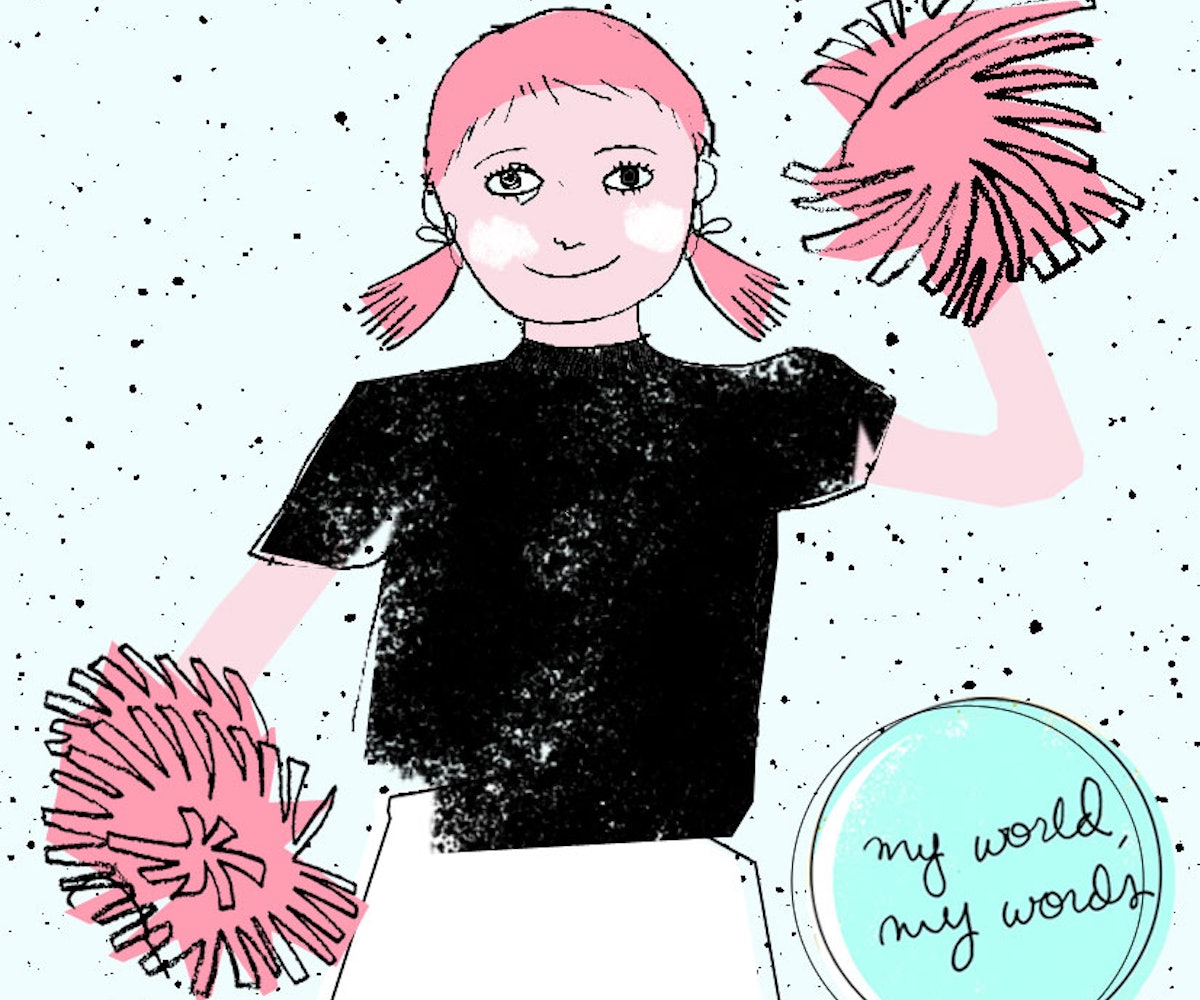 At 25, I think I generally have it pretty together. I work really hard; I’ve made it through some tough times; and I’ve even learned some things in my quarter-life, like that high-waisted pants are actually flattering and some friends are better left behind. Despite those things, I often feel like having confidence in who I am and what I want is something I preach more than I practice. After talking to a group of similar-aged girlfriends about it, I realized that collectively our confidence level has stagnated. Maybe that’s just life, but it seems to me that when a group of smart, independent women can’t admit that they deserve what they work hard for, or worse, ask for what they want out of life without apologizing, we have a problem.

Now, enter my nieces. Ellie is six and her sister Abbie is eight. Miraculously, there are times when it seems like they literally couldn’t care less about what anyone thinks of them. Case in point: They both are in cheerleading and they’re actually very good at it, but I've heard people, even family members, make fun of them for their sport of choice. Abbie, being the older and wiser one, generally seems unaffected, but Ellie, the cheekier of the duo, gives one of those awkward-kid dirty looks and then does a back handspring that would put me in the hospital if I tried. With the freedom from adult consequences, these two little girls possess a type of self-assurance that I don’t know if I could emulate on my best day.

I asked Ellie what she thought it would be like when she is in her 20s. At first she was nervous, like she didn’t want to offend me, then she said, “A woman is just like a big girl. Being a woman is probably harder than it is to be me. You have to like go to places, and you always have to rush to get there, even when it’s cold. But it’s definitely awesome because you could wear makeup everyday if you want to. Actually you can do anything that you want to.”

“Anything you want” is much more romantic from the eyes of a child but I knew where she was going. She explained, “You don’t have to be in school anymore because you learned how to read and do what you want to do. Like after I learn to be a dentist, I can just do that.” Just like that, she thinks. "What if no one hires you?" I asked. Abbie chimed in, “Then we’re just going to own the dentist office!”

After 25 years of life, including schooling, jobs, and general passion, I still can’t say the word “writer” without feeling weird or nervous, so I wondered how they could possibly be so confident in their dental aspirations.  While I recognize that children who are still putting teeth under the pillow at night may not grasp the idea of graduate school, their goals are very convincing.

After asking me to explain what confidence means, Ellie said,  “I just am. If I know I want to do it, I’m just going to do it. Sometimes I get really nervous before I have to do things like school work or cheerleading but then I just have to say to myself, This is gonna happen, I’ve got to just get out there and do it.”

The girls definitely have a point about how much your inner dialogue affects your confidence, but I realize that they both have each other to help them. I can certainly understand the importance of strong female relationships in your life. Between my nieces, sisters, and incredible female friends, my girlfriends are the one constant that I can count on to give me a boost when I need it. As I’ve gotten older, though, boyfriends, jobs, and just life in general gets in the way and it’s harder and harder to maintain these relationships. After I explained this part of adulthood to Ellie, she looked at me perplexed and said, “Yeah, I always am going to have girl friends. Nothing is as fun as when you get to hang out with your best friend and you can just be sassy together.”

Sassiness is something I can definitely get behind. In general, I am a pretty tame person, though I’ve been known to tell someone off if it’s necessary. But when it comes to bullies or haters or whatever you want to call them, as much as I say it doesn’t affect me long term, it does. I am a total ruminator.  Even when someone flips me off on the highway it takes me a little while to get over it. Meanwhile, as I’m talking to Ellie she’s wearing a cheer bow that says, “doubt me, then watch me.”

As I’m finishing this article, I am having the most unnecessarily intense battle with myself. I asked my boyfriend to read the story and as he did, I literally paced around my bedroom regretting it the entire time. Are my nieces able to act like they do because the weight of what it actually means to be an adult female in this society has not set in? Or, is it because somewhere along the line, we’re made to feel like we can’t do it all?

All I know is this: No one ever explicitly told me that I can’t do the things I want, but somewhere along the way I began to tell myself that I couldn’t. But self-confidence isn't something we should age out of. Maybe we all need to look at how these two little girls feel about themselves and try to find it within ourselves again.