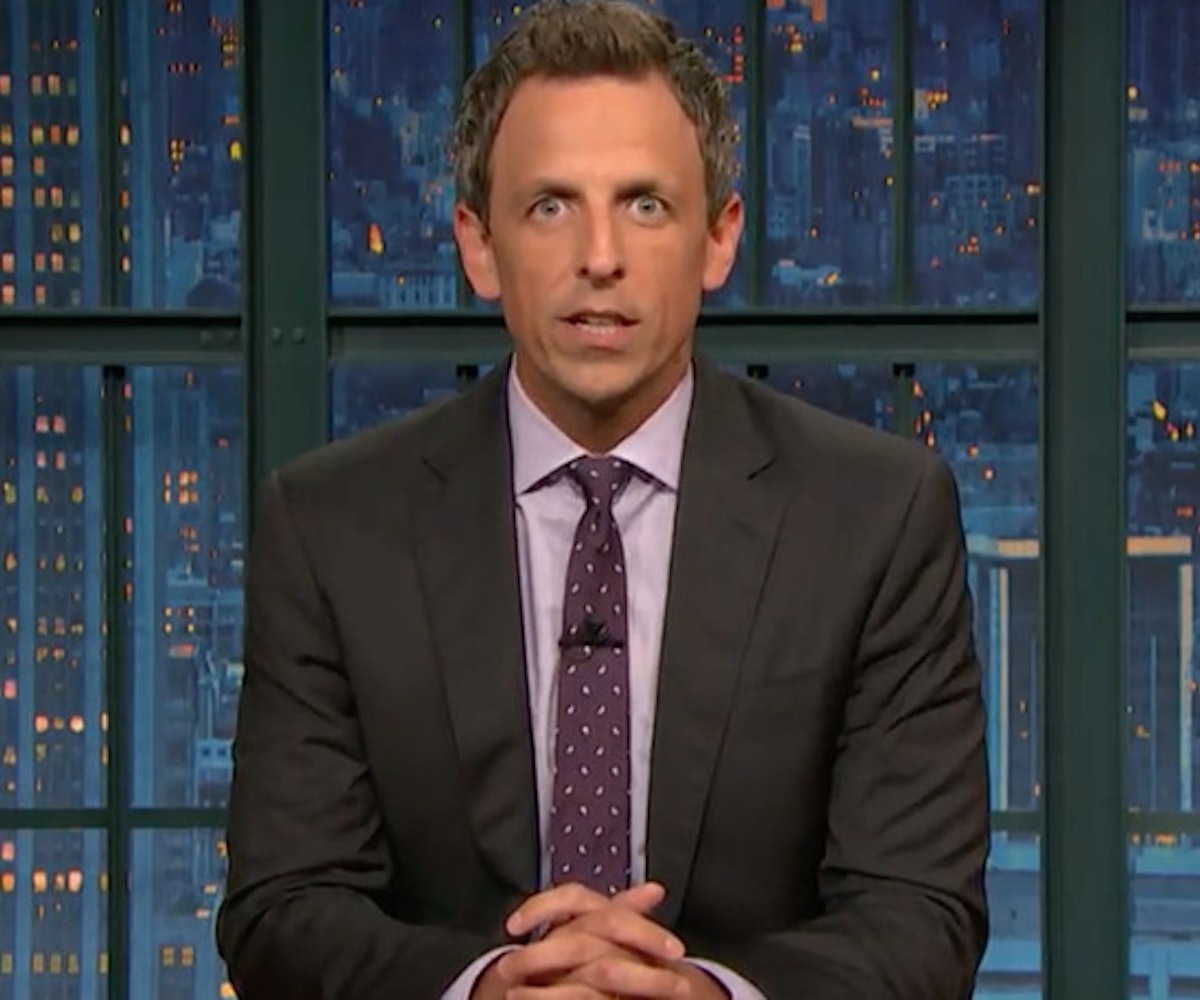 We're living in a time when late night hosts are able to display more dignity and human decency than the president of the United States. Last night on Late Night with Seth Meyers, the comedian opened with a somber statement addressing the violent white nationalist rally in Charlottesville, Virginia, over the weekend.

"On Saturday there was yet another terror attack on American soil," Meyers said. "This one was allegedly perpetrated by a white supremacist named James Fields against a group of protestors in Charlottesville, Virginia. He drove his car into a crowd and killed a woman named Heather Heyer. It was a horrifying incident that left most of the country stunned and terrified, but on Saturday you didn't hear her name, or the terrorist's name, or even the word 'terrorist' from our president."

Then Meyers played the clip of Donald Trump talking about the rally, during which he condemned hatred, bigotry, and violence "on many sides."

"If that choice of words made you feel sick to your stomach, the good news is you're a normal and decent person," Meyers said. "The jury's still out on the president, as he initially refused to condemn the white supremacist movement in this country."

Meyers went on to point out that Trump's refusal to acknowledge racism isn't that surprising, given that our president himself is racist. He said a lot of people ignored or "played it down" when Trump accused Barack Obama of not being born in America. "It was racist and insane, but he was written off as a clown," he says. Then Meyers rattles off all of the other racist things Trump has done, like call Mexicans rapists, refer to Elizabeth Warren as Pocahontas, bring known white supremacist and bigot Steve Bannon into the White House, attempt to deny black people the right to vote, and the list goes on.

"Donald Trump did not immediately denounce the white supremacy movement when given the chance," Meyers said, "and now whether he knows it or not, many of those people see him as leading that movement." Then, he calls Trump out for not being a president at all. “You can stand for a nation, or you can stand for a hateful movement. You can’t do both. And if you don’t make the right choice, I am confident that the American voter will.”

Meyers wasn't the only one speaking up on the issue. Jimmy Fallon opened his monologue on The Tonight Show by saying it was his "responsibility to stand up against intolerance and extremism as a human being." While he was watching the news over the weekend, Fallon said, his daughters, two and four years old, were in the next room playing. "As kids grow up, they need people to look up to," he said. "To show them what's right and good. They need parents, and teachers, and they need leaders who appeal to the best in us. The fact that it took the president two days to come out and clearly denounce racists and white supremacists is shameful. And I think he finally spoke out because people everywhere stood up and said something."

Then, Fallon emphasized the importance of white people speaking out against white supremacists in America. "Ignoring it is just as bad as supporting it. And remember, there are people who have given their lives to make sure that this kind of hate doesn't spread; they have fought and died on the right side of history. One brave woman in Charlottesville, Heather Heyer, died standing up for what's right at the age of 32. I can't look at my beautiful, growing, curious daughters and say nothing when this kind of thing is happening. We all need to stand against what is wrong, acknowledge that racism exists, and stand up for what is right and civil and kind—and to show the next generation that we haven't forgotten how hard people have fought for human rights. We cannot do this. We can't go backward."

On Late Show, Stephen Colbert joined Fallon and Meyers in denouncing white supremacy and calling out our president for being unwilling to do the same. “Our hearts go out to the victims and their families, and it is difficult to express how heartbreaking it is to see something like this happening in our country,” Colbert said. “But here’s one thing that’s not difficult to express: Nazis are bad. The KKK? I’m not a fan. That wasn’t hard. That was easy. I enjoyed saying it.”

Referencing Trump's "many sides," comment, Colbert said, “Mr. President, this is terrorism, not your order at KFC. How can you possibly say you condemn this in the strongest possible terms when you don’t even name the groups responsible or say what they did? I’ve seen angrier Yelp reviews, and they were not afraid to use the word ‘Nazi’ when describing how long their jalapeño poppers took.”

Colbert noted the real irony in having a president who doesn't shy away from controversy and often calls out his enemies in very specific terms—whether it's mocking a journalist's face lift or casually threatening North Korea with nuclear war—be afraid to condemn Nazis. “It’s not like Trump is a shrinking violet; he’s known for criticizing things,” Colbert said. “If only the president was as mad about neo-Nazis murdering people in the streets as he’s been about: Hillary Clinton, the New York Times, CNN, Joe Scarborough, Kristen Stewart, the cast of Hamilton, Diet Coke, Nordstrom not selling his daughter’s clothes, Arnold Schwarzenegger, the mayor of London Sadiq Khan, me, the state of New Hampshire, Gold Star families, Penn Jillette’s Las Vegas show, the movie Django Unchained, Meryl Streep, and lady Ghostbusters.”