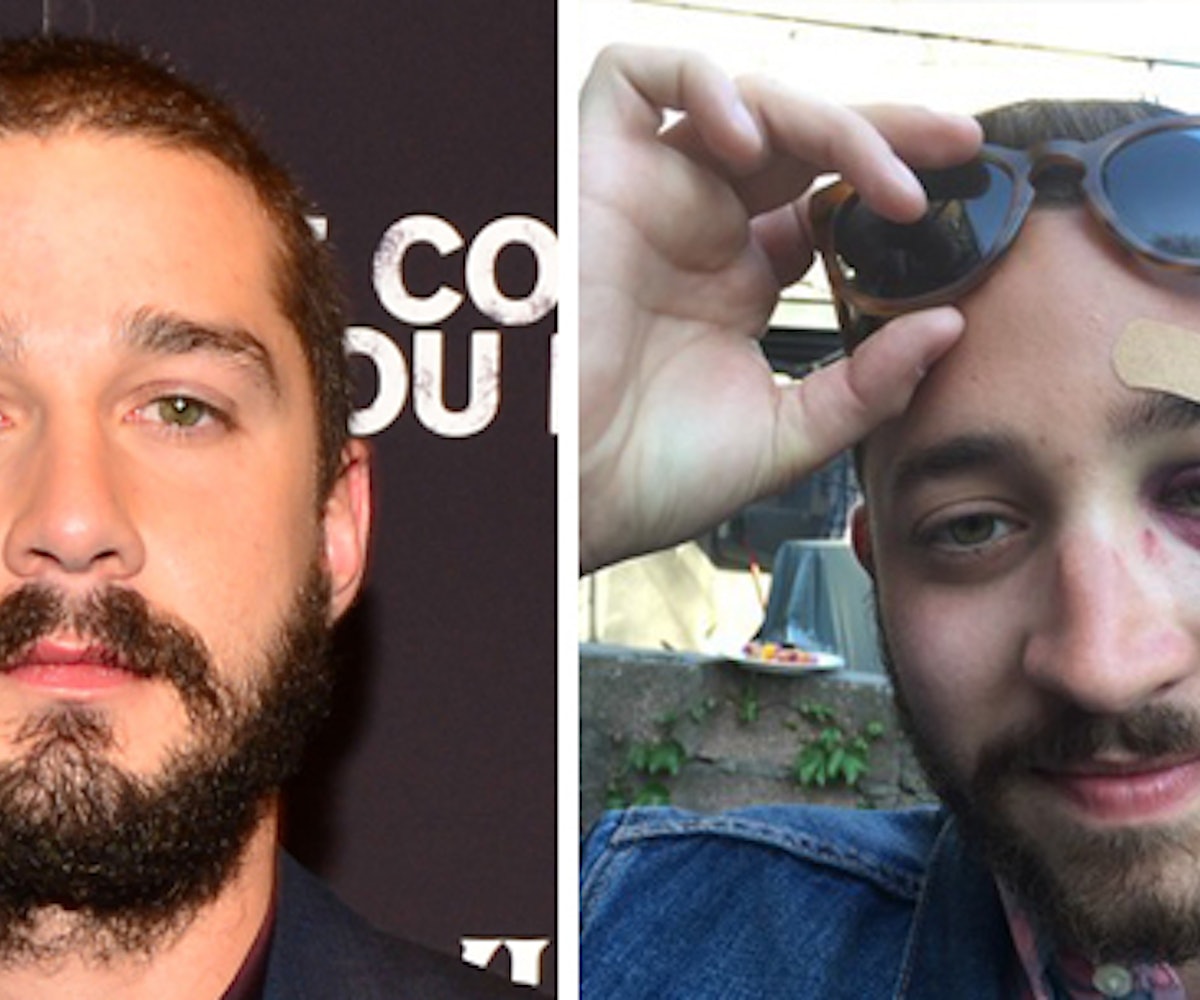 From Leonardo DiCaprio's Russian reality show-wielding look-alike Roman Burtsev to Konrad Annerud, the young Leo-esque Instagram heartthrob, to Matt Katzenbach, the guy who crashed Sundance parties posing as Bradley Cooper, it seems like life would be pretty easy for celebrity doppelgängers. But, as the Internet discovered earlier this week, there is somewhat of a dark side to looking like a Hollywood double.

Over the weekend, Mario Licato was going about his daily life when all of a sudden he was punched by a stranger for "looking like Shia LaBeouf." The story went viral and eventually made its way back to LaBeouf, who tracked Licato's number down and called him up. Here, Licato tells us about his strange week.

So what happened the day you got punched?

I was at lunch in Cobble Hill [in Brooklyn, New York], and around 7:30pm, I was leaving my friend’s apartment to go to at a show at Pianos. I got on the F train to go to the show and meet up with a bunch of other friends. I left the train and was walking up the stairs out of the station. I was about four steps up when some guy was walking down the stairs. I looked up and I just saw a fist come at me. I fell to the ground, and as I was falling, I hear, “That’s because you look exactly like Shia LaBeouf.” And then I passed out for a second.

I was on the ground, and I just looked up, and I had blood all over my face. My glasses were broken down the middle, in half, split off my face. And then this couple and a bunch of MTA people were like, “Holy shit! Did you know that guy? He came out of nowhere!” And I was like, “Nope, I don’t even know what he looks like. I couldn’t tell you at all. I just saw his fist.” Then I asked, “Am I crazy or did he say ‘That was because you look exactly like Shia LaBeouf?'” And the couple was like, “Nope, that’s exactly what he said.” And we were all very confused. He ran away and nobody found him, but they described him as like a 6-foot, 6-foot-3 muscular white frat boy.

That's a rough thing to go through.

I’m a pretty little guy—5-feet-7—so that’s probably why that stuff made my Facebook insane.

How do people normally respond when they tell you that you look like Shia?

For a while, people have said that to me, and usually, it’s a good thing. They don’t usually hit me. But I’m always just like, “Ah, thanks!” because I think he’s pretty cute. I’m like, alright; that’s a good compliment.

Are you very familiar with Shia, as a person?

Yeah, I know his stuff. He’s kind of crazy.

What do you think it is about him that would have incited this man to punch you, just for looking like him?

Well, maybe it's his performance art they don’t like, or I think he’s punched a couple people before, possibly stole a girlfriend. I don’t know! It could be so many things he’s done. I hear he’s not the nicest person, but who knows? That could all be a rumor.

Well, I hope that he hated Shia LaBeouf, because if he liked him, I don’t know why he would’ve punched me that hard. It’s not really hard to say hi.

How did this story get to the place where it went viral?

My friend jokingly sent it into Gothamist, and it just went all over the Internet. It was just like, "Oh, it’s here and here and here," and then I was like,"Wait, number one trending on Facebook? This is weird."

Shia called you and left you a voicemail. What did it say?

He said that he felt super bad for me and wanted to bring me soup. He also said to call him back so we can talk.

And when you called him back, what was the conversation like?

He was super, super nice, and just felt really bad for me. He said when he's back in New York he wants to take me out for a drink.

What do you think you'll talk about over that drink and soup?

Hopefully, we'll giggle about it, talk about how in insane it was, and take a selfie so we can share it with the WORLD.