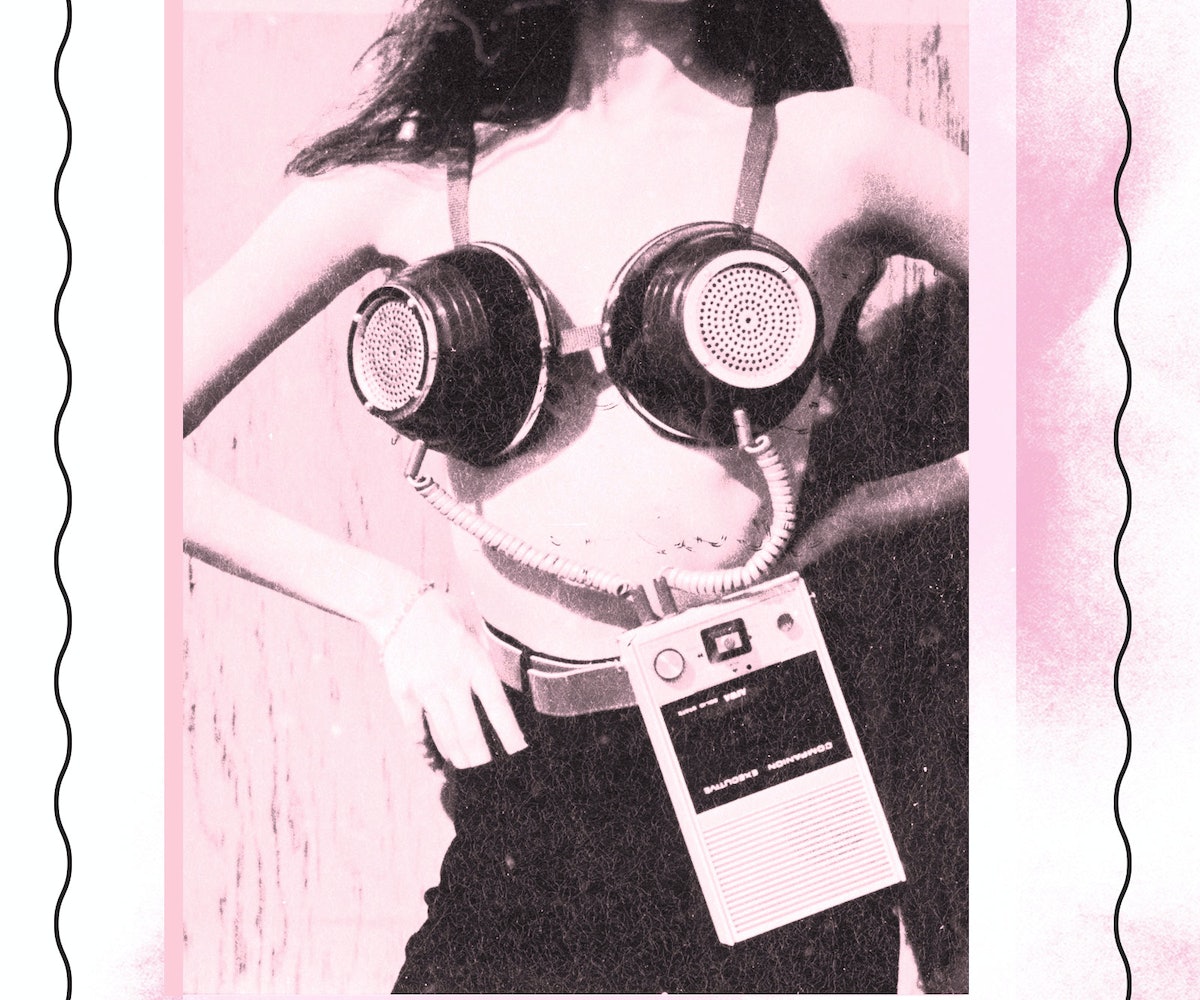 Think about how much time we as women dedicate to finding the perfect shoe or highlighter or even couch. Now, think about the amount of time we spend trying to find “the one” in bra form. It probably pales in comparison, right? It shouldn’t. Bras are the one piece of clothing in our wardrobe arsenal that get the most wear and, as such, should be getting the most attention.

There’s a reason why most women are so excited to take off their bras at the end of the day (aside from tossing off tools of the patriarchy). Usually, it’s because they’re wildly uncomfortable, which is typically a sign that you’re wearing the wrong size or fit. In fact, 80 percent of women wear the wrong bra size. But we’re here to help you be part of that 20 percent minority.

Bra shopping is like shopping for jeans. Nobody really wants to do it and it takes all day, but it’s necessary. To help you navigate your way around bra shopping, care, and general practices, we enlisted the help of stylist Micaela Erlanger, ambassador and spokesperson for Maidenform, and Michelle Lam, founder of True & Co. We all deserve to live in a world where taking off your bra isn’t the first thing you want to do when you walk through your front door.

This should seem obvious, but you’d be surprised by how many women have never had their bra properly fitted and are walking around with the wrong size as you read this. Not only is this just silly, but you’re doing your body and your breasts a disservice in the process.

So, next department store you walk into (or just go out of your way to walk into a department store because, we know, who shops at department stores anymore), saunter over to the lingerie section and get your boobs measured. It will make a world of a difference. This is also a service you can find at any lingerie shop, from big chains like Victoria's Secret to smaller boutique shops, like New York City's La Petite Coquette. Definitely seek out a professional, though, and don’t try to do it yourself, says Lam. “For you to measure yourself is almost impossible,” she tells us. “It's kind of like waxing; you do need a partner to do it right.”

You’ve gotten professionally sized, go you! More than likely, you were given a number that was completely off-base to what you assumed your size was (been there, done that). Now that you have your measurements, it’s also important to keep in mind that a generic bra size isn’t necessarily going to determine what looks best on you. “In the case of True and Co., we believe you can't use just two dimensions—band and cup size—to describe the most three-dimensional part of a woman's body,” Lam tells us. “Everyone is so nuanced and individualized and unique… Make sure that whoever is consulting with you on your bra understands your preferences and make sure they really focus on the current shape of your body and shape of your breast and what's going to work for you.”

So, while having your measurements is great, there are other factors to take into account. True & Co offers up a quiz on its website—which asks wearers everything from what your shape is (well-rounded, bottom happy, splayed, etc.) to what you prefer lining-wise and even whether one boob is bigger than the other—to help women get a better feel for what bra type is best for them.

It's important to keep in mind that each manufacturer is going to be different and each bra is going to fit differently, which is why...

Patience is not just a virtue, but a necessity

In the case of bras, especially, tags ain’t nothing but a number (and some letters). What might read as 36DD might fit like a 34B. “Sometimes it does take two hours of trial and error,” Lam says. “Most women give up after five or six bras but, hey, you're already there, so make sure that you keep trying or ask for a fit consult and demand that people treat you as an individual.”

You might not find your favorite on the first try. Heck, you probably won’t even on the third, but it’s important to not get exasperated and buy the first one you think, probably, most likely fits. Because then, you’ll just end up going through the process again a lot sooner than you need or want to.

The trying on process, aka the bane of most women’s existence, involves a few things. One includes bringing multiple sizes into the dressing room with you, along with multiple styles. What doesn’t immediately jump out on the rack may just end up coming home with you. You won’t know until you try it out.

Second, did you know that there’s a certain way you’re supposed to put on your bra? Well, there is. And it involves bending forward and pulling your boobs into the cups, along with other steps, which you can watch here. Once you’ve mastered the process, critique the shit out of the bra you’re trying on. The straps should be tight but comfortable, the band should sit straight across your back, and you should be able to clasp either the middle or loosest clasp without it completely suffocating you. Never try on a bra on the tightest clasp, says Erlanger. “As the elastic gives over time, you get more longevity out of your underwear… So, as your bra wears, you go tighter.”

Some tell-tale signs that the bra you’re trying on is too small or big? “If you bend over and there is gapping between the chest and the cup, your bra is too big. If you have any spillage, if you have double-boob, or if you have a little back fat or whatever, your bra is too small,” Erlanger says. “You need to find a bra that is smooth, and supportive, and secure—it shouldn't be uncomfortable.”

Patience, sensei. True love takes time but is ultimately worth the wait.

“Most women have about 20 to 30 bras in their drawers, but they really only wear about four or five,” Lam tells us. Which speaks to a larger problem; don’t jump at a bra just because it looks appealing on a model. If you have no need for a push-up bra, don’t get one. If you’re a size D or larger, chances are bralettes aren’t going to be the best choice for you. Be open-minded, but also be practical and know what you want. If you find a style you love, it’s totally fine to get it in multiple colors. In fact, you probably should.

For Erlanger, she keeps a pretty lace one around, a T-shirt one in black and in nude, a strapless in black and in nude, and a push-up. Your essentials might vary, but, according to Lam, women should own around seven bras. “If you think about the number of shoes that most women have versus the number of bras, and you think about how most women are wearing and sweating in bras for close to 20 hours every single day, the five-plus-two formula definitely makes sense," she says. "Which is to have a bra for every day of the week and then your special go-tos for the weekend and, say, your comfortable, easy fit, no-wire for Sunday afternoon.”

The better care you give your bras, the less often you'll have to go out and endure the long-winded process of buying a new one. First things first, Lam says, you should never wear a bra more than two days in a row, which I’m sure most women are guilty of doing (this one included). It doesn’t give the bra a chance to recover, she explains. Next step is to, of course, clean it. Lam tells us that most American women don’t wash theirs—perhaps due to the antiquated idea that handwashing is the only option. Or, you know, laziness. “Let's be realistic here, you can put it in the washing machine, because who hand washes things these days? You put it into a pillowcase, and you really want to prevent the hook and wire from tangling together,” she says.

You also don’t have to wash it as often as you might think. “You don't have to wash it after every single wear, as long as you're not wearing it consecutive days in a row. It depends on how much sweat you produce, but you can wear it two to four times—It's kind of like denim. Machine wash cold, make sure you don't put it in the dryer, and it's going to feel fresh when you wear it again,” Lam adds.

Realistically, you should be getting fitted every six months to a year. Your bra sizes change depending on your hormones, age, weight gain, having a baby, etc. Your bras should also be replaced within the same time frame. Of course, there are some factors to take into account, like how well you care for it, how often you wear it, but also your bra size, says Lam. “If you are an A cup and you don't sweat a lot, you're not going to be testing that Spandex the same way a DD woman would,” she says. “It also depends on the density of your breasts. If you have very heavy, dense breasts, you are going to want to replace your bras sooner rather than later—you might have to replace it every four months, depending on the weight of your breasts… If you're smaller, you can get away with a year, a year and a half.”

Some signs that it’s time for a visit to the store include: if the band starts to ride up your back or is too loose, your straps don’t get tight anymore, the underwire doesn’t rest against your skin or pops out, the cups are too large, it’s downright uncomfortable, and if it looks like it's gone through the ringer and back again.

Bra shopping doesn’t have to be a chore. And taking into account all that we’ve outlined, hopefully, it won’t be from here on out.

Lam says she wants women to start taking pleasure in lingerie shopping; to think of bras as enjoyable, rather than something they have to wear. “Lingerie is gorgeous, it's pretty. And if you find a bra that actually works for your body, you really start to have fun with the category—it's even more fun than shoes,” she says. Although, editor's note: debatable. “I think that women should think of bras as part of your wardrobe and part of your costume as you approach every day. It’s one more fun thing that you can add to your outfit. As opposed to saying, 'I'm just going to buy one type of bra and one type of bra only,' while, meanwhile, everything else in your wardrobe is creative and fun and amazing.”

Diversity can be fun and cute! Now, go give your boobies the love and care that they deserve.