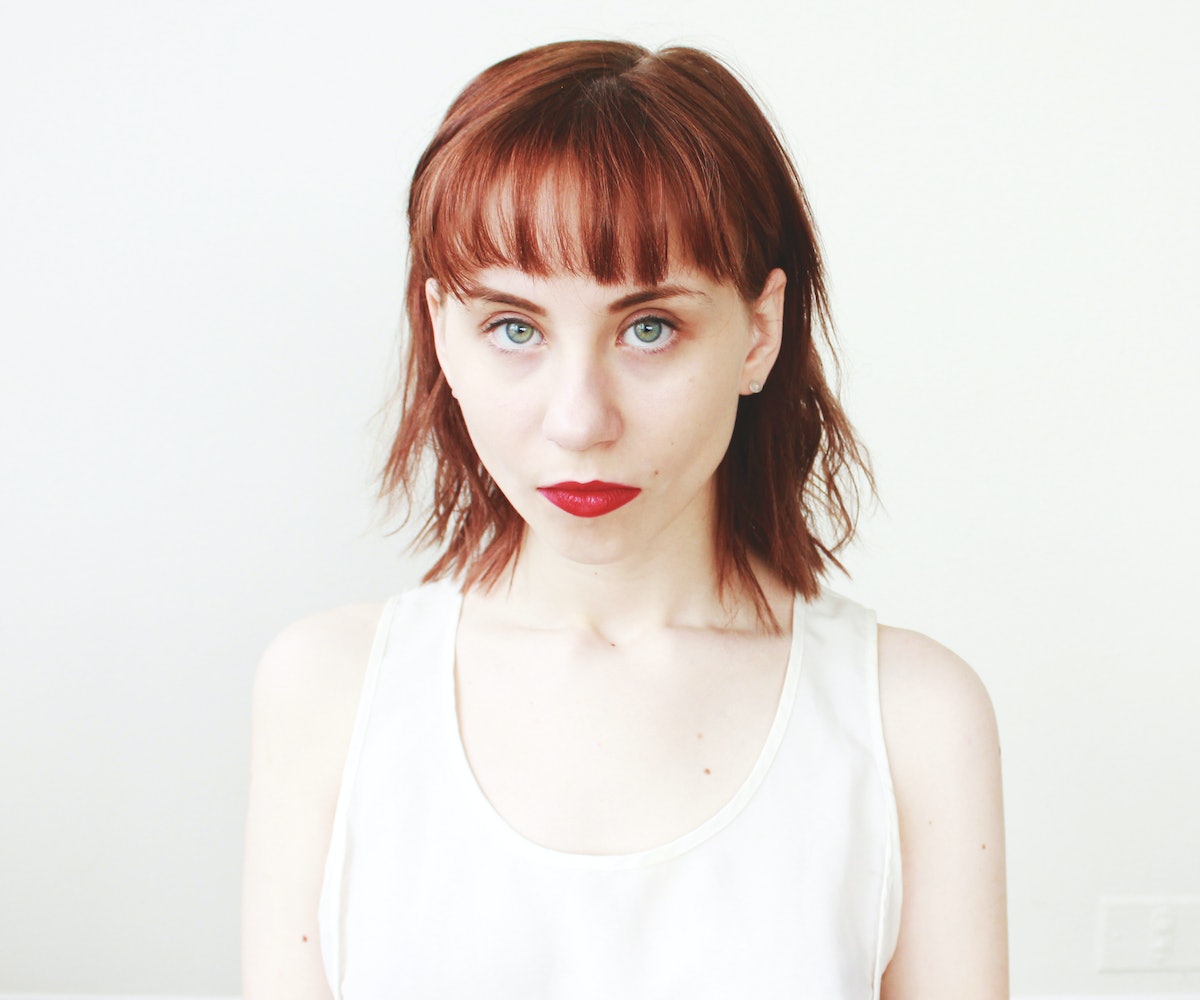 Meet Alexandria Maniak, who makes music under the name Shortly. Upon first listening to her EP Richmond, released today, I was immediately hit with a sense of familiarity. Not because it was something that I had heard before, but because it was as if I was finally hearing myself, and my own experience. And there was no struggle—no working to pretend like I liked something because some shitty boyfriend told me it was "good." There was no pretension here, and no shitty boyfriends.

Maniak tells me that she experienced a similar frustration, both as a music lover and eventually when creating her own sound. “There was a big part of me growing up,” she explains, “when I wanted to write music that meant something to me; I actually said out loud to my friends a couple of times in high school that, ‘I would be able to pull off this song if I was a guy.’”

Maniak brought up her annoyance with the tired line of questioning she’s received (and countless other female musicians have received) in the past, when she’s asked what it’s like, being a musician and also a woman. “I’m a woman in music, and it doesn’t matter,” Maniak declares without prompt, adding that people have related her to Julien Baker in live shows. “We’re nothing alike sonically, you just think that because we both play the guitar. I really appreciate the compliment because I love her, but acknowledge that this is something that you’re kind of generalizing.”

She refers to her hometown as “almost a suburban industrial wasteland, but not quite there,” a place called Southgate just outside Detroit. Though Maniak grew up in a home deeply rooted in music—her mother, a classical guitarist with a penchant for music ranging from Madonna to Shania Twain and Simon & Garfunkel; her father, a fan of Guns ‘N Roses and Aerosmith—she noted the general consensus on music in Southgate was unlike her own, referring to the two types of people as “Soundcloud rap and then there’s Sonic Youth people with the Dr. Martens.”

Like many who find themselves in a Warped Tour-esque scene in high school, the definition between punk and emo and whatever the hell else can take a while to develop. Maniak recalls listening to Punk Goes Pop and being interested in Sleeping with Sirens for their angst, but ultimately realizing, Wait, I don’t think I like this.

What did she like? Maniak recalls, "My mom drove me to, I think it was a Title Fight show when I was 16, and she was like ‘Is this the band that you're listening to? You don't like this kind of music, do you?’ And I was like, ‘I think I do.’ I was kind of like a little bit sheltered so it was like super exciting for me, when I got asked to, like, play in a band and play a real instrument."

She had started performing when she was seven years old in theatre, moving onto modeling when she was 12, but “was not very enthused by that,” so she moved onto writing indie pop music (but wasn’t connecting with that either). “I decided to join bands because I wanted to play rock music, which my parents were not very into. I felt really tokenized by those bands. I didn't really feel like I was playing music that I liked, I wasn't really heard out.” It’s in that experience of alienation that she found her footing as a solo artist in July 2016, quite literally taking the stage “as Alex from so-and-so band,” at a backyard concert and announcing, “I go by Shortly now,” and began playing her own music. From there, it took off. “Pretty immediately I recorded “Matthew,” the first single, and released that within a month of having the project started.”

The meaning behind the pseudonym Shortly is multi-faceted. In her music, the tracks she’s written under the name are “a little bit more jumpy” compared to the sad music she produced under her given name, though they are still infused with the same mournful lyricism. A second meaning to the name comes from the feeling of anticipation and anxiety in waiting to reveal her creative work to people. Maniak says, "I had a boyfriend for two years that I never played any of my music for, who I was in a band with and played other music with, but I was just so ashamed of the music that I wrote, and so afraid to show him. And I always told him, 'I'll show you shortly, I'll show you shortly.' And it was just, this thing that I said, [but] I didn't want to name it like, Impending Doom or, Waiting. So I chose Shortly, because it was kind of this somber feeling of waiting. It's just kind of always in the in-between, and I really resonated with the word."

Maniak laughs, adding, “I was [also] really tired of being in bands that started with ‘The.’”

Pretty soon, Maniak had built her DIY scene around her, so to speak, realizing the support she had as she vented about her discomfort with a situation and received unwavering encouragement from all sides. “I was like, ‘You know, I just really don't feel comfortable,’ and they're like, "You don't have to do that," and I think that moment is when I understood that there was a scene of people around me, because I saw them, in front of me.”

Similarly, her music as Shortly is a collaborative venture, as she has plenty of friends to bounce ideas off of as they come pouring out of her. “I write the songs alone. I write a bunch of songs, I write poetry, and I journal intensively every day. I find my inspiration in that," she explains. “I'll kind of go back and see if I said things that I still resonate with and the songs will come from there. You'll see I have very fast thoughts, so none of it really makes sense until I go back and think about what I said.”

On her first collection of songs, Richmond, she collaborated with Joe Reinhart of Hop Along, who was recommended to her by Fred Feldman of Triple Crown Records after receiving rave reviews from Foxing’s Conor Murphy. “[He] came back to Fred and was like, “I never want to work with anyone else,” after producing the band’s 2018l album Nearer My God. Upon the recommendation, Maniak explained, “He and I got on the phone and then we realized that we're actually just very similar as human beings, and kind of laughed a lot, and I felt a very natural connection with him.”

And the resulting EP was five songs that sounded “they way they sounded in my head,” Maniak said. Richmond, out today, includes two previously released tracks, “Finders Keepers” and “Spare Time,” as well as three new songs. “Anyone Else,” the third track on the EP, was inspired by a relationship in which Maniak found herself trapped. Raised Catholic, but now “more Buddhist and atheist,” the relationship was in no way spiritually cohesive. “His dad worked for the church, and he made me take communion, basically, and as somebody who used to follow it, I felt kind of this strange feeling of like, ‘Does this person love me for having me do this to please their father? Would he be happy if I was doing this thing even though it’s for a false god?’”

The fourth track, “Two,” is about codependency, and how to achieve self-awareness about it and learn from it. “I realized that I was relying so much on the people around me that it was impacting my physical and mental health,” Maniak explains, “and I didn't feel valid unless people reminded me constantly that they loved me and they trusted me and they like the things that I was doing.”

She continues, "I've been diagnosed with bipolar disorder since, and that song was written before I knew that I had that diagnosis, and it's about having two different people inside of me: someone that really wants the best for the people around me and somebody who just kind of is evil and just wants to suck the life and emotional energy out of the people around me to feel better… It's kind of about realizing that you can't always just sit there and wait for someone to come to you."

The final track, “Wall Around The Subject,” is Maniak’s way of breaching the topic of PC and call-out culture. As a victim of assault, she was uncomfortable seeing people claim others’ experiences as their reasoning from cutting ties to someone, and seeing every situation in black and white. She says, “I was seeing people who haven't really been through it say things like, 'If you are even in any way associated with this person, you're banned from this chat,' and kind of just sharing screenshots that weren't theirs and just really kind of wearing these victims' names as a cape. And I thought to myself, like, I have these situations in my past, and I don't like thinking about them, but I sure as hell wouldn't want people to banish this person. And I was like, I can talk about anyone, about this person, but if people in this community started throwing his name around left and right, I wouldn't feel safe anymore.”

Listen to Richmond, below, released today via Triple Crown Records.