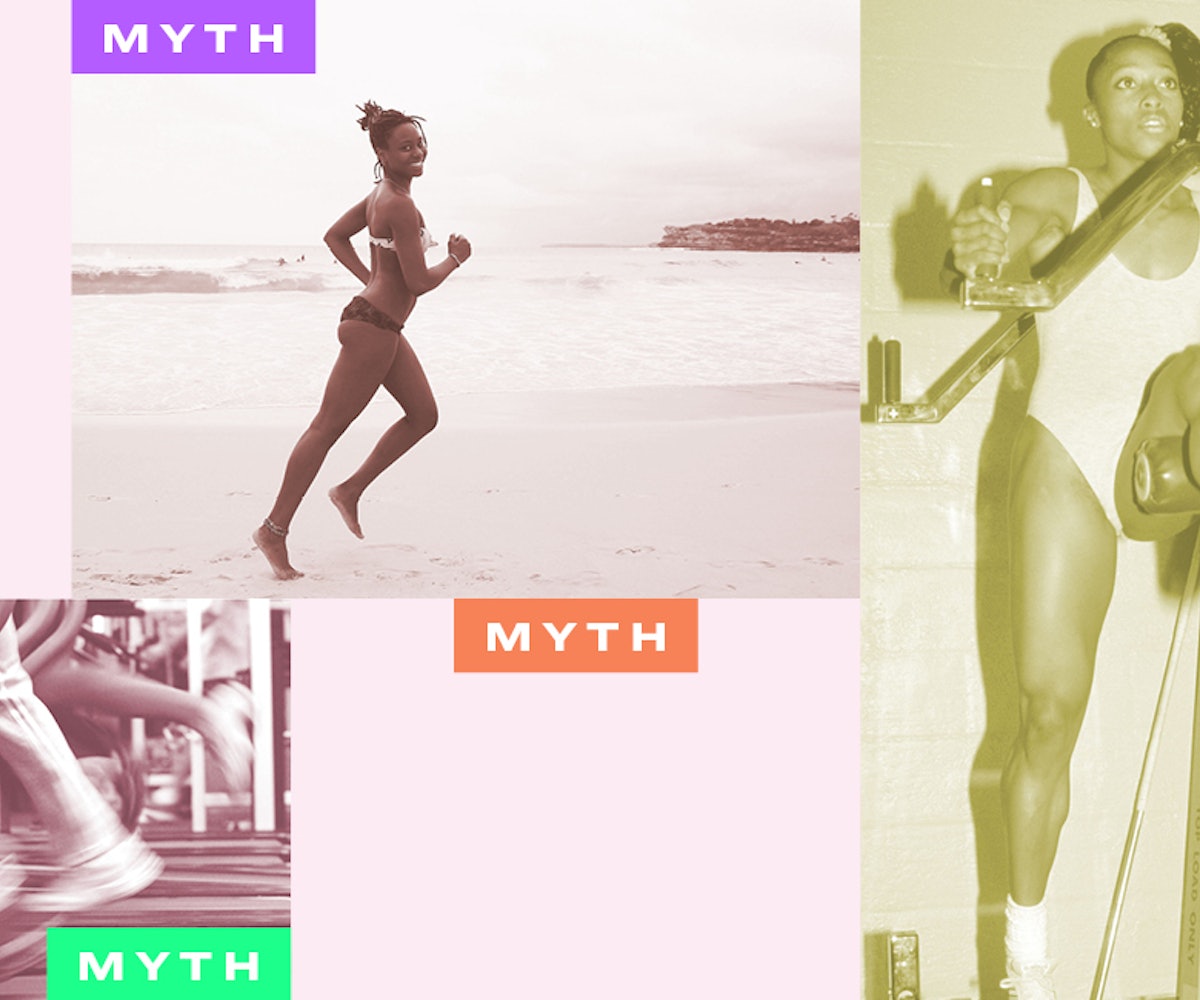 When it comes to working out and training, there are still dozens of myths—some that are patently ridiculous, some that seem pretty darn reasonable—swirling around gyms, yoga studios, and run clubs. And, admittedly, with research that seems to change every single year, what was true in 2015 could be completely disproven by now. But there are a few downright untrue—and actually potentially harmful—myths that just won’t quit. So, let’s stop perpetuating these and get healthy.

The general consensus among doctors and trainers that I’ve interviewed over the year is the "chin up" test. If it’s a head cold, go ahead and train. If your throat is scratchy and you’re hacking up phlegm, skip it. But the "I have a cold" excuse can often be exactly that: an excuse. Rather than skipping your workout because you have the sniffles, do the first five minutes as planned. Once you’re warmed up, reassess. You might feel a lot better—sometimes, moving can help clear out your sinuses and perk you up. If you feel just okay, dial your plan for a run back to a walk, or cancel your strength workout and do some gentle yoga instead. If you really feel like crap, go home and get some rest.

Seriously, this is the myth that won’t die. No matter how many times it’s debunked, it still terrifies the masses—even those of us who intellectually know better struggle with this one. Lifting weights helps us torch fat, improves our metabolisms, helps guard us against muscle loss and osteoporosis as we age, and frankly, gives us some sexy-ass muscle tone. It’s actually crazy hard to bulk up; women’s hormones generally will work against packing on a ton of poundage from the weight room. So lift heavy, lift light—whatever you do, make sure some amount of strength training is included in your day.

“If I do enough ab work, that six-pack will show up.”

Sorry, ladies. Spot-training has been disproven time and time again. While crunches and ab work might help if you’re already 99 percent of the way to a six-pack, the only way to make it to that point is with good all-around exercise, plus a seriously dialed diet. Don’t trust any workout or trainer that promises a six-pack by just focusing on your stomach muscles. And—bad news—some body types will never end up with a six-pack, so don’t be surprised if it doesn’t appear no matter how hard you try.

“If I exercise today, I can eat XYZ pieces of cake”

Sadly, exercise should never be an excuse to overindulge. You may have burned off the equivalent calories to that cheesecake, but you shouldn’t be thinking of exercise as your eat-anything pass. That just creates an unhealthy mindset toward working out, and toward food really. Rather, you should be trying to fuel your body with healthy choices to support your workouts! (That said, have the damn cake. There’s nothing wrong with dessert on occasion, just don’t rationalize your sweet tooth with bouts of exercise.)

“I feel sore, so I should take today off.”

D.O.M.S.—delayed onset muscle soreness—is a real thing… but it isn’t cured by a day of couch potato-ing it. That’s just going to set you back. Instead, plan for a less-intense day after any kind of hard workout. Think: yoga, swimming, a light run, or a long walk. Getting your blood flowing will actually help decrease stiffness and soreness, and boost the benefits of that strength session. But if you find yourself pretty much incapable of even rolling out of bed, that’s a sign that you’re lifting too heavy.

This one has made its way onto gym walls and motivational posters all over the world. And it is The Worst. Sure, a high-intensity workout can be fantastic and leave you a little sore the next day. That’s fine. But if every single workout is leaving you flattened, sore, in tears, blistered, or completely cracked, you’re doing more harm than good. You can absolutely make serious gains without pain—just look at some of the gorgeous yoga instructors and practitioners out there. And you’re a lot more likely to consistently work out if you’re not miserable every time you hit the gym.

“I’m tired, so I should nap instead.”

Similar to the "I have a cold" myth, this one can be a poor excuse, or a reason for some introspection. If you’re always feeling tired, it’s time to: (a) reconsider your sleep habits or (b) talk to your doctor. If you just had one late night and are feeling exhausted, start with that first five minutes and reassess after that. Maybe a hard workout is what you need to energize yourself, or maybe a long walk instead of a hard run makes more sense. If you’re feeling like you could keel over and nap under the elliptical after five minutes, though, shut it down for the day and go take that nap.

“If I don’t have an hour, I might as well skip exercise.”

Even five minutes can make a difference over time, and will absolutely make you feel better. Even 60 seconds of planks can help work your core, and sneaking in a 15-minute walk during a conference call will help get your blood flowing. Seriously. Just do something.