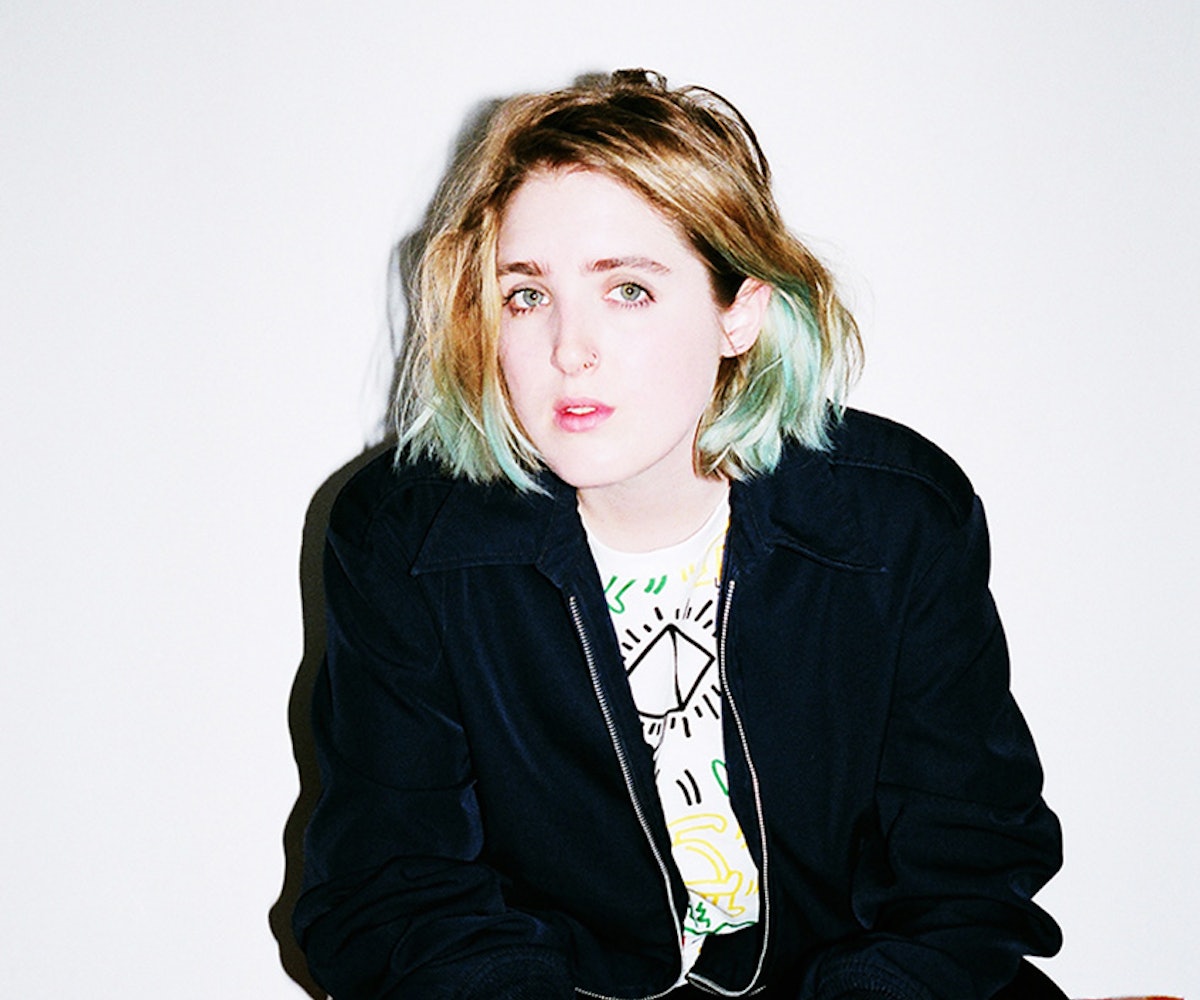 “The craziest thing just happened,” Shura says over Skype. “I had two contact requests, and I just called a totally random person who added me on here. I thought it was you!”

Making the day of an unsuspecting fan by way of an accidental phone call is definitely something Shura, AKA Alexsandra Denton, would do. Talking with her is like hanging out with a good friend that you’ve had since elementary school—she’s energetic, insanely friendly, and tells the best stories.

With just three singles released in 2014, Shura is quickly becoming known for her unmistakable sound. Blending '90s R&B and '80s pop, her hybrid new-wave tracks are reminiscent of influences like Madonna, Prince, and Janet Jackson. Shura writes about heartache and longing but tinges them with positivity. “A lot of people think you shouldn’t be nostalgic about the good things because then you can’t move on, but I think it’s really beautiful to look back on the past,” she says. Transitioning from her early days of acoustic songwriting into a more synth-based form of music-making—a move she attributes to her brother who was a drum and bass DJ—Shura easily mixes modern production into her throwback anthems.

Shura started mixing in her teenage years, and taught herself how to produce music in her makeshift bedroom recording studio. “You can learn anything on YouTube these days!” she says. She went on to direct and edit the video for her single, Touch—a slow-motion dream sequence of couples kissing in clouds of colorful smoke—that has received over 7 million views. Her latest single "White Light," which you can steam below, is a nearly seven-minute epic that once again channels the '80s while somehow sounding up-to-the-millisecond modern. We caught up with her to talk about the trick behind making sad music danceable, what she likes writing about, and the best part of being a musician.

For people who aren’t familiar with Shura, tell us your backstory and journey into music. How did you get started?

Music was always playing in my home growing up. I'm a twin, so it was one of the easiest ways of keeping two tiny humans entertained and occupied. We had a piano and lots of guitars lying around, so when I hit puberty and wanted to be cool, I convinced my Dad to show me a few chords on an acoustic guitar and never really looked back. Working in a record store was also my first job, so I got to discover things that maybe weren't playing in my house growing up like Portishead and The Pixies.

What are you finding yourself most inspired by these days?

I'm hugely inspired by unusual production techniques. I love having the time to play around in the studio. Sometimes I'll try recording stuff with my cassette tape dictaphone and playing it back to create interesting textures. Other times, I'll explore different ways of mic-ing up drums to get awesome sounds. I became obsessed with synthesizers and can waste many hours just messing around with my Roland Space Echo. When I first started, I'd just record my demos using the mic on my laptop, but the more I learned, the more interested I became in technology and how to use it. I'm also hugely inspired by cinema, (especially science fiction) be it the general themes or color palettes. Something like 2001: A Space Odyssey is so rich and warm in color, and I love trying to create that feeling with synthesizers.

How does the songwriting process work for you? Do most lyrical ideas come from your own personal life and experiences?

I always write about personal experiences. I'd feel like a fraud if I didn't. It may not always be literal. "White Light" is a song about an alien; I've obviously never encountered an actual alien. It’s an exploration of being someone who feels disconnected from reality, or maybe being someone who feels they're an outsider trying to fit in. Sometimes what makes you an outsider to most people is actually a positive thing and is something that you should hold on to rather than bury. It’s a subject that I spend a lot of time thinking about and extrapolating.

Is songwriting an emotional outlet for you, or a way to get everything out in the open?

I don't see it as a way of getting things out in the open so much; it's more a way of releasing ownership of emotions or experiences. It could be that something was traumatic or difficult, but once you capture that and share it with people, it no longer belongs to you. Then it's interpreted and appropriated. In that way it’s an outlet, but maybe not in the most traditional sense of the word. It's not like screaming into a pillow—it's less immediate of a release than that.

How are you able to balance the emotion of your songs, while also turning them into tracks that really make you want to dance?

I love the dichotomy of music that sounds happy but lyrically, the content is sad. Whitney Houston is the absolute queen of that. I suppose that a lot of the music I grew up on also did that very well. For me as a listener, it's satisfying because it means that however you feel, when you're listening to a song, the feeling is amplified. If you're in a bad place and you listen to Whitney, it can nourish that sadness, which is an important process to go through. Then again if you're in a good place, you can have a great time and just vibe out. Maybe that's why I create music that straddles that. A lot of it just comes down to personality, too. On one level I'm a bit of a clown, and on the other I can spend a long time agonizing over things like life, death, and relationships. It kind of suits me that something can be both light and fun but incredibly moving, too.

What three words would your friends use to describe you?

Do you have a style icon?

What has been the most difficult song or topic to write about for you?

I think writing about family relationships, how weird life is, and how absurd death is are all way harder topics than a shitty breakup you went through. All of those are fun to explore, though.

What’s your favorite part of being a musician?

Being able to work in your pajamas.

What’s next for you? When can we start getting excited about an album release?

Hopefully towards the end of the year! The thing is, it has to be really good. So if it's not good yet, it's not coming out. I don't really see the point in putting out a record that sucks just to hit a deadline. That's definitely not the point. It's pretty much 100% or nothing. That’s the point of making music, right?