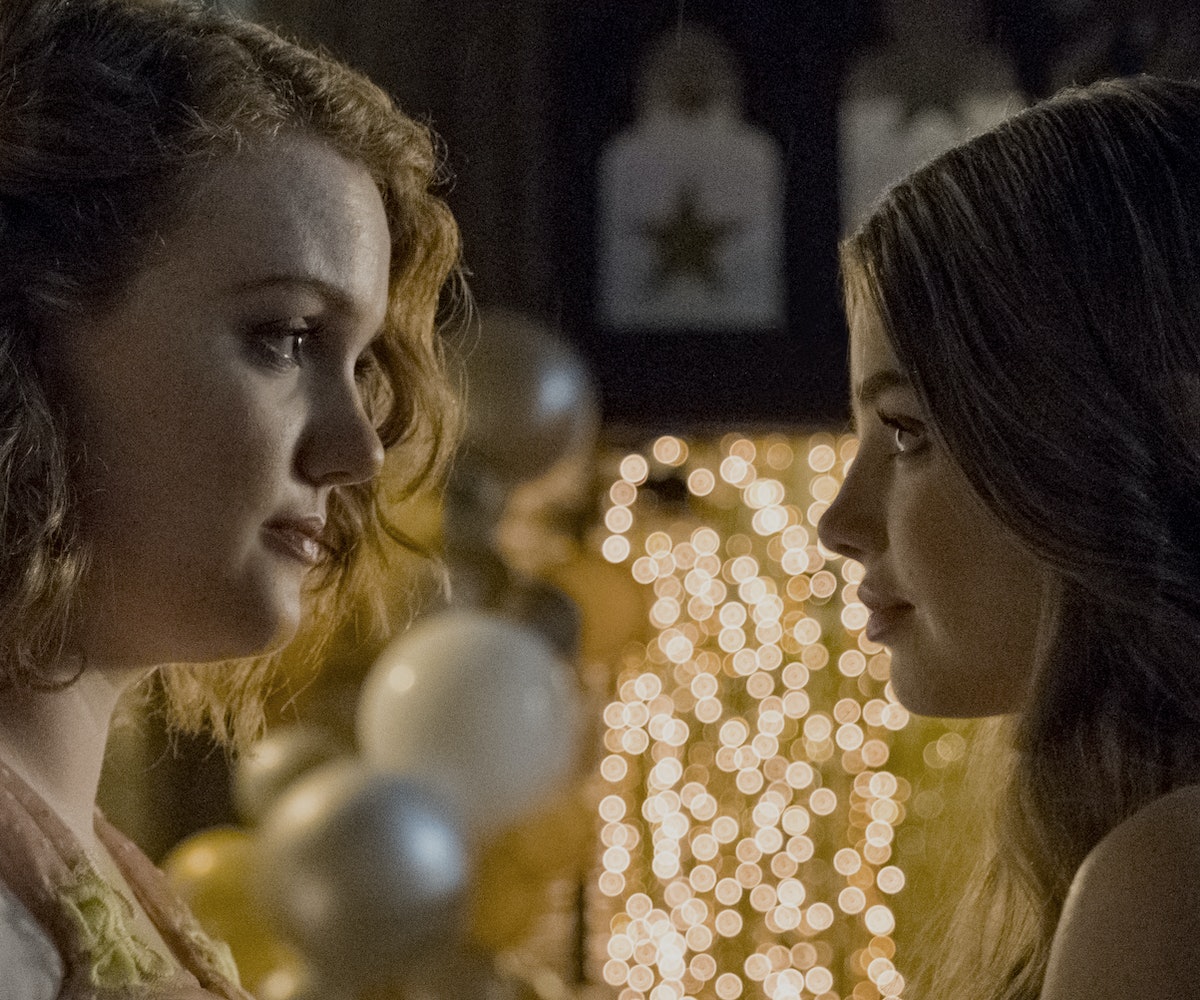 A contemporary take on the classic mistaken identity rom-com setup, Netflix's Sierra Burgess Is A Loser follows Shannon Purser's titular character as she gets sucked into the dark world of catfishing. A sweet, seemingly self-assured girl, Sierra soon finds herself at the center of an identity crisis after she begins masquerading as Veronica (Kristine Froseth)—a popular cheerleader and Sierra's longtime bully—in order to get close to her crush, swoon-worthy football player Jamey (Noah Centineo aka Peter Kavinsky).

Based on Edmond Rostand's 1897 play, Cyrano de Bergerac, Netflix's revamp of the story switches out handwritten letters for text messages and phone calls. But when things start heating up and require a more elaborate ruse, Sierra begins tutoring Veronica in exchange for her help. And though the girls end up striking up an unexpected bond, it's not long before things start unraveling for everyone involved.

Approaching the role as part actor, part sociologist, Purser is careful about the way she presents the premise of the film, which some could say glamorizes the damaging practice of catfishing. However, Purser is quick to argue that Sierra is held accountable for her actions, and that Sierra Burgess is less about malicious deception and more about how people handle the moments in which their lives spiral completely out of control. In fact, one could argue that the film performs its own kind of catfish, in the sense that those seeking a fluffy teen rom-com are instead treated to a story of self-love and the resilience of female friendship.

So ahead of the film's September 7 premiere, we spoke to Purser about the important moral underpinnings of the story, the ethics of catfishing, and how Sierra Burgess is flipping the traditional high school rom-com on its head. Read our Q&A with her, below.

What drew you to the production and Sierra in particular?

I think I loved that it was unlike any other teen movie I'd seen before. It definitely plays on that classic theme of mistaken identities, which is classic and iconic. But, I felt like there was a fresh spin on it. I really loved that it highlighted what it's like to grow up with social media and technology and how that's changed the way that we interact with each other. That just feels very timely to me. And Sierra, specifically, is such a fleshed-out character. There's much depth to her, and I really enjoyed getting to explore all of that and dig deep within my own life to find out how I related to her.

What did you want young women watching this film to take away from Sierra?

I think society is so hard on young women. Growing up, the images that I saw, the standards that I had to live up to in terms of how I looked and how I fit into my social groups—it was a lot of pressure. I really hope that people, especially young girls who watch the movie, feel seen and understood. But also know that it's so much more important to be authentic and yourself than to have a million followers on social media or get the attention of some guy. I think the best relationship you'll ever have is the one with yourself. That might even be the most important one. I hope that the movie encourages young people to live authentically.

What I really liked about the film was that it wasn’t necessarily about Sierra and Jamey. Like you said, it’s more about the relationship you have with yourself. And if anything, Veronica and Sierra’s relationship felt more important to the movie than Jamey.

Yeah, I really loved that. I loved that that was a lot more central to the movie than maybe people were anticipating. Love and romance are great and wonderful, but in high school, it can be very fleeting. Some of the best relationships I had in high school were not romantic—they were with my best girlfriends. And I think we don't really have enough healthy, empowering relationships between girls, especially young girls, on TV. Obviously, Sierra and Veronica have their struggle and don't always have such a perfect relationship, but in the end, they really sharpen each other and make each other better people. That's just very encouraging to me because I think everybody deserves a friendship like that.

We're kind of in this golden age of young adult rom-coms—look at To All The Boys I’ve Loved Before, Every Day, and Love, Simon. But for a while, it was the more dystopian and sci-fi-inspired teen films, like The Hunger Games, that racked up a lot of buzz. Why do you think that's the case?

To be perfectly frank, I think that's because our real world is looking a lot more like dystopia now. I think people need a little light and a little happiness in their lives. I think that's one of the great things about films and television from the '80s and '90s. Or like John Hughes' movies. They were very real and authentic, but they have that moral undertone—this idea that people are more than what they appear. I love that Sierra sort of hearkens back to that because I think teenagers aren't always looking for, like, explosions and hot guys with six-pack abs. Sometimes, they want depth, and they want truth, and something that they can learn from and relate to.

Not to sound like an old man yelling at a cloud, but technology obviously factors into the movie in a somewhat sinister way. How did you prep for a role that involves something as dark as catfishing? Did you watch a lot of Catfish the show?

I actually did for a while, but not really in preparation for the role. I find it fascinating. I really find human beings and [the rationale behind] why they make the decisions that they make fascinating. I guess I hope that this movie sort of reinforces the idea that there's a lot more to people than what they seem, because, on the surface, Sierra is this sweet, innocent, kind of nerdy girl. And, she ended up doing something that is wrong and a lot darker than what she intended. Obviously, she learns from her mistakes and becomes a better person because of what she's gone through. But that all comes from her insecurities. It comes from this feeling that, "Well who I am, as I am isn't good enough, so, I need to somebody else." Ultimately, she learns that her actions do have consequences and also that she was wrong. She has inherent value.

Why do you think that people love a catfish narrative? Catfish is maybe one of the most popular shows on TV right now.

I mean, people are just fascinated by other people, you know? I think we want to understand why people do the things that they do and why you would lie or hide about this. People want to get to the bottom of it. It's kind of a mystery, which people enjoy. But, in Sierra's case, she's not doing it to be malicious or to hurt anybody. She's just in love for the first time. And, this girl who had previously been very self-confident, starts realizing that there are parts of herself that she doesn't like and doesn't know how to reckon with. I think she feels the need to change herself. I hope that people will sympathize with that.

The film ends happily, but with something as prevalent in the real world as catfishing, a lot of times it’s not a game—like, people get hurt, swindled, harassed, and whatnot. I feel like some could make the argument that this movie may glorify catfishing in a way and send the message that there’s a reward for doing something that’s, objectively, very messed-up.

I really don't see it that way, but I understand... I think if Jamey had found out about what she had been up to and was like, "You know what. It's fine. We should be together, and I don't judge you for it," [that would’ve been an issue]. But there's certainly some anger there. There's definitely hurt, and I do feel that she's held accountable. Veronica tells her the ugliest thing about you isn’t your looks, it’s your insides, and in that moment Sierra is confronted with the fact that what she's done is really wrong—that there are consequences for her actions. As a result, for a while, she loses that relationship with Veronica, and Jamey is not interested in talking to her. But, I think the connection that Sierra and Jamey had—even though it came from false pretenses for part of the movie—is genuine because they did spend all of that time talking to each other and getting to know each other. Ultimately, he understood that she wasn't trying to ruin his life or tear him down. She was just insecure, and he was willing to see past that. I'm not saying that everybody should get together with somebody who catfishes them or that cat-fishers are innocent and they're not doing something wrong. It is a movie. But, in the end, Sierra I don't think is a bad person. She made a mistake, and she owns up to that mistake and I think is a changed woman by the end of the film.

Sierra Burgess Is A Loser premieres September 7 via Netflix.

NEXT UP
Life
Unfortunately, An Amber Heard & Johnny Depp Trial Movie Is Coming
Life
Paul Mescal Is A Single Dad In Emotional Aftersun Trailer
Life
A Studio Ghibli-Inspired Cookbook Is Coming To A Kitchen Near You
Life
Netflix Dropped A Sneak Peek Of Bridgerton Season 3