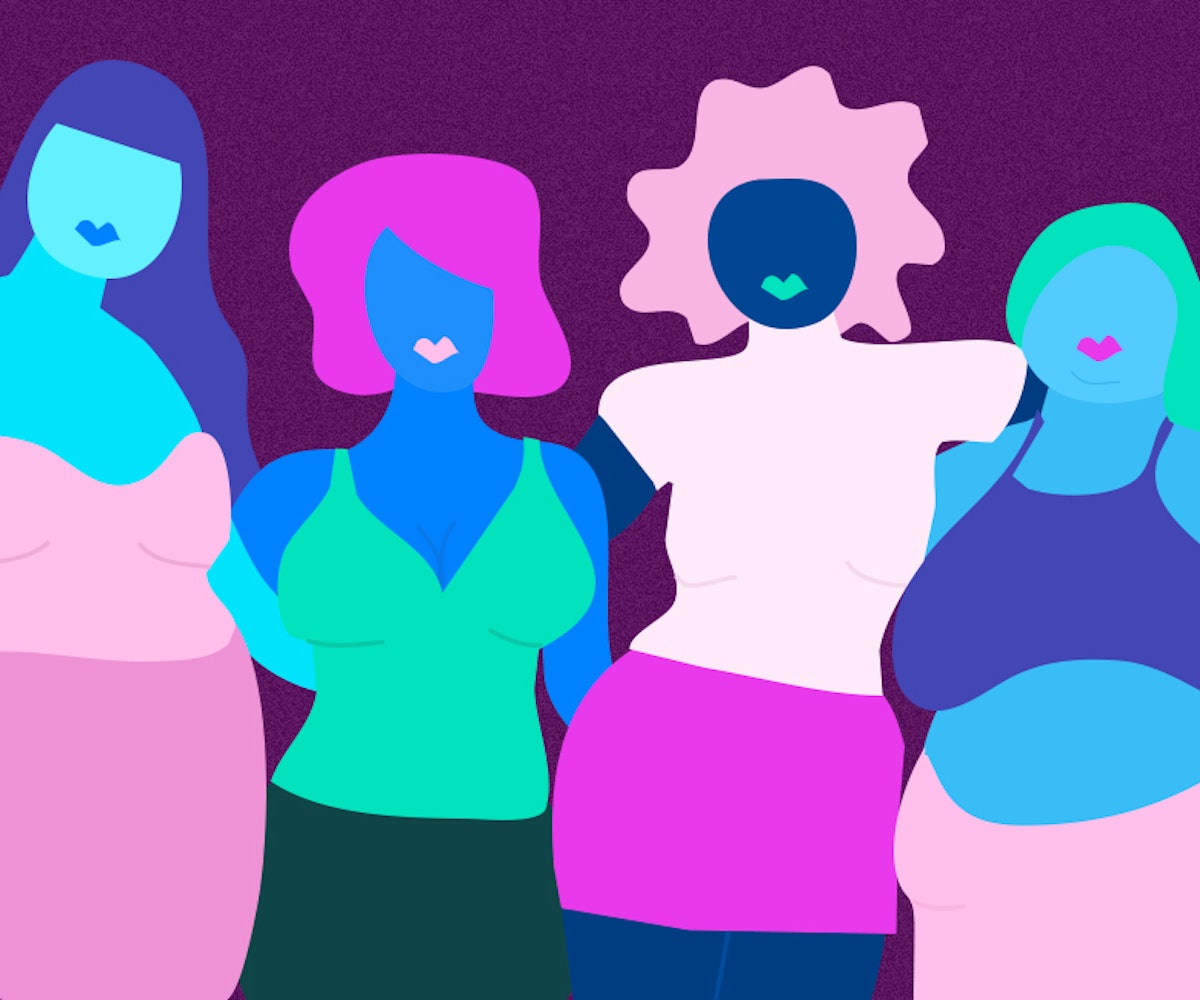 If you’ve looked at a fashion trend in the past five years or so and felt it radiating an overwhelming sense of hostility toward everything about you as a person, not only are you not too sensitive, but you’re exactly correct.

In 2014, normcore entered the popular lexicon—mom jeans and crewneck sweatshirts in tow—and you can draw a through line from there to the shape-abnegating parkas, high-necked floral dresses, and mammothly oversized sneakers of Demna Gvasalia’s current work at Vetements and Balenciaga. Tiny sunglasses, which make everyone look like they’re wearing a bad Matrix Halloween costume many years too late, are now inescapable, as are culottes, bucket hats, Birkenstocks, and fanny packs. In 2018, the fashion industry isn’t so much providing women with the aesthetic tools to go confidently out into the world as it is setting forth a challenge: Are you hot enough to prevail over a garment so heinous that it would make mere mortals look like total idiots?

The primary animating principle of fashion in 2018 is that, if you’re cool, clothes can’t simply be worn, they must be transcended. That the garments in question are ugly isn’t incidental to the phenomenon, nor is it simply a matter of taste. Ugliness is inherent to the idea, as are the notions of beauty it stands in opposition to. Normcore and its descendants all ask fashion consumers not to simply wear their garments, but to be the kind of person whose beauty transforms them into something aspirational. If you can’t do it, you’re a sister wife or a time traveler sent to Earth from one of the early seasons of Seinfeld. Which way this goes depends heavily on how well your body conforms to traditional standards of beauty, especially thinness. In fashion, even in 2018, thinness always matters most. The industry doesn’t believe—and has never believed—that how much you love yourself matters at all.

I got in a little trouble last week for pointing out that prairie dresses, currently an emerging trend in fashion-conscious circles, fit this dynamic pretty squarely. Twitter beef isn’t interesting, often not even to the people involved in it, but that’s what happened. The Cut had published an article by Lindsay Peoples that encouraged readers to try the look, including a range of pre-selected options that adhered to the prairie aesthetic with varying levels of fidelity. The article itself only bothered me insofar as it reminded me that prairie dresses exist, and that the purest distillation of the trend (long, waistless, high-necked, frilly, floral, maybe even puff-sleeved) seems designed to tell me that a person with my body is not welcome in the fashion industry. The more a garment is a true prairie dress, the more offensive it is to modern ideas of aesthetic taste, and at a size 20, I’m not the type of person who gets to feel affirmed for taking a fashion risk.

The story included a couple options that came in plus sizes, which I appreciated, but none of them were all that similar to the actual trend, probably because there were scant options for Peoples to choose from in plus sizes in the first place. Instead, they were short party dresses with nipped waists, but with high necks or bib ruffle details that hinted at the actual trend—a clear reminder that, if you already have the temerity to be fat, you shouldn’t attempt any further deviation from the beauty standard because you’re already challenging enough to look at, according to the fashion industry. In my initial comments on the trend, I said that only thin people get to be praised for dressing like jackasses. The Cut’s editor-in-chief, Stella Bugbee, took issue with me for asserting that it’s possible to dress like a jackass at all, which belies my real point: that purposeful ugliness has been the dominant idea in much of fashion for nearly half a decade, but only some people have cultural permission to stare into that particular abyss. Understanding that point is crucial to understanding why those trends exist in the first place.

When you live in a fat body, well-meaning people love to tell you that the only barrier between you and whatever you want to wear is your own self-confidence. That’s incorrect, but I understand why people say it—it’s convenient to believe that the only barriers for others are in their own heads, partly because it means fixing the problem might be simple, but also because it allows anyone who has never been plus size to neatly abdicate their complicity in how the world treats fat women and obscure the gap in their own empathy. In reality, there are two phases of choosing to do anything, including choosing what to wear: deciding there’s a thing you want to do, and deciding that doing it is an option reasonably available to you.

This is where the experience of living in a fat body deviates from that of someone who’s simply always been, like, 15 pounds away from being an Instagram influencer, or who experienced having a different body while pregnant; even if I decide I want to put a true, waist-free, ankle-length prairie dress on my size 20 body, I have to think about how much worse I’ll be treated by the people I encounter because I failed to conform to the harsh standards of ultra-femininity we impose on fat women, as well as whether anyone has even bothered to manufacture such a garment in my size. My own desires don’t tell the full story of the choices available to me.

Even if I decide the potential cruelty is worth it—people can react very badly to fat women who have the gall to present themselves in a way that isn’t as small as possible—the fashion industry may have already decided to materially exclude me before I had the opportunity to decide for myself. Beauty standards make everyone feel bad, but it’s disingenuous to pretend that the effects don’t increase in severity in a fairly linear way as your body cleaves further and further from the established, obedient norm. For fat women, wearing clothes that purposefully make us look larger in the same way that a thin woman would, can mean stereotypes about people like us—that we’re stupid, or lazy, or dirty—are magnified or easier to believe. Assumptions like that are how people get passed over for promotions, denied medical care, or closed out of social circles. They also, on a micro level, just get you treated like shit in everyday life.

Not only are these narrow expectations enforced socially, but they are enforced on a practical level, too. The majority of American women are plus size—a size 14 or above—but even on the mass market, most clothing lines top out at a 14 or 16. In the fashion-forward luxury spaces, that generally have their trends covered by cultural media, that’s lowered to a 10 or 12. The rah-rah girl power of wearing whatever you want and being unapologetically you doesn’t take into account the ways fashion excludes people based on their bodies, which go well beyond a couple quiet snickers at a fat girl in an ugly dress.

A big part of being a plus size person who works in fashion is wondering if anyone else will mention the elephant in the room, or bother to see the elephant in the room, or even acknowledge that elephants are real animals that exist in the world and not mythical beasts like unicorns and dragons, only found in the fictional accounts of people inclined toward flights of fancy. Do any of them believe me when I say my experience is different? Do they look at me, an otherwise delusionally confident person, and genuinely think all I want is a pity party, or to make them feel bad for being thin, when I explain what it’s like to live in my body in the world?

To a straight-size person, I’m sure this sounds histrionic, because hey, it’s just a dress or a pair of mom jeans, right? And, well, it is. For you. Fat women are playing a game with wildly different stakes. Five years ago, I lost a good bit of weight, putting me just below 200 lbs (the weight that Bugbee cites as the upper limit of her own experience) for the first time in my adult life. It was a strange experience in many ways, but the most heartbreaking part of it was realizing how much nicer people are to you in everyday life, the smaller you are. I wasn’t even close to thin by any popular beauty standard, but the difference was stark, even between being a larger plus size person and a smaller one. There is an entire industry dedicated to the aesthetics of the body and how we present ourselves to the world that doesn’t want to contend with these topics in a meaningful way, and how critical we are when we write about trends, their origins and what they mean is the perfect place to start changing that. But first, we have to be honest with ourselves about what’s really in fashion.