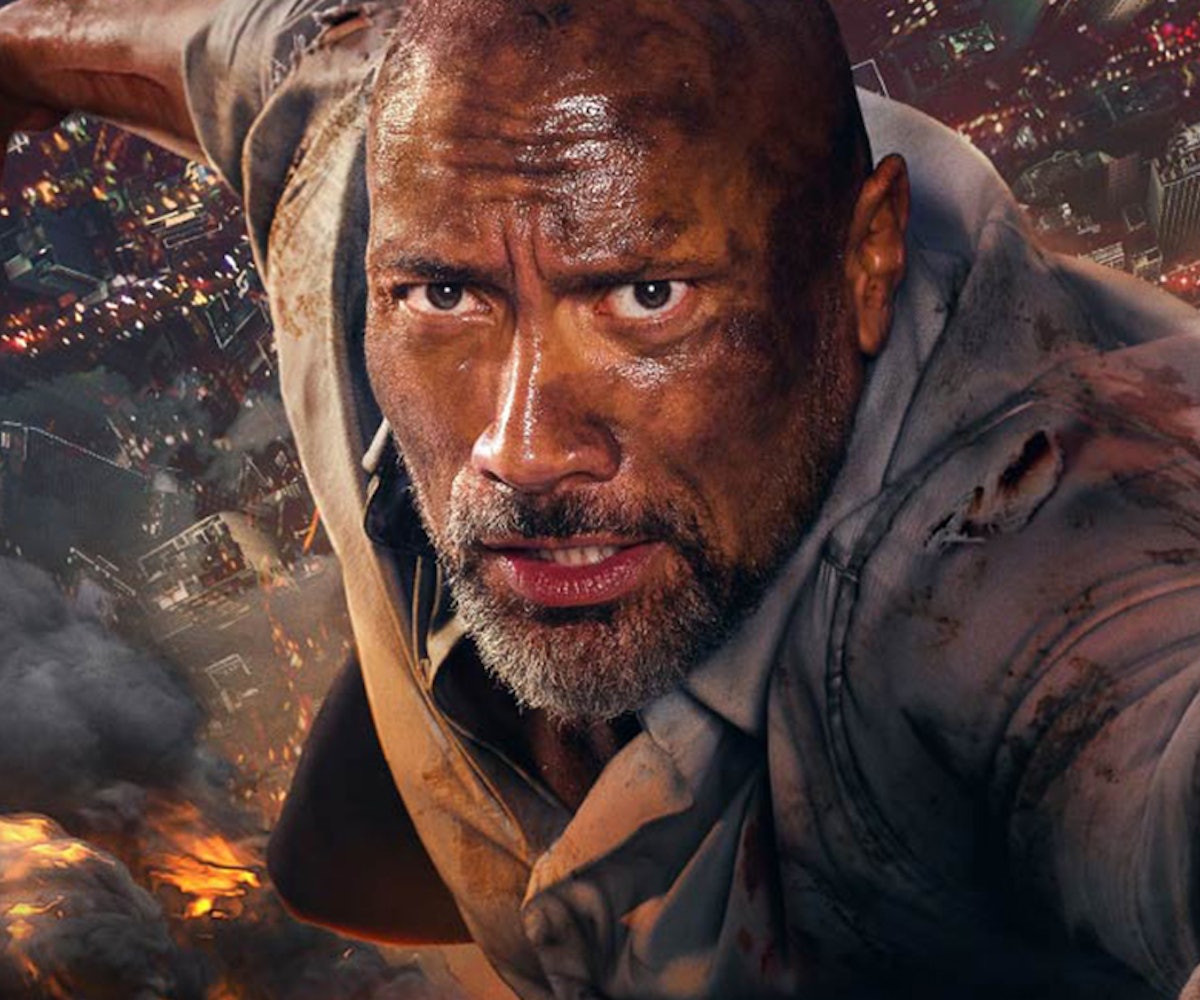 When Dwayne “The Rock” Johnson’s movie career really hit a stride about seven years ago, he quickly developed a reputation, memorialized in a Saturday Night Live monologue, as “franchise Viagra”—a movie star whose addition to sequels like The Fast and the Furious, Journey to the Center of the Earth, G.I. Joe, and, most recently, Jumanji could give those series some extra resilience. Johnson performed this trick enough times that even his “original” movies have this feel. Many of his recent movies resemble generically chintzy reiterations of brand names, promoted to the A-list with his help: San Andreas is a Roland Emmerich knockoff, while Rampage (despite its video game roots) is a poor man’s King Kong/Godzilla riff. His new movie Skyscraper similarly resurrects a ’90s go-to: This is Die Hard in a building, which is exactly what regular Die Hard was in the first place. But this is, like, a really, really big building.

There are plenty of reasons why Johnson is not quite right for a Die Hard variation in 2018; hell, the most recent Die Hard sequel suggests that Bruce Willis is no longer right for the job, either. But the one that Skyscraper accidentally hones in on has to do with vulnerability. The movie tries to give Johnson’s character, Will Sawyer, some dimension, or at least reason to believe he’s not necessarily a Rock-grade superhuman. Will is a former FBI agent haunted by a mistake that cost lives, now trying to make a living as a security consultant. He’s also an amputee, having lost one of his legs during his final FBI raid. When he’s brought in to assess the security of the newly constructed tallest building in the world, he’s not expecting to break back into the building to rescue his wife (Neve Campbell) and their two kids from a fire started by terrorists.

Of course, that’s exactly what happens, not unlike the way off-duty cop John McClane fights his way through an office building to save his semi-estranged wife after she’s taken hostage. (But, you know, bigger.) But in Die Hard, McClane’s fractured marriage adds texture to his crazy risk-taking, and some regular guy bona fides to his heroism. In Skyscraper, Sawyer’s family is a multi-part accessory. The movie avoids the now-hokey notion that the hero will prove his mettle as a family man by jumping through fiery hoops to save them, but leaves nothing interesting in its place. The fake movie kids seem like they’re there mostly because (a) they provide more endangerment opportunities than just one wife or kid and (b) Johnson has daughters of his own in real life.

This calculation may be why Johnson, engaging and charismatic as he is (and he is—few stars are so good at making junky movies watchable without much backup), doesn’t have a persona that feels as full or as human as his obvious antecedents like Tom Cruise or Will Smith. Maybe because he makes a fair number of family films (something Cruise or Smith haven’t done much of), Johnson’s characters tend to be heavily domesticated, even (or especially!) if they’re not actually married. This is treated as a cute joke in the Fast & Furious movies, where his super-agent Hobbs also coaches his daughter’s soccer team. But elsewhere in mid-period Rock, it’s just a given. In San Andreas, he also sets out to rescue his daughter. Even if he’s not specifically a family man, he tends to stay as celibate as a twelve-year-old boy: In Rampage, he shows pointedly little interest in the advances of a comely admirer.

Put together, these movies position their star as a sexless figure beyond reproach, with symbols of human trappings more than fully felt humanity—still more The Rock than Dwayne Johnson. Though it’s not fair to knock a movie for its marketing campaign, it does seem telling that the poster for Skyscraper prominently displays Johnson’s wedding-ringed finger, rather than, you know, his actual wife and kids. In the movie itself, Campbell has an obligatory moment of ass-kicking (spoiler: she fights the female baddie about who, within five minutes of her first appearance, you figure, “Oh, the Rock isn’t going to beat up a woman, so they’ll have his wife do it”), and her character handles herself well as a crisis. But not being The Rock, she doesn’t have a clearly expressed persona, so her capabilities feel like an extension of her husband. Yes, the movie wants you to think, our hero has chosen a worthy partner.

There’s nothing wrong with Johnson not making movies with fraught marriage subtext, or even with his seeming lack of interest in romantic comedy. Cruise and Smith didn’t exactly make their names on romances—though they have tried it, with relationship-based movies like Jerry Maguire and Hitch repping two of their biggest hits. Moreover, Cruise, whose Mission: Impossible building-jumping Skyscraper replicates without the gravity of genuine life-risking (and with the cheap move of audience reaction shots!), also has made movies that comment on his persona, while Smith doesn’t always play a cocky proto-superhero these days. Those are leaps that professional leaper and runner Johnson doesn’t seem so willing to make.

Skyscraper, like nearly any movie starring The Rock, is watchable, sometimes enjoyably stupid, and even occasionally well-crafted; writer-director Rawson Marshall Thurber does a decent job of building up to its big trailer-spoiled jumping stunt, adding on logistical complications in a way that does briefly recall the likes of Mission: Impossible. But given Thurber’s history as a slapdash comedy director (including Johnson’s own likably slapdash Central Intelligence), it’s hard not to picture his star coaching him through the whole ordeal: “You made Dodgeball, brother! You got this! The audience is gonna love it!” Skyscraper isn’t a very good movie, but it’s made with disarming confidence. Maybe Johnson doesn’t have any real on-screen relationships because he’s too busy psyching everyone up at once.

Skyscraper is out in theatres on June 13.