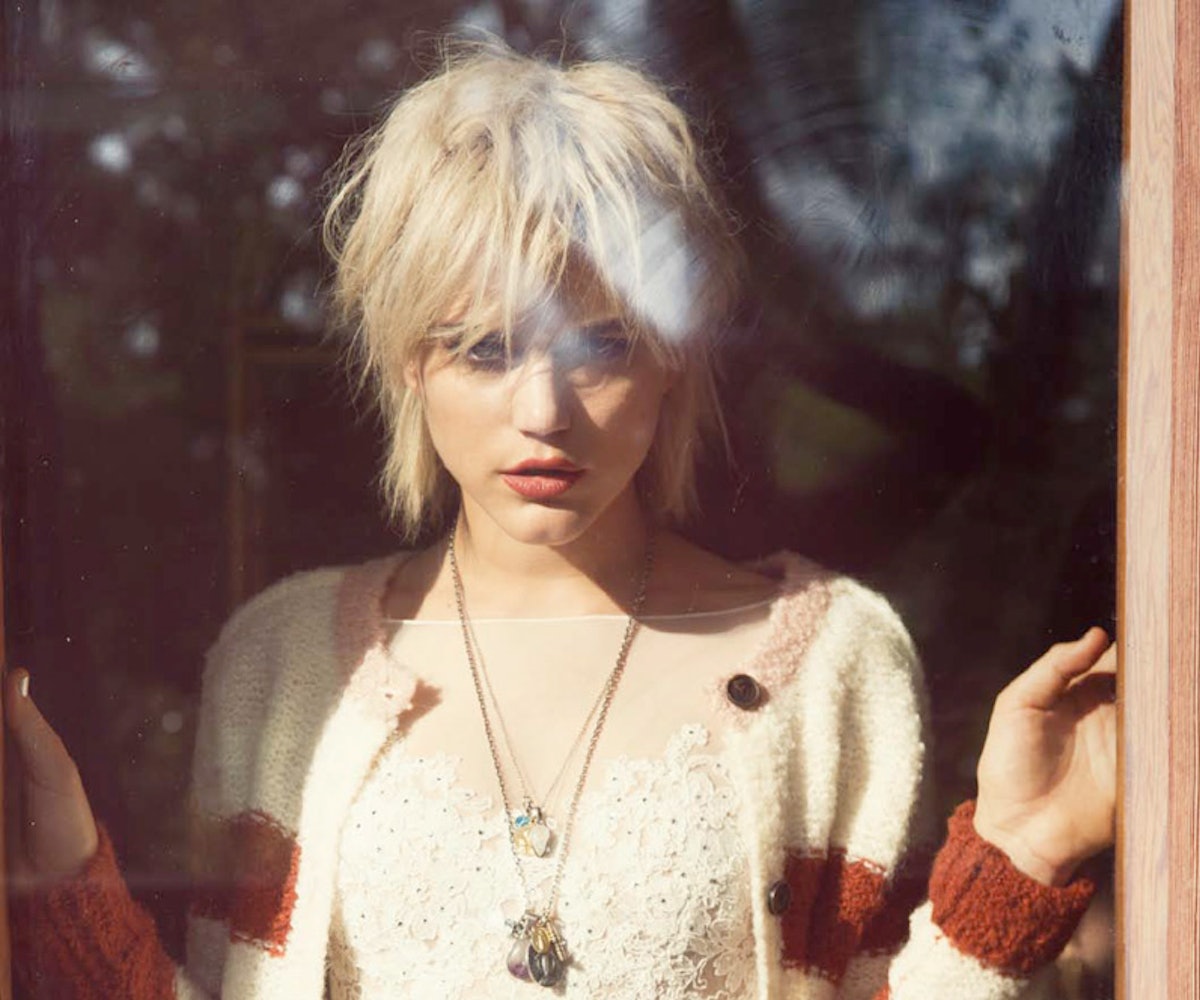 “I cry every day,” says Soko, blinking her orange-flecked hazel eyes. She’s talking about baring her emotions for the camera, but even here, sitting cross-legged on an outdoor couch in Los Angeles’ Mount Washington neighborhood, the Bordeaux, France-born actress looks on the verge of tears.

The blurred boundary between Soko’s art and personal life extends to her music—post-punk brood-rock delivered in the same gravelly tenor as her speaking voice, forever sounding one short breath away from collapse. Her sophomore full-length, My Dreams Dictate My Reality, out March 3, is a stripped-down tribute to oldschool indie rock, with raw vocals, bruised guitar riffs, and chugging percussion. Produced by Ross Robinson (The Cure, Slipknot) and featuring cameos by Ariel Pink and Warpaint’s Stella Mozgawa, it’s a refreshing wash of unveiled sentiment and harsh feedback. As Soko puts it, “When I’m on the microphone, I’m vomiting emotions.”

The platinum, moppyhaired singer (née Stéphanie Sokolinski) has been nomadic since she left home for Paris at 15 to pursue acting. After stops in London, Seattle, and New York, the now 29-year-old landed in Los Angeles, where she’s bounced around for the past few years, rooming with friends or staying at her producer’s recording studio. “I didn’t want to have responsibilities other than making music, touring, and going on adventures,” she says. It was during this period that she recorded her popular stream-of-consciousnessesque track “I’ll Kill Her.”

Between coping with the loss of her father at age five and supporting herself in her mid-teens, Soko’s had to grow up fast, but you don’t get the sense that her youth is far behind her. Not only does the petite beauty still get carded, her look today is especially gamine: a mustard buttonup, an oversize moto jacket, a Mondrian-inspired skirt she found at Goodwill for $3, and a pair of frilly white socks with Mishka creepers. “I was always the weird bird,” she says, fidgeting with her layered silver chains.

The singer’s expressive vulnerability was one of the reasons she landed the voice role of Isabella in Spike Jonze’s Her—that and the fact that she’s friends with the director. “I had to do a lot of crying and bring up the drama—he knows I do that really well,” she says with a laugh.

We asked Soko to roam the SoHo streets and barrage innocent passerbys with questions about their last kiss. It's hilarious, funny, and, of course, adorable.

Soko’s current source of real stress: deciding whether she’s going to self-release her new album in America or keep searching for a U.S. label. She had her pick of majors earlier this year after accidentally breaking the top 10 with “We Might Be Dead by Tomorrow” from her 2012 debut album, I Thought I Was an Alien. The fragile love song backed L.A. fashion label Wren’s “First Kiss” video—and played a big part in its going viral. “I had all of these labels wanting to sign me for the wrong reasons,” says Soko. “It was exciting, but it’s the Internet. You’re high one day and the next you’re nobody again. I’m not attached to things like that.”

Instead, she’s putting her energy into making a home in Los Angeles. Her first planned purchase? A record player. “I’m going to get all of my favorite albums on vinyl,” says Soko. “The Cure, The Smiths, Nico, Velvet Underground, Talking Heads, Wire, The Clash, Ramones—all the classics.”