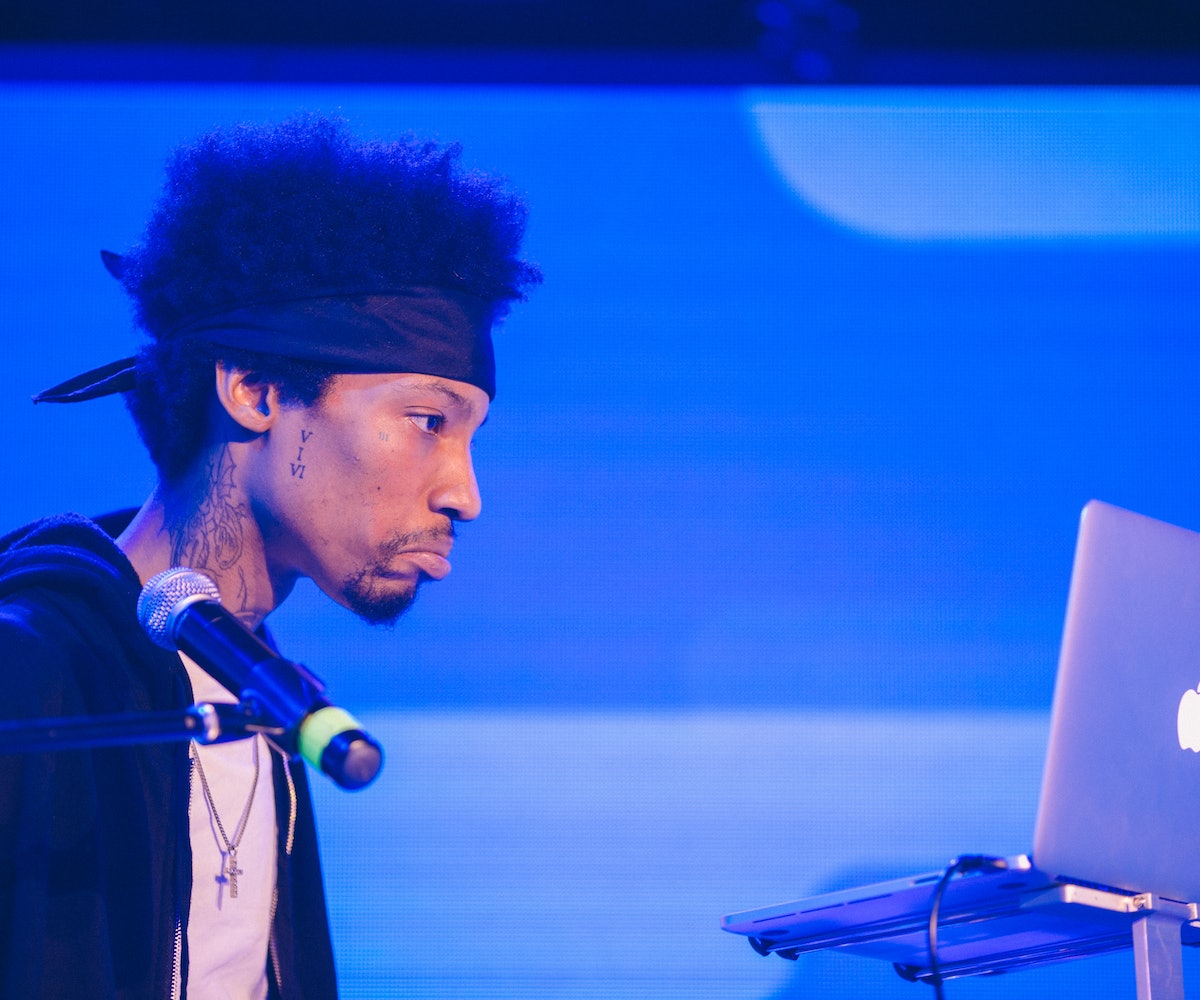 If you don’t know Sonny Digital’s name, you definitely know his work. The Atlanta-based producer is the mastermind behind some of the most popular songs out of his city, namely YC’s “Racks,” Future’s “Same Damn Time,” and ILoveMakonnen’s “Tuesday.” It’s no surprise, then, that he was tapped to perform at Bud Light’s Crew HQ in New Orleans during NBA All-Star Weekend, where he played a DJ set at the venue outfitted with throwback jerseys, an ode to the history of the sweatband in NBA uniforms, and a VR setup that encouraged guests to engage in a friendly free-throw competition.

But whereas other producers of Sonny’s ilk are easily recognized, he has remained more low-key—whether or not he has intended to. Case in point: The digitized voice that says his name for his signature drop is absent from 2 Chainz and Kanye West’s “Birthday Song,” leaving him relatively uncredited for one of his most popular tracks, which is especially disappointing considering his early support of some of the most famous faces in rap today. It’s pretty safe to say that he’s underrated. (Well, not “safe” per se—when I mention this to him, he agrees so passionately that he knocks my recorder out of my hand.)

All hope is not lost, though: Such incidents have inspired him to take his career into his own hands as a rapper, starting with his debut mixtape, G.O.A.T., released in September of 2016. Here, we catch up backstage at the Bud Light Crew HQ to discuss his foray into rap and why he prefers working with friends, and he sends us on a Google hunt to figure out how he discovered his latest signee.

What made you decide to step behind the mic more recently?

There’s a lot of reasons. I didn’t want to be a producer for other artists anymore because it felt like I was working for them, and I didn’t want to feel like I wasn’t the boss. I never worked for nobody else in my whole entire life. And, as a producer, I have to wait for the artist—I don’t like waiting. I like to move when I like to move. But I feel like a lot of major artists don’t respect me, though. They ain’t my friends, that’s the bottom line, and personally, I like to work with my friends. Everybody who I took off with has always been somebody that nobody knows. I always started shit, and it was more so with my friends. But the whole producer thing is my nine-to-five in my eyes, and rapping is where I get to have fun with this shit again. Producing is cool, the money is cool, but it just don’t give [that feeling] to me no more. I told people if I could find an exit route out of the music industry, I’d take it because I feel like I got stuck in it.

On “First Call,” you talked about not getting much recognition for producing 2 Chainz and Kanye West’s “Birthday Song,” and getting cropped out of the music video for it. What made you decide to air that out?

I felt like I did a lot for the industry and wasn’t getting credited for it properly. But my whole [career] strives off of fucking with the new people. That’s when I have fun with it: working with the new people, who actually appreciate me and the time working with me as a producer. Niggas in mainstream? That’s where I start feeling less appreciated, and that’s why I started to rap because I didn’t have a voice. I couldn’t let y’all know that I produced “Birthday Song.” 2 Chainz wasn’t going to say it. Kanye wasn’t going to say it. When I was in the video, they cut me out. In “Same Damn Time,” they weren’t showing me.

I’m still producing. I did some shit with G-Eazy, but I’m more so working on my new label, Rollin Records. I’ve got an artist I’m working with, Black Boe, and a gang of producers. My first project is actually done, but I only produced one song on there. It’s probably the hardest one. [Laughs] I’m the best producer, I swear to god!

So how is your creative process like when it comes to rapping?

I just have people send me beats, and I go through them but, real shit, when I find a good song, that’s the interesting process. When I find something I actually like, I’ll start chopping it up. The way I do my songs, I piece them together like I do to a beat. I’ll do one straight line of just me freestyling and one line of me doing ad libs, and I’ll listen to it over and over again, and come up with more words, or a hook. Then I’ll start chopping it up and moving stuff around. Even the beat, too. But, like I said, a lot of the beats aren’t mine, so I just have the MP3 with just the two tracks, so I can’t go crazy. But I chop that up, move it around, make my verses how I want them. I freestyle everything, too.

No writing at all?

No writing. It’s not the fastest process, I can’t act like I’m just knocking songs out as quick as I make beats. I take my time with the songs because I’m not as confident of an artist as a producer, so right now, I want to take my time with it and make sure that it’s the best that it can be in my eyes.

But I’m not looking forward to making songs fast, either. When I make a next-level beat that sounds like, “Damn, you took your time on this,” maybe I did take my time with it. The music I make just takes time.

Can you tell me about who you’ve got signed to your label?

Right now I can tell you about my boy Black Boe. We’ve been doing songs together. The latest one is “My Guy.” That one’s been going dumb.

How did you find him?

Do you know Travis Porter?

Start there. I’ll let people do their research.