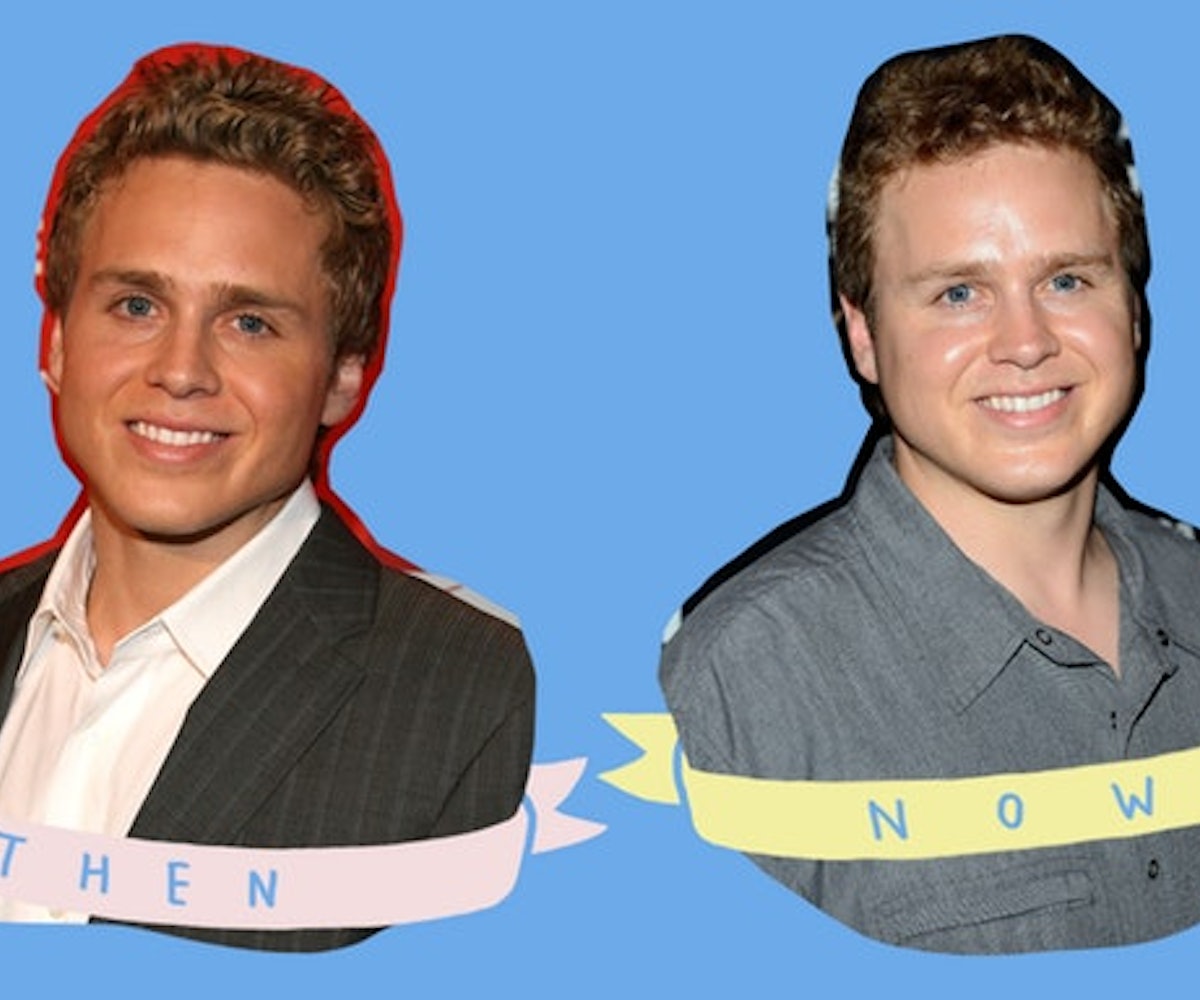 Spencer Pratt's been carrying around moldavite since the beginning of 2017; he says the crystal is what's been helping him get by. (And Pratt loves himself some crystals.) It's no wonder, then, Pratt's seen a gradual resurgence of publicity. Moldavite is said to be a crystal of greatness, one that facilitates positive change in the wearer's life, bringing good luck and realized goals. And for Pratt, it's fame that has been and, as I learned, will always be, a primary goal.

Ten years ago, Pratt wasn't married to his then-girlfriend Heidi Montag. He was the villain on MTV's The Hills, courting as many tabloid pages and covers as possible. 2007 was a fascinating time for the famous, those who wanted fame, and those who merely consumed it. It was the peak of a certain kind of tabloid-centered celebrity culture; it was also when the bubble would burst. The paparazzi machine was firing on all cylinders, and reality TV stars, like Pratt, were the ones fueling it.

Now, the game is different. Whether they'll admit it or not, everyone has a brand and a way to market it. Likes, retweets, and shares are a form of currency just as they are validation. "It's overwhelming," Pratt tells me. "Now the famous-for-being-famous category is so broad." Indeed, social media has given a platform to anyone with a Wi-Fi connection, which has its positives and its negatives. "I was talking with a network the other day about a TV show I pitched and realized how quickly these kids rise," Pratt says. "These execs didn’t have a clue who I was talking about even though these kids get millions of views and all these companies want to do sponsored ads in their Instagram stories. That would never happen in 2007 because the fame pool was small."

What was that fame pool like? It's become de rigueur to reflect on arbitrary cultural moments on particular anniversaries (five years, 10 years, 15 years...), but the zeitgeist of 2007 was such a force of pop cultural, reflecting on it is as necessary as it is inevitable. Broadly, we haven't changed that much. Tabloid culture is still the same, only it's immediate, and everyone is a paparazzi. On a smaller scale, though, fame is completely different. It's rapid, rabid, and those covetable 15 minutes fly by fast.

Yet Pratt is having a renaissance, due in part to nostalgia and his firsthand knowledge of celebrity, but also because he's a no-bullshit kind of guy. As evidenced in our conversation below, Pratt keeps it real. If authenticity is what we collectively crave (and we do), then Pratt is serving it up gleefully. There's no telling what heights he'll reach by the end of the year if he keeps that moldavite around.

Could you describe what was appealing about being a celebrity 10 years ago as opposed to today?

Everyone is a celebrity now. Everyone has some social platform they’re starring on and editing and putting music to. Ten years ago, regardless if you were famous for being famous, it felt like real fame.

Back then, you were either on a television show or you were in all the tabloids, and those were the two ways you could find fame unless you were a well-known musician or actor. There was nothing else; you were either famous for a tabloid picture or you were on a reality show. I’m definitely not hating on these new people. I’m very jealous of all the views that all these people get on their platforms.

Did your viewpoint on fame and your approach to celebrity change after all public meltdowns started happening, after Britney shaved her head and all these other tabloid queens started to fall from their pillar?

I related to it. You can become addicted to taking as many pages of the tabloids out as possible. Maybe it was just a competition I made up in my own head, but I feel like 2007 was about these big names trying to get the most covers, the most pages printed. I remember thinking, I’m just gonna do this thing because it’ll make me more famous and I’ll get more paparazzi. It’s how the paparazzi worked in 2007; the crazier you looked and acted, the more attention you’d get, the more coverage, the more fame. It made you feel like you were doing the right thing even though you knew you were losing a bit of yourself.

No one understands how valuable it was to be on the cover of those magazines and land on those all-access evening shows.

Just being featured on Entertainment Tonight, Access Hollywood, and the Extras was such a big deal because there were no blogs, no apps. Those were exposure. Now, A-list stars don’t even want to do interviews because they can just post their thoughts from their phones.

What would you say has been the most rewarding aspect of your journey?

I would say, right now, still being able to land the cover of Us Weekly. If you told me in 2007 that in 2017 I would be on a cover of Us Weekly for anything I would have said, god bless you. I was very depressed when Prince Harry and Meghan Markle replaced us on the stands.

If present day Spencer could give the ghosts of Spencer’s past any piece of advice, it’d be...

Turn up even harder. I feel like I was pacing myself. As frantic as I may have looked, I still feel like I could’ve done more. I should have just hit the nitrous on them.

Do you foresee your approach to fame and celebrity changing once the baby is born?

No, because the one thing I realize in my current level of infamy, as we’ll call it, is that people feel like I’m refreshing. I acknowledge my thirst for celebrity. Obviously, I love paparazzi; obviously, I love being in tabloids. I feel like there are so many people that are in tabloids that would never say that out loud. I feel like I’ve accepted where I am. I’m a realist. So no, I feel like, if anything, I’m going to keep doing me. I think that’s what’s going to continue to set us apart and, hopefully, continue to make people interested in us, so we don’t feel like cookie-cutter, filtered images.

NEXT UP
A Night Out
A Night Out With Rachel Bilson
Beauty
No One Does #PamCore Beauty Better Than Pamela Anderson, Herself
Beauty
Starface’s Newest Pimple Patches Make Great Valentines
Entertainment
Boygenius, LCD Soundsystem & Steve Lacy Are Headlining A Summer Concert Series
Style + Culture, delivered straight to your inbox.