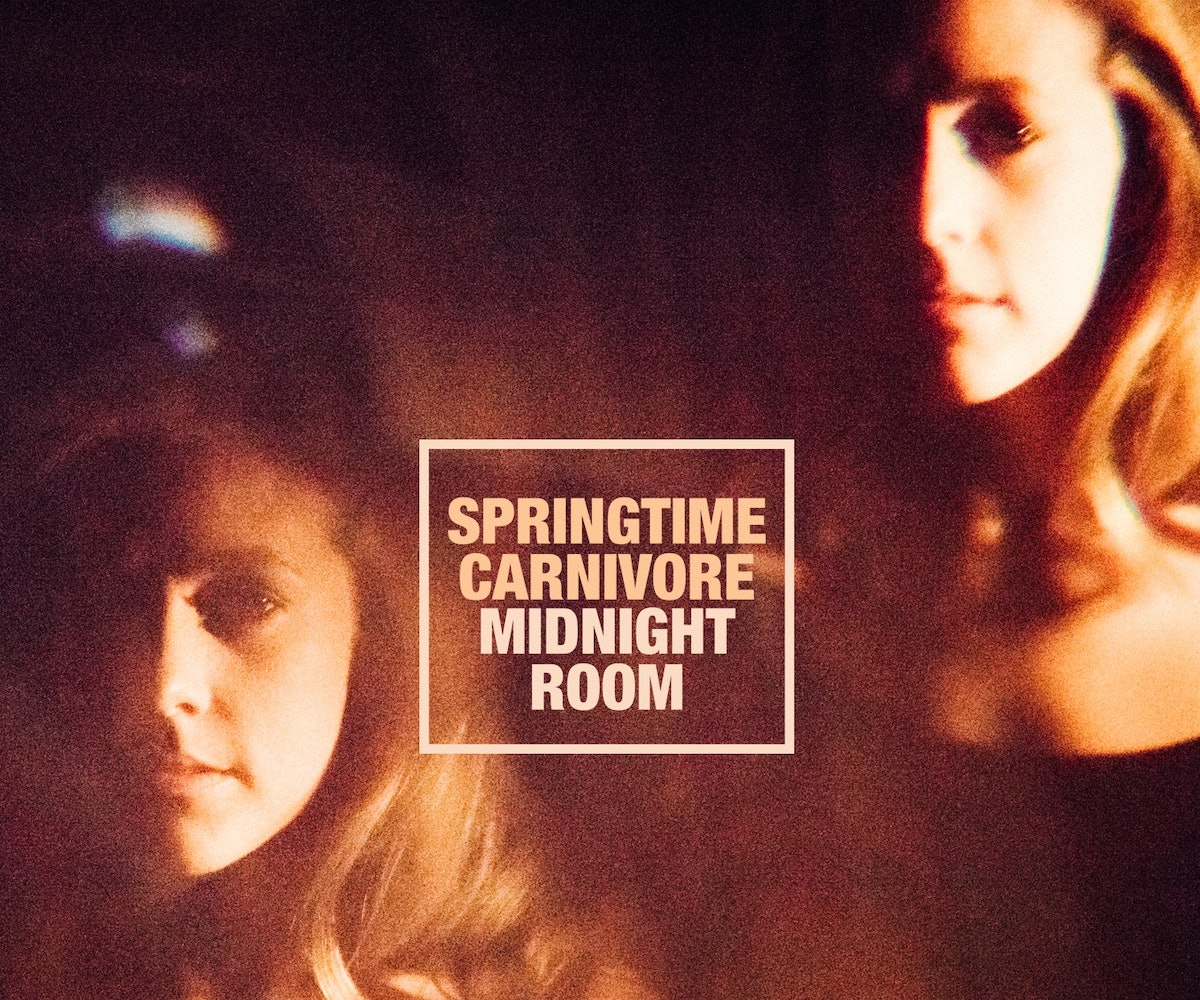 Greta Morgan has been making waves in music ever since 2005, when she could be found at the helm of scenester band The Hush Sound as their pianist/vocalist. Although that band hasn't officially broken up—they are part of the ranks of bands on an indefinite hiatus despite touring together this summer—little has been released since their last album came out in 2008. Durging this musical drought, Morgan has shifted her focus to dreamy pop music under a new moniker, Springtime Carnivore.

Although producer Chris Coady (Yeah Yeah Yeahs, Beach House) worked with Morgan in the recording of this album, it's clear that it is something that belongs entirely to her. Morgan's piano skills are blatant in the synthy melodies she's created to pair with her reverb-heavy vocals, creating a hazy, warm vibe.

The single "Raised by Wolves" made a splash on music blogs after it dropped earlier this summer, and the rest of the album has the same vibe. Not quite lo-fi but never quite clear, Midnight Room feels wistful and nostalgic all at once.

We were lucky enough to get a hold of Morgan for a rundown of how the tracks came together on the album. Get the full context while you stream Midnight Room, below.

When Chris Coady and I were nearing the end of our studio time, we tried to sequence the 10 songs we'd recorded and realized that none made sense as an opening track. He told me to go home that night and write the opener. I stayed up very late writing in my bedroom, which is decorated with various shades of midnight and baby blue, so the bridge lyrics, “I see you now/blue on blue/my illusion,” was a direct result of looking around the room while singing. A “Midnight Room” is the metaphorical place that the whole record came from—it represents the feeling of waking up alone in the middle of the night and hearing nothing but your own thoughts.

"Face in the Moon"

I wrote this song in a 15-minute flash after a week of sleepless nights watching space conspiracy documentaries and listening to Bruce Springsteen’s Nebraska and REM’s Murmur. I’ve had recurring dreams about a man who would sleep on a lawn chair outside my house and wake up with comets stuck to his clothes, so the lyric “You’re standing there brushing the comets out of your hair” was a direct result of that.

To me, it’s a statement for how I want to be treated by someone I love: “Don’t control me/ Don’t try to own me/ Don’t keep score/ And I’ll be waiting every night at your door.” It’s about the freedom required within devotion and also about the willingness to step into a stage of uncertainty with another person.

This song was a direct result of my “poem party” method of songwriting: I write phrases on index cards, cut them up, and then lay them on the floor in a random order. (I usually call this a “poem party” because it feels sort of ceremonial and I often drink some tequila or red wine while doing so.) I start to see patterns and pick out phrases that make sense together. From a production standpoint, this feels the most like a Chris Coady production to me… It makes the most sense sonically in a continuum of his work with Beach House and Future Islands.

This song changed the most from demo to final version. The demo was more of a loose rock and roll tune, but Chris suggested we do a total rearrangement and make it feel mechanical and drum-machine heavy.  He also really pushed for that guitar lead sound, which felt to me like a toy shop exploding and all the toys starting to chime at once. I was a little timid about the direction at first, but it came to be one of my favorite recordings we did together. Playing this one with the live band feels especially great because we blend the feel of the original demo version and the final album version.

This is the most personal song on the record. I narrate it directly to the person it’s about: “You can keep the polaroids where I am posing nude/ Even though I’m leavin'/ I’ll always trust you.” It feels to me like a letter I would write that feels too personal to actually mail.

I’ve had a series of recurring dreams where members of Fleetwood Mac whisper unreleased songs into my ear. Usually, I just wake up with a vague idea or one lyric of the song as a residual from the dream, but this was a Stevie song that I woke up from and remembered the entire chorus. Chris and I used a Linn drum and Eurorack synth bass to build this one from the ground up. (Sidenote: There is another song that Christine McVie whispered to me years ago that I’ve never finished… Maybe for the next Springtime Carnivore record?)

I wrote this song after night of recording with Katy Goodman for our “Take It, It’s Yours” record last fall. The biggest takeaway from recording a covers record of punk covers was my sense of awe about the simplicity of those tunes. We had just tracked Gun Club’s “Sex Beat,” which has the same chords the entire way through and I wanted to write a song that did the same thing and accompany it with simple, clear lyrics. Ta-da: "Wires Crossing" was born.

This is the only co-write on the record, and I wrote it with my friend Tommy English. Tommy and I had spent eight hours slogging away on an idea that wasn’t working, and when he left the room to grab a cup of coffee, I started goofing around on the piano and humming the lyric, “Don’t even say you’re turning around again…” He walked back in the room and heard what I was playing, and we finished this song entirely in less than 20 minutes.

One of the opening lyrics of the song is, “Every time I said your name/a field of roses blew up,” which came to me because I had been taking a meditation class last fall that used creative visualization as a way of clearing energy. One thing they do is create symbols with which you gather emotion and energy, then visualize destroying them. A rose is a very pure symbol that was used often in the class, so this lyric to me was about the creation and destruction of emotional energy.