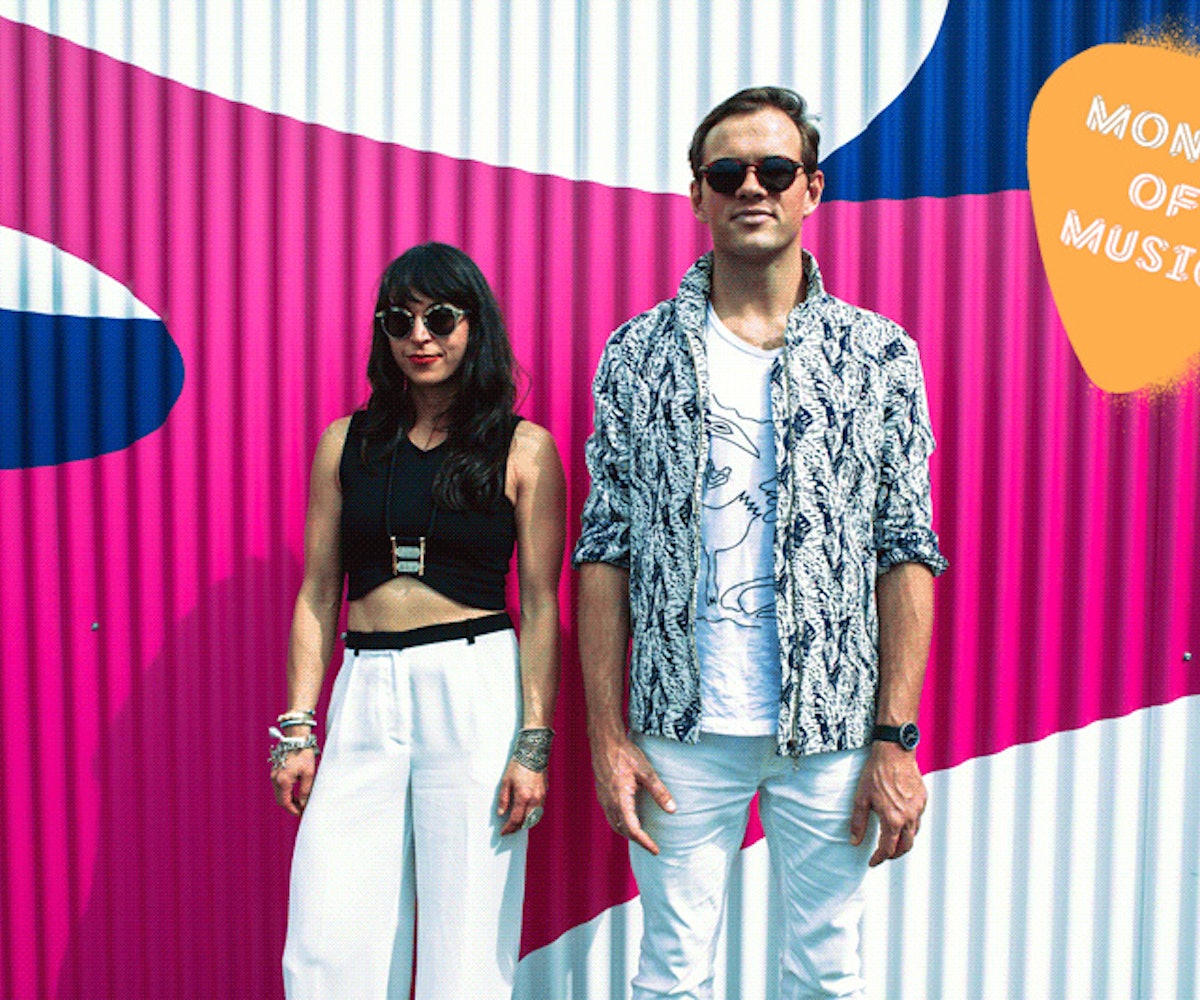 Last year, Spotify and music psychologist David M. Greenberg created a playlist perfect for beginning your mornings. St. Lucia's "Elevate" was second on the list, right after Coldplay's "Viva La Vida." Matter, St. Lucia's second album, is just as mood-enhancing. And who can argue? With shimmering synths and beats that bop, the dread of a coming day doesn't seem so bad. Even at St. Lucia's slower moments, there's still an optimism pulsing through their music. It's an optimism that's more blissful than happy-go-lucky. With St. Lucia, anything seems possible—even working with Grace Jones. Just ask St. Lucia's Jean-Philip Grobler and his wife, Patti Beranek. Get ready to wake up to their songs.

Patti Beranek: I think it’s the rhythm and something else scientifically. But this was getting up out of bed, not getting ready.

JG: Yeah, but it still pumps you up.

JG: Me time is normally like, chilling out… so “Out Tonight."

PB: I think so. “Physical." Getting down, getting freaky.

JG: But that’s not sexy.

PB: That’s true, but if you want to get ready for a night out as a girl, then I think you need that beat.

JG: I get starstruck fairly easily, but normally I get starstruck by people I admire—it’s not necessarily just fame. I remember I used to and still am into this band from Denmark called Mew, and before St. Lucia, they were playing in Williamsburg [in Brooklyn, New York]. We went to see them, and we went to this bar afterward, and they were there. I was, like, so nervous that they were there, and I got Patti to go up to them and give them one of my old EPs, from my old band. I was so nervous.

JG: Yeah, I was very starstruck.

JG: Dude, we saw her at the Hollywood Bowl last year, like a week after we played with Empire of the Sun. She destroyed.

PB: Destroyed every one of us on stage. She showed us all how it’s done. She’s amazing.

She was at Afropunk fest last year. She had like this body paint…

PB: And she’s how old? Like 67? [Editor's note: She is.] She was topless and hula-hooping with body paint on, and she’s just like, “I can do this and sing at the same time.” The whole time she was hula-hooping and singing. She’s incredible. I want her to cover a song of ours.

PB: I think Jean had no choice. [Laughs.] I think, even if you try and do something else, it’s always music. There’s no choice.

JG: Yeah, but I think it was probably like when I was a kid—when I was a baby in a pram—my mom put me in front of South African MTV and I would just watch music videos. The one that stuck in my head was “Dancing on the Ceiling” by Lionel Richie, which isn’t my favorite Lionel Richie song now, but that whole thing and how theatrical it was got into my bones.

PB: I can’t remember a moment where I was just like, “Oh, this is it now. I’m going to do it.” I think it has always been a part of me, so I just went for it.

PB: Depends on the day!

PB: I love how your winding down involves alcohol.

JG: But on tour, it generally does! It’s just there, you know? Otherwise, you’re kind of just like “Ehhhhh.” Which obviously there’s a lot of days like that too.

NEXT UP
Entertainment
TSHA On 'Capricorn Sun' & Searching For Euphoria
Entertainment
Soccer Mommy, Wet Leg, & 48 More Artists Made An Album For Abortion Rights
Entertainment
Tove Lo Announces 2023 Dirt Femme Tour
Entertainment
Paramore's "This Is Why" & 9 Other New Songs Out This Week