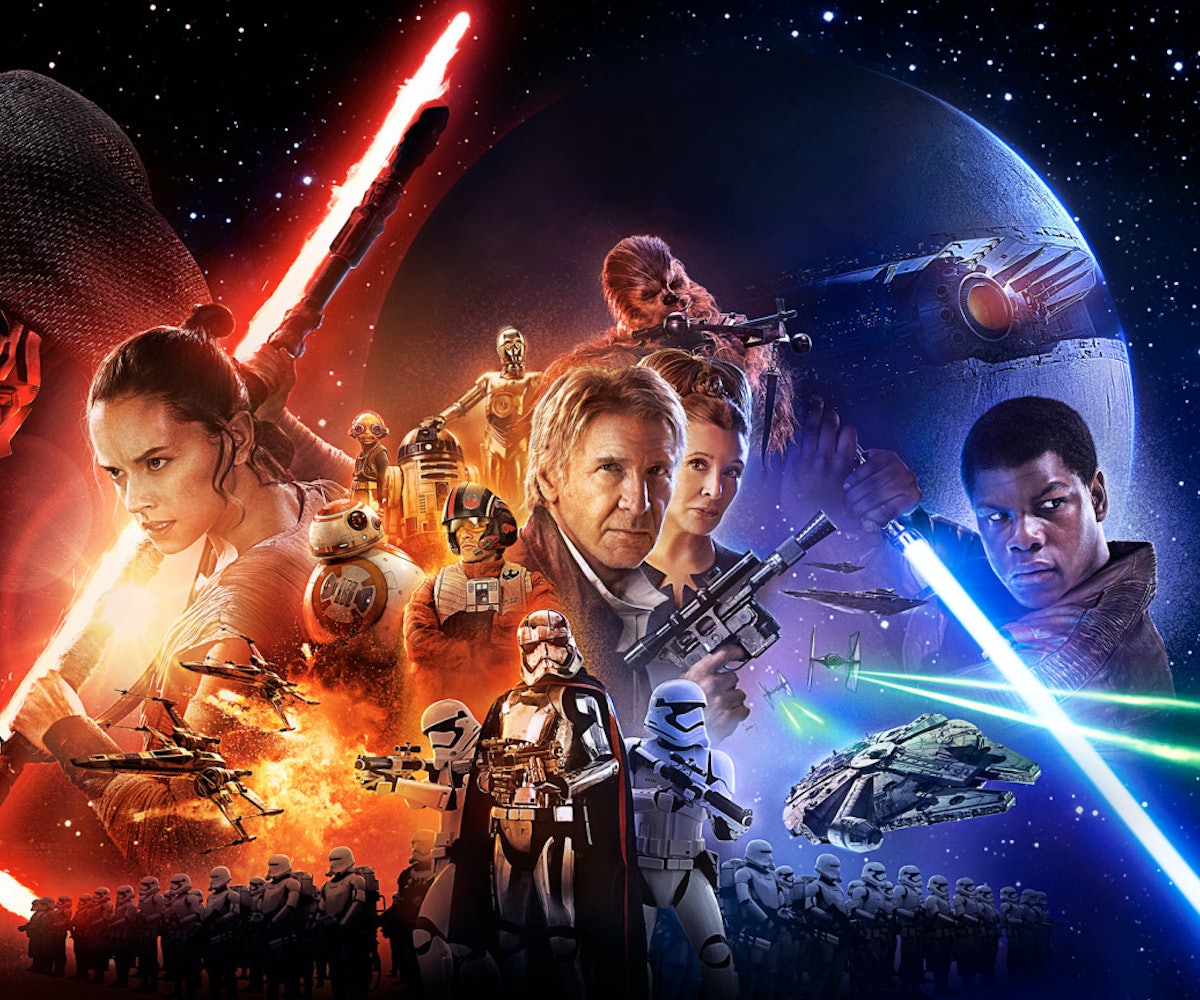 When I sat down in the theater, a room packed with nervous energy, attendees chattering anxiously, having been required to remove their phones and devices, I wrote down one question in my notebook: Is this worth it?

Because that's really the question J.J. Abrams is tasked with as The Force Awakens chugs into theaters. Is this worth the hype, the reports, the speculation? Is it worth Harrison Ford dusting off his old holster and stepping back into Han's shoes? Is it worth Disney's purchase of Lucasfilm, which includes the unfortunate inheritance of a legacy which is marred by Jar Jar Binks and midichlorians? Is it worth rousing the old, massive, passionate-but-ornery beast of a fandom, cajoling it into action and also risking its wrath?

In short, with no spoilers or exposition, the answer is yes. It's totally worth it. Go see it, it is precisely what you are hoping it is—which would be, I would guess, a legitimate addition to the Star Wars pantheon. That's the economic answer. That's for people who do not want to know more.

However, what is most interesting, and the reason Abrams feat is a success is because he ventured to wonder why it's worth it. Why is it worth reviving such an unwieldy franchise? This answer is also fairly easy: He respects his audience. Hell, he reveres his fandom. The Force Awakens feels like a love letter to the originals (read: IV, V, VI), one that basks in the world it has inherited, seeking only to enrich it, not expand it or dismiss its strange, obsession-igniting lore.

In fact, it is almost as if the scriptwriters turned to the originals and highlighted what worked: Dry, roguish humor (which was so lacking in The Phantom Menace); quirky and empathetic droids; perfectly timed Wookiee grunts; even a wide-eyed innocent on a rescue mission. Heck, Abrams kept the incredibly outdated-but-nonetheless-effective swipe fades.

But, it is within its simplicity—which is the crucial element he embraced that the latter-day prequels did not—that The Force Awakens really nails its landing. For instance, a space opera where a little boy is a chosen one and also a part of a power struggle which takes place amidst an intergalactic senate comprised of double-dealing and space politics, all helmed by a shady senator who is also propping up a clone army, and also a love story (we guess?) is an awfully big mouthful. A boy who finds a mentor to help him try to save a princess from a scary man is a much, much simpler story, and the plot of Awakens isn't far off from that—and can also be summed up in just a sentence or two.

The other learning that Abrams smartly applies is economy. We don't need that many characters: Three baddies, four goodies, some familiar faces, and a droid will suit us just fine. That's why, even though the newcomers don't get the courtesy of an Uncle Owen/Aunt Meru backstory, they still feel dimensional. Which, of course, owes a great deal to Awakens' ingenious casting. Instead of puffing up the film with household names, the Emma Stones or Chris Hemsworths, Abrams and Co. mined rising indie stars like Domhnall Gleeson, Gwendoline Christie, and Oscar Isaac (who, at this point, isn't indie but his habit of only taking really, really good roles gives him a certain gravitas) as a part of his new class. And then there is John Boyega, Daisy Ridley, and Adam Driver.

Adam Driver, for one, is darkly charming as Kylo Ren, a petulant baddie who is given more emotional fodder than Vader ever was—and that includes the pre-Vader Anakin. But it's no spoiler to say that Boyega and Ridley, both British actors who were relatively unknown to Yankees prior to their casting, carry the film. They banter and joust like Han and Leia, except they become the perfect audience surrogate: When they share the screen with the "greats," their job is to stay reverent and impressed that the likes of them gets to hang out with Han Solo and General Leia.

Yes, General Leia, because there is no room for princesses in this world (even though Threepio can't drop the "Your highness...," naturally). The Force Awakens marks the first time we get to see a woman in a lightsaber battle, and—to be quite honest—it's a real thrill. (In fact, the swordplay of the film draws on George Lucas' original inspiration, Akira Kurosawa's The Hidden Fortress, with the battle scenes occurring in naturalistic settings, not the weird Zaha Hadid backdrops of the newer films.) It's in this attention to detail, this obsessiveness that fans bring to their love of the series, that Abrams shares. And it's where he succeeds, too.

The Force Awakens dismisses the real-world dynamics that come with including a black man and a woman as the lead of an action flick. Issues of gender, race, and even, um, humanity have never been addressed in the Star Wars world, but here, the cast's diversity feels natural and fitting. What it doesn't dismiss, however, is the in-world symbolism that the film so seriously respects. Abrams knows the power of first showing us the Falcon. He understands the charm of letting Harrison Ford unleash his half-cocked smirk. He knows the need for fan service and the film understands that, hey, we've been burned before. But, alongside these nice moments of nostalgia and wonder, there is a new group of vagabonds who might never be as compelling as Luke, Leia, and Han, but they sure do try.